Clinicopathologic significance and prognostic value of Ki-67 expression in patients with gastric cancer: a meta-analysis

Materials and Methods: Several electronic databases were searched for eligible studies. The pooled odds ratio (OR), hazard ratios (HR) and 95% confidence interval(CI) were calculated to explore the prognostic value and clinicopathologic significance of Ki-67 expression for disease free survival and overall survival.

Gastric cancer (GC) is the fourth malignant tumor and the second leading cause of tumor related death in the world [1]. Patients with advanced GC has only a median overall survival (OS) of less than 12 months [2-3]. Therefore, there is an urgent need for reliable prognostic factors to predict poor prognosis and to subdivide different risk stratification for management of GC patients.

The initial search returned 595 articles (with 75duplicate articles). After screening the abstracts, 445 irrelevant articles were excluded. Reviewers identified 75 potential studies for full-text review and 46 articles were eliminated due to inadequate data. Finally, 29 studies were included in the present study [5-33]. The details of screening process were shown in Figure 1. 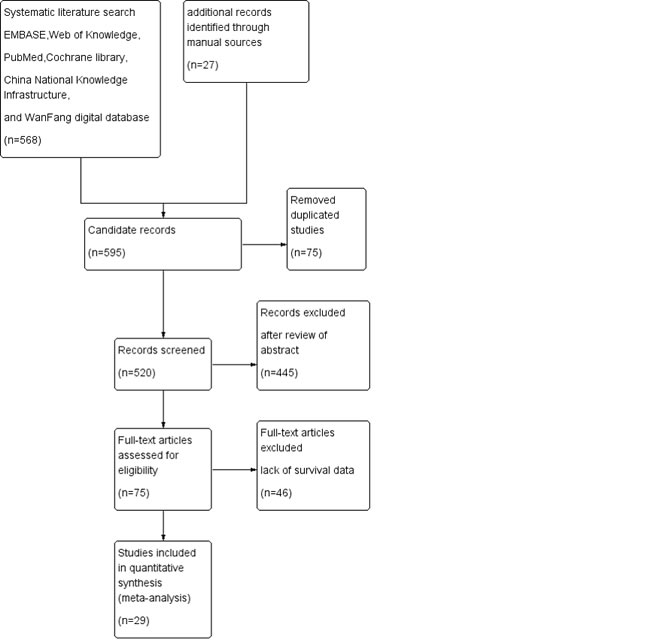 The characteristic of included studies were summarized in Table 1. The publication time of included studies was between 1996 and 2016.The study sample size was between 56 and 693, with a mean sample size of 193. The NOS score of 29 studies varied from 7 to 8, with a mean value of 7.73. Twenty-three studies provided survival information and fifteen studies presented clinicopathologic parameters.

Table 1: Characteristics of studies included in the meta analysis.

Table 2: Effect of individual studies on the pooled HRs of Ki-67 expression for overall survival. 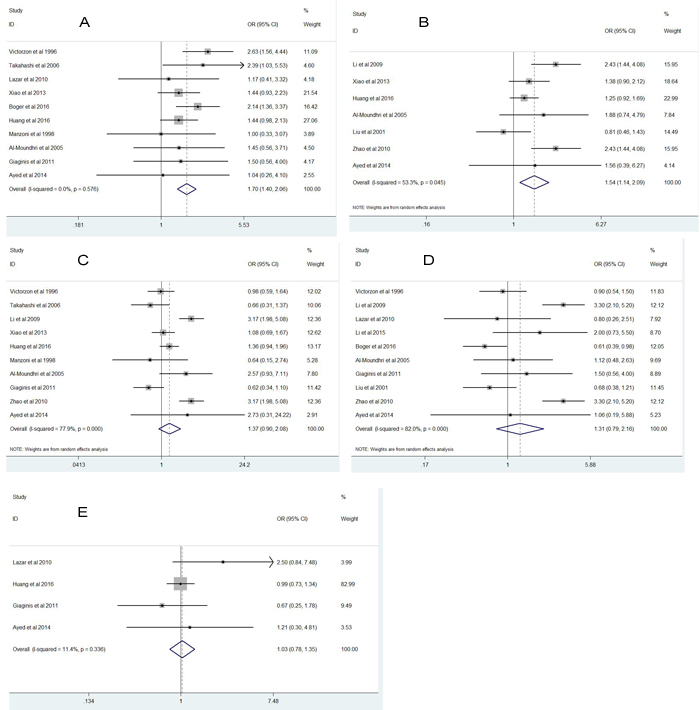 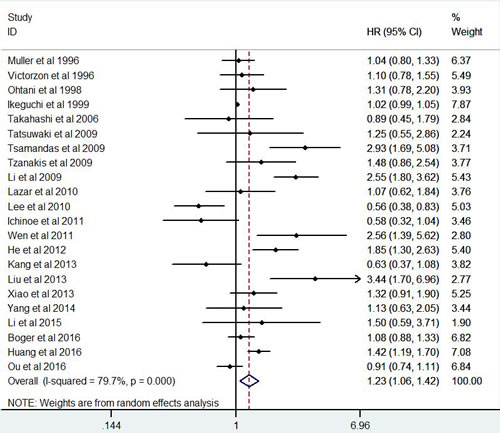 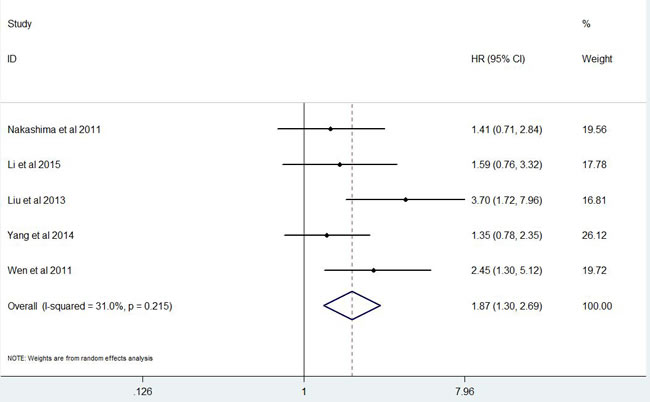 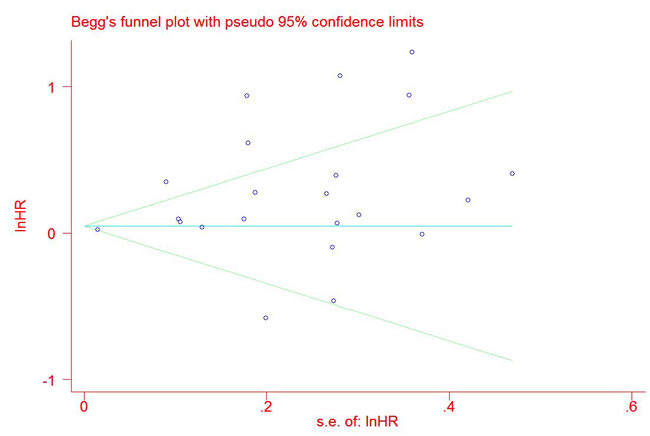 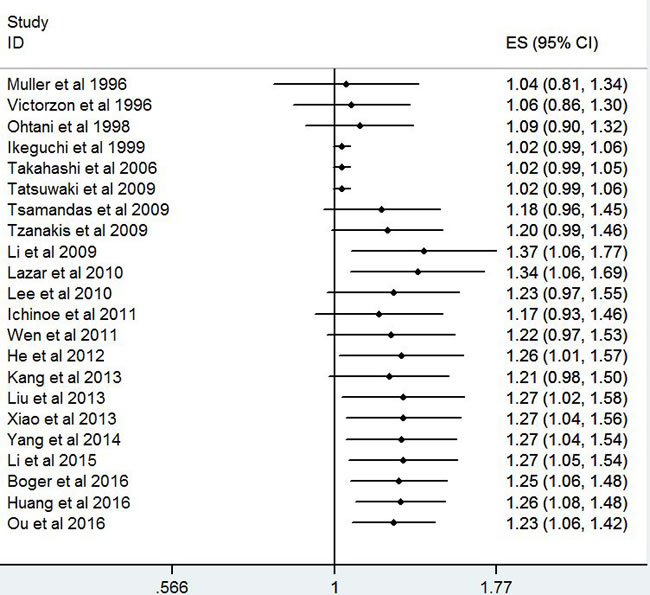 Figure 6: Cumulative meta-analysis for stability of the hazard ratios of Ki-67 for overall survival in gastric cancer patients.

Although significant heterogeneity existed in the present meta-analysis, sensitivity analyses and cumulative meta-analyses demonstrated that HRs of Ki-67 expression for prognosis of GC patients was stable and reliable. Furthermore, we performed Begg’s funnel plot and Egger’s test to assess the potential publication bias and did not find any evidence of publication bias.

The present meta analysis had several strengths: Firstly, we first explored the association between Ki-67 expression and clinicopathologic parameters in GC patients. Secondly, we included 29 eligible studies and 5600 patients, which could strengthen persuasiveness of the conclusions. Thirdly, Ki-67 expression in 29 eligible studies was all detected by IHC. Fourthly, studies published in Chinese were included as English literature to increase representation of study population.

The results of the present meta analysis need to be interpreted cautiously for several limitations. First, most studies defined positive status of Ki-67 expression according to different cut-off values. Second, heterogeneity was inevitable due to different baseline characteristics. Third, although the method for extracting survival information from survival curve is widely accepted, we could not completely eliminate the sources of information inaccuracy in the process of extracting data.

Several electronic databases, including PubMed, EMBASE, Cochrane Library, Web of Knowledge, China National Knowledge Infrastructure and WanFang data, were searched from January 1970 to May 2016. We performed literature search by combined text word and MeSH(Emtree for EMBASE database accordingly) strategy with terms “ Ki-67 Antigen” or “MIB-1 Antigen” and “gastric cancer” or “gastric carcinoma” or “stomach tumor” and “survival” or “outcome” or “prognosis” or “prognostic”. The strategy was correspondingly adjusted in different databases. In the retrieval process, expanded search of hyponym was performed. We made a manual search using the reference lists of the relevant articles. We contacted the corresponding author to get necessary information if necessary. The search was restricted to human studies, but there was no restriction on language or publication time. All clinical investigation and data achievement were conducted according to the principles expressed in the Declaration of Helsinki.

The following studies were excluded: (1) reviews, letters, case reports, and conference abstracts without original data; (2) non-human experiments;(3) laboratory studies;(4)articles from which the necessary information could not be extracted.

The statistical analysis was performed according to the guidelines suggested by the Meta-Analysis of Observational Studies in Epidemiology group(MOOSE)[34]. The pooled odds ratio (OR) were combined to explore the association between KI-67 expression and clinicopathological parameters. The pooled hazard ratio (HR) were used to summary outcome of overall survival. While survival data were not directly reported, we extracted survival information from Kaplan-Meier curve. The heterogeneity among different studies was measured by the Q and I2 tests. A probability value of I2 ≥30% and P < 0.1 indicated the existence of significant heterogeneity. A random effect model (DerSimonian and Laird method) or fixed effect model(Mantel-Haenszel method) was used depending on the results of heterogeneity analysis. The potential publication bias was assessed by Begg’s funnel plot and Egger’s test. P value < 0.05 was considered statistically significant. The statistical analyses were performed by STATA version 12.0 software (Stata Corporation,College Station, Texas, USA).

This study was funded in part by Health Department and Finance Department of Guangdong Province.

The authors have declared that they had no conflict of interests.