Association between the ERCC2 Asp312Asn polymorphism and risk of cancer

Cancer is the leading cause of death in economically developed countries and the second leading cause of death in developing countries. The relationship between genetic polymorphisms and the risk of cancers has been widely researched. Excision repair cross-complementing group 2 (ERCC2) gene plays important roles in the nucleotide excision repair pathway. There is contrasting evidence on the association between the ERCC2 Asp312Asn polymorphism and the risk of cancer. We conducted a comprehensive meta-analysis in order to assess the correlation between these factors. We searched the PubMed, EMBASE, Science Direct, Web of Science, and CNKI databases for studies published from January 1, 2005 to January 1, 2016. Finally, 86 articles with 38,848 cases and 48,928 controls were included in the analysis. The overall analysis suggested a significant association between the ERCC2 Asp312Asn polymorphism and cancer risk. Furthermore, control source, ethnicity, genotyping method, and cancer type were used for subgroup analysis. The result of a trial sequential analysis indicated that the cumulative evidence is adequate; hence, further trials were unnecessary in the overall analysis for homozygote comparison. In summary, our results suggested that ERCC2 Asp312Asn polymorphism is associated with increased cancer risk. A significantly increased cancer risk was observed in Asian populations, but not in Caucasian populations. Furthermore, the ERCC2 Asp312Asn polymorphism is associated with bladder, esophageal, and gastric cancers, but not with breast, head and neck, lung, prostate, and skin cancers, and non-Hodgkin lymphoma. Further multi-center, well-designed studies are required to validate our results.

Cancer describes a group of diseases characterized by the uncontrolled growth and spread of abnormal cells [1]. It is the leading cause of death in economically developed countries and the second leading cause of death in developing countries [2]. According to statistics, a total of 1,658,370 new cancer cases and 589,430 cancer deaths were projected to occur in the United States in 2015 [3]. In general, cancer is the result of multiple environmental and genetic risk factors, as well as gene-environment interactions [4]. Among genetic factors, genetic and epigenetic mutations, such as aberrant DNA methylation, can lead to carcinogenesis [1].

Recently, the relationship between genetic polymorphisms and the risk of cancer has been widely researched. Among the polymorphic genes, excision repair cross-complementing group 2 (ERCC2), also called xeroderma pigmentosum group D (XPD), plays important roles in the nucleotide excision repair (NER) pathway [5]. The ERCC2 gene is located on chromosome 19q13.3, comprises 23 exons, and spans approximately 54,000 base pairs [6]. It encodes an evolutionarily conserved helicase, which has ATP-dependent helicase activity within its multi subunit core transcription factor IIH (TFIIH). The helicase participates in DNA unwinding as part of the NER pathway, and plays an important role in the recognition and repair of structurally unrelated DNA lesions containing bulky adducts and thymidine dimers [7, 8]. Some studies have shown that ERCC2 polymorphisms may be related to reduced DNA repair due to a possible reduction in its helicase activity [9, 10].

There are two important single nucleotide polymorphisms (SNPs) in the ERCC2 gene. One is the Lys751Gln polymorphism, which has been shown to be involved in genetic susceptibility to some cancer types. Another common ERCC2 polymorphism in the coding region is Asp312Asn (rs1799793) [11], which is characterized by a G to A transition at position 312 in exon 10 causing an aspartic acid (Asp) to asparagine amino acid (Asn) exchange [12]. This polymorphism has been widely studied for its association with susceptibility to cancer including brain [13], esophageal [14–16], head and neck [11], bladder [17–19], and breast cancers [20–22]. However, the results reported by these studies were inconsistent.

To provide a comprehensive assessment of and to clarify associations between the ERCC2 Asp312Asn polymorphisms and the risk of cancer, we performed a meta-analysis of all the eligible case-control studies. 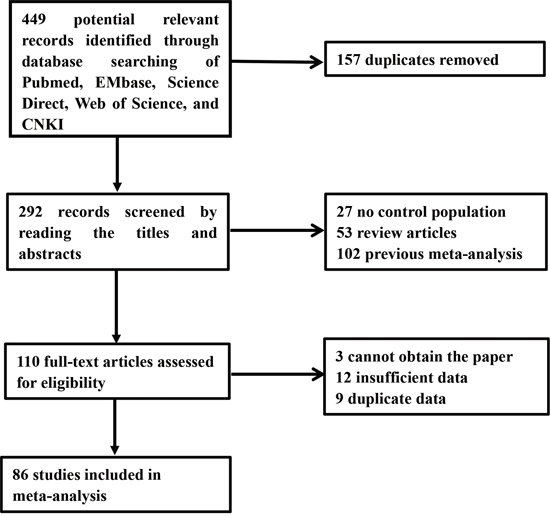 Table 1: Characteristics of the case–control studies included in the meta-analyses

a Country of first author.

a P for heterogeneity.

We used the Begg's funnel plot to estimate publication bias. There was no statistical evidence of publication bias in the overall analysis under each model (Figure 2). Table 2 shows the P details for bias. We also removed studies one by one to determine their effect on the test of heterogeneity, and evaluated the stability of the overall results; the results did not change in the overall analysis (Supplementary Table 1) neither in other analysis. 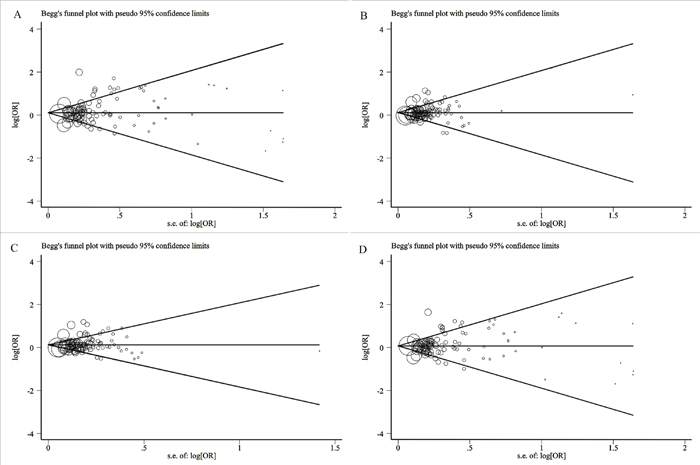 In the overall analysis for homozygote comparison, the required information size was 72,622 patients to demonstrate the issue (Figure 3), and the result showed that the Z-curve had crossed the trial monitoring boundary before reaching the required information size, indicating that the cumulative evidence is adequate and further trials are unnecessary. 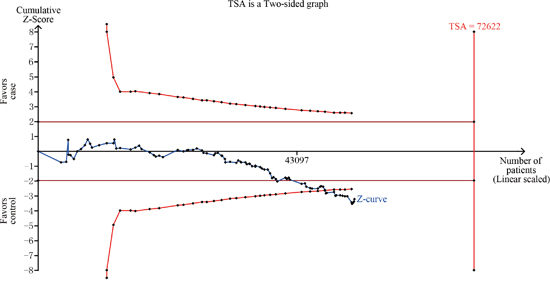 In our meta-analysis, the association of the ERCC2 Asp312Asn polymorphism with the risk of cancer was evaluated in 38,848 cases and 48,928 controls. A significant association was observed between the ERCC2 Asp312Asn polymorphism and overall cancer risk in all genetic models. To the best of our knowledge, this is the most comprehensive meta-analysis on this topic until now. Moreover, the result of the TSA indicated that the cumulative evidence is adequate and further trials are unnecessary in the overall analysis for homozygote comparison.

In the subgroup analysis based on ethnicity, a significantly increased cancer risk was observed in Asian populations, but not in Caucasian populations. One possible reason for these discrepancies is that different ethnicities may have distinct genetic backgrounds, and therefore, tumor susceptibility can be influenced by ethnicity [108]. Moreover, this may indicate that these groups have distinct environmental or genetic cancer co-etiologies [109]. In subgroup analysis based on the control source, we found that a significantly increased cancer risk was observed in HB studies, but not in PB studies. The former may have certain biases for such controls and may only represent a sample of an ill-defined reference population. Furthermore, HB controls may not be representative of the general population or it may be that numerous subjects in the PB controls were individuals susceptible to cancer [110]. In the subgroup analysis based on the genotyping method, a significantly increased cancer risk was found in the PCR-RFLP studies, but not in the PCR or TaqMan studies. A possible reason for this may be that the different genotyping methods are specialized for different aspects, and the results would be more accurate and reliable if the same genotyping method was applied in different studies [111].

Heterogeneity is a major concern for meta-analysis [119]. In our overall analysis, high heterogeneity was observed for all genetic models. However, when data were pooled in to subgroups according the control source, ethnicity, genotyping method, and cancer type, the heterogeneity decreased. Sensitivity analysis showed that the results have sufficient statistical power. There are some limitations of our meta-analysis that should be addressed. First, subgroup analysis cannot be conducted based on sex, age, lifestyle, and other factors owing to insufficient data. Second, some cancers, such as oral cancer and colorectal cancer, were not suitable for further analysis because of the small sample sizes. Thus, more studies on these cancers should be conducted in the future. Third, a single gene has only a moderate effect on cancer development; hence, the ERCC2 gene may influence susceptibility of cancer along with other genes. However, enough data for further analysis is not available. Finally, only published articles were included in the analysis; therefore, unpublished data may modify our conclusions.

In summary, our meta-analysis suggested that the ERCC2 Asp312Asn polymorphism is associated with increased cancer risk. A significantly increased cancer risk was observed in Asian populations, but not in Caucasian populations. Moreover, our results indicated that this polymorphism is associated with bladder, esophageal, and gastric cancers, but not with breast, head and neck, lung, prostate, and skin cancers, and non-Hodgkin lymphoma. In addition, stratification analyses based on the control source also indicated that this polymorphism was associated with cancer risk in the HB populations, but not in the PB populations. In subgroup analysis according to the genotyping method, a significantly increased cancer risk was found in the PCR-RFLP studies, but not in the PCR and TaqMan studies. Considering the limitations of this study, further multi-center, well-designed research should be undertaken in the future.

A systematic search of articles relating to the ERCC2 Asp312Asn polymorphism and cancer was conducted by 2 researchers, using the PubMed, EMBASE, Science Direct, Web of Science and the China National Knowledge Infrastructure (CNKI) databases. The search included studies published between January 1, 2005 and January 1, 2016. The search strategy was based on various combinations of the following terms: “xeroderma pigmentosum group d protein “[MeSH Terms] OR “xeroderma pigmentosum group d protein” [All Fields] OR “ercc2” [All Fields]) AND Asp312Asn [All Fields] AND (“neoplasms” [MeSH Terms] OR “neoplasms” [All Fields] OR “cancer” [All Fields]. In addition, the reference lists of the publications identified were searched for further relevant studies. The PRISMA Checklist was used for this meta-analysis (Supplementary Table 2).

The following inclusion criteria were set and reviewed by two independent investigators: (I) case-control study; (II) evaluation of the ERCC2 Asp312Asn polymorphism and cancer; and (III) detailed data available for calculating ORs and the corresponding 95% CIs. Studies were excluded if they: (I) had no control population; (II) were review articles or previous meta-analyses; (III) contained insufficient or duplicate data; or (IV) had no full text available.

To evaluate whether our meta-analysis had sufficient sample size to reach firm conclusions about the effect of interventions [120], TSA was used in this meta-analysis. If the cumulative Z curve in results exceeds the TSA boundary, a sufficient level of evidence for the anticipated intervention effect may have been reached and no further trials are needed. However, when the Z curve does not exceed the TSA boundaries and the required information size has not been reached, evidence to draw a conclusion is insufficient [121]. We used two-sided tests, type I error set at 5%, and power set at 80%. The required information size was calculated based on a relative risk reduction of 10%. Trials ignored in interim appear to be due to too low use of information (<1.0%) by the software. TSA was performed using the TSA software (version 0.9.5.5).

The primary objective of our meta-analysis was to calculate ORs and their 95% CIs to evaluate the association between ERCC2 Asp312Asn and cancer risks. In our included studies, no clear models had been chosen; thus, the following genetic models were used: homozygote comparison (Asn/Asn vs. Asp/Asp), heterozygote comparison (Asp/Asn vs. Asp/Asp), recessive model (Asn/Asn vs. Asp/Asp+Asp/Asn), and dominant model (Asn/Asn+Asp/Asn vs. Asp/Asp). The statistical heterogeneity assumption was evaluated using I2 statistics to quantify any inconsistency arising from inter-research variability that was derived from heterogeneity instead of random chance [107]. An I2 value from 0-25% indicates low heterogeneity, 25-50% moderate heterogeneity and ≥50% high heterogeneity [122]. Two models (fixed-effect model and random-effect model) were used for analysis [123]. When I2< 50%, we used a fixed effect model and when I2 ≥50%, we performed a random effect model [124, 125]. We used sensitivity analyses by omitting each study in turn to determine the effect of heterogeneity on the test, and evaluated the stability of the overall results [107]. Potential publication bias was assessed using the Begg's linear regression test [126]. Notably, subgroup analysis was not performed when there were fewer than 6 studies available, because the small number may have resulted in insufficient power [107]. All statistical analyses were performed using the STATA statistical software package (version 12.0; StataCorp, College Station, TX).