Parkinson’s disease (PD) is one common neurodegenerative disease characterized by loss of nigral dopaminergic neurons and the formation of Lewy bodies (LBs) [1, 2]. Substantial evidence has shown that dysfunction of the ubiquitin-proteasome system (UPS) to clear misfolded proteins can play an important role in the pathogenesis of PD [3, 4]. So, new animal models produced by using selective proteasome inhibitors can be valuable for further exploring putative neuroprotective treatment for PD. More importantly, previous research demonstrated that the proteasome inhibitor, lactacystin microinjection into the substantia nigra pars compacta (SNc) of rat could cause formation of inclusion bodies resembling LBs and degeneration of dopaminergic neurons [5, 6]. As is known, apoptosis plays an important role in the pathogenesis of PD [7]. Research has also shown an increase in the levels of apoptotic protein caspase-3 within the dopaminergic neurons of lactacystin-induced parkinsonian rat model [8, 9]. Therefore, in this report, we prepared the parkinsonian rat model by injecting one selective proteasome inhibitor, lactacystin into the SNc of rat.

Repetitive transcranial magnetic stimulation (rTMS) is one of the broadly-used, well-tolerated, noninvasive and potential method in the treatment of many neurological diseases, such as PD, focal epilepsy, recovery from stroke, and chronic pain but also psychogenic disorders [10–15]. Research reveals that rTMS has the ability to mediate the neuroplasticity and decrease an imbalance between inhibitory and excitatory inputs from the basal ganglia to premotor and motor zones in PD patients [16–18]. Increased dopamine contents have been observed after rTMS treatment in the striatum of experimental parkinsonian model, and in the anterior cingulate and the orbitofrontal cortices of PD patients [19, 20]. rTMS has also been shown to protect the dopaminergic neurons and improve the rotational behavior in 6-hydroxy-dopamine (6-OHDA)-lesioned parkinsonian rat model [21]. So, It is of great interest to investigate whether rTMS has neuroprotective effects against the proteasome inhibitor-induced dopaminergic neurodegeneration, a model of which may represent progressive condition of PD. Therefore, we designed the following experiment. We explored the efficiency of rTMS treatment, as well as its action mechanisms in treating UPS impairment-induced parkinsonian rat model.

Effect of rTMS on apomorphine-induced rotation

Three weeks after 10 ug lactacystin lesion, the number of turning in model group, rTMS group and sham stimulation group averaged 275.5 ± 5.6, 272.6 ± 8.2, and 269.3 ± 6.5 turns per 30 minutes in the pre-TMS phase, respectively. rTMS treatment attenuated lactacystin-induced rotational behavior after 2 weeks of treatment, and the effects were more obvious after 4 weeks of treatment (Figure 1). 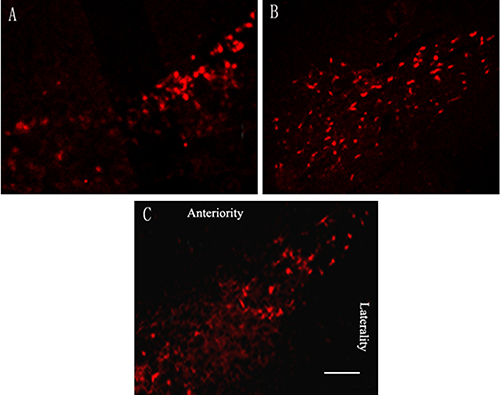 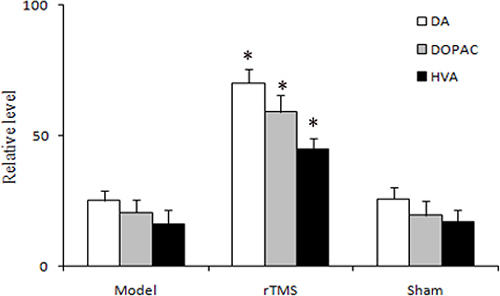 Figure 3: Effects of repetitive transcranial magnetic stimulation (rTMS) treatment on the relative level of dopamine (DA) and its metabolites, 3,4-dihydroxyphenylacetic acid (DOPAC) and homovanilic acid (HVA) in the striatum of the rats induced by lactacystin (n = 6). The value of lesioned striatum is expressed as the mean percent of unlesioned striatum. *P < 0.05 versus model group and sham stimulation group.

Effects of rTMS on the expression of cleaved caspase-3 protein

Caspase-3 is synthesized as an inactive proenzyme procaspase-3, which is converted into active enzyme, cleaved caspase-3. The level of procaspase-3 and cleaved caspase-3 in substantia nigra was defined as a percentage of the unlesioned side. As demonstrated in Figure 4, the expression of cleaved caspase-3 was upregulated obviously in the parkinsonian model group, and these lactacystin-induced upregulations were clearly reduced in the rTMS treatment group. 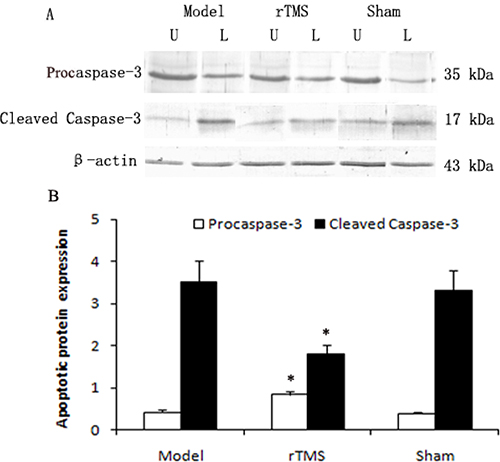 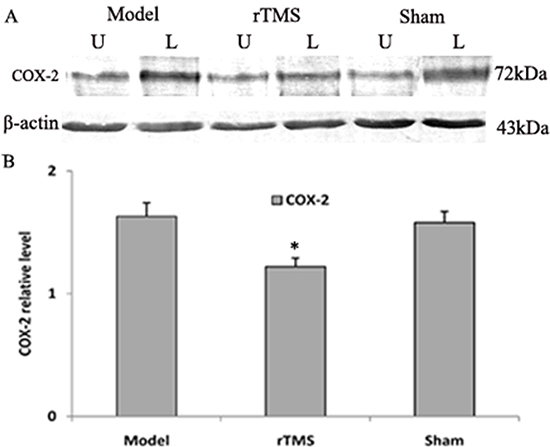 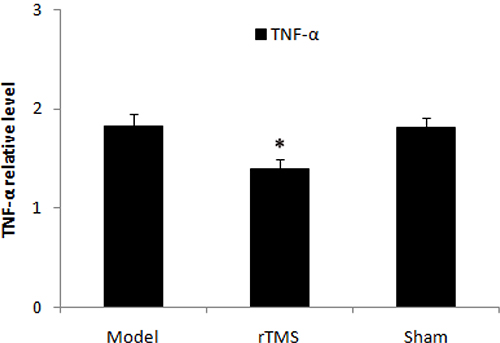 Figure 6: Effects of repetitive transcranial magnetic stimulation (rTMS) treatment on the expression of TNF-α in the substantia nigra of the rats induced by lactacystin. The value of lesioned striatum is expressed as the mean ratio of unlesioned striatum (n = 6). *P < 0.05 versus model group and sham stimulation group.

PD is characterized with the appearance of motor impairments, which finally respond less to dopaminergic therapy and propose a medical challenge [22, 23].The non-invasive rTMS has shown promising effects in improving motor disability, and might provide a therapeutic alternative with relatively few side effect [10–13]. In clinical applications, studies performed until now using rTMS displayed heterogeneous results, which can be due to large heterogeneity of cortical targets, stimulation parameters, the variability of patients’ profile, and small sample size, [11, 17, 18, 24]. Future large-sample, well-designed clinical trials are still highly desirable in order to verify the potential therapeutic effect of rTMS. Excitingly, in preclinical study, low-frequency and high-frequency rTMS have been shown neuroprotective effects against in 6-OHDA-lesioned parkinsonian rat model [21, 25]. The possible inadvertent seizures by high-frequency rTMS at high intensities are one of most significant concerns [26]. Low-frequency rTMS did not lead to epilepsy wave on electroencephalograms (EEGs) of rats [27]. The effect of rTMS was also related to stimulation intensity. The present stimulation variables were in accordance with published safety recommendations. The stimulation intensity was set to be above active motor threshold, which could elicit a sustainable effect on cortical excitability without seizures [21]. Therefore, to prevent this side effect, we selected low-frequency (0.5 Hz) rTMS on parkinsonian rats according to previous research [21]. In the period of the experiment, we didn’t find any seizure and unpleasantness-like stress behavior in parkinsonian rats. In addition, choosing low-frequency rTMS is also taking into account the need for long-term treatment of PD patients. Then, by use of this well-tolerated rTMS method in the newly lactacystin-induced parkinsonian animal models, we further established the therapeutic effect and action mechanism of rTMS.

Neuroinflammation also plays an important role in the pathogenesis of PD [30]. Recent studies have reported that microglial activation and dopaminergic neuron death in substantia nigra were observed in lactacystin-induced parkinsonian model [31, 32]. Lactacystin-induced UPS inhibition can directly trigger neuroinflammation, which leads to neuron death [33]. Previous research has also demonstrated that the expression of various inflammatory molecules increased within the neurons of PD patients [30, 34]. The inhibition of TNF-α and COX-2 has generated neuroprotective effect [35–37]. In the present study, we found that low-frequency rTMS inhibited the expression of TNF-α and COX-2 in lactacystin-induced parkinsonian rat model, and thus prevented dopaminergic neuron apoptosis in parkinsonian rat model.

Sixty adult Sprague–Dawley rats (female, 200–250 g) were selected for the study. The rats were housed under controlled temperature (21°C) and light conditions (12-h light/dark cycle) with free access to water and standard diet. The protocol relating to animals was approved by the Local Ethics Committee and was carried out in line with the guidelines of the National Institutes of Health for the care and use of laboratory animals (NIH publication No. 80–23) and the Animals Research: Reporting In vivo Experiments (ARRIVE) guidelines. The principles of the 3Rs, Replacement, Reduction and Refinement, are incorporated into guidelines and practice of animal experiments in order to safeguard animal welfare.

Rats received microinjections of lactacystin. The coordinate of the right SNc was in line with a rat brain atlas (bregma:5.2 mm; lateral:3.2 mm; dura:7.2 mm) [38]. Three weeks after lactacystin microinjections, the rats that displayed apomorphine-induced rotation of over seven turns per minute away from the lesioned side were chosen for the next study [6]. In our preliminary experiment, we tried different dose of lactacystin (2 ug, 10 ug and 15 ug in 2.5 ul physiological saline). The data showed that 10 ug and 15 ug lactacystin had obvious impact on rotational behavior. However, there is no difference of the number of turns between 10 ug lactacystin and 15 ug lactacystin. Thus, a dose (10 ug) of lactacystin was used in the present study. Only saline injection had no impact on rotational behavior of rat.

After rTMS treatment, apomorphine-induced rotation (0.5 mg/kg apomorphine, intraperitoneally [i.p.]) was blindly tested in 30 min for each rat to assess the nigrostriatal damage. The rats were placed in a stainless steel bowl. The numbers of rotations in a 30 min test were scored visually for each rat by one blinded rater. The turns of rats were carried out in 2 and 4 weeks after rTMS treatment (Figure 7).

Rats (six rats per group) were sacrificed and striatal dopamine content was detected according to previous report [39]. Results were normalized to wet weight of the sample.

In order to assess the caspase-3 and COX-2 protein expression in the substantia nigra, western blots of the protein extracts (six rats per group) was performed using an primary anti-procaspase-3, anti-cleaved caspase-3 and anti-COX-2 antibody. The method of western blots was performed as follows. 30 mg protein samples taken, 10% sodium dodecyl sulfate polyacrylamide gel (SDS-PAGE) electrophoresis, then transferred to Polyvinylidene-Fluoride (PVDF) membrane, blocked for 1 h with 5% skim milk, and finally closed overnight with primary antibody [(rabbit anti-rat procaspase-3 or anti-cleaved caspase-3 antibody (1:500, Sigma, USA) or anti-COX-2 antibody (1:500, Santa Cruz, CA)(4°C, shaker)], the PVDF were washed 3 times in TBST (TBS with 0.05% v/v Tween-20) at room temperature and then incubated with horseradish peroxidase-conjugated secondary antibody diluted in TBST (1:2,000) for 1 h at room temperature followed by washing, signal detection was performed with an enhanced chemiluminiscence kit, and β-actin as an internal reference, finally analysis of the integral value of the optical density using image analysis software.

The supernatants of lysed nigral tissues (six rats per group) were measured for TNF-α concentrations by ELISA protocol in line with the guideline of the manufacturer (Boster, China). Values were transformed to pg/ml according to the standard curve using samples with known TNF-α concentrations. The range of TNF-α values measured by this method was 5–2000 pg/ml.

Data were presented as mean ± standard error of the mean (SEM). Statistical analysis were processed by analysis of variance (ANOVA) with Dunnett’s t-test. A P value of < 0.05 was regarded statistically significant.

In summary, our data demonstrated that in parkinsonian rat model induced by lactacystin, one selective proteasome inhibitor, low-frequency rTMS treatment can be a feasible neuroprotective method to rescue the degenerative dopaminergic neurons. Both anti-apoptotic and anti-inflammatory molecular mechanism are involved in the neuroprotection of low-frequency rTMS.

There are no conflicting interests in the present research.