A preoperative scoring system to predict the risk of No.10 lymph node metastasis for advanced upper gastric cancer: a large case report based on a single-center study

Method: Between January 2011 and December 2014, we prospectively collected and retrospectively analyzed the data of 398 patients with upper-third gastric cancer (GC) who underwent laparoscopic spleen-preserving hilar lymph-node dissection (SHLND). We use the logistics regression analysis risk factors of No. 10 LN metastasis to establish and verify a scoring model.

Result: Among the 398 patients examined, 38 patients had No. 10 LN metastasis, yielding a 9.6% transfer rate. The preoperative risk factor analysis for No. 10 LN metastasis in the modeling group showed that tumor size, preoperative T staging, and preoperative N staging are independent risk factors. To establish a scoring system, we divided the modeling group of patients into three levels: low risk, intermediate risk, and high risk. The No. 10 LN metastasis rates of the low risk, intermediate risk and high risk groups were 2.84%, 13.9% and 34.9% respectively, with statistically significant (P<0.001). The value for the area under the ROC curve of the scoring system was 0.820, and there were no statistically significant differences between the observed and predicted incidence rates for No. 10 LN metastasis in the validation set (P>0.05).

Conclusion: The scoring system comprising the tumor size, preoperative T stage and N stage is a simple and effective method to predict the risk of No. 10 LN metastasis and to preoperatively select cases suitable for laparoscopic spleen-preserving SHLND.

For advanced proximal gastric cancer (GC), the No. 10 lymph node (LN) is a crucial link in lymphatic drainage. Previous reports have found that the No. 10 LN metastasis rate is approximately 9.5% to 27.9% [1–3]. According to 14th edition of the Japanese gastric cancer treatment guidelines, D2 lymphadenectomy is the standard procedure for advanced GC, and the No. 10 LN should be dissected for the treatment of advanced upper GC. In recent years, as the concept of preserving viscera function and the use of minimally invasive technology has been accepted by an increasing number of clinicians, laparoscopic spleen-preserving splenic hilar LN dissection (SHLND) has become a valuable treatment option, and its use has gradually increased. In 2008, the South Korean scholar Hyung et al. [4] reported the first use of laparoscopic treatment to preserve the spleen during SHLND of upper GC, achieving a good curative effect and indicating that the operation is safe and feasible. Since then, the use of laparoscopic surgery to preserve the spleen during SHLND has increased [5]. However, this technology is difficult to implement in clinical practice because the spleen is deep, the operating space is narrow, and the splenic vessels are rich in this area and their branches are particularly complex. Thus, improvements in the preoperative prediction of No. 10 LN metastasis, which could provide medical evidence for SHLND indications, are urgently needed. However, few studies have focused on this topic. Therefore, we performed a retrospective study of patients subjected to laparoscopic spleen-preserving SHLND surgery to explore the preoperative factors associated with No. 10 LN metastasis and establish a new scoring system to preoperatively predict the risk of No. 10 LN metastasis.

The 299 patients in the model development group included 228 males (76.5%) and 70 females (23.5%) with a mean age of 60.44 ± 10.29 years. The average body mass index (BMI) of the patients was 22.15 ± 2.71 kg/m2. The preoperative clinicopathological characteristics of the patients between the modeling and validation groups were compared, and the differences showed no statistical significance (Table 1).

Table 1: Comparison of preoperative information between the modeling and validation groups

Table 2: Comparison of the intraoperative and postoperative information between No. 10+ and No. 10- patients

No. 10 lymph node metastasis and prognosis in the model development group 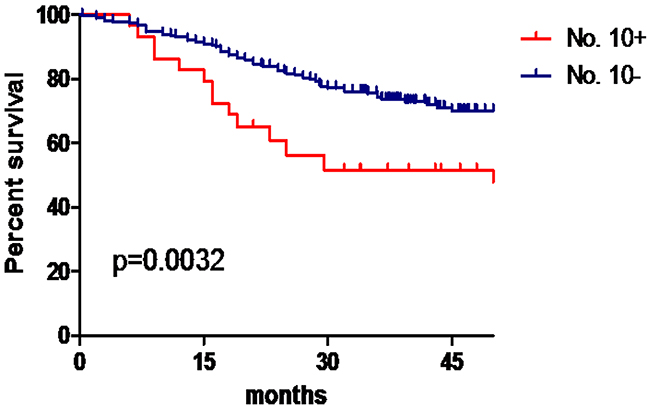 Figure 1: No. 10 LN metastasis and prognosis in the model development group.

Construction of the forecast model of No. 10 LN metastasis and degree of hazard grouping 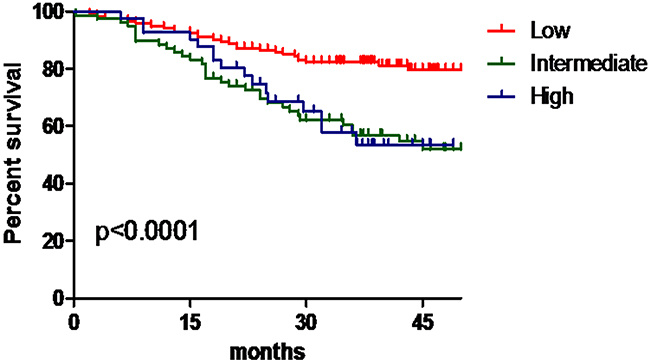 Figure 2: The OS for patients in the low-, intermediate- and high-risk groups.

Table 5: Construction of the forecast model of No. 10 LN metastasis and the grouping degree of hazard

The area under the ROC curve was 0.820 for the simplified TNS score for No. 10 LN metastasis. Compared with tumor size, preoperative N staging or the preoperative T staging, the TNS score more accurately predicts No.10 LN metastasis (Figure 3). The incidence rates observed in the validation set were compared to the predicted incidence rates to evaluate the model performance. The ratio of the expected to observed risk of No. 10 LN metastasis was 1.49, (χ2 = 0.84, P = 0.359), indicating good calibration. The ratios of the expected to observed risks for the low-, intermediate-, and high-risk categories in the validation set were 1.56, 1.08, and 2.09, respectively. There were no statistically significant differences among the groups (Table 6). 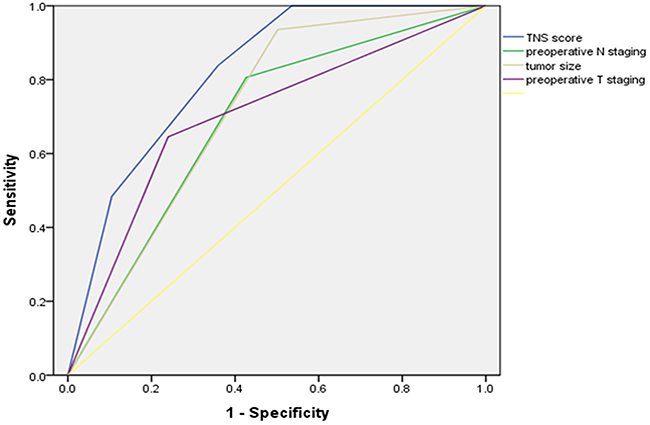 Figure 3: Receiver operating characteristic curves for prediction of TNS score for No. 10 LN metastasis compared with preoperative N staging, tumor size or the preoperative T staging in the development sets.

Table 6: Validation of the test model

Figure 4: Proposed algorithm for the medical evidence for SHLND indications.

This study presents a retrospective analysis of a prospectively collected database of upper- or middle-third GC patients treated with laparoscopic spleen-preserving SHLND in the Department of Gastric Surgery of Fujian Medical University Union Hospital, Fuzhou, China, between January 2011 and December 2014. The following inclusion criteria were used: (1) histologically confirmed primary adenocarcinoma in the upper- or middle-third stomach; (2) no evidence of tumor invasion in adjacent organs (pancreas, spleen, liver, or transverse colon), enlargement or integration of the para-aortic or splenic hilar LNs, or distant metastasis demonstrated by preoperative abdominal computed tomography (CT), abdominal ultrasound or endoscopic ultrasound; and (3) a total gastrectomy plus D2 lymphadenectomy with curative R0 resection based on the postoperative pathological diagnosis. The exclusion criteria were patients with T4b tumors; incomplete clinicopathological data; intraoperative evidence of peritoneal dissemination or distant metastasis; or gastric stump carcinoma. A total of 398 patients, including 302 males and 96 females with a mean age of 60.76 ± 10.58 years, were included in the present study. The preoperative size, location, T stage (with or without the presence of serosal invasion) and N stage (with or without LN metastasis) of the neoplasm were assessed in all patients via upper digestive endoscopy with biopsy, chest X-ray, total abdominal ultrasound, and abdominopelvic CT scan. Preoperative comorbidities were described according to the classification system of the American Society of Anesthesiologists [6]. CT scans and multi-slice spiral CT angiography were performed to preoperatively assess the splenic vascular anatomy. BLV(mL) of splenic LNs was estimated according to the number of the gauze blocks and the trip attraction of aspirator, A piece of “two by two” is equivalent to 4 ml.The patient demographics, underlying diseases, clinicopathology, and preoperative and postoperative monitoring data were recorded in a clinical data system for GC surgery. The type of surgical resection and extent of LN dissection were selected according to the Japanese gastric cancer treatment guidelines [7]. The resected specimens were histopathologically examined and staged according to the 7th edition of the UICC TNM classification [8]. According to the reported references [9–11], data were randomly divided into two subsets using SPSS version 18.0 (SPSS, Chicago, IL, USA) to create a 75/25 split, with one subset used for model development and the other used for validation testing.

The research proposal was reviewed by the Research Ethical Committee at the university, and all procedures were performed after obtaining written informed consent from the patients following an explanation of the surgical and oncological risks.

Trained investigators performed the postoperative follow-ups through mailings, telephone calls, home visits or outpatient services. The majority of patients routinely underwent physical examinations, laboratory testing (including CA19-9, CA72-4, and CEA levels), chest radiography, abdominal US or CT, and an annual endoscopic examination. Overall survival (OS) was calculated from the day of surgery until death or until the final follow-up date of June 2016, whichever occurred first.

The continuous data are reported as the means ± SD, and the differences between the groups were analyzed using t-tests. The categorical data are presented as the proportion and percentage, analyzed using the chi-square test or Fisher’s exact test. The variables in the models reaching P < 0.05 in the univariate analysis were subsequently included in a multivariate binary logistic regression model. The variables that remained significant in the multivariate analysis were used to construct a scoring system to classify patients into groups based on their risk for laparoscopic hemostasis. The results of the multivariate analyses are expressed as odds ratios (ORs) with corresponding 95% confidence intervals (95%CIs). A goodness-of-fit test was conducted to assess how well the model could discriminate between patients with and without No. 10 LN metastasis. Receiver operating characteristic (ROC) and area under the curve (AUC) analyses were used to determine the adequacy of the prediction models. Values of 0.7 and higher were considered clinically significant [12]. The model was internally validated using a validation set. The model calibration, or the degree to which the observed outcomes were similar to the outcomes predicted by the model across patients, was examined by comparing the observed averages with the predicted averages within each subgroup, arranged in increasing order of patient risk. Values of P < 0.05 were considered statistically significant. The statistical analyses were performed using SPSS version 18.0 (SPSS, Chicago, IL, USA).

The authors are thankful to Fujian Medical University Union Hospital for her management of our gastric cancer patient database.

There are no conflicts of interest or financial ties to disclose from any authors.

The study was sponsored by the National Key Clinical Specialty Discipline Construction program of China (No. [2012]649) and the Key Projects of Science and Technology Plan of Fujian Province (No. 2014Y0025).