We performed transcriptome sequencing for hepatocellular carcinoma (HCC) and adjacent non-tumorous tissues to investigate the molecular basis of HCC. Nine HCC patients were recruited and differentially expressed genes (DEGs) were identified. Candidate fusion transcripts were also identified. A total of 1943 DEGs were detected, including 690 up-regulated and 1253 down-regulated genes, and enriched in ten pathways including cell cycle, DNA replication, p53, complement and coagulation cascades, etc. Seven candidate fusion genes were detected and CRYL1-IFT88 was successfully validated in the discovery sequencing sample and another 5 tumor samples with the recurrent rate of about 9.52% (6/63). The full length of CRYL1-IFT88 was obtained by 3′ and 5′ RACE. The function of the fusion transcript is closed to CRYL1 because it contained most of domain of CRYL1. According to the bioinformatics analysis, IFT88, reported as a tumor suppressor, might be seriously depressed in the tumor cell with this fusion because the transcript structure of IFT88 was totally changed. The function depression of IFT88 caused by gene fusion CRYL1-IFT88 might be associated with tumorigenesis or development of HCC.

Hepatocellular carcinoma (HCC) is one of the most common malignancies worldwide [1–3]. About 745,000 deaths per year can be attributed to HCC [4]. Hepatic resection is currently the most optimal choice for HCC treatment. However, surgical resection is not applicable in most patients, and its long-term prognosis remains unsatisfactory [5]. To date, it is known that both cellular changes and etiological agents (i.e., virus infection and alcohol) are responsible for the cause of HCC [6, 7]. However, like any other complex diseases [8], the molecular pathogenesis of HCC remains poorly understood [9]. The lack of good diagnostic markers and therapeutic targets has rendered HCC a major challenge.

In this study, we performed transcriptome sequencing for HCC and adjacent non-tumorous tissues to investigate the molecular basis of HCC. Nine patients diagnosed as primary HCC were recruited and differentially expressed genes (DEGs) were identified. Candidate fusion transcripts were also identified by using defuse [15]. Further RT-PCR and Sanger sequencing experiments were performed to validate potential recurrent fusion transcripts in other 54 pairs of tumor and adjacent non-tumor samples. Our investigation may shed light on the molecular event responsible for the progression of HCC and offer new possibilities for clinical management of HCC patients.

Pair-end second-generation transcriptome sequencing was performed in nine HCC patients. Sample characteristics are list in Table 1. An average of 35,772,695 pair-end 125 bp clean reads was generated (Table 2). The average mapping rate was 93.17%, resulting an average coverage of depth of 32x (Table 2).

Note: The nine samples used for sequencing are shown in bold. The six samples with validated fusion CRYL1-IFT88 are shown in italic.

We next detected DEGs between tumor and non-tumor samples. A total of 1943 DEGs were detected, including 690 up-regulated and 1253 down-regulated genes.

DEGs were subjected to KEGG pathway analyses. As shown in Table 3, with the cut off of FDR < 0.05, DEGs were enriched in ten pathways, including cell cycle (hsa04110), DNA replication (hsa03030), p53 (hsa04115) and complement and coagulation cascades pathway (hsa04610), as well as retinol, xenobiotics by cytochrome P450, drug, arachidonic acid, tyrosine and fatty acid metabolism pathway (hsa00830, 00980, 00982, 00590, 00350, 00071). The GO category enrichment analyses resulted extensive items overrepresented with DEGs. As shown in Table 3, GO items (FDR < 10–3) enriched with DEGs were associated with cell cycle and other processes, such as immune response, DNA replication, complement activation, oxidation, metabolism, and so on.

To detect fusion transcripts that might be the potential cause for tumorigenesis, the software defuse was used and after the filtering process as described in the methods section. Seven candidate fusion genes were detected (Table 4). Using RT-PCR and Sanger sequencing, the fusion gene CRYL1-IFT88 was successfully validated in the discovery sequencing sample (P10 tumor sample) and it was also validated in another 5 tumor samples (Figures 1–2). Therefore, this fusion gene is considered as a recurrent fusion transcript related to HCC with the recurrent rate of about 9.52% (6/63). To investigate how the gene fusion CRYL1-IFT88 affected their expression and proteins, we observed the reads coverage in genomes by IGV (Integrative Genomics Viewer) and domains by NCBI CD-search (Conserved Domains search). We found that quite a lot RNA-Seq reads covered in the intron between exon 15 and exon 16 of IFT88 in tumor sample of P10, but this was not observed in the matched normal sample (Figure 3 top), which indicated that the transcription structure of IFT88 was very likely changed in the tumor cells with this fusion. This break was just occurred in the middle of IFT88 protein sequence ((Figure 3 bottom), which might totally destroy the function of IFT88. However, the change of reads coverage was not observed in the genes CRYL1, it might be the high expression of wild-type CRYL1 masked the change of expression structure. 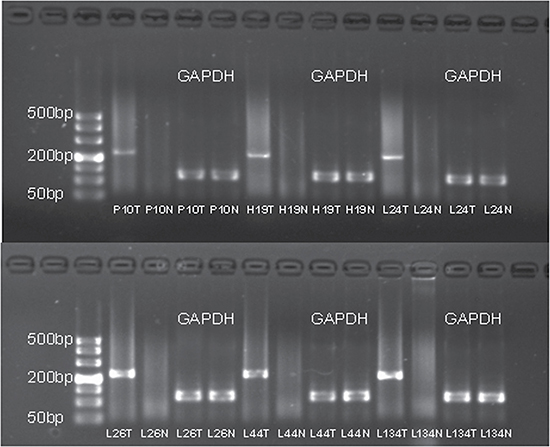 Figure 2: The agarose gel electrophoresis of the six samples with successfully validated fusion transcript CRYL1-IFT88. The RT-PCR product for the fusion gene was 230 bp. The IDs of samples corresponded to Table 1. T and N represented tumor and adjacent non-tumor tissue, respectively. 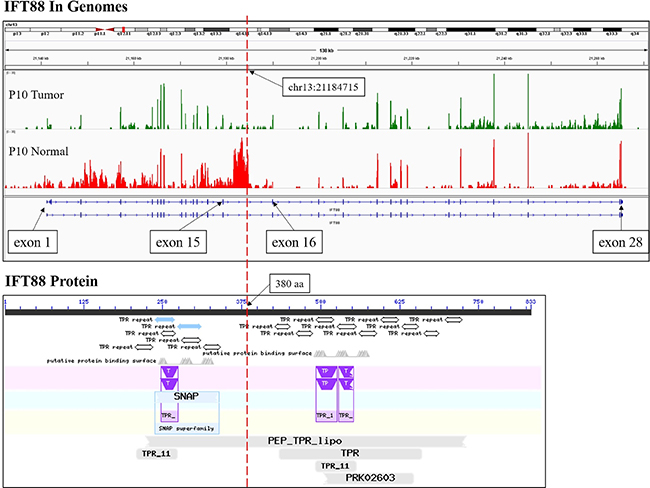 To discover the function of the fusion transcript, we performed both 3′ and 5′ RACE (rapid-amplification of cDNA ends) experiments and obtained the full-length CRYL1-IFT88 fusion sequence (779 bp). The longest ORF was 279 bp (predicted by NCBI ORF-finder) and corresponding to a 92 aa protein sequence (see Supplementary File.docx). And the fusion protein contained most of the domain of CRYL1, including 3-hydroxybutyryl-CoA dehydrogenase domain, NAD binding domain, and so on, which indicated that the functional of the CRYL1-IFT88 were similar with CRYL1 (see Supplementary File.docx).

We have applied the transcriptome sequencing approach to illustrate the gene expression characteristics of HCC. Pathway analyses showed that ten pathways, including cell cycle, DNA replication, p53 and complement and coagulation cascades as well as six metabolism processes, were overrepresented with DEGs. Deregulation of the cell cycle [16], DNA replication [17] and p53 pathways [18] are expected since uncontrolled cell division and aberrant tumor suppressor are the major character of cancer cells. As for the complement and coagulation cascades pathway, consistent with our results, both gene expression [19] and proteomics [20] analyses have shown that this pathway is related to the pathogenesis of HCC.

Gene fusion is an important event involved in the development of various types of malignancies, which is the consequence of the genomic rearrangements with a deletion, insertion, translocation or inversion of distal intra- or inter-chromosomal sequences [21]. The oncogenic activation may be triggered by the gene activation or repression due to gene fusion. The Philadelphia chromosome found in chronic myelogenous leukemia (CML) consisting of the BCR-ABL fusion gene is a classical example of gene fusion, an activated tyrosine kinase that drives CML [22]. Recent technology advances especially transcriptome sequencing and bioinformatics strategy for processing cancer profiling data, make the discovery of more fusion genes in cancers, including a recurrent chimeric transcript DNAJB1-PRKACA in FL-HCC [9] and SLC45A3-ELK4 in prostate cancers [23], etc. These known fusion genes provide key insights into tumor biology and have significant clinical impact by serving as potential diagnostic markers or therapeutic targets. In our study, we detected seven chimeric transcripts in total by transcriptome sequencing. Fusion genes were subjected to validation and successfully confirmed that CRYL1-IFT88 is a recurrent fusion transcript related with HCC. To our knowledge, this fusion gene was first reported and validated in HCC. Protein encoded by CRYL1 catalyzes the dehydrogenation of L-gulonate into dehydro-L-gulonate in the uronate cycle, which is an alternative glucose metabolic pathway. Reduced expression of CRYL1 in HCC has been observed in many studies [24–26]. Moreover, it was reported that reduced CRYL1 expression in HCC confers cell growth advantages and correlates with adverse patient prognosis [26]. Protein encoded by IFT88 is a member of the tetratrico peptide repeat (TPR) family, and is involved in liver oval cell proliferation, differentiation, and ploidy control [27]. Tumor suppression activity of this gene was demonstrated and this gene was reported as a liver neoplasia tumor suppressor gene in a previous study [28]. According to our bioinformatics analysis, the protein function of IFT88 might be suppressed due to the gene fusion. Considering the potential involvement of these two genes in HCC, the fusion transcript we identified here might be responsible for the tumorigenesis and serve as potential targets for further therapeutic strategy by the overexpression of IFT88 to overcome the function inhibition due to gene fusion CRYL1-IFT88.

In conclusion, we used transcriptome sequencing approach to illustrate the gene expression characteristics of HCC. Cell cycle, DNA replication, p53 and complement and coagulation cascades pathways as well as some metabolism processes were overrepresented with DEGs. Of note, we detected and successfully validated CRYL1-IFT88 as a recurrent fusion transcript in HCC with the recurrent rate of about 9.52% (6/63).

Our study design was approved by the institutional review board of the Fujian provincial hospital. Written informed consent was obtained from all subjects.

Sixty-three subjects aged from 18 to 76 were diagnosed as primary HCC in the Fujian provincial hospital during the period from 03/01/2014 to 12/31/2015. Hepatitis B virus (HBV) related tumors were defined according to the presence of HB surface antigen (HBsAg) in serum, and hepatitis C virus (HCV) related tumors were according to the presence of antibody to HCV (HCVAb) in serum. NBNC tumor was defined according to the absence of both HBsAg and HCVAb in serum. Primary tumor and adjacent non-tumorous samples were obtained from all patients who underwent surgical tumor resection. All samples were frozen immediately at –80°C until RNA extraction. Total RNA was isolated by using RecoverAll™ Total Nucleic Acid Isolation Kit (Life Technologies, Carlsbad, CA, USA). Integrity of RNA was assessed by Agilent 2100 bioanalyzer (Agilent, Santa Clara, CA, USA). RNA from nine samples was subjected to sequencing and other samples were used in the validation experiments.

Raw sequencing reads were firstly filtered for adapters and ribosomal RNA. Reads containing five or more low quality (quality score < 20) bases were also removed. The remained high-quality reads were then aligned to human genome (hg19) by using Tophat [29]. The mapped reads were then subjected to alignment against the the human transcriptome (Ensembl, GRCh37.73). Gene expression level measured by FPKM (fragments per kilobase per million) was calculated by Cufflinks [30]. All processed expression data have been submitted to GEO database (Access number: GSE 97214).

For each group, DEGs between the tumor and matched non-tumor tissues were selected with pair-wise t test and the significant threshold was set as p-value of less than 0.05 and |log2(fold change, FC)| > = 1. DAVID [31] was used to do the Gene Ontology (GO) and KEGG pathway annotation and enrichment analyses. The significant threshold for enrichment was set as false discovery rate (FDR) < 0.05.

Fusion transcripts were identified by defuse [15]. The default filtering processes of defuse were carried out as previously described [15]. The results of deFuse were further filtered to reduce false positives with the following criteria: 1) predictions supported by less than eight reads were removed; 2) predictions between adjacent genes were filtered unless implied in genomic inversion or eversion; 3) predictions related to ribosomal proteins or small nuclear ribosomal proteins were removed.

The authors have no financial conflicts of interest.

This study is supported by the Middle-young age backbone talent cultivation program of Fujian health system (No. 2013-ZQN-JC-2); Key projects of science and technology plan of Fujian province (No. 2014Y0009).

6. He B, Zhang H, Shi T. A comprehensive analysis of the dynamic biological networks in HCV induced hepatocarcinogenesis. PLoS One. 2011; 6:e18516.