Statin use and survival outcomes in endocrine-related gynecologic cancers: A systematic review and meta-analysis

Statins are a group of commonly prescribed medications used primarily for the management of hypercholesterolemia and prevention of coronary heart disease [5–6]. They block 3-hydroxy-3-methyl-glutaryl-coenzyme A (HMG-CoA) reductase, the rate-limiting enzyme for conversion of HMG-CoA to the cholesterol precursor mevalonic acid [7]. The inhibition of the mevalonic acid pathway leads to critical changes in cellular functions. Interestingly, preclinical studies have found that statins also have antineoplastic potential through the induction of tumor cell apoptosis and inhibition of tumor cell proliferation, invasion, and migration [8–10]. These effects have also been shown in ovarian and endometrial cancer-derived cell lines [11–12]. Indeed, a body of epidemiologic studies has demonstrated that statins are associated with improved survival outcomes in several malignancies, including breast, gastric, colorectal, prostate, and kidney cancer [13–17].

In our initial search, we identified 1,379 records from the database search and 4 published abstracts from conference proceedings. After screening the titles and abstracts, 21 potentially relevant records were retrieved for further review. Of these, we excluded 11 studies for the following reasons: 4 did not report the survival outcomes in gynecologic cancers [18–21], 4 used overlapping data [22–25], and 3 did not have usable data [26–28]. We identified no additional ongoing trials from trial registers. One study was retrieved from reference lists [29]. Finally, 11 studies that met our eligibility criteria were included in the meta-analysis. The flow diagram summarizing the process of study selection is shown in Figure 1. 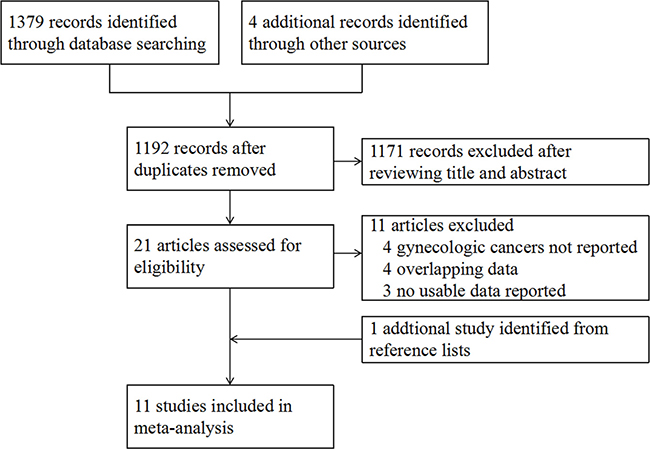 Seven studies involving 5,449 patients with endocrine-related gynecologic cancers investigated the association between statin use and overall survival (OS) [30, 32–34, 37–39]. The pooled data showed that statin use was associated with improved OS (HR, 0.71; 95% CI, 0.63 to 0.80). The Chi-square test resulted in a p value of 0.151 and the corresponding I2 was 33.3%, both indicating no significant heterogeneity (Figure 2). 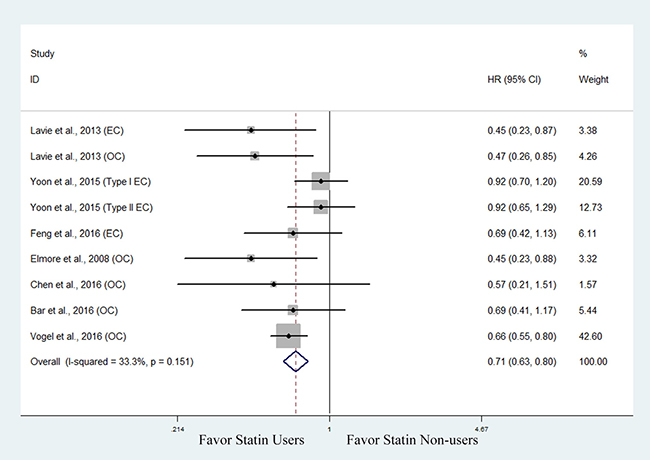 Figure 2: Forest plot of the effect of statin use on overall survival in endocrine-related gynecologic cancer patients. 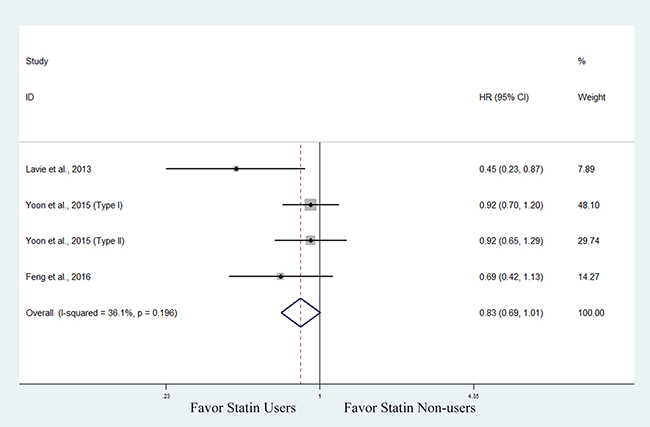 Figure 3: Forest plot of the effect of statin use on overall survival in endometrial cancer patients. 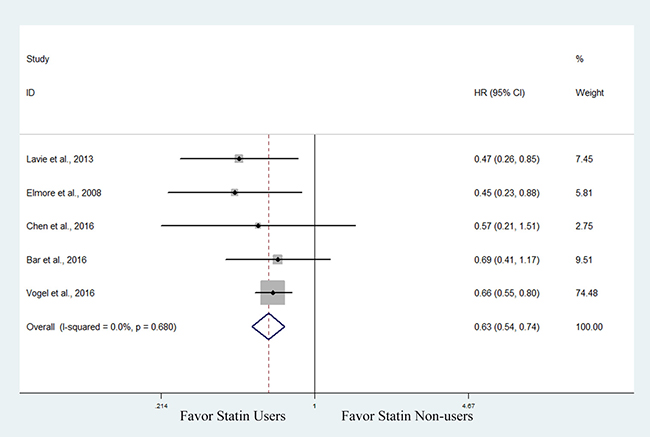 Figure 4: Forest plot of the effect of statin use on overall survival in ovarian cancer patients.

Three studies investigated the association between statin use and disease-specific survival (DSS) in endocrine-related gynecologic cancers [29, 31, 36]. The pooled data showed that statin use was significantly associated with improved DSS (HR, 0.72; 95% CI, 0.58 to 0.90). The Chi-square test resulted in a p value of 0.202 and the corresponding I2 was 35.1%, indicating no significant heterogeneity (Figure 5). We did not perform a subanalysis based on cancer type as only two studies reported on DSS in endometrial cancer [29, 31] and ovarian cancer [29, 36], respectively. 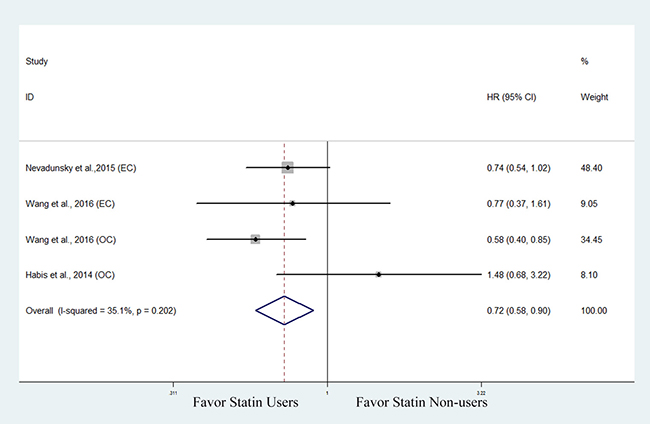 Figure 5: Forest plot of the effect of statin use on disease-specific survival in endocrine-related gynecologic cancer patients.

Three studies involving 421 patients with endocrine-related gynecologic cancers explored the association between statin use and progression-free survival (PFS) [33, 34, 36]. The pooled data showed that statin use was significantly associated with improved PFS (HR, 0.68; 95% CI, 0.49 to 0.93). The Chi-square test resulted in a p value of 0.222 and the corresponding I2 was 33.6%, indicating no significant heterogeneity (Figure 6). We did not perform a subanalysis based on cancer type as PFS in endometrial cancer [33] and ovarian cancer [34, 36] was only reported in 1 and 2 studies, respectively. 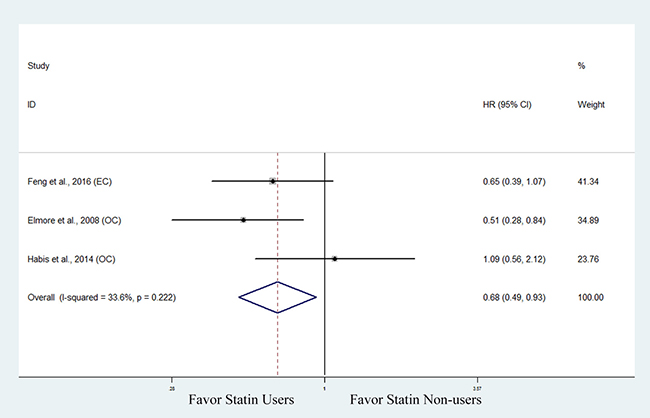 Figure 6: Forest plot of the effect of statin use on progression free survival in endocrine-related gynecologic cancer patients.

Data not included in the meta-analysis

There is a long-standing debate regarding the association between statin use and survival outcomes in gynecologic cancers. Meta-analysis provides an objective evaluation of the evidence, which may lead to the resolution of uncertainty and controversy by permitting a synthesis of data [40]. In accordance with the promising findings derived from in vitro and animal studies [11, 12, 41], the present meta-analysis provide supportive evidence for an association between statin use and improved survival outcomes in endocrine-related gynecologic cancers. In this meta-analysis of 11 non-randomized studies, we found that patients with endocrine-related gynecologic cancers who used statins showed significantly improved OS, DSS, and PFS. Our results are consistent with recent meta-analyses regarding the protective effect of statin use on other site-specific cancers. Similarly, these reports concluded that statin use was associated with improved survival outcomes in colorectal, breast, prostate and kidney cancer [42–45].

Proposed mechanisms to explain the protective effect of statins on endocrine-related gynecologic cancers include cholesterol lowering and systematic anti-inflammatory effects through the mevalonic acid pathway [46]. The lowering of cholesterol may reduce metabolites that are crucially involved in cell proliferation, angiogenesis, and migration. Murine models of ovarian cancer were found to undergo decreased cell proliferation and increased apoptosis when treated with statins [41]. Statins also affect the proliferation of tumor cells in murine models of breast, colon, pancreatic, liver, and prostate cancers [47–50]. Additionally, statins can also stimulate inflammatory responses and anticancer immune surveillance via the phosphorylation of Akt and down-regulation of the mammalian target of rapamycin (mTOR) [51].

The present study has some important strengths. First, a comprehensive, systematic, and reproducible search for relevant published and unpublished papers was performed. No exclusion criteria in terms of language, methodological characteristics or place of publication were applied. Hence, the likelihood of important selection or publication bias in the review process was small. Second, no significant heterogeneity was present in any of the analyses, including OS, DSS, and PFS, which reinforced our confidence in the reliability of the pooled results. Third, most studies included in our meta-analysis had high methodological quality scores, which further enhanced the reliability of our results. To the best of our knowledge, the present study is the first article to investigate the relationship between statin use and survival outcomes in endocrine-related gynecologic cancers.

Still, this meta-analysis has some limitations. First, as there were no relevant RCTs in the literature to date, all of the included studies were non-randomized studies. Second, most of the included studies were retrospective in design; thus, it was impossible to eliminate the possibility of recall bias, and the true effect of the statins might be overestimated due to the lack of experimental random allocation to the intervention. Third, 2 abstracts without available full texts were included in our study, which made it difficult to properly assess their methodological qualities. Fourth, some studies did not provide information regarding tumor stage, tumor grade, primary treatments, or the definition of DSS and PFS, which may have introduced a bias. In addition, the method of adjustment for potential confounding factors was not consistent in all of the studies. Even though the multivariate Cox proportional hazards model was employed in most studies, only univariate analysis was applied in the studies without the necessary data. Therefore, our results should be interpreted cautiously, and further prospective randomized trials are required for a more definitive understanding. Finally, the limited number of included studies made it impractical to evaluate the effects of statins according to type, dose, frequency, and duration of use.

In summary, the findings of this systematic review and meta-analysis demonstrate that statin use is potentially beneficial in terms of OS, DSS, and PFS in endocrine-related gynecologic cancers. Since we cannot exclude the potential methodological limitations of each individual study, biases of these findings may have been introduced and these results should be interpreted with caution. The full potential roles of statins in endocrine-related gynecologic cancers should be evaluated further in large-scale prospective studies.

This meta-analysis was prepared according to the guidelines proposed by the Meta-Analysis of Observational Studies in Epidemiology (MOOSE) group [52].

We performed a systematic search using the databases of the Cochrane Central Register of Controlled Trials (CENTRAL), Embase, and PubMed to find all relevant articles from inception to January 2017. Both subject headings and free text words were used in the search. The detailed search strategies are presented in Appendix A. We searched the following trial registers electronically for potentially relevant ongoing trials: ClinicalTrials.gov (https://clinicaltrials.gov/), World Health Organization International Clinical Trials Registry Platform (ICTRP) (http://apps.who.int/trialsearch/), and ISRCTN registry (http://www.isrctn.com/mrct/). We also searched for conference reports from 2008 to 2016 by hand searching and electronic searching in the following sources: Biennial Meeting of the International Journal of Gynecological Cancer Society (IGCS), Biennial Meeting of the European Society of Gynecological Oncology (ESGO), Annual Meeting of the American Society of Clinical Oncology (ASCO), and Annual Meeting on Women’s Cancer of the Society of Gynecologic Oncology (SGO). In addition, we screened the reference lists of all of the retrieved articles for additional eligible studies. No language restriction was applied in our search strategy.

After conducting the search, 2 reviewers (W. X. and L. N.) removed duplicate records and screened the titles and abstracts independently. The potentially relevant references were evaluated in detail to determine their eligibility. Studies were considered in this meta-analysis if they met the following inclusion criteria: (1) randomized controlled trials (RCTs) or non-randomized studies; (2) evaluated the association between statin use and survival outcomes in gynecologic cancers; (3) evaluated at least 1 of the outcomes of interest, including overall survival (OS), disease-specific survival (DSS), progression free survival (PFS), and recurrence-free survival (RFS); (4) reported hazard ratio (HR) and a 95% confidence interval (CI), or provided data for their calculation. Articles were excluded if they were: (1) editorials, letters, reviews, and case reports; (2) studies without appropriate data that could be extracted or calculated. In cases of duplicate publications involving the same population, only the most comprehensive studies were included. Any disagreements in study selection were resolved by discussion between the 2 reviewers and, if needed, in consultation with a third reviewer (Y. H.).

Two reviewers (W. X. and L. N.) extracted data independently. The following data were collected from each study: publication data (i.e., the first author’s name, publication year, and study location), study design, publication type, type of cancer, sample size, definition of statin exposure, follow-up, HR and 95% CI, and adjusting factors. When multiple estimates of effect (HR) were presented, the most adjusted estimate was extracted; when an adjusted estimate was not available, the crude estimate was extracted. When the HR and 95% CI were not available, we estimated them indirectly from Kaplan-Meier curves using published methods [53, 54].

Three reviewers (W. X., L. N. and Y. H.) evaluated the methodological quality of the included studies independently. Since all of the included studies were non-randomized studies, their quality was assessed using the Newcastle–Ottawa scale [55], which uses a star system ranging from 0 to 9 stars. Studies that were awarded 7 or more stars were considered of high quality.

The HRs from each of the individual eligible studies were combined to form a pooled HR. Heterogeneity was measured using the Chi-square (χ2, or Chi2) and I2 tests. When significant heterogeneity (p value < 0.10 or I2 > 50 %) was found, a random-effects model was applied to calculate the pooled effect; otherwise, a fixed-effects model was used. Given the limited number of studies in the meta-analysis, we did not evaluate publication bias [56, 57]. All analyses were performed using Stata version 12.0 software (Stata Corporation, College Station, TX). For all tests, a two-sided p value less than 0.05 was considered statistically significant.

43. Manthravadi S, Shrestha A, Madhusudhana S. Impact of statin use on cancer recurrence and mortality in breast cancer: A systematic review and meta-analysis. Int J Cancer. 2016; 139:1281–1288.