Osteosarcoma (OS) is a common primary bone tumor in young adults and adolescents [1], which is characterized by a high metastatic potential: approximately 20–25% of newly diagnosed patients harbor detectable lung-related metastases [2, 3]. Moreover, the distal femur and proximal tibia are frequent metastatic locations for OS. Despite recent improvements in therapeutic strategies, including surgical, radiotherapy and neoadjuvant chemotherapy, the 5-year survival of patients with OS remains below 70% [4].

Small-cell osteosarcoma (SCO) is a rare subtype of OS and accounts for less than 1% of OS cases [5]. SCO is highly aggressive and frequently found in the metaphyses of long bones, which results in a poor prognosis. Histologically, SCO presents as small, round, primitive, and undifferentiated cells with osteoid production [6]. Moreover, SCO does not respond to radiotherapy and is more aggressive than other subtypes of OS [7]. Thus, novel therapeutic strategies for patients with SCO are urgently needed.

The etiologic factors and mechanism underlying the pathogenesis of OS are currently unclear. An increasing number of studies show that microRNAs (miRNAs) play important roles in the tumorigenesis and development of OS. miRNAs are small non-coding RNA molecules (18–25 nt) that increase or repress the expression of target genes [8]. Specifically, the down-regulation of miR-133a and miR-539 are associated with an unfavorable prognosis for patients suffering from OS [9]. Moreover, miR-664 acts as an oncogene and promotes the proliferation of OS cells by down-regulating the expression of FOXO4. In addition, miR-664 promotes OS cell invasion and migration by suppressing the expression of SOX7 [10, 11]. Osteopontin is a phosphorylated glycoprotein involved in the invasion of OS cells, and the suppression of miR-4262 in OS cells promotes osteopontin-mediated cancer invasion [12]. Furthermore, the down-regulation of miR-26a and up-regulation of miR-27a reportedly contribute to the aggressiveness of OS, and low miR-26a expression and high miR-27a expression are associated with advanced TNM stage, tumor grade, and distant metastasis in patients with OS [13].

SCO is an exceedingly rare subtype of OS associated with a poor prognosis. However, the mechanism underlying the pathogenesis of SCO is unclear, and previous studies of SCO are case reports due to the rarity of this disease. In this study, high-throughput RNA sequencing was performed to obtain the miRNA and mRNA expression profiles of peripheral blood mononuclear cells (PBMCs) from patients with SCO to identify genes that are differentially expressed in these patients compared with healthy individuals and explore potential diagnostic biomarkers for SCO.

Genes dysregulated in patients with SCO compared with healthy individuals 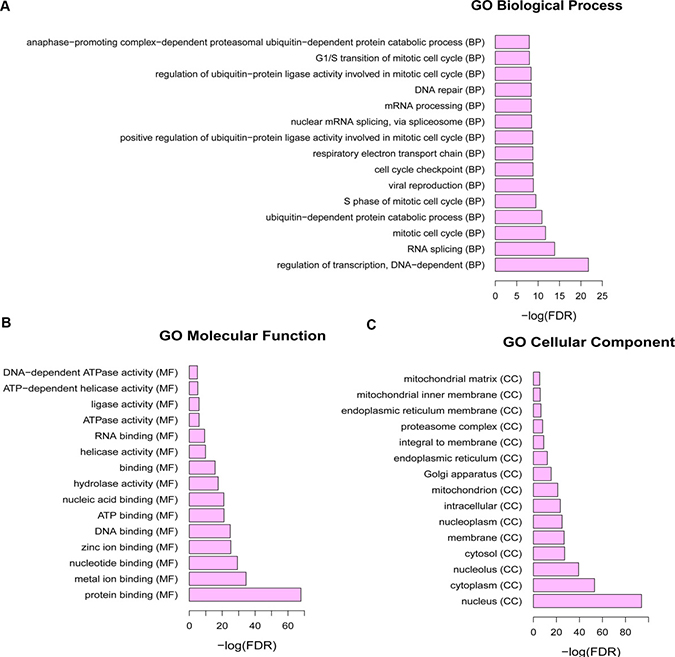 KEGG is a knowledge database for the systematic functional analysis of genes to connect genomic information with higher functional information by computerizing current knowledge on cellular processes and standardizing gene annotations. Thus, KEGG analyses were performed to assign pathways and functionally classify genes that are dysregulated in SCO. An FDR < 0.05 was defined as significant KEGG pathway enrichment. As shown in Table 3, pathways in cancer, mTOR signaling, oxidative phosphorylation, cell cycle, apoptosis, and DNA replication were significantly enriched KEGG pathways.

The regulatory network of miRNA target genes in SCO 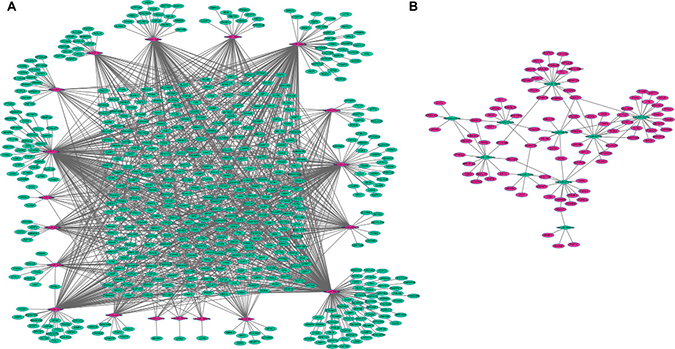 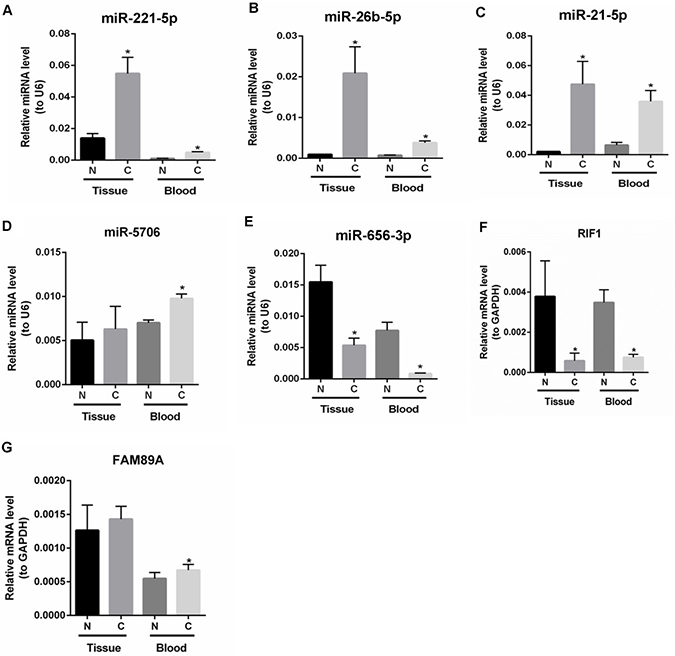 miRNAs are endogenous, small non-coding RNAs that participate in the regulation of diverse cellular processes, including cell growth, cell differentiation, apoptosis and the immune response, by binding to the 3’ untranslated region of certain subsets of messenger RNAs. A growing body of evidence demonstrates that the abnormal expression of miRNAs might serve as a potential diagnostic and prognostic biomarker for cancers [14].

hsa-miR-26b-5p was significantly up-regulated in the PBMCs from patients with SCO compared to healthy control patients. In the miRNA-target gene interaction network, miR-26b-5p exhibited the highest connectivity with miRNAs and regulated the expression of 197 target-genes. Specifically, miR-26b-5p is reportedly down-regulated in OS tissue and cells [15, 16] and inhibits OS cell proliferation, migration, invasion and apoptosis by down-regulating the expression of PFKFB3 [15]. Moreover, miR-26b inhibits OS cell metastasis by suppressing the expression of CTGF and Smad1 [17]. Huaier (Trametes robiniophila murris) is a fungus used in traditional Chinese medicine and suppresses cell proliferation and induces apoptosis in human lung cancer cells by up-regulating miR-26b-5p [18]. miR-26b plays important roles in the proliferation and metastasis of various cancer types, such as epithelial ovarian carcinoma, hepatocellular carcinoma and prostate cancer [19–21]. FASLG is one of top 20 down-regulated genes in SCO and targeted by miR-26b. Moreover, FASLG encodes Fas ligand, which is a member of tumor necrosis factor superfamily. FAS then triggers cell apoptosis by binding to FASLG. The FAS/FASLG signaling pathway is essential for immune system regulation, including activation-induced T cell death and cytotoxic T lymphocyte-induced cell death. In our study, miR-26b-5p was up-regulated in the PBMCs of patients with SCO and targeted FASLG, which may play a key role in the immune response to SCO.

Furthermore, hsa-miR-221-3p was significantly down-regulated in the PBMCs from patients with SCO. In the miRNA-mRNA regulatory network, miRNA-221 exhibited high connectivity with several mRNAs and targeted 18 mRNAs, and the expression levels of miR-221 in tumor tissue, cell lines and the sera from patients with OS are reportedly dramatically up-regulated. Thus, serum miR-221 may serve as a diagnostic and prognostic marker for OS [22, 23]. Moreover, miR-221 enhances the proliferation, invasion and migration of OS cells by suppressing PTEN expression [22]. TIMP3 is one of top 20 up-regulated genes in SCO and targeted by miR-221. TIMP3 encodes TIMP metallopeptidase inhibitor 3, an inhibitor of matrix metalloproteinases, which are involved in the degradation of the extracellular matrix. TIMP3 is hypermethylated in OS tumor tissues compared with normal tissues [24] and has been identified as a tumor suppressor that plays essential roles in the inhibition of tumor angiogenesis. The down-regulation of miR-221/222 significantly increases the expression of TIMP3 and enhances the sensitivity of breast cancer cells to tamoxifen [25]. TIMP3 expression also predicts favorable survival in HCC [26]. In our study, miR-221-3p was down-regulated and targeted TIMP3 in the PBMCs of patients with SCO, which suggested that miR-221-3p and TIMP3 play essential roles in the immune response to SCO.

hsa-miR-125b-2-3p is one of the top 2 significantly down-regulated miRNAs and targeted 13 mRNAs, including PTGFRN (one of the top 20 up-regulated mRNAs) in the miRNA-mRNA regulatory network of SCO. PTGFRN encodes prostaglandin F2 receptor inhibitor, and the expression of PTGFRN correlates with the metastatic status of human OS [27]. However, the biological functions of miR-125b-2-3p and PTGFRN are unclear and need to be elucidated.

The expression levels of candidate miRNAs and mRNAs in peripheral blood samples from patients with SCO were verified by qRT-PCR. In general, the qRT-PCR results were consistent with the RNA sequencing and bioinformatics analyses. However, our study was also subject to limitations. First, the SCO tumor sample size for the RNA sequencing and qRT-PCR validation analyses were small due to the rarity of SCO. Second, the expression levels of candidate miRNAs contradicted previously published results. Thus, the biological roles of these miRNAs need to be explored in vivo and in vitro to elucidate their roles in the tumorigenesis of SCO.

In conclusion, we constructed an miRNA-mRNA regulatory network by identifying miRNAs and target genes that are differentially expressed in the PBMCs of patients with SCO compared to healthy individuals. In this regulatory network, hsa-miR-26b-5p, hsa-miR-221-3p and hsa-miR-125b-2-3p were significantly dysregulated and exhibited high connectivity with target genes. Thus, these miRNAs may play essential roles in the initiation and development of SCO, but their biological roles in SCO tumorigenesis require further exploration. Moreover, a clinical study based on a large cohort of patients with SCO is essential to validate the diagnostic value of these miRNAs.

The raw RNA-sequencing reads were stored in FASTQ format. The raw reads containing adapter sequences and low-quality sequences (reads with ambiguous bases ‘N’) were removed using FASTx-tool SeqPrep (https://github.com/jstjohn/SeqPrep) and Sickle (https://github.com/najoshi/sickle). Clean reads were aligned with the UCSC human reference genome (build hg19) using TopHat v1.3.1 [35]. Sequences were matched to miRNAs using the miRDeep2 tool and miRBase (release 21) (http://www.mirbase.org/). Aligned read files were then processed by Cufflinks v1.2.1 [36], which measured the relative expression of the genes with the normalized RNA-Seq fragment counts. Fragments per kilobase of exon model per million mapped reads (FPKM) were used to present the expression level of gene. The transcripts differentially expressed in SCO were identified, and P-values < 0.05 and < 0.01 indicated differentially expressed mRNA and miRNA, respectively.

The biological roles of differentially expressed genes were predicted using the GeneCoDis3 (http://genecodis.cnb.csic.es/analysis) database to describe the gene ontology (GO) and Kyoto encyclopedia of genes and genomes (KEGG) pathways [37, 38]. An FDR < 0.05 was set as the cut-off for selecting significantly enriched GO terms and KEGG pathway.

The target-genes of differentially expressed miRNAs were predicted using the miRWalk database (http://www.umm.uni-heidelberg.de/apps/zmf/mirwalk/), in which the correlations between target-genes and miRNAs have been experimentally confirmed in vivo and in vitro [39]. We used 6 algorithms, RNA22, miRanda, miRDB, miRWalk, PICTAR2 and TargetScan, to predict the target-genes of miRNAs; if more than 4 of 6 algorithms predicted the same gene for an miRNA, the gene was identified as a target-gene of that miRNA [39]. The interaction network of differentially expressed miRNAs and target-genes were constructed using the Cytoscape software (http://cytoscape.org) [40].

To validate the expression levels of dysregulated genes in SCO, tumor tissues and peripheral blood samples were obtained from other 3 patients with SCO and 3 healthy individuals. Total RNA was extracted from tissues samples and peripheral blood samples using TRIzol reagent (Invitrogen, CA, USA) according to the manual instructions. The ReverTra Ace qPCR RT Master Mix Kit (TOYOBO, Shanghai, China) was used to synthesize cDNA, and qRT-PCR reactions were performed using SYBR® FAST qPCR Kits (KAPA bio, Boston, USA) on a LightCycler 480 (Roche Indianapolis, IN, USA). U6 and GAPDH were used as internal controls for miRNA and mRNA detection, respectively. The relative expression levels of target genes were calculated using ΔCT method, and the mean ± standard deviation and independent samples t-test were used in the statistical analysis. P < 0.05 was considered significant. The PCR primers used are shown in Supplementary Table 1.