Efficacy and safety of different molecular targeted agents based on chemotherapy for gastric cancer patients treatment: a network meta-analysis

Increasing numbers of reports have been published to demonstrate that molecular targeted agents are able to improve the efficacy of chemotherapy in gastric cancer. This network meta-analysis aimed to evaluate the efficacy and safety of different molecular targeted agents, which were divided into six groups based on the targets including hepatocyte growth factor receptor (c-MET), vascular endothelial factor and its receptor (VEGF/VEGFR), human epidermal growth factor receptor 2 (HER2), epidermal growth factor receptor (EGFR), mammalian target of rapamycin (mTOR) and tyrosine kinase inhibitor (TKI). These six groups of targeted agents were evaluated for their efficacy outcomes measured by overall survival (OS), progression-free survival (PFS) and overall response rate (ORR). While their safety was measured 7 adverse events, including fatigue, anaemia, vomiting, neutropenia, thrombocytopenia, diarrhea and nausea. A total of 23 articles were included after extensive searching and strict inclusion, HER2 and VEGF(R) turned out to be the two most effective targeted drugs for their outstanding performance in OS and PFS. However, they were associated with severe adverse events, including fatigue, neutropenia and diarrhea. Therefore, they should be used with caution during their application. In conclusion, VEGF(R) and HER2 have the potential to be the optimal target agents for their survival efficacy, while the adverse events associated with them should be paid attention in application.

Gastric cancer (GC), also known as stomach cancer, is a malignant tumor caused by environmental and genetic factors. Although the incidence and mortality of GC have extremely decreased since the 21st century, it is still the fourth major cause of cancer deaths [1]. In 2016, the number of expected new cases is 26,370 in US, with 10,730 expected deaths [2]. The epidemic nature and high mortality of GC have driven researchers to assess the relative efficacy of various treatments. Surgery has been identified to be curative for early stage patients, and preoperative or postoperative chemotherapy and chemoradiotherapy can improve the remedy [3]. However, about 60% of the patients are diagnosed after 65 years old, when surgery is considered to be risky [4]. Thus, chemotherapy is widely used as a major treatment for its applicability to almost all patients.

Recently, it was reported that molecular targeted agents are able to significantly reinforce the efficacy of chemotherapy [5]. Several molecular targets and medications have been researched and combined with chemotherapy. One group of target molecules includes vascular endothelial growth factor (VEGF) and vascular endothelial factor receptor (VEGFR), both of which facilitates in the angiogenesis and metastasis of GC [6]. Another group of targets is related to epidermis. For instance, human epidermal growth factor receptor 2 (HER2) could stimulate the proliferation of tumor cells, and its overexpression triggers the development of cancer [7]. Epidermal growth factor receptor (EGFR) could also activate the macrophage in nonspecific immunity [8]. In addition, the mammalian target of rapamycin (mTOR) contributed to cellular apoptosis and proliferation [2]. Tyrosine kinase inhibitor (TKI) prohibits the expression of tyrosine kinase in order to stop the signal transduction for proteins [9] Hepatocyte growth factor receptor (HGFR) is encoded by c-MET gene and accelerates epithelial–mesenchymal transition [2]. By using these target agents in chemotherapy, the efficacy could be multiplied.

Several reports have been published to illustrate the efficacy of molecular targeted treatment. A study in Japan reported that the use of Bevacizumab, an antibody of VEGF, could significantly increase progression-free survival (PFS). Ramucirumab, an antibody of VEGFR, was proved to be able to increase the overall survival (OS) rate in combination with paclitaxel [10]. TKI plus docetaxel would promote the overall response rate (ORR) compared to the monotherapy of docetaxel [11]. Although EGFR and mTOR targeted agents did not seem to significantly improve the effect of chemotherapy, these agents provided a new method for GC treatment. However, despite desirable results targeted therapies may bring, they were also associated with adverse events. According to the US National Cancer Institute (NCI), these alternative treatments may produce grade 3–4 adverse events [12]. Hence, in order to amplify the efficacy of chemotherapy while reduce severe adverse events as many as possible, this network meta-analysis (NMA) was designed to compare the relative efficacy and safety of different targeted agents in combination with chemotherapy and aimed to select an optimal targeted drug.

As shown in Figure 1, through extensive searching and exclusion, 23 articles with 4,109 patients were finally obtained [1–3, 11, 13–31]. The baseline characteristics of all included studies shown presented in Table 1. All the 23 studies involved patients with advanced cancer, while some with metastatic cancer or unresectable caner. 12 of the studies were associated with first-line chemotherapy while 8 of them were associated with second-line chemotherapy. All the studies compared targeted agents with placebo (in combination with chemotherapy), with 11 for anti-VEGFR, 7 for anti-EGFR, 3 for anti-HER2, 2 included TKI, 1 for anti-mTOR and another one for anti-MET (Figure 2). 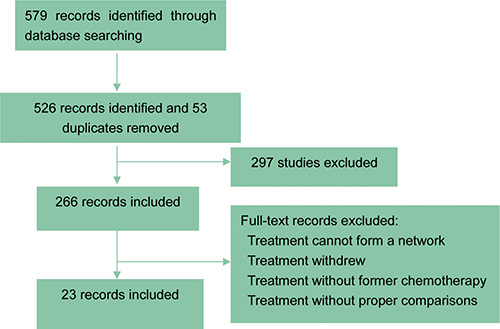 Figure 1: Flow charts of included studies. The searching and exclusion process was illustrated. 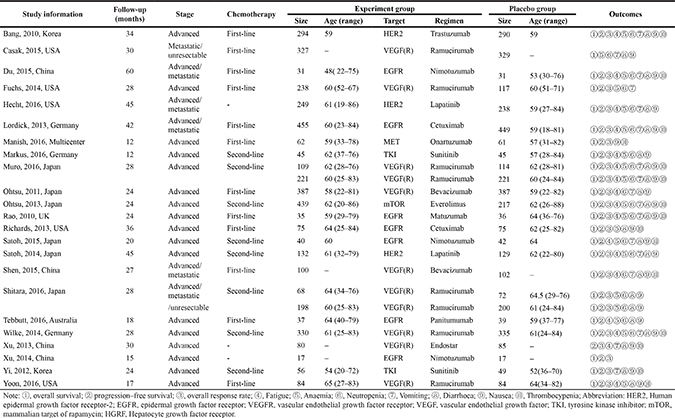 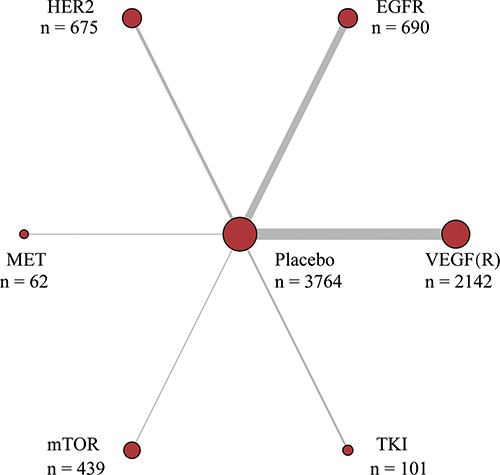 Figure 2: Network plot of molecular targeted agents for gastric cancer. The width of the lines is proportional to the number of trials comparing each pair of treatments target; the area of circles represents the cumulative number of patients for each intervention. 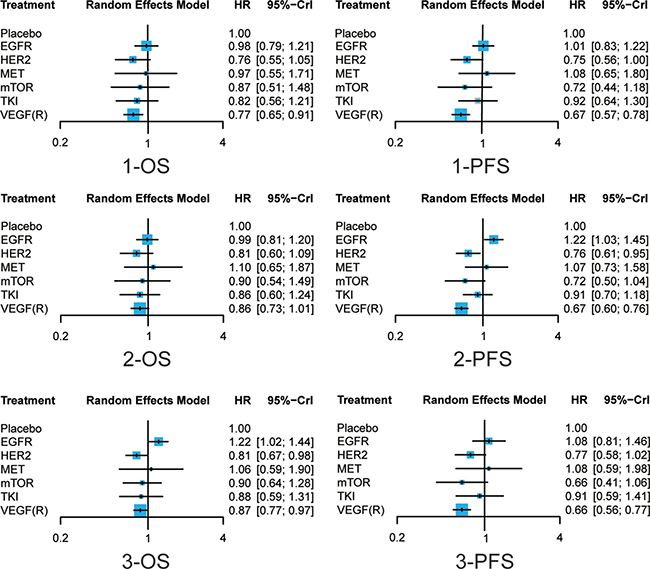 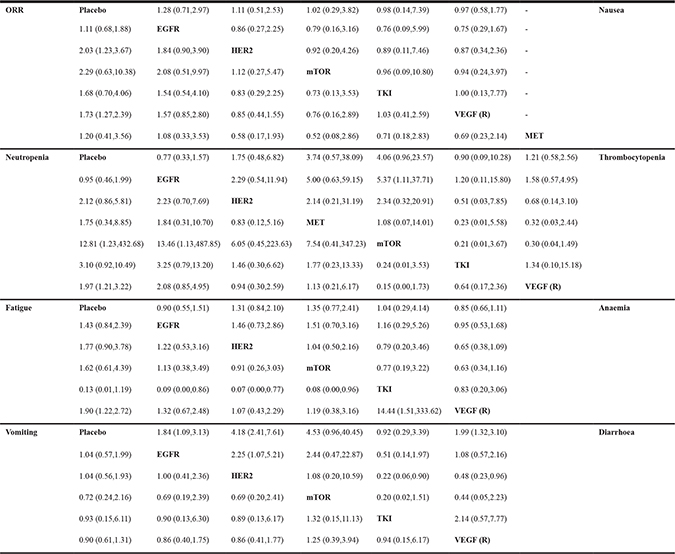 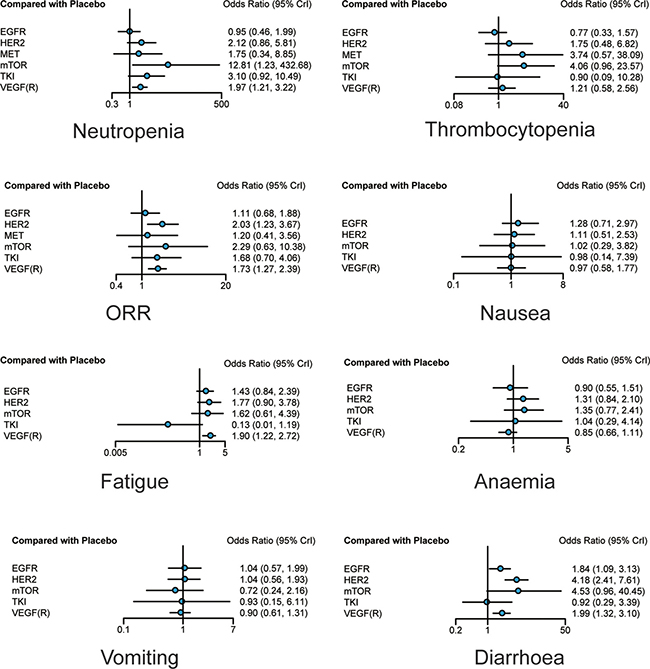 Ranking of molecules of targeted therapy 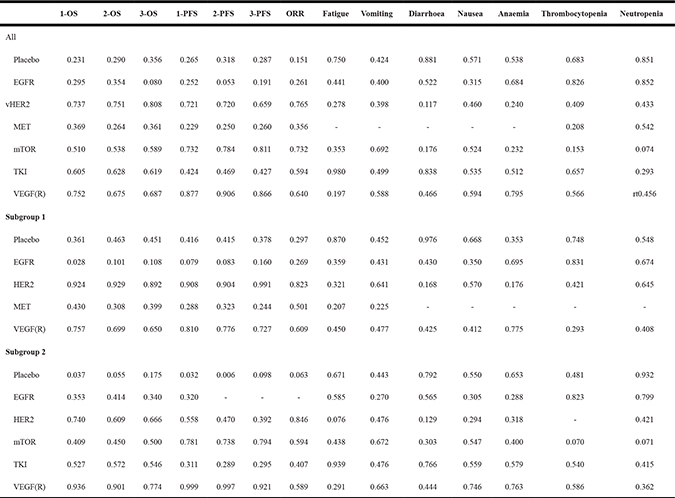 The estimate of publication bias was performed by the symmetry characteristics of the dots representing included trials with different colors in the funnel plots. According to Supplementary Figure 5, all of the funnel plots were focused in the triangle funnel areas in left and right directions, which suggested that the distribution of dots verified no significant publication bias or small study effect among ORR and all adverse events.

In the present study, an NMA was performed to evaluate the safety and efficacy of different molecular targeted therapies including VEGF(R), EGFR, HER2, mTOR and TKI in combination with chemotherapy for patient with GC.

According to the results of this NMA, therapies targeting HER2 or VEGF(R) outperformed others with respect to survival outcomes and response rate, which was supported by previous studies A study conducted by Badiani et al. reported that patients treated with the above therapies exhibited significantly longer PFS, increased likelihood of disease control and enhanced ORR [32]. However, according our results, these two drugs were associated with higher risk of fatigue and diarrhea, which was also confirmed in other trials. For example, a study conducted by Bang et al. reported that HER2 invited more diarrhea and fatigue events [13], and another study designed by Fuchs et al. proved that VEGFR led to similar results [20]. Therefore, treatment recommendation should be made with caution.

Apart from VEGF(R) and HER2, agents targeting m-TOR also yielded desirable results in terms of survival and response rate, and similarly, it may lead to serious adverse events such as neutropenia and diarrhea. However, the role of m-TOR may need to be justified further since only one of the included studies covered the analysis of m-TOR, and the same with MET.

Although conducted as meticulously as possible, this NMA still has some limitations. First of all, it is inevitable that the reliability this study may be diluted by heterogeneity. For example, different chemotherapy treatments may results in different survival outcomes and adverse events. A study conducted by Koizumi et al. reported that the use of S-1 plus cisplatin yielded more satisfying results with respect to OS [8]. This is probably why the performance of HER2 in second-line chemotherapy was not as desirable as that in first-line chemotherapy. Secondly, we did not conduct a stratified or subgroup analysis due to the shortage of evidence. Some included studies did not report any information about tumor stage, type or specific dosage in the chemotherapy, which may weaken the reliability of corresponding results and conclusions. On top of that, we discovered that some of the eligible studies did not implement any blinding procedures. Thus, the quality of studies may be suspected and the overall effect size may be biased. Finally, our study did not include any approach to assessing the potential publication bias and we did not include any unpublished studies or articles in which the effect size may be different from that in ours.

However, despite all the limitations, our study contained several strengths with respect to study design and evidence synthesize. Unlike other meta-analysis or NMA that usually contains literatures in the last two decades, all of the included studies were carried out between 2010 and 2016, which contributed to the reliability and clinical significance of this article. A typical issue often arises from the fact that the control of confounding factors is lost when evidence is synthesized from individual studies. For instance, age is usually a significant risk factor in epidemiology. If confounding factors such as age are not controlled, the association between other risk factors and diseases may be significantly altered. The median age of GC patients in our study did not appear to be distributed in a wide range and this phenomenon may also reduce the degree of heterogeneity. Another major distinctive feature of our study came from the approach when evidence was synthesized. Unlike other meta-analysis or NMA, in which evidence was synthesized by the specific treatments, our study combined evidence based on a specific pathway of each target agents. This novel approach helped us determine which pathway is appropriate to be targeted in order to enhance the efficacy or safety of chemotherapy.

In summary, VEGF(R) and HER2 were the best two targeted therapies for GC, due to their high performance of efficacy outcomes whereas their adverse events should also be paid more attention. M-TOR may serve as alternative choice for its good performance with respect to survival outcomes, however, due to the lack of evidence, its role need to be further identified.

The following inclusion criteria were adopted: (1) studies must be RCTs; (2) targeted agents should be used in combination with chemotherapy ; (3) patients should be diagnosed with GC; (4) studies should cover at least one of the included outcomes The articles were excluded according to the following rules: (1) treatments cannot form a network; (2) treatment withdrew; (3) treatment without former chemotherapy; Once the included study list was finalized, the Jadad Scale was used to assess the quality of included studies (Supplementary Table 3) [33].

Two investigators independently searched the relevant data from eligible articles. In order to enhance the reliability and accuracy, a third party was involved to solve discrepancy. The following information is extracted: author, publication year, country, sample size, median age, target, treatments and outcomes, including OS and PFS of 1 year, 2 years and 3 years, ORR and 7 adverse events Among them, 1-year and 2-year survival were defined as short-term survival outcomes while 3-year and 5-year survival were long-term outcomes. Both survival outcomes and ORR were used to measure the relative efficacy of different target agents, while adverse events were used to measure their safety.

In this NMA, the odds rates (ORs) with corresponding 95% credible intervals (CrIs) were utilized to measure response outcomes and adverse events. The hazard ratios (HRs) with 95% CrIs were used to assess the long-term prognostic factors outcomes. Furthermore, surface under the cumulative ranking curve (SUCRA) was calculated to illustrate the ranking probability of each treatment under different endpoint, with higher values indicating better efficacy or safety.

ZR, JPS and QXG Literature search, data extraction and manuscript writing; ZR and JPS: Statistical analysis; ZR, JPS and XFS: Manuscript revision and experimental design. HTH, KL and QXG are responsible for the overall content as the guarantor. All authors have read and approved the final manuscript.

All authors declare no compete interests.