Objectives: This study was intended to analyze effects of miR-199a-3p and Smad1 on proliferation, migration and invasion of prostate cancer (PCa) cells.

Materials and methods: The PCa tissues and their adjacent normal tissues were collected from 54 PCa patients. Expressions of miR-199a-3p and Smad1 mRNA in tissues and cells were evaluated with real-time quantitative polymerase chain reaction (RT-qPCR), and immunohistochemistry assay was used to detect Smad1 protein expressions. The target relationship between miR-199a-3p and Smad1 was assessed by luciferase reporter assay. The PCa cell lines (i.e. PC-3 cells) were transfected with miR-199a-3p mimics and Smad1-cDNA. MTT and Transwell assays were applied to detect proliferative, migratory and invasive abilities of PCa cells.

Prostate cancer (PCa) is the second major cause of cancer-related deaths among American males, and the proportion of it among all cancers achieves up to 43% [1, 2]. Although the survival rate of the clinically localized PCa patients has been increasing owing to treatments of surgery and radiotherapy, the recurrence rate of PCa within 5 years remains high at 25% [3, 4]. As a result, the molecular mechanisms underlying PCa development need to be further explored, which allows us to find novel therapeutic targets for PCa.

MicroRNAs (miRNAs), a kind of short non-coding RNAs that are approx 22–25nt long, can modify mRNA translations within carcinogenic pathways through binding to 3′-UTR region of the target mRNA [5–7]. Accumulating studies have also demonstrated remarkable associations of miRNAs expressions with occurrence and progression of PCa [8–11]. Specifically, it was indicated that miR-345 was differentially expressed between PCa and benign prostatic hypertrophy based on miRNA microarray analysis [12]. Wang et al. reported that serum miR-19 and miR-519c-5p levels can predict negative pathology of PCa patients [13]. In addition, miR-199b might impose inhibitive effects on PCa development since lower miR-199a expressions were observed with aggravation of PCa [14, 15].

Interestingly, miR-199a directly targeting Smad1 (Gene accession number: X69881) was demonstrated to modulate the activation of pancreatic stellate cells (PSCs) and PSC-induced pro-tumoral effects in pancreatic cancer [16]. Besides, Lin et al. also indicated that miR-199a is a BMP2 reactive miRNA which negatively regulated the differentiation of early chondrocyte by directly targeting Smad1 transcription factors [17]. In fact, Smad1 not only served as a substrate of mitogen-activated protein kinases (MAPKs), but also exerted a major role in transferring signals from bone morphogenetic proteins (BMPs), thereby inducing development of various disorders, including PCa, fibrosis, cardiovascular diseases and so on [18–22]. Furthermore, the ALK2/Smad1 pathway activated by endoglin was found to inhibit motility of PCa cells, and down-regulated Smad1 expressions due to target of miR-345 could inhibit growth, invasion and migration of human PCa cells [12, 23]. Thus, the synthetic effects of miR-199a and Smad1 were hypothesized to be correlated with PCa development.

However, this research pointed that whether miR-199a-3p might regulate PCa development by targeting Smad1 was still lacking up to now. In the present study, we conducted comprehensive research on the molecular effect of miR-199a-3p targeting Smad1 on the proliferation and invasion of PCa cells.

The expression of miR-199a-3p was significantly lower in PCa tissues than in adjacent normal tissues (P < 0.05) (Figure 1A). As displayed in Figure 1B–1C, the proportion of positively expressed Smad1 cells in PCa tissues (75.9%) significantly exceeded that in adjacent normal prostate tissues (12.9%). In addition, significantly down-regulated miR-199a-3p expressions and elevated Smad1 expressions were observed in PCa cell lines (i.e. LNCaP, PC-3 and DU145) in comparison to the normal prostate epithelial cell line (i.e. RWPE-1) (P < 0.05) (Figure 1D–1E). As PC-3 cells had higher expression of miR-199a-3p, it was used to perform subsequent cell experiments. 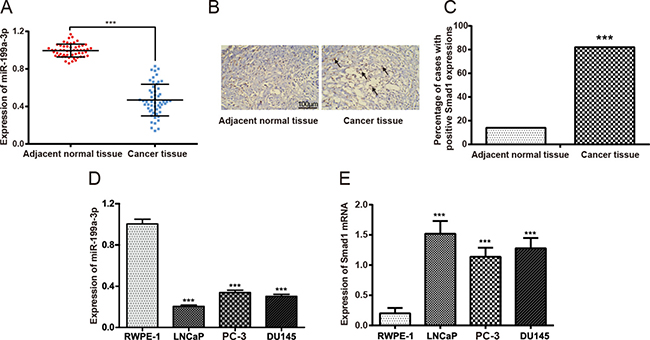 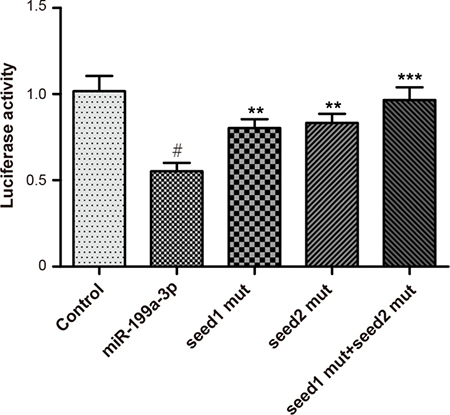 Significantly constrained proliferation of PCa cells transfected with miR-199a-3p mimics was observed when compared with the normal control group (P < 0.05) (Figure 3). Nonetheless, addition of Smad1 can reverse the inhibitory effects of miR-199a-3p on proliferation of PCa cells (P < 0.05). Moreover, no notable difference regarding motility of PCa cells was present among the blank group and normal control group at each time point (all P > 0.05). 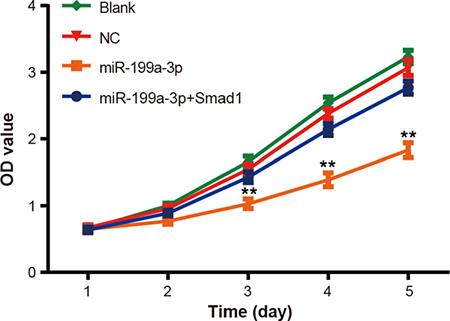 Figure 3: The effect of miR-199a-3p overexpression on PC-3 cell proliferation was evaluated by MTT assay. Data were presented as mean ± SD. **P < 0.01 compared with NC group. 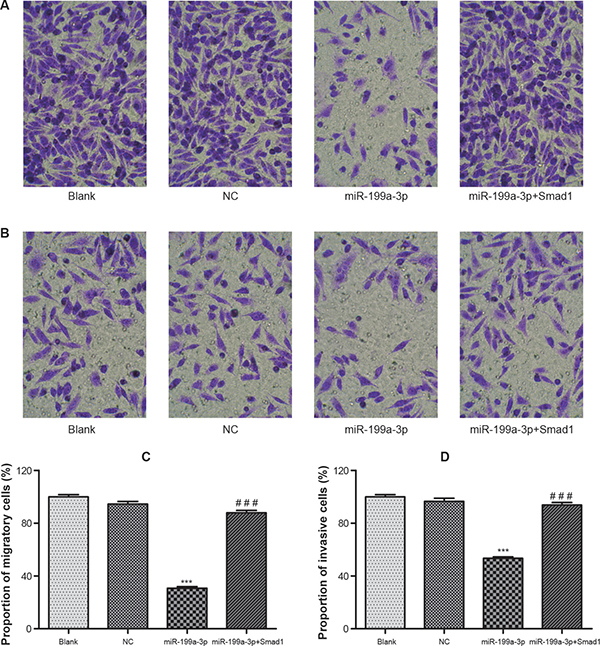 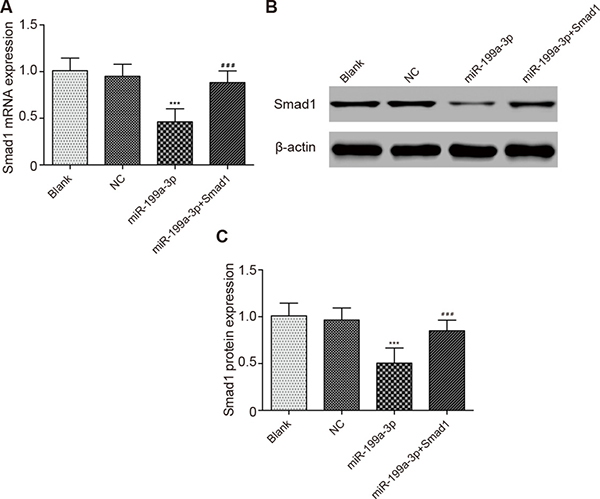 Notably, miRNA-199a could trigger tumor progression through inhibiting functions of MMP9, a protein that could degrade the extracellular matrix [27]. Additionally, the reduction in miR-199a-3p expressions and thereby non-suppression of mammalian target of rapamycin (mTOR) could result in advanced forms of cancers [28]. A documentary also showed that miR-199a could serve to regulate metastasis of PCa cells through transforming growth factor-beta1 (TGF-β1)-dependant way [29]. Similarly, our study found that the expression level of miR-199a-3p was significantly lower in PCa tissues than that in adjacent normal tissues. We also discovered that expressions of miR-199a-3p in LNCaP, DU145and PC-3 cell lines were significantly decreased compared with human normal prostate epithelial cells. Besides, over-expressed miR-199a-3p suppressed the proliferation and invasion of PCa cells, implying that miR-199a-3p potentially played a restrained role in PCa development.

Smad proteins were recognized as central modulators of TGF-β and BMP signaling pathways, which modulated cell growth and differentiation [30, 31]. It was found that miR-155 decreased Smad1 and Smad5 expressions in the lung epithelial cell line A549, modulating the cyclin-dependent kinase suppressor p21 [32]. In addition, Liu et al. provided evidence that the Smad1/Akt/GSK3β pathway was related with Nanog expression induced by Snail and cancer stem cell-like transformation in non-small-cell lung cancer cells [33]. In our study, we found that the expression of Smad1 was significantly higher in PCa tissues than in adjacent normal tissues. Moreover, the expressions of Smad1 and Smad1 mRNA were both reduced after transfection of PC-3 cells with miR-199a-3p.

However, there still existed some limitations in our experiments. For example, only 54 pairs of clinical samples and one human PC cell line PC 3 were used to detect the influence of miR-199a-3p targeting Smad1 on tumor proliferation, migration and invasion. And it was necessary to study the relative molecular pathway, as miR-199a-3p had other targeting gene. Hence, the mechanism of miR-199a and Smad1 on development and progression of PCa needs to be studied further. In conclusion, miR-199a-3p exerts anti-growth, anti-invasion and anti-migration effects on human PCa by partially down-regulating Smad1, suggesting that miR-199a-3p might be a potential diagnostic and therapeutic target for patients with advanced PCa.

Smad1 protein expression was detected with PV-9000 two-step immunohistochemical method according to manufacturers’ instructions (ZSGB-BIO Cor., Beijing; catalog number: PV-9000). Specifically, conventional dewaxing and antigen microwave thermal retrieval were performed on four-micron-thick serial sections of formalin-fixed and paraffin-embedded tissues. The sections were incubated in 3% hydrogen peroxide to block endogenous peroxidase activity. Primary antibodies (Rabbit anti-human Smad1 polyclonal antibody, 1:400) (Bioss Cor., Beijing; catalog number: bs-1619R) were applied to sections at 4°C and refrigerated overnight. The sections were incubated for 20 minutes at room temperature after addition of polymer helper and incubated for another 30 minutes at room temperature after applying secondary antibodies (Bioss Cor., Beijing; catalog number: bs-0295M-HRP). The reaction product was visualized by incubation with the substrate/chromogen 3,3′-diaminobenzidine (DAB). Finally, the sections were counterstained with hematoxylin (0.02%). Phosphate buffer solution (PBS) was served as the negative control (NC). Each couple of sections, respectively, included one prostate cancer tissue and one adjacent tissue of the same patient. The five couples were randomly selected from five patients. Five random fields were selected from each slice (×400) to record positive cell number under an optical microscope (magnification, ×400; BX51; Olympus Corporation, Japan). The counting field would be selected if more than 100 cells were present therein. Smad1 expressions would be regarded as 1) positive (+) when more than 10% cells were immuno-reactive, and 2) negative (−) when the proportion of immuno-reactive cells was less than 10%. The results of immunohistochemistry were recorded and calculated blindly by two investigators.

When the density of transfected cells reached about 80%, cells were washed for 2 times using PBS. After being digested with trypsin into cell suspension, cells were inoculated into 96-well plates. Each well (volume: 200 μL) included 3 × 103–6 × 103 cells, and a total of 6 wells were replicated. Subsequently, MTT (20 μL, 5 mg/mL, Sigma, USA) was placed into each well and the cells were then cultured in an incubator with 5% CO2 at 37°C for 4 h. Dimethyl sulfoxide (DMSO, 150 μL) was added to each well and cells were gently shaken for about 10 minutes in order to dissolve the crystal. A microplate reader was used to detect the absorbance value of each well at a wavelength of 490 nm at the same time of five days. The experiment was repeated for three times.

After 72 h of transfection, cells were placed in the upper chamber, and FBS-containing medium was put in the lower chamber as a chemoattractant. Cells were incubated in the 5% CO2 chamber at 37°C for 48 h. Non-migratory cells on the upper surface of the membrane were scraped off with cotton swabs. Cells that migrated to the bottom of the membrane were stained for 30 min (Costar Corporation, USA), and the stained cells were viewed under the optical microscope (Nikon, Japan). Five randomly selected fields were quantified using × 200 magnification, and the average number of cells was calculated.

Transwell invasion was performed utilizing 24-well Transwell plates with 8 μm pores, and coating Matrigel (BD Bioscience, US) was introduced to measure the invasive conditions of cells. Briefly, cells were trypsinized and resuspended in a serum-free medium after 48-hour transfection. A total of 2 × 104 cells were added to the upper transwell chamber, and then complete RPMI-1640 medium (volume: 0.5mL) was added into the lower chamber as the chemoattractant. After cells were incubated at 37°C for 24 h, non-invasive cells in the top chamber were removed by cotton swabs. Invasive cells at the bottom of the membrane were fixed with methanol and then stained with crystal violet. The number of invasive cells was finally counted.

Total RNA extraction was conducted with aid of Trizol reagent kit (Ambion, USA) in line with the manufacturers’ descriptions. After added poly(A) tail on miRNA, the cDNAs were acquired based on oligo(dT)18 primers and M-MLV reverse transcriptase utilizing the reverse transcription Kit (Fermentas, Canada). RT-qPCR assay was conducted with qPCR instrument (Fermentas, Canada) to detect relative expression levels of miR-199a-3p and Smad1 mRNA. The primers synthesized by Invitrogen were displayed in Table 1. The reaction conditions were set as follows: 1) pre-degeneration at 95°C for 10 minutes, 2) degeneration at 95°C for 10 seconds, and 3) annealing at 60°C for 20 seconds and extension at 72°C for 35 seconds. The relative expression quantity was calculated using the 2−△△Ct method. The experiment was replicated for three times.

FQ, HL and HH designed and performed the research; XY, TY, JZ and YY conducted the experiments; XL, CJ and LF analyzed and interpreted the data; FQ, HG and WG wrote the manuscript and approved the final version.

This work was supported by National Natural Science Foundation of China (81572512) and Medical Science and Technology Development Foundation, Nanjing Department of Health (YKK15081).

54 PCa patients included were treated with radical prostatectomy without any history of preoperative chemotherapy or radiotherapy which was approved by the Affiliated Nanjing Drum Tower Hospital, Medical School of Nanjing University.