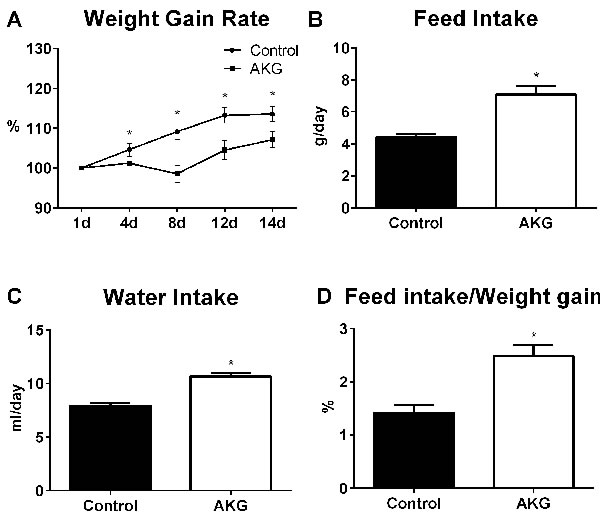 Collectively, AKG supplementation affects the intestinal microbiota by changing the microbial composition in mice. In particular, a shift in the Firmicutes-to-Bacteroidetes ratio to favor Bacteroidetes in the feces was observed. 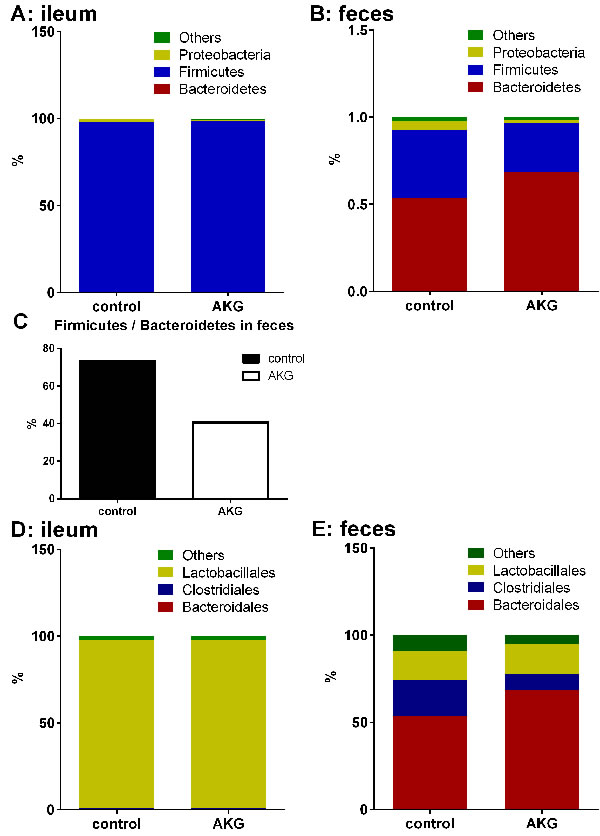 We analyzed the expression of intestinal pro-inflammatory cytokines (e.g. Il-17 and Ifn-γ) and innate immune factors, such as immunoglobulin joining chain (J-chain), polymeric immunoglobulin receptor (pIgR), mucin-2 (Muc2), mucin-4 (Muc4), cryptdins-1 (Crp1), cryptdins-4 (Crp4), cryptdins-1 (Crp5), and lysozyme 2 (Lzy2) in the ileum in this study. The results showed that AKG supplementation increased the mRNA abundance of Crp1, 4, and 5 (P < 0.05), but reduced the expression of Muc4 (P < 0.05). Interestingly, AKG supplementation significantly inhibited the expression of Crp1 and Crp5 in antibiotic-treated mice (P < 0.05). Thus, the influence of AKG in intestinal innate immunity depends on the intestinal microbiota. 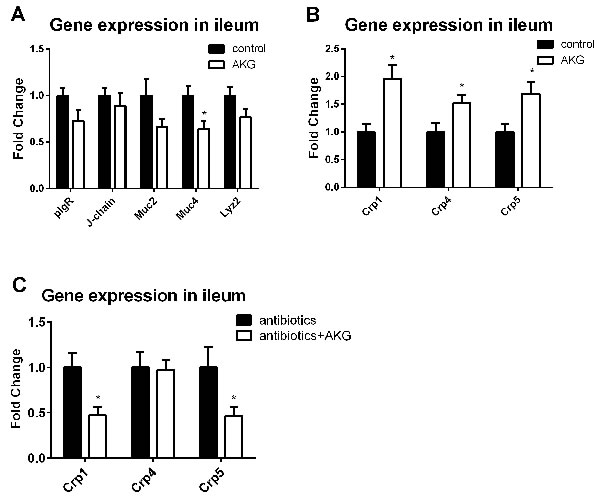 AKG plays multiple roles in cellular metabolism, such as regulating amino acid concentration, inhibiting protein catabolism and enhancing protein synthesis [12] and controlling lipid levels [13]. Exogenous AKG can be rapidly transaminated to Glu, Gln, Arg, proline and other amino acids [14, 15]. On the other hand, Glu can be synthesized from Gln or Arg, and Glu is also converted to AKG by glutamate dehydrogenase in the liver, brain or other organs [16, 17]. Our previous reports demonstrated that dietary Arg and Gln influenced growth performance in various conditions of dyshomeostasis, such as mycotoxin contamination, oxidative stress, and infection [18-20], suggesting a similar function for AKG via the transamination pathway. In this study, AKG supplementation increased the average feed intake but decreased the daily body weight gain rate. Similarly, oral therapy with AKG lowered the body weight in experimentally induced hypercholesterolemia in rats [21]. The reason might be that AKG reduces fat deposition [22] or improves lipolysis and fatty acid oxidation via enhancing Arg and NO synthesis [23]. However, a report has shown that 1% AKG supplementation in the basal diet had little effect on feed intake and weight gain in LPS- challenged piglets [9], while another study has found that 1% AKG increases weight gain, but decreases the feed conversion ratio in the juvenile hybrid sturgeon [24]. The effects of AKG supplementation on body weight and feed intake differ among those investigations. This may be related to the animal models (e.g. mice, rat, pig or juvenile hybrid sturgeon) or the dosage of AKG supplementation.

Gln or Arg has been suggested to play a beneficial role in immunology. Our previous study has shown that Gln improves host defense and decreases specific virulence factor expression in vaccine-immunized mice [34]. Meanwhile, dietary Arg supplementation improves the innate immune response in the mouse intestine [10]. AKG may play a similar role in the intestinal immune response. Previous reports have suggested that AKG is an immune enhancer via modulating T cell differentiation and T cell activation [35], managing neutrophil function and generating ROS [5]. AKG activates intestinal innate immunity by improving the expression of α-defensins in the ileum. A-defensins are antimicrobial peptides expressed by Paneth cells or goblet cells, and have important roles in mucosal defense [36]. Interestingly, AKG supplementation inhibits the expression of Crp1 and Crp5 in the ileum of antibiotic-treated mice, suggesting that intestinal microbiota may mediate the influence of AKG supplementation on the expression of α-defensins.

Female ICR (Institute of Cancer Research) mice (aged six weeks) were purchased from SLAC Laboratory Animal Central (Changsha, China). The mice were housed in sterile animal colonies separately (temperature, 25±5 oC; relative humidity, 55±5%; 12-h dark/12-h light) and had access to standard rodent feed according to our previous study [10] and drinking water ad libitum. The mice were given 3 days of accommodation before grouping. This study was performed under the guidelines of the Laboratory Animal Ethical Commission of the Chinese Academy of Science. All animal experiments were approved by the Animal Welfare Committee of the Institute of Subtropical Agriculture, Chinese Academy of Sciences (2014-8A).

Sixty mice were randomly separated into two groups (control and AKG, n = 30). Mice in the control group received normal drinking water for 2 weeks, while mice in the AKG group received AKG (Sigma-Aldrich Co. LLC, Shanghai, China)-supplemented water (10 g/L). All mice had free access to basal feed in this experiment. The dosage of AKG and the experimental period were selected according to our previous study [12]. Mice were euthanized to collect the luminal contents of the ileum and the feces. All samples were stored at -80 ˚C until further processing. The water intake, feed intake and body weight were recorded during the entire experiment.

Sixty mice were randomly assigned into two groups (antibiotics and antibiotics+AKG, n = 30). Mice in the antibiotics group received antibiotic-supplemented drinking water (1 g/L ampicillin; 450 mg/L streptomycin; 200 mg/L gentamicin) for 2 weeks according to our previous study [37], while mice in the AKG group received water supplemented with antibiotics and AKG (10 g/L AKG; 1 g/L ampicillin; 450 mg/L streptomycin; 200 mg/L gentamicin). All mice had access to basal feed in the experiment. All mice were euthanized for sample collection, including the ileal luminal contents and the feces. All the samples were stored at -80 ˚C until further processing. The water intake, feed intake and body weight were monitored during the entire experiment.

The feces and the luminal contents of the ileum were collected for DNA extraction using the Qiagen QIAamp DNA Stool Mini Kit according to the protocol. Equal amounts of DNA from six different mice were pooled to generate one common sample for each type of sample according to our previous study [38]. A commercial biology company (Shanghai Biotree Biotech Co., Ltd., Shanghai, China) performed Illumina MiSeq sequencing and general data analyses.

To whom correspondence should be addressed. E-mail: Gang Liu, [email protected]