*These authors should be considered co-first authors

Osteosarcoma, which is highly malignant and invasive, is frequently seen in teenagers. Pulmonary metastasis occurs in early stages in osteosarcoma patients and is associated with a poor prognosis [1]. Although surgery and chemotherapy have substantially improved the prognosis of osteosarcoma [2], high rates of postoperative multidrug resistance usually lead to recurrence and metastasis [3].

Angiogenesis plays an essential role in the growth, invasion, and metastasis of osteosarcoma [4]. It has been shown that drugs such as sorafenib can repair abnormal blood vessels and improve the transportation of oxygen and drugs to tumor cells, thus increasing the efficacy of chemotherapy [5]. Therefore, it could be an approach to treat osteosarcoma by developing drugs inhibiting angiogenesis. Critical factors in the process of angiogenesis may be potential targets for therapy in osteosarcoma patients.

WW domain-containing oxidoreductase (WWOX), which is encoded by the chromosomal fragile site spanning gene [6], is a tumor suppressor in several human cancers [7–9]. It is likely inactivated by translocations [10, 11], loss of heterozygosity [12], copy number aberrations [13], and promoter hypermethylation [14]. WWOX protein might interact with several molecules that are associated with tumor progression and angiogenesis, including RUNX2 [13, 15], bcl-2 [16, 17], P73 [18], c-Jun [19] , and Dvl-2 [20]. In a previous study, periosteal osteosarcoma relapse occurred along the diaphysis in 31% of adolescent WWOX knockout mice [21]. Additionally, WWOX immunoreactivity was reduced in 58% of osteosarcoma specimens, while WWOX expression was strong in all the normal bone specimens [22]. Furthermore, overexpression of WWOX inhibited the metastasis of human osteosarcoma and reduced tumor sizes in a nude mouse model [23]. These findings suggest that WWOX plays a role in angiogenesis and invasion in human osteosarcoma.

In this study, we investigated the role of WWOX in angiogenesis in human osteosarcoma and its effects on the expression of CD34, RUNX2, and VEGF to understand their potential interaction in the development of osteosarcoma. 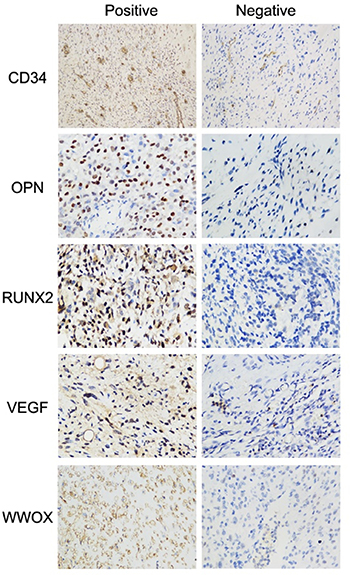 WWOX expression is predictive of disease-free survival in osteosarcoma patients 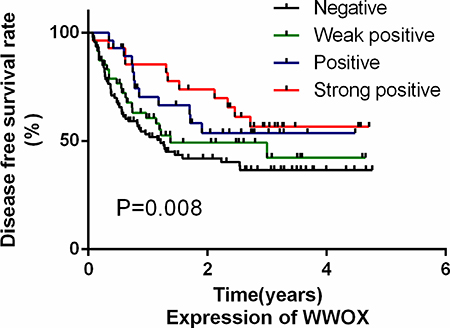 Figure 3: Overexpression of WWOX promoted apoptosis in osteosarcoma cells. U2OS, SAOS2, and MG-63 cells were transfected with WWOX overexpression plasmid, WWOX-siRNA, or control constructs followed by 48 h of incubation. The cells were collected and stained with FITC-labeled annexin V and propidium iodide, after which apoptosis rates were measured using flow cytometry. NC: negative control. In this group, the cells were transfected with blank vector plasmids. *P < 0.05. Bars depict the mean ± SD from three replicates in an independent experiment. The results shown are representative from three repeated experiments 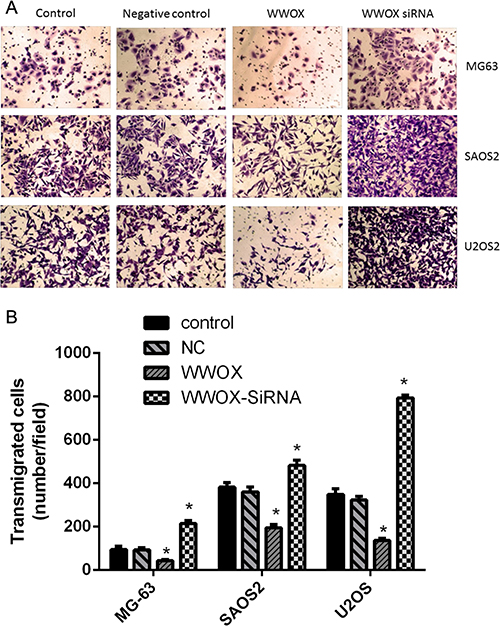 Figure 4: WWOX inhibited the invasion of osteosarcoma cells. Invasion assays were performed in osteosarcoma cells using Boyden chambers. NC: negative control. In this group, the cells were transfected with blank vector plasmid. Images were taken under 100× magnification. *P < 0.05. Bars depict the mean ± SD from three replicates in an independent experiment. The results shown are representative from three repeated experiments. 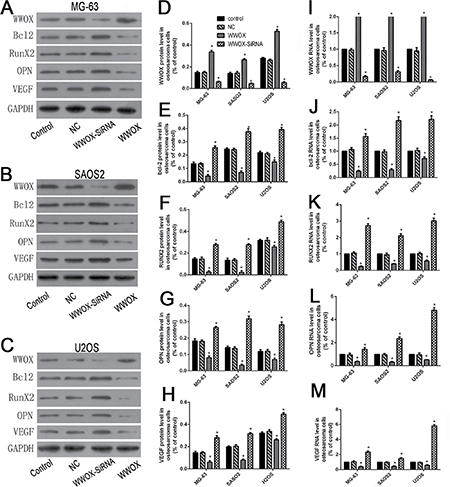 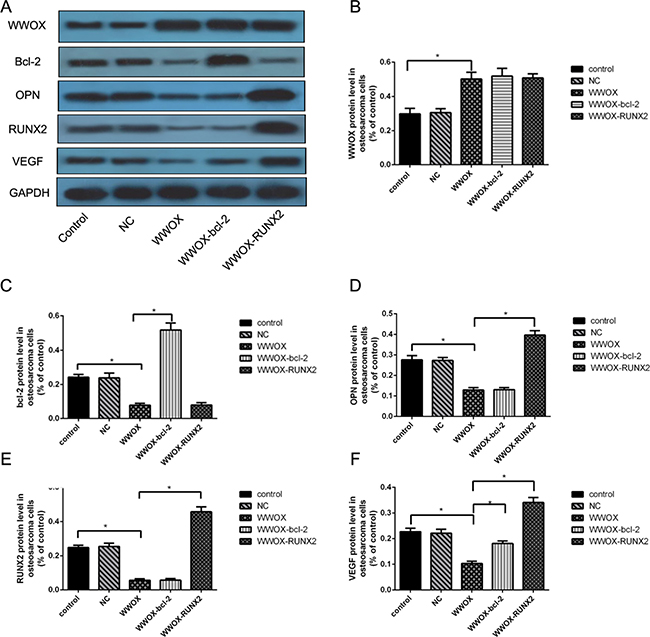 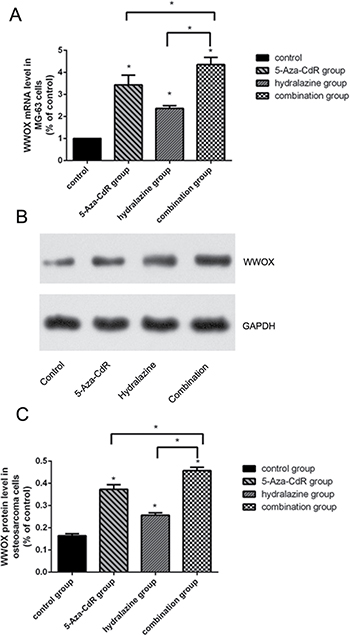 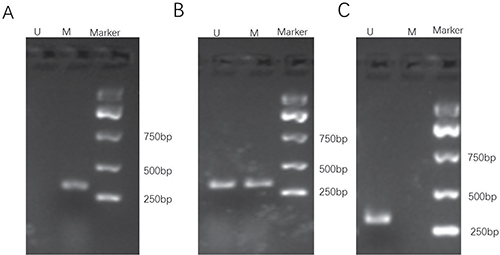 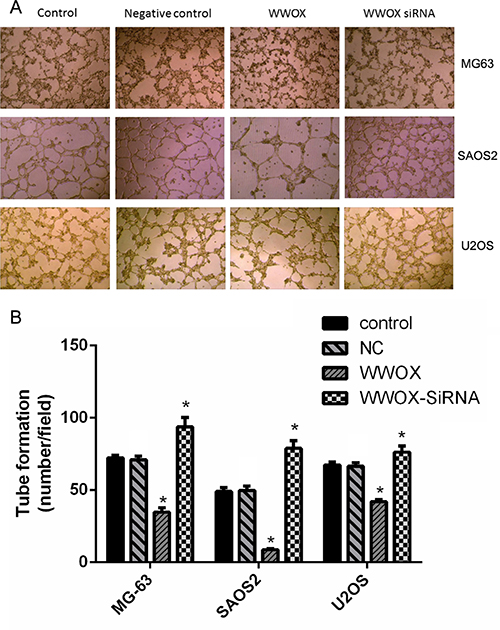 Figure 9: WWOX inhibits tube formation in HUVECs. Images were taken under 40× magnification. *P < 0.05. NC: negative control. In this group, the cells were transfected with blank vector plasmid. Bars depict the mean ± SD from three replicates in an independent experiment. The results shown are representative from three repeated experiments. 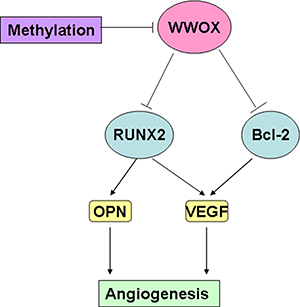 In this study, we also found that WWOX promoted apoptosis in osteosarcoma cells, which is consistent with the results of previous studies [8, 14, 16]. WWOX expression differs among cell lines with varying degrees of tumorigenicity and metastasis [26]. Additionally, the sensitivity of WWOX expression to a specific siRNA may differ among cell lines; U2OS and SAOS2 cells appeared to be much less sensitive to siRNA than MG-63 cells. This might partially explain why siRNA-mediated WWOX knockdown decreased apoptosis rates in MG-63 cells, but not in U2OS or SAOS2 cells. In contrast, overexpression of WWOX increased apoptosis rates in all three cell lines.

Angiogenesis plays a critical role in cancer progression by promoting tumor metastasis, which results in poor prognoses [27–29]. In this study, we showed for the first time that WWOX expression was negatively associated with MVD and confirmed that WWOX overexpression in osteosarcoma cells inhibited tube formation in co-cultured HUVEC cells. These data suggest that decreased WWOX expression might promote angiogenesis in osteosarcoma.

In conclusion, we found that the inhibition of WWOX expression, which was due at least in part to DNA methylation, inhibited apoptosis, promoted invasion, upregulated bcl-2, OPN, RUNX2, and VEGF expression, and increased MVD in osteosarcoma cells. These findings elucidate the underlying mechanisms by which decreased WWOX levels promote angiogenesis and invasion in osteosarcoma.

This study was approved by the Ethics Committee of Sun Yet-sen University and Zhengzhou University. Patients diagnosed with osteosarcoma (n = 201) at the First Affiliated Hospital of Sun Yet-sen University and Zhengzhou University between 2011 and 2015 based on pathological examination of paraffin-embedded tissue specimens were included in the study. Written informed consent was obtained from all patients. Clinical and histopathological patient characteristics are listed in Table 5. All patients had a clinical stage of T2N0M0, and none of the patients received radiotherapy prior to surgery. Disease-free survival was monitored during follow-ups, and the median follow-up time for all 201 patients was 29.5 months.

WWOX, VEGF, OPN, and RUNX2 expression were determined using immunohistochemical staining as previously described [13]. Antibodies against WWOX, VEGF, and RUNX2 were purchased from Abcam (Cambridge, UK) and used at dilutions of 1:500, 1:100, and 1:100, respectively. PBS was used as a negative control for all IHC. Immunostaining was examined under a light microscope by two pathologists blinded to all patient data. Ten fields (400×) that included >100 cells were randomly examined for each section. Staining intensity was scored based on staining color: a score of 0 indicated no staining, 1 indicated yellow staining, 2 indicated tan staining, and 3 indicated brown staining. The extent of staining was also scored based on the proportion of positive tumor cells: < 5% positive tumor cells was scored 0, 6–25% was scored 1, 26–50% was scored 2, 51–75% was scored 3, and > 75% was scored 4. IHC scores were calculated by multiplying the staining intensity and extent scores and were used to categorize protein expression as follows: an IHC score of 0 was considered negative (“–”), scores of 1–3 were considered weak positive (“ + “), scores of 4–7 were considered moderate positive (“++”), and scores of 8–12 were considered strong positive (“+++”).

Apoptosis was examined in human osteosarcoma cells collected 48 h after transfection using flow cytometry with the Annexin V-FITC/PI Apoptosis kit according to the manufacturer’s protocols and a FACS Calibur flow cytometer (Becton Dickinson, USA) with CellQuest software. More than 5×105 cells were examined for each sample, and the experiment was independently repeated three times.

The invasion capacity of human osteosarcoma cells was assessed using a Boyden chamber assay. Transwell chambers with a pore size of 8 μm were pre-coated with matrigel. A total of 1 ×105 cells in 100 μL of serum-free DMEM were seeded into the upper chambers, and 600 μL of DMEM with 10 % FBS was added to the lower chamber. After incubation at 37°C for 24 h, the invaded cells were fixed in 4% paraformaldehyde (Beyotime Institute of Biotechnology, China). After 30 min of fixation, the cells were stained with crystal violet for 10 min. Numbers of invaded cells were counted in five randomly selected fields for each well. All experiments were independently performed three times.

Total proteins were extracted from cells using RIPA buffer with PMSF (Thermo, USA), and the protein concentration was determined using the BCA method (Beyotime, China). Equal amounts of protein were resolved by sodium dodecyl-polyacrylamide gel electrophoresis and then transferred onto polyvinylidene fluoride (PVDF) membranes (Millipore, USA). The membranes were blocked with 5% non-fat milk at room temperature for 1 h and then incubated with primary antibodies (WWOX, RUNX2, bcl-2, OPN, or VEGF) overnight at 4°C. After three washes, the membranes were incubated with horseradish peroxidase-conjugated secondary antibody (Beyotime) for 1 h at 37°C. The bands containing the target proteins were then detected using the enhanced chemiluminescence (ECL) kit (Millipore, USA).

The tube formation assay was performed as previously described [45–47] with slight modifications. Briefly, U2OS, SAOS2, or MG-63 osteosarcoma cells (starting density 2 × 104 cell/ml) were been transfected with WWOX overexpression, WWOX siRNA, control plasmids (NC, negative control) or vehicle control for 4–6 h and incubated in serum-free RPMI-1640 (Hyclone, Cat.No.SH30809.01B) medium supplemented with Streptomycin (Hyclone, Cat.No. SH30010) for 72 h. These serum-free conditioned medium was collected and stored at –80°C, and incubated at 37°C before use. 48-well plates were coated with 200 μL of matrigel (BD Biosciences, USA) per well via incubation at 37°C for 2 h. HUVECs were collected from culture, washed with PBS buffer (Hyclone, Cat.No.SH30256.01B), resuspended in conditioned medium in a density 1 × 105 cells/ml. Each HUVECs sample was added onto the matrigel at a density of 2 × 104 cells/well and incubated for 4–6 h. Three fields were randomly selected and examined for tubes using an inverted optical microscope. The number of tubes in each field was counted and compared among treatment groups.

Authors do not have any conflicts of interest.