Nasopharyngeal cancer (NPC) is a rare type of head and neck squamous cell carcinoma (HNSCC). NPC could be caused by a combination of factors, including Epstein-Barr virus infection, environmental influences, and heredity [1-3]. NPC is endemic in Southeast Asia and southern China. In 2008, over 84,400 cases of NPC were diagnosed, and 80% of the cases occurred in Asia [4]. Even with the development of modern radiation therapy, distant metastasis will develop in 30-40% of patients within 4 years [5]. Improved understanding of NPC progression and the development of novel therapies is still urgently needed.

TBX2 is a member of the T box transcription factor family proteins, which are characterized by a highly conserved T box DNA binding domain [6]. TBX2 is fundamental to the morphogenesis of various tissues and organs, such as limbs [7, 8], heart [9], bone [10, 11] and mammary glands [12]. Existing evidences have linked TBX2 to tumorigenesis. TBX2 expression is up-regulated in a wide range of cancers, including melanoma [13], pancreatic cancer [14], bladder cancer, breast cancer [15-17], colorectal cancer [18] and lung cancer [19].

TBX2 functions as a repressor of transcription, which inhibits promoter activity of a number of cancer-suppressing genes. For example, it can facilitate the bypass of senescence by repressing transcription of Cdkn2a (p19ARF) and Cdkn1a (p21WAF1) [17]. TBX2 could also promote anchorage-independence growth and increase resistance to apoptotic stimuli in p53-negative SW13 adrenocortical carcinoma cells [20]. Furthermore, TBX2 is shown to directly repress E-Cadherin transcription, and to increase motility and invasiveness of malignant breast cancer cells [21]. Meanwhile, TBX2 directly targets checkpoint proteins p21 and p27 to promote cell cycle progression [21, 22]. Despite the importance of TBX2 in tumorigenesis of various cancers, the expression and biological functions of TBX2 in NPC are still largely unknown. In the current study, we report that TBX2 expression is up-regulated in clinical NPC tissue samples. Knockdown of TBX2 in the NPC cells inhibits cancer cell proliferation and invasion.

To investigate the expression of TBX2 in NPC, TBX2 mRNA expression was assessed in RNA samples that were isolated from 35 pairs of NPC tumor tissues and paired adjacent normal tissues. Quantitative real-time PCR assay (qRT-PCR) results in Figure 1A showed that the average TBX2 mRNA value in NPC tissues was significantly (P<0.0001) higher than in normal samples. TBX2 protein expression was also higher in NPC tissues, which was determined by Western blot assay (Figure 1B) and immunohistochemistry (IHC) staining assay (Figure 1C). For the Western blot assay, blot images analyzing four representative paired-tissues were presented (Figure 1B, upper panel). All the blot data of 35 paired-tissues were integrated for statistics analysis (Figure 1B, lower panel). Twenty of the 35 paired-tissues showed fine IHC staining (Figure 1C). Sixteen of them (80%) demonstrated high TBX2 expression, and representative images were shown (Figure 1C). These data suggest that TBX2 protein and mRNA expression is significantly increased in NPC tissues. 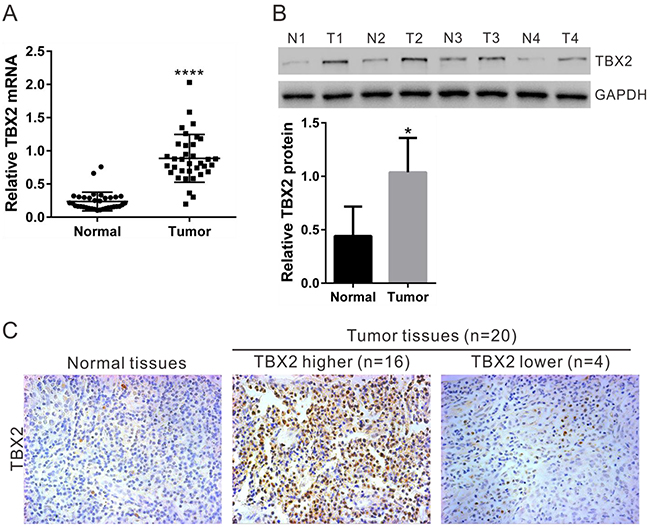 We also tested expression of TBX2 in a panel of NPC cell lines, including C666-1, CNE-1, HONE-1, CNE-2 and SUNE-1. As shown in Figure 2A, among all the tested cell lines, CNE-1 and HONE-1 showed highest expression of TBX2 (both protein and mRNA). In order to study the function of TBX2 in NPC cell behaviors, we transfected TBX2 siRNAs (siRNA1, siRNA2 and siRNA3, with non-overlapping sequence) or control siRNA (siNC) into CNE-1 and HONE-1 NPC cells. To determine the effect of siRNA on TBX2 expression, qRT-PCR and Western blotting were performed. Relative to “Mock” or siNC-transfected cells, transfection of the TBX2 siRNAs in CNE-1 (Figure 2B) and HONE-1 (Figure 2C) cells significantly decreased TBX2 mRNA and protein expression. Among all the tested siRNAs, TBX2 siRNA1 had the highest knockdown efficiency, and was thus chosen for further experiments. 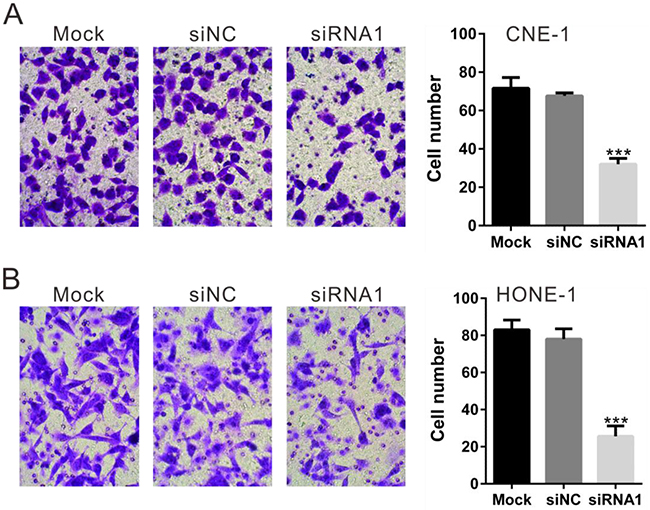 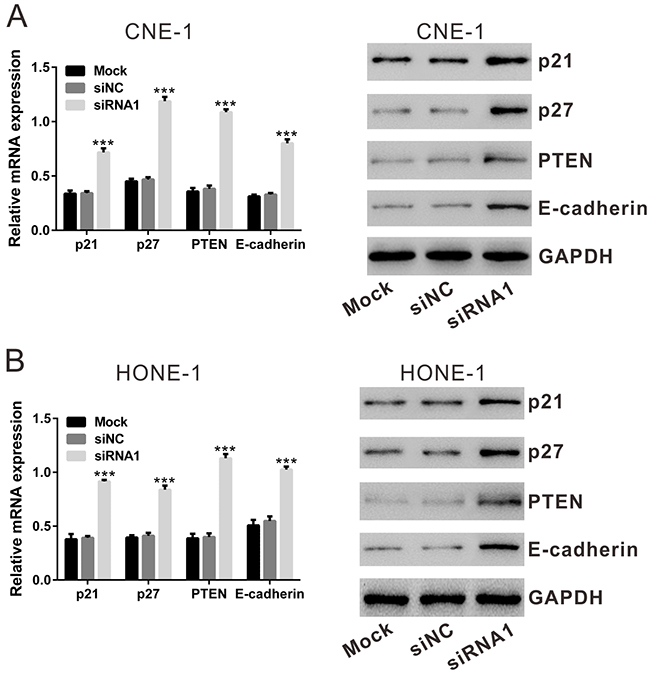 Up-regulation of TBX2 has been reported in a wide range types of cancer [13-19]. In the present study, we reported that TBX2 mRNA and protein expression was significantly higher in NPC tissues samples than that in the adjacent normal tissues. Previous studies have implied a possible function of TBX2 up-regulation in promoting cell proliferation and invasion. Here, we also observed similar results in NPC cells, indicating that TBX2 might also promote proliferation and invasion of NPC cells.

Uncontrolled cellular proliferation is one of the main features of cancer. Here, siRNA knockdown of TBX2 in two NPC cell lines significantly decreased cancer cell proliferation, which was consistent with previous studies in heart cells [27], in melanoma cells [13] and rhabdomyosarcoma cells [28]. The checkpoint protein p21 is a well-known cyclin-Cdk inhibitor, which is vital for the G1-S progression [29]. Over-expression of p21 shall cause G1-S arrest [29]. Similarly, p27 is a potent inhibitor of cyclin D1-Cdk4 and cyclin A-Cdk2 protein kinase activity, which is related to p21 [22]. Exogenous expression of p27 is shown to induce G1-S arrest as well [22]. Both p21 [25, 26], p27 [26] are the TBX2-targted proteins. In the current study, we showed that p21 and p27 were increased in TBX2-silenced NPC cells, that could explain the subsequent G1 arrest and proliferation inhibition.

PI3K/AKT pathway is involved in the regulation of cell cycle progression and cellular growth [30]. Recent work has shown that TBX2 is a central component of the PTEN/PI3K/AKT signaling pathway in rhabdomyosarcoma cells by repressing PTEN [24]. Consistent with these findings, we showed that PTEN expression was increased in TBX2-silenced cells. Therefore, TBX2 may exert the cell proliferation-promoting functions via regulating PTEN/PI3K/AKT signaling pathway as well.

Cell invasion/migration is essential to the metastasis of cancer. Increased expression of E-Cadherin was shown to inhibit cell invasion [31]. Here, we discovered that TBX2 knockdown significantly increased E-Cadherin expression, and repressed in vitro invasion/migration of NPC cells. Our results here are consistent with the findings in malignant breast cancer cells [21]. These results along with the mentioned previous studies suggest that TBX2 could promote cell proliferation and invasion of different cancer cells. Recent studies have also proposed a pivotal function of TBX2 in cell senescence [17]. It has been shown that TBX2 can inhibit Cdkn2a (p19ARF) promoter and suppress E2F1, Myc or HRAS-mediated induction of Cdkn2a (p19ARF) [17]. Therefore, it would be interesting to test potential effect of TBX2 in NPC cell senescence.

TBX2 protein expression in tissue sections was detected by immunohistochemistry (IHC). Briefly, 5-μm sections were de-paraffinized in xylene (concentration over 99.0%), rehydrated through a graded ethanol series, and antigen-retrieved by heat treatment in 10mM citrate buffer for 5 min. To inhibit endogenous peroxidase, sections were treated with 0.3% hydrogen peroxide for 30 min. After incubation with 5% BSA for 30 min to block non-specific binding, sections were incubated with anti-TBX2 antibody (ab33298, Abcam, 1:50 dilution) overnight at 4 °C. The sections were then incubated with horseradish peroxidase (HRP)-conjugated secondary antibody (A0208, Anti-Rabbit IgG, Beyotime, 1:1000 dilution) at room temperature for 1h and developed with the DAB kit (Vector Laboratories, Burlingame, CA) followed by counterstained with Mayer’s hematoxylin. Section images were obtained using a microscope (Nikon, Japan).

CNE-1 cells and HONE-1 cells were plated onto 96-well plates at a density of 2 × 103 cells per well and transfected with siRNA1 or siNC. After incubation for 0, 24, 48 and 72 h, 10 μL cell counting assay kit-8 (CCK-8) solution (Dojindo Laboratories, Japan) was added to all wells and incubated at 37 °C for another 1 h. The absorbance at 450 nm was measured using a microplate reader (Labsystems, Helsinki, Finland).

Cells were collected at 48h after siRNA transfection, washed with PBS and fixed in ice-cold ethanol at −20 °C overnight. The cells were then washed with PBS, and stained with staining solution containing 20 μg/mL propidium iodide (PI, Sigma, St. Louis, MO) and100 μg/mL RNase (Sigma) for 20 min. DNA content was analyzed with a flow cytometer (BD Biosciences, Franklin Lakes, NJ).

Invasion assays were performed using chamber with 8 μm pore filters (Corning, New York, NY) pre-coated with 1 mg/mL Matrigel (BD Biosciences, Shanghai, China). Briefly, CNE-1 cells and HONE-1 cells were transfected with siRNA1 or siNC. At 24h post transfection, the cells were incubated in serum-free medium overnight. The cells were collected and exact 5 × 104 cells in serum-free medium were plated to the upper chamber, while medium containing 10% FBS was added to the lower chamber. After 24h of incubation, cells on the lower surface of the membrane were fixed with 4% paraformaldehyde, stained with 0.5% crystal violet and then counted in five random fields. To block cell proliferation, mitomycin C (5 μg/mL, Sigma, Shanghai, China) was added.

Individual culture dishes or wells were analyzed separately (no pooling of samples was used). In each experiment a minimum of three wells/dishes of each treatment was used. Each experiment was repeated a minimum of three times, in each experiment, the mean value of the repetitions was calculated and this value was used in the statistical analysis. The data was presented as mean ± standard deviation (SD). One way ANOVA analysis was used to analyze the significance of in vitro experiments. P value less than 0.05 was considered statistically significant.

In conclusion, our results demonstrates that the expression of TBX2 is markedly overexpressed in NPC tissues. Knockdown of TBX2 significantly inhibits the NPC cell proliferation and invasion, and induces cell cycle arrest.

All the listed authors in the study carried out the experiments, participated in the design of the study and performed the statistical analysis, conceived of the study, and helped to draft the manuscript.

This work is partly supported by the Youth Foundation of “Revitalize and Defend the Key Talent’s Subsidy Project” from the Science and Education Department of Health and Family Planning of Suzhou (KJXW2015042), by the Jiangsu University Special Program of Medical Science(JLY20160114), by the grants from the National Natural Science Foundation of China (Nos. 81302195, 31371139, 81571282, 81502162), and grants from Natural Science Foundation of Jiangsu Province (BK20130301), and the National Key Research and Development Program of China (2016YFC1302200).

20. Ismail A, Bateman A. Expression of TBX2 promotes anchorage-independent growth and survival in the p53-negative SW13 adrenocortical carcinoma. Cancer Lett. 2009; 278:230-240.