Objectives: The role of programmed cell death ligand 1 (PD-L1) in non-small cell lung cancer (NSCLC), especially according to histologic type, remains controversial. The purpose of this study was to assess PD-L1 expression and its association with overall survival (OS) and clinicopathologic characteristics in NSCLC.

Materials and methods: Formalin-fixed paraffin-embedded specimens were obtained from 108 patients with surgically resected primary NSCLC. PD-L1 expression was assessed via immunohistochemistry using a histochemistry score system. The relationship between OS or clinicopathologic characteristics and PD-L1 expression was evaluated via the Kaplan-Meier method and Cox proportional hazards model, respectively.

Conclusions: This study demonstrated that PD-L1 expression is an independent prognostic factor for poor survival in NSCLC patients, especially those with non-squamous NSCLC.

Lung cancer is the leading cause of cancer death worldwide [1]. Although in recent years multidisciplinary therapies have been widely used in patients with non-small cell lung cancer (NSCLC), the overall prognosis of NSCLC remains poor. Previous studies expressed full confidence in the promising prospects of monoclonal antibodies, which can effectively block inhibitory immune checkpoints, among the various immunotherapeutic strategies in lung cancer [2–4]. Preclinical and clinical data showed that monoclonal antibodies can significantly enhance the antitumor immunity of patients [3].

Cytotoxic T-lymphocyte–associated antigen 4 (CTLA-4), a second counter receptor for the B7 family of co-stimulatory molecules, was the first clinically validated checkpoint pathway target. CTLA-4 inhibits T cell activation in initial stages and breaks tolerance of human cancer antigens, many of which are normal self-antigens, yet produces frequent immune-related adverse events [5–7]. More recently, programmed death 1/programmed cell death ligand-1 (PD-1/PD-L1) has become a popular blockade of co-inhibitory immune pathways. PD-1 (also known as CD279), a member of the CD28 family, is expressed on many lymphocytes and negatively regulates their proliferation and activation, such as activated T cells, regulatory T cells, and B-cells [8, 9]. PD-1 has two binding ligands, PD-L1 (B7-H1, CD274) and programmed cell death ligand-2 (PD-L2, B7-DC, CD273), both of which belong to the B7 family [10–12]. PD-L2 is mainly expressed on activated dendritic cells and macrophages. PD-L1 is not only broadly expressed on non-immune cells, such as T cells, B cells, macrophages, and dendritic cells, but it is also upregulated after their activation. Furthermore, researchers have recently discovered the expression of PD-L1 in various tumor cells, including breast cancer, gastric cancer, NSCLC, pancreatic cancer, bladder cancer, cervical cancer, renal cell carcinoma, and melanoma [13–20]. The inhibition of the PD-1/PD-L1 pathway enhances antitumor immunity to prevent tumor cells from escaping from host immune responses, thus providing a promising strategy for specific tumor immunotherapy [21].

In this study, we used immunohistochemistry (IHC) to assess the prognostic role of PD-L1 in the OS of patients with surgically resected NSCLC and the association between PD-L1 expression and clinicopathologic characteristics, including histologic type, sex, age, and pathologic tumor-node-metastasis (TNM) stage.

A total of 108 patients with NSCLC were included in the study. The patients’ characteristics are shown in Table 1. All patients underwent surgical resection when first diagnosed with primary NSCLC. The mean follow-up after surgical resection was 48.4 months. The median age of the patients at diagnosis was 55 years (range, 15-75 years), and 59% were male. In our enrolled NSCLC patients, TNM stages I, II, III, and IV at initial diagnosis were identified in 39, 26, 36, and 6 patients, respectively. The tumor grade of one tumor sample was not reported. The tumor histology was squamous cell carcinoma in 34 specimens, adenocarcinoma in 57 specimens, adenosquamous carcinoma in 11 specimens, and other histologic types in 6 specimens.

Of the 108 cases of NSCLC, 44 had PD-L1 expression in the tumor cell membrane and cytoplasm. Squamous cell carcinomas and adenocarcinomas with PD-L1 staining are shown in Figures 1 and 2. 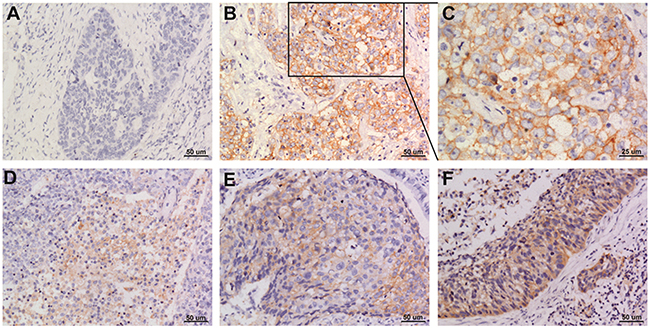 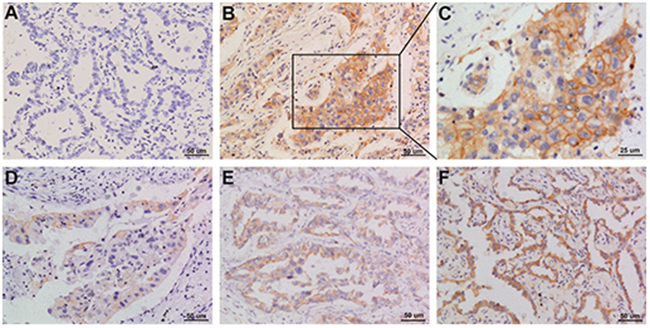 Table 2: Patients characteristics and their association with PD-L1 expression

In Figure 3, the Kaplan–Meier curves revealed that patients whose tumors did not have PD-L1 expression had significantly longer OS than those with PD-L1 expression (median OS: 96 months vs. 33 months, p < 0.001). 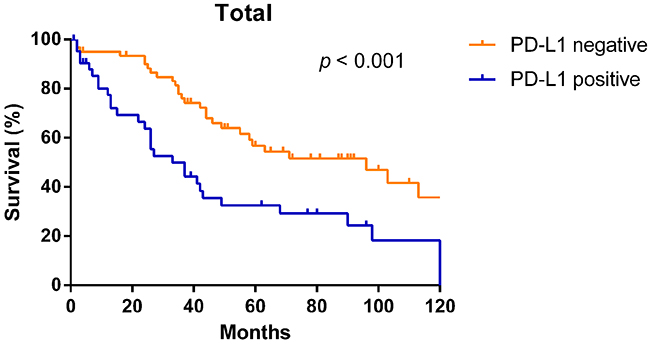 Table 3: The effect of clinicopathological characteristics and PD-L1 expression on overall survival 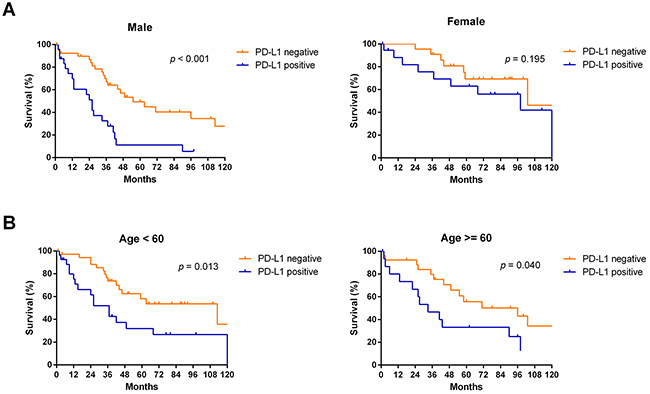 Figure 4: Survival analyses of NSCLC patients with and without PD-L1 expression in subgroups, including, including sex (A) and age (B). 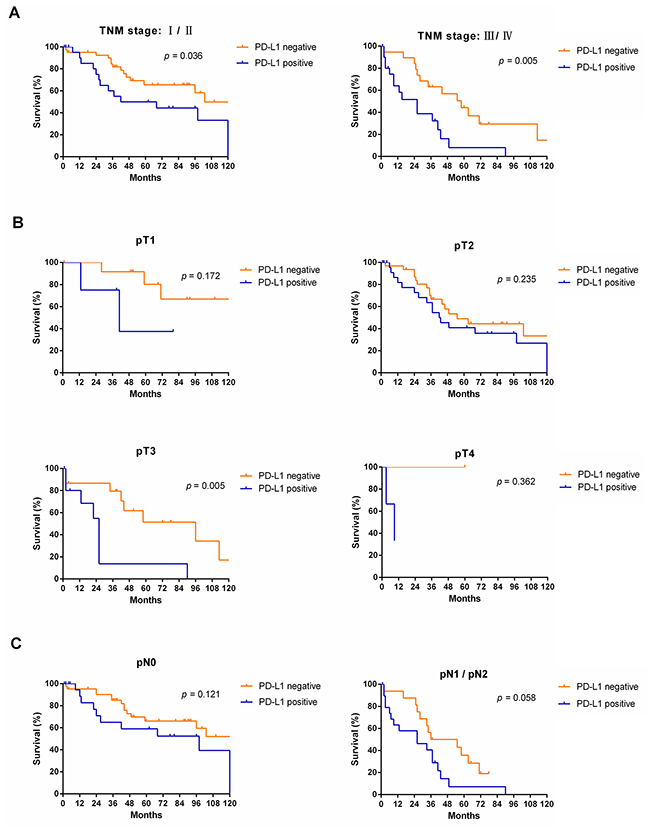 Figure 5: Survival analyses of NSCLC patients with and without PD-L1 expression in subgroups, including TNM stage (A), tumor stage (B) and node metastasis (C). 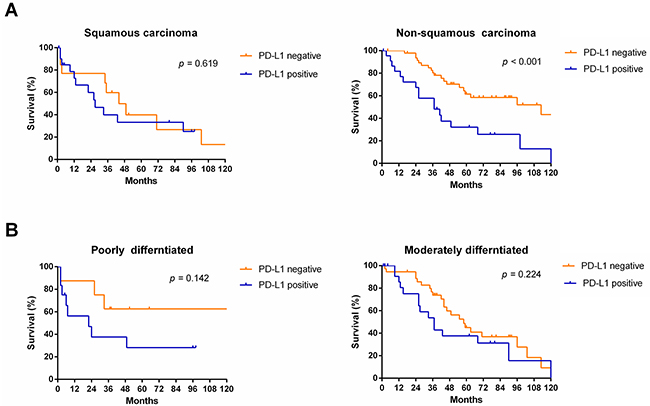 Figure 6: Survival analyses of NSCLC patients with and without PD-L1 expression in subgroups, including histologic type (A) and differentiated degree (B).

This study demonstrated that PD-L1 expression is an independent prognostic factor for poor OS in NSCLC patients, especially those with non-squamous NSCLC. The analysis also confirmed that high PD-L1 expression is significantly associated with histologic type.

We further demonstrated that patients without PD-L1 expression had significantly longer OS than those with PD-L1 expression. Previous studies similarly reported that high PD-L1 expression was regarded as a poor prognostic biomarker in patients with lung cancer, renal cell carcinoma, breast cancer, malignant melanoma, hepatocellular carcinoma, gastric carcinoma, pancreatic cancer, and ovarian cancer [13, 27–34]. Another study reported that no association was found between PD-L1 overexpression and 3-year overall OS of lung cancer [35]. Using different clone of PD-L1 antibodies as well as different tricks of immunohistochemical technology in the included studies may contribute to the conflicting results. However, further studies are needed to confirm the impact of antibodies on the results of studies.

In terms of histologic type, similar results were reported by Velcheti et al., who found that PD-L1 expression was associated with squamous cell carcinoma [23]. Another study showed that PD-L1 expression was not only associated with adenocarcinoma but also with the degree of differentiation and node metastasis [27]. However, a meta-analysis revealed that none of clinicopathologic characteristics, including sex, smoking status, tumor stage, node metastasis, TNM stage, differentiated degree and histological type was associated with PD-L1 expression in NSCLC [26]. We found no significant difference between smoking status and PD-L1 expression, but considering smoking data in our study was incomplete, so we did not show the smoking data here. A larger sample size with more patients may provide more convincing data.

MEDI4736 is a human IgG1 anti-PD-L1 monoclonal antibody being tested in an ongoing phase III trial in NSCLC. Atezolizumab (MPDL3280A), an engineered IgG anti-PD-L1 antibody, has also shown activity in ongoing phase III trial in NSCLC. Avelumab (MSB0010718C), a fully human anti-PD-L1 IgG1 antibody, currently being investigated in a phase III head-to-head trial of avelumab versus docetaxel in patients with NSCLC [41]. We anticipate promising results from these studies of anti-PD-L1 monoclonal antibodies.

Although NSCLC patients have favorable clinical benefits from blocking the PD-1/PD-L1 pathway, certain issues must still be considered. The most important is that different score systems and different tricks of immunohistochemical technology maybe lead to different results. Furthermore, anti-PD-L1 monoclonal antibodies used for testing PD-L1 expression may lack sensitivity and yield false-negative results, and there is no uniform standard at present. In addition, the expression of PD-L1 is very dynamic, and its uneven distribution in tumor tissue might lead to false-negative results [42–45]. Compared with other detection methods, we evaluated PD-L1 expression in tumor tissues with a standard and credible IHC protocol and reliable histochemistry score (H-score) system, which involved the percentage of positive tumor cells and the intensity of staining in tissue sections.

A standardized method of detecting PD-L1expression maybe provide support for patients who are initially diagnosed with primary NSCLC by allowing for early anti-PD-1 or anti-PD-L1 monoclonal antibody immunotherapy, thus improving treatment efficacy and managing cost. Although the current method of detecting PD-L1 is not as precise as EGFR test, the prospects of PD-L1 as a prognostic factor for poor survival are encouraging.

Efforts were made to conduct sound and rigorous research, but our study had some limitations. First, we obtained several interesting results using samples from 108 patients, but the results will need to be validated with a larger sample size. Second, we retrospectively collected all the information, rather than performing a prospective study. Third, PD-L1 expression was assessed with only IHC, but other detection methods are needed to verify the results.

In conclusion, the current study demonstrated that PD-L1 expression is an independent prognostic factor for poor survival in NSCLC patients, especially those with non-squamous NSCLC. We expect to develop an optimized method of detecting PD-L1 expression in tumor cells to validate PD-L1 as an accurate predictor for anti-PD-1/PD-L1 monoclonal antibody treatment. We anticipate that the anti-tumor efficacy of anti-PD-1/PD-L1 monoclonal antibodies will be strengthened and survival in NSCLC patients will be improved.

This study included 108 patients who underwent tumor resection or palliative surgery for a primary tumor that was histologically confirmed as primary NSCLC between 2002 and 2012 at the Fifth Affiliated Hospital of Sun Yat-sen University. From their medical records, we retrieved and recorded patients’ clinical data, such as sex, age, histologic type, and TNM stage (using the 7th UICC TNM Staging System of lung cancer). All of the patients were carefully monitored after initial treatment. Expert pathologists at the hospital re-reviewed hematoxylin-eosin–stained slides from all cases, and corresponding formalin-ﬁxed, parafﬁn-embedded specimens were retrieved, rendering 2-μm-thick pathological sections mounted on glass slides.

PD-L1 IHC was performed using the commercial rabbit monoclonal antibody E1L3N (#13684, Cell Signaling Technology, Danvers, USA). Tissue sections were deparaffinized in xylene and a subsequent ethanol series was used to rehydrate them. The sections were unmasked with antigen retrieval buffer (MVS-0099, Maxim EDTA buffer, pH 8.0) in an autoclave for 10 min at 120°C. To block endogenous peroxidase activity, the sections were treated with 0.3% hydrogen peroxide for 30 min. and subsequently washed with phosphate-buffered saline. After being washed with phosphate-buffered saline, the sections were incubated with the PD-L1 antibody at a 1:200 dilution overnight at 4°C. The sections were then washed three times with wash buffer for 5 min each time. The secondary antibody of the EliVision Plus kit detection system and the enhanced polymer 3, 3′diaminobenzidine detection kit (Maxim Biotech, Fuzhou, China) were used according to the manufacturer’s instructions. After staining, the sections were washed in distilled water and dehydrated in graded alcohol. Finally, the sections were mounted with coverslips.

Each clinicopathologic characteristic was evaluated using Pearson’s chi-squared test or Fisher’s exact test (categorical variables). OS was measured from the date of the initial operation until the date of death or last follow-up. The Kaplan-Meier method and log-rank test were applied to assess OS. Univariate Cox regression proportional hazards analysis was used to assess clinicopathologic characteristics significantly related to OS with HRs and 95% CIs. Multivariate Cox proportional hazards analysis was performed to determine whether PD-L1 expression is an independent prognostic factor. A two-sided p value of < 0.05 was considered statistically significant. Several variables were unknown; thus, their implications were not assessed. All statistical analyses were performed using SPSS 20 software (IBM, Armonk, NY).