Mouse models of hepatocarcinogenesis: What can we learn for the prevention of human hepatocellular carcinoma?

There is growing evidence that chronic inflammatory processes are involved in triggering the sequence from chronic liver injury to liver fibrosis, ultimately leading to liver cancer. In the last years this process has been recapitulated in a growing number of different mouse models. However, it has remained unclear whether and how these mouse models reflect the clinical reality of human hepatocellular carcinoma (HCC). Research with animal models but also human liver specimens has indicated that the NF-κB signaling pathway might withhold a crucial function in the mediation of chronic hepatic inflammation and the transition to HCC in humans. However, previous studies led to divergent and partly conflicting results with regards to the functional role of NF-κB in hepatocarcinogenesis. Here, we discuss a new genetic mouse model for HCC, the liver-specific TAK1 knockout mouse, which lacks the NF-κB activating kinase TAK1 specifically in parenchymal liver cells. Molecular findings in this mouse model and their possible significance for chemopreventive strategies against HCC are compared to other murine HCC models.

Hepatocellular carcinoma (HCC) represents the most common primary carcinoma of the liver [1]. In most instances, HCC arises in a setting of chronic inflammation and subsequent liver fibrosis [2]. Besides chronic alcohol consumption or drug abuse, autoimmunity or the uptake of liver toxins (e.g. Aflatoxin B1), infections with Hepatitis B- (HBV) and Hepatitis C-viruses (HCV) represent the main risk-factors for hepatocarcinogenesis [3, 4]. The world-wide spread of HBV and HCV not only in developing but also in industrialized countries has led to approximately 500 million people persistently infected with HBV or HCV. This resulted in a strong rise in HCC-incidence. Consequently, HCC is the 5th most common cause for cancer related death world-wide; in some African or Asian countries HCC is even the first common cause for cancer related morbidity [3, 4]. In addition to its enormous clinical relevance, its unique pathophysiological features have made liver cancer research a field for studying basic molecular and cellular events driving chronic inflammation induced carcinogenesis, a process whose molecular underpinnings have largely remained elusive. Based on the wide range of these features, including immunology, tumor biology, genetics, metabolomics, cell biology etc., basic scientists from various research fields have focused their interest on the examination of animal HCC models. This will hopefully accelerate the discovery of new molecular mechanisms involved in hepatocarcinogenesis, subsequently leading to novel - urgently needed - therapeutic strategies against HCC.

Only recently, small inhibitor molecules have entered clinical practice to treat patients suffering from HCC. As such, Sorafenib (Nexavar®) is one of the new therapeutic agents that inhibit both pro-angiogenic (VEGFR-1, -2, -3; PDGFR-β) and tumorigenic (RET, Flt-3, c-Kit) receptor tyrosine kinases. Its efficacy in the context of HCC treatment was demonstrated in two large phase III clinical trials (SHARP and Asia-Pacific trial), which were conducted in both Western and Asian countries [5, 6]. Besides sorafenib, further therapeutic agents like regorafenib (BAY 73-4506) are currently investigated for their potential as anti-liver cancer therapeutics.

However, these new therapeutics “only” prolong survival and are palliative, while substances that could be used in an adjuvant setting are still lacking. In addition, it has to be clearly stated that HCC represent a diverse spectrum of cancers that will likely need - depending on the tumor type and tumor stage - different therapeutic strategies. In summary, systemic therapeutic options for HCC treatment are currently limited, underlining the need for new molecular targets. As outlined above, it has been well established that chronic inflammation and fibrosis precedes hepatocarcinogenesis. The eradication of the most common cause of chronic hepatic inflammation in humans (infection with HBV and HCV) is currently unattainable. Therefore, identification of central inflammatory signaling pathways that drive the transition from chronic liver injury to dysplasia and HCC might indeed open new possibilities for HCC-chemoprevention in a setting of chronic hepatitis.

In order to gain a better functional insight into the molecular mechanisms of hepatocarcinogenesis, multiple studies were performed using human HCC tissue. In the last years, a collection of genetic and epigenetic alterations, chromosomal aberrations, gene mutations and altered molecular pathways was described [7]. As such, chromosomal alterations could be attributed to certain genes potentially involved in hepatocarcinogenesis, such as c-Myc (8q), Cyclin A2 (4q), Cyclin D1 (11q), Rb1 (13q), AXIN1 (16p), p53 (17p), IGFR-II/M6PR (6q), p16 (9p), E-Cadherin (16q), SOCS (16p), and PTEN (10q) [7, 8]. Further, chromosomal alterations could be described in HCC, of which amplifications of 1q (58%-78%), 6p, 8q, 17q, and 20q, and deletions in 4q, 8p, 13q, 16q, and 17p represented the most frequent ones [9, 10]. However, in many cases it was difficult to assess whether these alterations represented a correlative epiphenomenon or if they were causally linked to HCC pathogenesis. In the light of the apsects mentioned above animal-models for HCC offer a unique possibility to study mechanistic and cellular aspects of tumor biology, including genetics of tumor initiation and promotion, tumor progression and spreading (metastasis) in vivo. Moreover, animal models also represent a valuable tool to pre-screen various therapeutic compounds for their efficacy to inhibit particular signaling pathways and prevent or decelerate HCC development.

The fact that inflammatory stimuli promote HCC development has been recapitulated in various rodent models and indeed during the last decades different models of chronic or acute liver damage induced carcinogenesis (e.g. chemically or genetically) have been established. One of the best studied chemically induced HCC-models is the diethylnitrosamine (DEN) induced liver carcinogenesis, which has been established in rats and mice [11]. In mice, a single dose of DEN at the age of 2 weeks causes DNA-damage, subsequent acute hepatitis, finally leading to HCC at approximately 8-10 months of age. The DEN rodent model withholds several advantages: (1) it can easily be administered to mice from different genetic backgrounds and of different genotype, (2) it has a high HCC incidence and (3) is highly reproducible [12]. Moreover, liver tumors from these mice withhold important features of a malignant cancer, since they metastasize in the lung. However, the primary event in DEN-induced carcinogenesis is DNA-damage leading to genetic mutations in an otherwise healthy liver. This indicates that - although happening in the context of acute liver damage - the sequence of primary DNA-damage and secondary acute inflammation does not quite reproduce the clinical reality of most patients, which develop HCC on the basis of chronic hepatitis in the absence of mutagens. Still, the DEN-rodent model has revealed crucial molecular and cellular pathways involved in the development of liver cancer and is a valuable tool to investigate particular molecules for their potential in inhibiting or promoting liver cancer formation [12-14].

In contrast to the DEN-rodent model, the Mdr2-knockout mouse represents a prototype of a genetically modified mouse model used to identify the pathways responsible for chronic inflammation-induced liver cancer. Mdr2-knockout mice lack a biliary transporter protein denoted as multi-drug resistance gene 2 (mdr2) leading to cholestatic hepatitis and liver cancer [15]. Tumor development in the Mdr2-knockout mice progresses through distinct phases: inflammation, dysplasia, dysplastic nodules, carcinoma and metastasis, thus mimicking to some degree the formation of HCC in humans [16]. A similar sequence of inflammation, mild fibrosis, dysplasia and HCC formation is observed in transgenic mice that overexpress the inflammatory cytokines lymphotoxin a and b (LTab) in the liver (AlbLTab) [17]. It was demonstrated that lymphotoxin LTa, b and their receptor (LTbR) are upregulated in livers of humans with HBV- or HCV-induced hepatitis and HCC. Subsequently, liver-specific LTab expression in mice induced liver inflammation and HCC [17]. In this context it is important to note that blockage of LTbR signaling strongly reduced the incidence of chronic hepatitis as well as abolished liver cancer [17].

The differences between the above mentioned rodent HCC-models are reflected by distinct, activated inflammatory signaling pathways leading to inflammation and hepatocarcinogenesis. One of the most important and best-studied inflammatory signaling cascades involved is - indeed - the NF-kB pathway. NF-kB can be activated by different stimuli like tumor necrosis factor or Interleukin-1 and controls the transcription of inflammatory and anti-apoptotic genes [18]. One important step in the activation of NF-kB is represented by activation of a high-molecular-weight kinase complex, the so-called IKK complex, consisting of two catalytic subunits, IKK1 (IKKa) and IKK2 (IKKb), as well as a regulatory subunit called NEMO (IKKg). Upon activation of this pathway by TNF, the IKK complex is recruited to adaptor proteins like TRAF2 and RIP1 and is activated by the kinase TAK1, so it can phosphorylate the inhibitory protein IkBa and mediate nuclear translocation of NF-kB (Fig. 1). In the DEN-rodent model, inhibition of NF-kB by conditional liver specific deletion of IKK2 led to increased liver-tumor formation [19], suggesting that the proinflammatory NF-kB signaling pathway suppresses hepatocarcinogenesis. In contrary, inhibition of the NF-kB signaling in the Mdr2-knockout mouse led to a strong decrease in hepatocarcinogenesis compared to mice with proficient NF-kB signaling, arguing for a tumor-promoter-function of this pathway [16]. Similarly, lack of NF-kB signaling strongly decreased chronic hepatitis and prevented hepatocarciniogenesis in the LT ab liver-tumor model, with the only difference that liver tumor formation also occurred in the absence of TNFR1 [17]. The reason for this obvious contradiction between the different murine HCC models has not been solved, meaning that it is presently not clear if NF-kB inhibition might be an option for chemoprevention of hepatocellular carcinoma in humans. Possibly, suppression of NF-kB signaling might be only beneficial for particular subtypes of human HCC – but this will need further investigation. 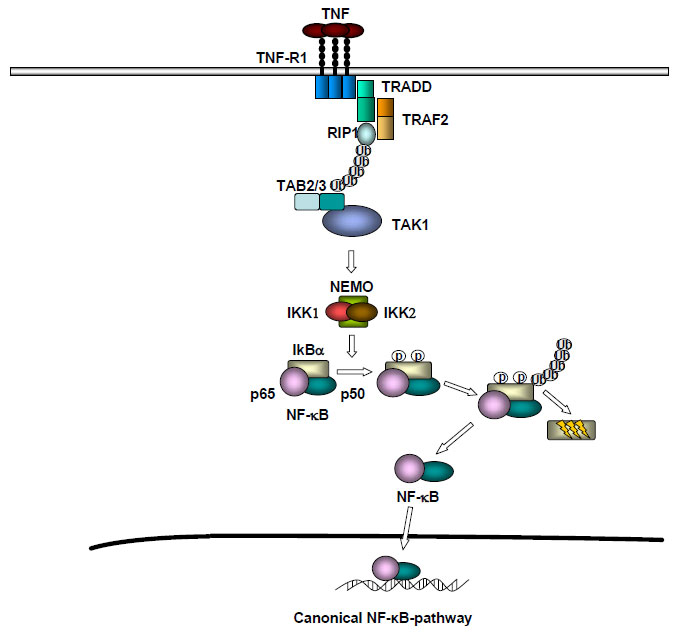