Non-smallcell lung cancer (NSCLC) is one of the most common malignant tumors and a leading cause of mortality worldwide. Chemotherapy is a crucial strategy for advancedstage NSCLC. Paclitaxel (Taxol), which targets microtubules of cancer cells, has been widely used in cancertreatment [1, 2]. Paclitaxel disrupts the dynamic equilibrium between soluble tubulin dimers and their polymerized form to stabilize the microtubule structure. In addition, paclitaxel is an effective inhibitor of chromosomal replication by obstructing cancer cells in the late G2 or mitotic phases [3]. However, the efficiency of paclitaxel-based chemotherapy is limited by the development of acquired resistance. Increasedexpression of multidrug resistant proteins and anti-apoptotic proteins isthe main cause of paclitaxel resistance [4]. However, the specific molecular mechanisms involved in paclitaxel resistance are complex and not completely understood.

In 1920s, Otto Warburg demonstrated that cancer cells exhibit increased glycolysis, even when oxygen is abundant. This phenomenon of enhanced aerobic glycolysis is known as the Warburg effect [5, 6]. Cancer cells, unlike normal cells, often use aerobic glycolysis instead of mitochondrial oxidative phosphorylation (OXPHOS). The Warburg effect is closely associated with drug resistance in cancer cells. Agents that target glycolysis or OXPHOS have shown promising efficacy in overcoming dug resistance [7–9].

A549 cells were treated with increasing concentrations of paclitaxel in culture medium for selection of paclitaxel-resistant cells. After 6 months, one resistant cell clone (A549-R) was obtained from the A549 parental cell line and was used for subsequent experiments. 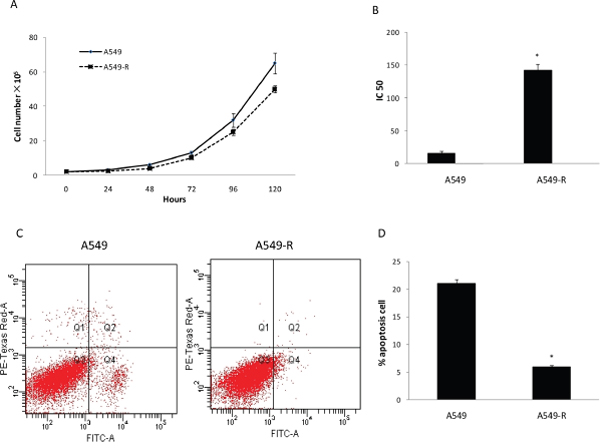 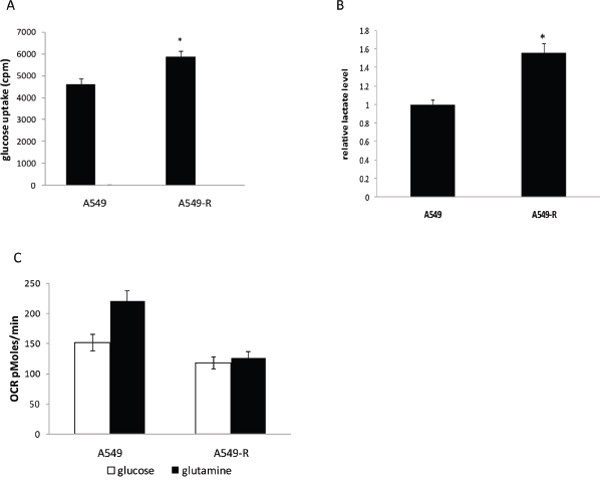 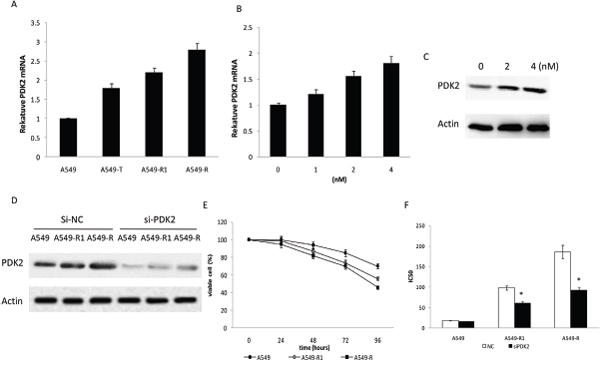 We further assessed whether suppression of PDK2 re-sensitizes A549-R cells to paclitaxel by suppression of glycolysis or activation of OXPHOS. As shown in Figure 4A, knockdown of PDK2 increased OCR by 10 ± 3.8% in A549-R cells, and 28.5 ± 5.5% in A549 cells (P<0.01, compared with untreated control). When glutamine was used as a carbon source, PDK2 siRNA inhibited glutamine oxidation through an unclear mechanism (Figure 4B). Furthermore, knockdown of PDK2 inhibited glutamine oxidation more effectively in drug resistant cells. 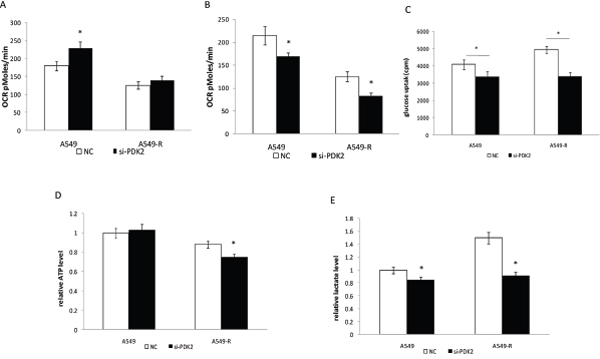 The Warburg effect is closely associated with drug resistance in cancer cells [17, 18]. Glucose uptake and lactate generation ability areimportant indicatorsof cell glycolytic activity. In our study, we found that knockdown of PDK2 reduced glucose uptake and lactate production inA549-R cells (Figure 4C, 4D). Next, we analyzed the effect of PDK2 suppressionon ATP production and glycolysis. PDK2 suppression decreased ATP generation in A549-R cells, but failed to reduce ATP production in A549 cells (Figure 4E). These results indicate that targeting A549-R cells by PDK2 knockdown is attributed to inhibited glycolysis rather than increased OXPHOS in paclitaxel-resistant cells. To elucidate the mechanism of reduced glucose uptake and lactate production, the effect of PDK2 suppressionon the expression of glucose transporter1 (GLUT1) and the glycolytic enzyme lactate dehydrogenase A (LDHA) was investigated (Figure 5A). A significant decrease in GLUT1 expression was observed following PDK2 knockdown in A549 and A549-R cells; however, expression of LDHA was not changed after PDK2 knockdown in A549 cells or A549R cells.

Next, we examined the effect of PDK2 knockdown on the expression of c-Myc and HIF-1α, two major transcription factors that regulate the expression of GLUT1. Interestingly, c-Myc protein levels were not changed after PDK2knockdown in A549 cells, but PDK2 suppression reduced the c-Myc levels compared to untreated control in A549-R. HIF-1α levels were decreased after treatment in A549 and A549-R cells. In addition, PDK2 suppression decreased HIF-1α in A549-R cells compared to A549 cells. These results indicate that PDK2suppression inhibits glycolysis more significantly in paclitaxel resistant cells.

DCA, a small chemical compound, inhibits PDK-mediated inactivation of PDH (pyruvate dehydrogenase) and diverts glucose metabolism from glycolysis towards OXPHOS [13]. As shown in Figure 6A, the effect of DCA on A549 cell viability was assessed. DCA treatment decreased cell viability in a dose-dependent manner in both A549 and A549-R cells. A549-R cells displayed increased sensitivity to DCA compared to A549 cells, consistent with the results of PDK2 knockdown by siRNA.

As down-regulation of PDK2 by siRNA or DCA inhibited the viability of A549-R cells, the effect of combining paclitaxel with DCA on paclitaxel-resistant cells was investigated. In A549-R cells, paclitaxel combined with DCA was markedly more effective in inhibiting cell viability compared with either agent used alone (Figure 6B). These results demonstrate that the combination of paclitaxel with DCA has a greater capacity to decrease the viability of paclitaxel-resistant cells compared to either agent used alone.

Paclitaxel is a widely used chemotherapeutic agent for the treatment of malignant tumors, including lung cancer. However, the resistance of cancer cells to paclitaxel is an important issue and can lead to subsequent recurrence and metastasis of malignant tumors [19–21]. To date, the specific molecular mechanisms involved in paclitaxel resistance are still poorly understood. Although the Warburg effect is closely associated with drug resistance in cancer cells, the relationship between the Warburg effect and paclitaxel resistance is unclear.

Previous studies have demonstrated that PDK2 plays a critical role in OXPHOS, glycolysis, and tumor maintenance of cancer cells [22, 23]. Suppression of PDK2 increases apoptosis of cancer cells via activated OXPHOS, suggesting that it might be used as a therapeutic strategy for treatment of malignant tumors. However, the role of PDK2 in paclitaxel resistance of cancer cells has not been studied. Our study indicates that paclitaxel increases PDK2 expression in A549 cells by increasing PDK2 transcription. Suppression of PDK2 by PDK2 siRNA or the inhibitor DCA increases sensitivity of A549 and A549-R cellsto paclitaxel. This indicates that the paclitaxel-induced PDK2 expression in paclitaxel-resistant cells may be an adaptive mechanism in these cells to modulate glycolysis and OXPHOS to avoid the paclitaxel-inducedapoptosis. In addition, since PDK inhibition was more effective in suppressing cell growth of the resistant A549-R cells than the parental A549 cells, these results suggest that PDK2 may serve as an effective target for overcoming paclitaxel resistance in patients with lung cancer. To our knowledge, this is the first report to demonstrate the role ofPDK2 in acquired paclitaxel resistance in human lung cancer cells.

Previous studies have indicatedthat the Warburg effect contributes to drug resistance of cancer cells [24]. However, the underlying molecular mechanisms remain largely unclear. The current study demonstrates that the paclitaxelresistance of A549 cells is associatedwith increased glycolysis and suppressed oxidative phosphorylation. Furthermore, our study indicates that PDK2 suppression reversesthe paclitaxel resistance through suppression of glucose glycolysis rather than activation of OXPHOS in paclitaxel resistant cells.

HIF-1α and c-Myc are two major oncogenic transcription factors known to regulate metabolism in cancer cells [25–27]. HIF-1α and c-Myc can up-regulate transcription of GLUT1, sustaining the Warburg effect in cancer cells [28, 29]. PDK2 knockdown had no significant effect on c-Myc levels in A549 cells, but strongly inhibited c-Myc expression in paclitaxel resistant 549-Rcells. In addition, in both A549 cells and A549-R cells, PDK2-siRNA decreased HIF-1α levels. Since the effect of PDK2 knockdown was more pronounced in drug resistant cells, these results suggest that PDK2 can target paclitaxel resistant cells to inhibit glycolysis. The combination of paclitaxel with DCA was more effective in killing paclitaxel-resistant cells, compared to either paclitaxel or DCA treatment alone. The synergistic inhibitory effect of the combination therapy indicates that it might represent an effective strategy to overcome the paclitaxel resistance of NSCLC cells.

Human lung adenocarcinoma cell line A549 was obtained from the Chinese Academy of Sciences. A549R and A549R1 cells are paclitaxel-resistant clones developed as previously described [19]. Briefly, the parental A549 cellswere exposed to increasing paclitaxel concentrations, and the surviving resistant A549-R cells were cultured in DMEM containing 5 mM glucose supplemented with 10% fetal bovine serum (FBS), sodium pyruvate and L-glutamine. A549 cells treated with 4 nM paclitaxel for 48 h were designated as A549-T cells. Lipo2000 (Invitrogen) was used for transient transfection according to the manufacturer’s protocol. Control siRNAand siRNA-PDK2 were purchased from Pharma (China).

Cells were cultured in 12-well culture plates, then detached, washed twice, and subsequently incubated in 500 μl of DMEM containing 4 μCi/mL of 18F-flurodeoxyglucose (18F-FDG) for 1 h at 37°C. Pellets were washed twice with ice-cold phosphate buffered saline (PBS). Cell lysates were obtained using 500 μl of 0.1 M NaOH, and then the radioactivity of the whole-cell lysates was assayed using a well γ-counter. The readouts were normalized to corresponding protein amounts (Beyotime).

Cells were seeded onto 6-well plates and transfected with PDK2 siRNA, or treated with DCA. Approximately 48 h after transfection, cells were washed and cultured in serum-free DMEM for 16 h. Lactate levels in the medium were measured using a lactate assay kit (CMA Microdialysis). The readouts were normalized to corresponding protein amounts (Beyotime).

Oxygen consumption rate (OCR) was measured using the Seahorse XF24 analyzer (Seahorse Bioscience). Cells were seeded in a 24-well culture plate and allowed to attach overnight. Approximately 30 min prior to the assay, culture medium was changed to the Seahorse assay medium (DMEM containing 5 mM glucose or 2 mM L-glutamine) and OCR was measured according to the manufacturer’s instructions.

Cell survival rate was examined using the Cell Counting Kit-8 (CCK-8; Dojindo Molecular Technologies), which is based on dehydrogenase activity detection in viable cells. Cells were plated in 96-well culture plates at a density of 6000 cells/well. After 24 h, the medium was replaced with DMEM containing 10% FBS and drugs at the indicated concentrations. Following 24 h incubation, 10 μL of CCK-8 solution was added to each well, and cells were further incubated for 2 h. Absorbance was read at 450 nm using a micro-plate reader. Tocalculate IC50, A549 and A549-Rcells werecultured with increasingpaclitaxelconcentrations, and the IC50 value was calculated using the GraphPad Prism version 5.0 software.

Relative cellular ATP content was measured using the ATP bioluminescent somatic cell assay kit (Sigma, St. Louis, MO, USA) according to the manufacturer’s instructions. Briefly, 2×105 cells were seeded in a 24-well plate. After 24h, cells were washed, centrifuged, and lysed. Lysates were collected, and luminescence was measured using a luminescence reader and normalized to the protein concentration. Measurements were performed in triplicates [9].

We thank Dr. Yaer Hu of Shanghai Jiao Tong University School of Medicine for her assistance in isotopic tracing analysis.

This work was supported by a grant from the National Natural Science Foundation of China (No. 81571710) and Bengbu medical college of science and technology development fund project (BYKF1405).