Results: Chemokine receptor CXCR1 was lowly expressed in normal breast tissues and breast fibroadenoma, but highly expressed in breast cancer. It was significantly correlated with pathological stage, tumor cell differentiation, and lymph node metastasis (P < 0.05). After neo-adjuvant chemotherapy, CXCR1 expression in breast cancer tissues decreased. Among these 104 breast cancer patients with different molecular subtypes, the survival rate with Luminal A was the highest, followed by the Luminal B breast cancer, TNBC was the worst.

Materials and Methods: 104 cases with breast carcinoma, 20 cases with normal breast and 20 cases with breast fibroadenoma were included and followed up. Immunohistochemistry was used to detect the expression of CXCR1 in the various tissues. The relationship between the CXCR1 expression changes in breast cancer biopsies and surgical specimens, as well as the efficacy of neo-adjuvant chemotherapy, was analyzed.

Conclusions: Chemokine receptor CXCR1 could be used as an indicator to predict benign or malignant breast disease, and it can even predict the malignancy degree of breast cancer, as well as its invasive ability and prognosis.

Breast cancer is one of the common malignant tumors in women, which has received increasing attention [1]. Neo-adjuvant chemotherapy was a new progress in the comprehensive therapy of breast cancer. Pathological characteristic changes in primary tumors before and after chemotherapy could accurately determine the efficacy of neo-adjuvant chemotherapy, which is advantageous for clinical research. Current studies had found many chemokines and receptors relating to the occurrence and development of breast cancer such as CXCR4, CCR5 and CCL12. Recently the chemokine receptor CXCR1 has also been reported to have an important role in the progression of breast cancer [2–4]. 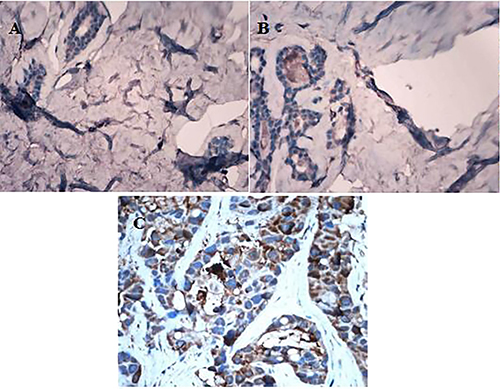 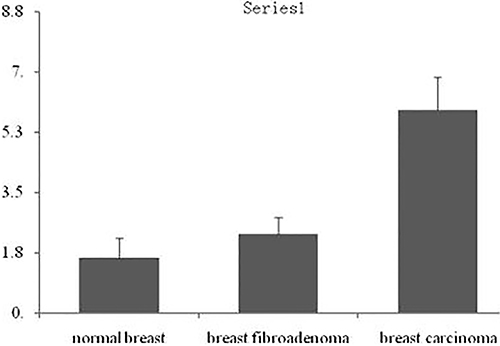 Table 1: The expression of CXCR1 was different with various clinical parameters of patients (

Note: All measurement data was expressed in the formation as

Table 2: The expression of CXCR1 declined after neo-adjuvant chemotherapy. (

All measurement data were assessed using the two-sample matching test and single-factor analysis of variance, and was expressed in the formation as

± SD. In the single-factor analysis of variance, the least significant difference (LSD) was used to compare every two groups. P < 0.05 was considered statistically significant.

Table 3: The prognosis of different molecular subtypes of breast cancer was different

Note: The case of breast cancer patients with different molecular subtypes and the expression of CXCR1 in each prognosis were expressed, and the survival rate was calculated.

Among the breast cancer patients with different molecular subtypes, the survival rate of Luminal A breast cancer was the highest, followed by Luminal B breast cancer, and the prognosis of TNBC was significantly worse than that of the other types (Table 4).

Note: The prognosis of patients with different molecular subtypes was different, and their survival rate was calculated.

The development of breast cancer is an extremely complex process, which is possibly associated with a variety of oncogenes, tumor suppressor genes, and transcription factors. However, its exact mechanism remains not fully understood. In recent years, the role of chemokines, which is a kind of pro-inflammatory cytokine [5, 6], has received extensive attention in the development of tumors. Numerous studies [7, 8] have confirmed that kinds of tumors can autocrine CXC chemokines and their receptors. These secreted products may have anti-tumor effects by activating immune cells or inhibiting angiogenesis [9]. Furthermore, they could also have a direct effect in enhancing motor abilities and chemotaxis in tumor cells, as well as having indirect effect in promoting angiogenesis and the digestion of the extracellular matrix to promote tumor growth and metastasis by stimulating tumor growth [10]. It has been reported [11–14] that the use of CXCR1/CXCR2-specific antibodies in vitro can inhibit melanoma tumor growth.

A total of 104 breast cancer patients were divided into different groups based on age, primary tumor size, pathological stage, cell differentiation, metastatic lymph node number, status of hormone receptor, the expression of Her2 and other clinical parameters, and were compared with each other in each group. It was found that the expression of CXCR1 in breast cancer tissues revealed no correlation with age and the size of the primary tumor, but revealed significant differences with the stage of pathology, degree of cell differentiation, metastasis of the lymph node, status of the hormone receptor and the expression of Her2.

The expression of CXCR1 in breast cancer tissues was higher in patients with negative hormone receptors, positive Her2, worse cell differentiation, more lymph node metastasis and later pathology stage. Meanwhile these patients had worse prognosis. These results suggest that chemokine receptor CXCR1 could auxiliarily predict the degree of malignancy of breast cancer, as well as its invasive ability and prognosis.

Chemokines and their receptors have a bi-directional natural role in the development and metastasis of tumors in both promotion and inhibition. These might have an anti-tumor effect by activating immune cells or inhibiting angiogenesis. However, in the meanwhile, these could have a direct effect in increasing motor abilities and chemotaxis in tumor cells, as well as having indirect effect in promoting angiogenesis and the digestion of the extracellular matrix, in order to promote tumor growth and metastasis by stimulating tumor growth [19]. This natural role should be considered when chemokines are applied in tumor treatment. The use of a receptor antagonist had the ability to suppress the growth and metastasis of tumors. For example, Wileu et al. [20] found that CCL21 acting on CCR7(+)B16 melanoma can suppress the metastasis of tumors. All of these provided new ideas.

This study found that after neo-adjuvant chemotherapy, the expression of CXCR1 in breast carcinoma decreased. The higher it decreased, the more severe the pathological reaction, and the better the efficacy of neo-adjuvant chemotherapy. In other words, the expression of chemokine receptor CXCR1 had been greatly decreasing in the process of neo-adjuvant chemotherapy for breast cancer, and there was a positive correlation between the expression of CXCR1 and neo-adjuvant chemotherapy response. If CXCR1 blockers were applied to inhibit its expression, the therapeutic response might be further improved. Scientists in the Comprehensive Cancer Center of Michigan University revealed that there was an association between breast cancer stem cells and inflammation in new studies, and chemokine receptor CXCR1 was also identified on the surface of breast cancer stem cells, which had the ability to stimulate cancer stem cell growth under the stimulation of tissue breakdown or inflammation. CXCR1 was a receptor of IL-8, which often generated in the process of chronic inflammation and tissue injury [21]. When patients who suffered from breast cancer underwent chemotherapy, the dead cells would produce IL-8, which would further promote the replication of cancer stem cells that contributing to the recurrence and metastasis of breast cancer [22]. A mouse model for human breast cancer in this study revealed that during the therapy of breast cancer, adding drugs to block CXCR1 would help kill breast cancer stem cells to improve treatment effect. Recently Laura Brandolini et al. [2] have also found that Reparixin, a powerful CXCR1 inhibitor, was effective in reducing the development of tumor and its recurrence.There is a broad prospect for the study of CXCR1, which might become an effective target for anti-tumor therapy. It is necessary to study and explore the role of CXCR1 in the development of breast cancer and the feasibility of this targeted therapy. Once it is widely used in the clinic, it would be another epoch-making breakthrough in the history of malignant tumor therapy.

We prospectively evaluated 104 female patients with the mean age of 55.30 ± 9.14 years, who suffered invasive breast cancer. These patients were treated in NanJing Drum Tower Hospital, the Affiliated Hospital of Nanjing University Medical School, from January 2008 to December 2012. All patients were diagnosed by core needle biopsy and underwent neo-adjuvant chemotherapy according to NCCN guidelines. Based on the assessment of clinical status, 3–4 cycles of chemotherapy were carried out before performing the modified radical mastectomy of breast cancer or breast conserving surgery. We collected pre-operative biopsy specimens and post-operation paraffin specimens (including the primary tumor) of the above-mentioned 104 patients and 20 specimens with normal breast tissue (distance to the primary tumor > 10 cm). Furthermore, 20 cases with breast fibroadenoma were also collected during the same period.

The paraffin sections of above specimens were dewaxed, hydrated and antigen-repaired. CXCR1 antibody and antibody diluent were diluted at 1:40 according to NBP1-88143 instructions. Each section was placed in a refrigerator at 4°C overnight after adding 100 μl of the primary antibody. The matching secondary antibody was added the next day and was set in an incubation temperature box in the following day. Next, we began DAB dyeing under a microscope following the dehydration and sealing piece. And phosphate-buffered saline (PBS) instead of the primary antibody was chose as the negative control.

Reading of sections under the microscope (×400 times)

Five fields of vision were taken from section. The score was given on the basis of the percentage of positive cells and staining intensity in each vision. The score of the percentage of positive cells was assigned based on the proportion of positive cells in view of total cell population as follows: < 10% for 0 points, 10% ~ 25% for 1 point, 26% ~ 50% for 2 points, 50% ~ 75% for 3 points and > 75% for 4 points. The staining intensity score was assigned by dyed color as follows: positive cells without coloring noted for 0 points, dyed pale yellow noted for 1 point, dyed tan noted for 2 points, dyed brown noted for 3 points. These two scores were then summed as the positive integral (PI).

According to NCCN guidelines, all 104 breast cancer patients received postoperative therapies such as chemotherapy, radiation and hormone therapy. They received follow-up from the day of discharge at the end of the operation, every three months in three years, and every six months three years later. Breast cancer recurrence or distant metastasis could be found by clinical and histological examinations. All patients received telephone follow-up every six months until June in 2016 or the patient’s death.

Miao-Qun Xue,Jun Liu, Jian-FengSang, LeiSu, Yong-Zhong YaoSubstantial contributions to the conception or design of the work; or the acquisition, analysis, or interpretation of data for the work; AND 2)Miao-Qun Xue drafting the work or revising it critically for important intellectual content; AND 3) Miao-Qun Xue final approval of the version to be published; AND 4) Yong-Zhong Yao agreement to be accountable for all aspects of the work in ensuring that questions related to the accuracy or integrity of any part of the work are appropriately investigated and resolved.

Appreciating for all participants’hard work.

This work was supported by Program for Medical Science and Technology Development in Nanjing, Jiangsu Province (YKK10080).