Giant cell tumor of bone (GCT) is an aggressive osteolytic and potentially metastatic bone tumor, which has a predilection anatomic sites of long bones such as distal femur, proximal tibia and distal radius [1]. High recurrence rates of 18–60% following aggressive surgical resection have been reported for GCT, which rarely undergoes malignant transformation [2–5]. However, distant metastasis of GCTs of the bone is extremely rare. Lung metastasis of a benign GCT of the bone was first reported in 1926. One of the most common organs for distant metastasis from GCT is lung, ranging from 1 to 9% in incidence [6–9].

We previously demonstrated that patient derived tumor cells (PDCs) are feasible preclinical model which closely resemble the patient tumor genome and clinical response [14]. The micropillar/microwell chip platform has been developed to facilitate miniaturized 3D cell cultures and perform high throughput, biochemical and cell-based assays [15]. Owing to the importance of microenvironment, especially in GCTs where both stromal and tumor cells are important components of the tumor, we utilized 3-D HTS to screen for potentially efficacious anti-cancer drug in metastatic GCT PDC model. 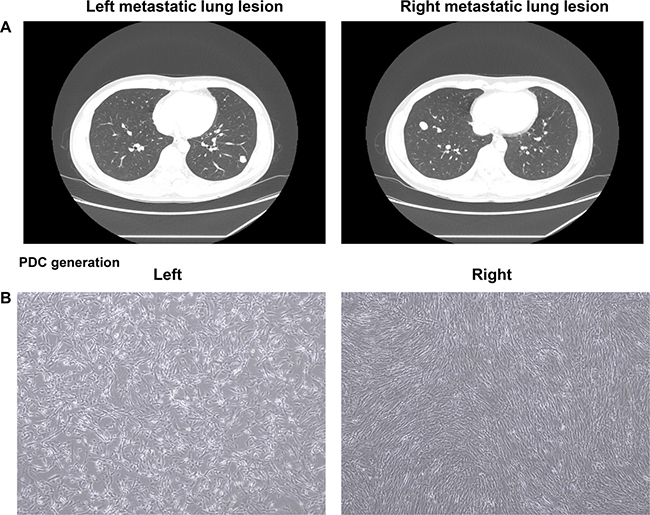 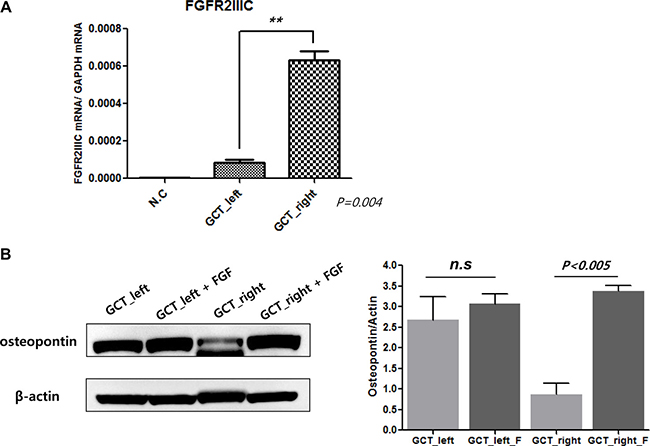 We compared the outcomes between the HTS-platform with 3D cultured cells on the micropillar/microwell chip and a conventional MTT assay with 2D cultured cells. For PDC models derived from right and left metastatic nodules of a patient with giant cell tumor, the IC50 values of AZD4547 were evaluated using these two methods. The IC50 values of drugs tested against 3D cultured PDCs on the chip could divide two PDC models (right vs. left) according to molecular heterogeneity. However, a conventional MTT assay with 2D cultured cells didn’t draw the response heterogeneity to drug for two PDC models (right vs. left) according to molecular heterogeneity. This discrepancy may be caused by the difference of reflections for tumor heterogeneity, microenvironments, and phamacogenomic information between 2D- and 3D-cultured cells. The difference in IC50 values between 3D and 2D cell culture systems has already been reported and is considered a distinctive characteristic of cells cultured in 3D systems [16, 17]. Culturing human primary cells from patients under conditions more similar to those in vivo, such as 3D microenvironments, can potentially provide valuable insight into in vivo drug efficacy as the 3D cell cultures can maintain specific biomedical and morphological features that resemble those of the corresponding tumor. Conventional HTS has been based on two-dimensional (2D) cell monolayer cultures [18]. The formation of tumor-like 3D structures is strongly inhibited in 2D monolayer cultures by the strong affinity of cells for most artificial surfaces and the restriction to a 2D space. Thus, the results of HTS based on 3D cell cultures might reflect far better the relation between the tumor-biology and the matched targeted agent as compared to a conventional 2D cultured MTT assay.

In addition to interpatient response heterogeneity, understanding intrapatient response heterogeneity is also essential for designing effective therapeutic strategies in the era of precision medicine [19]. The functional impact of intrapatient heterogeneity on cancer remains to be fully understood. Intrapatient heterogeneity influences the dynamic tumor landscape and plays a key role in shaping response to specific therapies [20, 21]. The difference in sensitivity to specific drugs between PDCs originating from right and left metastatic lesions may be caused by intertumor heterogeneity, i.e., the presence of different genetic alterations in different metastatic tumors from a single patient (Figure 3). With the advent of therapies targeting specific oncogenes, it is possible to use mutation detection strategies aimed at these oncogenes to assess tumor specimens for intertumor heterogeneity. Such heterogeneity is potentially important because it has been shown to affect responses to molecularly targeted treatments in cancers. Although we clearly recognize the significance of intertumor heterogeneity for realizing precision medicine, it is not easy to overcome it. It is impossible to perform molecular profiling of multiple metastatic lesions from the same patient to evaluate the presence of intertumoral heterogeneity because of the high cost. Thus, a HTS platform based on 3D culture of PDCs on micropillar/microwell chips might be a useful approach for evaluating the presence of intertumoral heterogeneity. To the best of our knowledge, this is the first study to evaluate the intrapatient tumor/response heterogeneity through HTS on the 3D cell culture micropillar/microwell chip platform using PDCs.

In conclusion, An HTS platform based on 3D culture on micropillar/microwell chips and PDC models could be applied as a useful preclinical tool to evaluate the intrapatient tumor/response heterogeneity. This platform based on 3D culture might reflect far better the relation between the tumor-biology and the matched targeted agent as compared to a conventional 2D cultured MTT assay.

Cultured cells (passage 1 to 2) were harvested with TrypLE Express. Genomic DNA was isolated using a QIAamp DNA Mini Kit (Qiagen, GmBH, Hilden, Germany) and total RNA was isolated with an RNeasy Mini Kit (Qiagen) according to the manufacturer’s instructions. The concentrations of genomic DNA and RNA were measured using a NanoDrop ND-100 (Nano Drop Technologies, Wilmington, DE, USA). Genomic DNA and RNA were stored at –80°C.

After pathologic confirmation, cells were seeded at a density of 1–2 × 106 cells/10-mm dish or 5,000 cells/well in 96-well plates for immunoblot analysis and cell proliferation assays and treated for 3–5 days with various doses of drugs, as indicated. Inhibition of cell proliferation was determined using Cell Titer Glo (Promega, Madison, WI, USA) according to the manufacturer’s protocol.