Diffuse large B-cell lymphoma (DLBCL) is the most common lymphoid neoplasm, with a wide range of outcomes predicted by the International Prognostic Index (IPI) [1, 2]. Although the introduction of rituximab (R) to the chemotherapy combination of CHOP (cyclophosphamide, doxorubicin, vincristine, and prednisone) has improved prognosis and allowed some tailoring of therapy, a significant fraction of DLBCL patients still fail treatment and die [3–6].

Antibody-dependent cellular cytotoxicity, mediated by effector cells that engage CD20 and the Fc portions of the antibody via receptors (FcγRs) of immunoglobulin, is thought to contribute most to the efficacy of the antibody against malignant cells of B-cell lymphomas [7, 8]. The T allele of CD20 rs2070770 was significantly associated with superior progression-free survival (PFS) [9], while Ding et al. found no significant association [10]. For FCGR2A, gene-gene interactions analysis revealed rs1801274 and IL1RN rs419598 combination significantly related to adjusted OS of DLBCL in Denmark [11]. And a significant increased NHL risk was observed for the rs1801274 in US [12]. However, no statistically significant difference in survival was found according to rs1801274 allele in Korea [13]. Reactive oxygen species (ROS) involved in cellular functions mediate the therapeutic effects of anticancer drugs. NAD(P)H oxidase is an important endogenous source of ROS, and the small GTPase RAC2 is required for the NAD(P)H oxidase activity [14]. Kim IS et al. observed ABCG2 rs2231142 polymorphism may correlate with chemotherapy-induced diarrhea in Korean patients [15]. Other host’s single nucleotide polymorphisms (SNPs) affecting genes involved in drug metabolism, detoxification and transport may contribute to the prognostic stratification and the predicted toxicity in DLBCL patients [16–23]. However, the impact of genetic polymorphisms on drug activity/metabolism and subsequently treatment outcome in DLBCL patients is largely unclear.

Therefore, in this study we assessed the effects of the nine SNPs in the CD20, FCGR2A, NAD(P)H, ABCC2, ABCG2 and CYP3A5 gene on survival in a cohort of 189 Chinese DLBCL patients treated with R-CHOP to define specific subgroups more likely to benefit from therapy.

Table 1: Clinical characteristics of the DLBCL cohort at diagnosis

The correlation of clinical characteristics with variant genotypes

We detected the association between the variant genotypes and the clinicopathological data of DLBCL according to ECOG (PS=0 vs. >1), B symptom, Bulky, Extranodal sites (0 vs. >1), LDH level (positive vs. negative), Bone marrow involvement, IPI scores (0 to 5), Ann Arbor stage (I, II vs. III, IV), and Subtype (non-GCB vs. GCB). However, the various SNPs were not correlated with clinical characteristics.

Response to therapy and outcome

Figure 1: Kaplan–Meier curves illustrate progression-free survival (A) and event-free survival (B) of patients with R-CHOP chemotherapy according to the variant genotypes of NCF4 rs1883112. 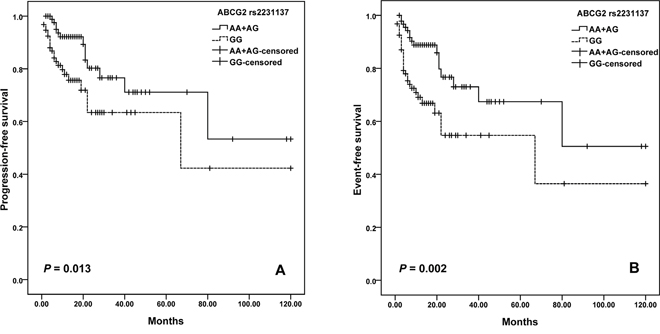 Figure 2: Kaplan–Meier curves illustrate progression-free survival (A) and event-free survival (B) of patients with R-CHOP chemotherapy according to the variant genotypes of ABCG2 rs2231137. 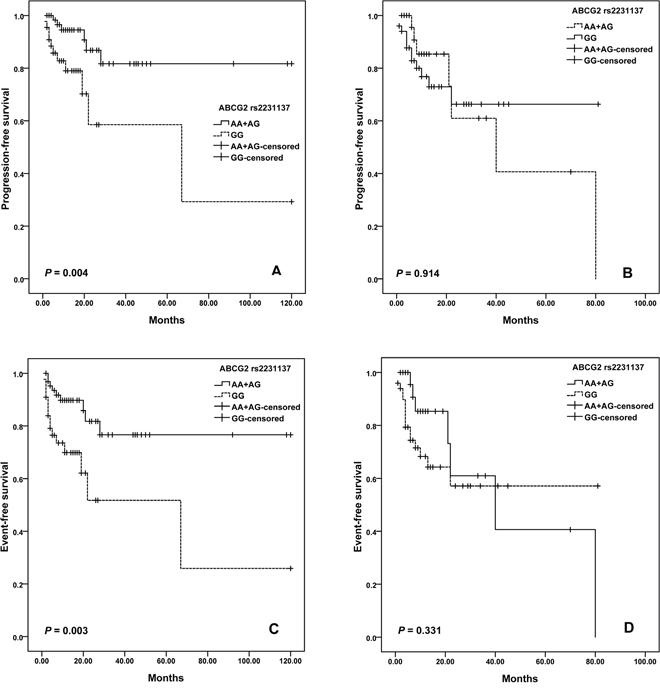 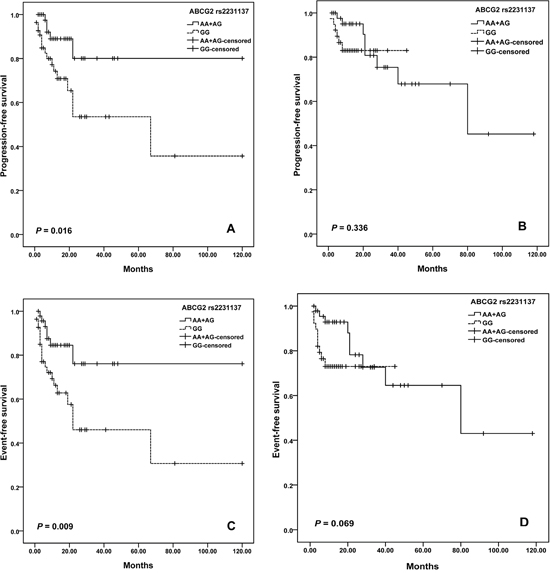 Table 2: Association between polymorphisms and grade 3–4 hematological toxicity in DLBCL

b OR and 95% CI values were calculated by logistic regression.

In this study, we document that: (1) Significantly shortened PFS and EFS after R-CHOP chemotherapy was observed in the patients with NAD(P)H oxidase subunits (NCF4 rs1883112) GG genotype; (2) ATP-binding cassette transporters (ABCG2 rs231137) may predict PFS and EFS; (3) Elder (>60 years old) or male patients with GG genotype of rs2231137 displayed poor PFS and EFS comparing with A allele; (4) NADPH RAC2 rs13058338 (AT) and CD20 rs2070770 (CC) were independent predictors of chemotherapy-induced toxicity of DLBCL patients.

Rituximab bound to CD20 antigen can be recognized by Fcγ receptor on NK cells and macrophages to mediate killing or phagocytosis of the tumor cells [7]. Studies of neutrophils have shown that NCF4 encodes the p40phox subunit of the NAD(P)H oxidase which regulates Fcγ receptor-induced superoxide generation following the internalization of phagosomes [26, 27]. Meanwhile, overproduction of ROS involved in neutrophil death upon exposure to chemotherapy [28], and doxorubicin cardiotoxicity [29], and NAD(P)H oxidase is one of the major sources for superoxide generation [30, 31]. Moreover, activation of NCF4 induces ROS-mediated epithelial-mesenchymal transition (EMT) signaling in HeLa cells [32]. Reconstitution of patient B cells with a NCF4 wild-type could restore exogenous Ag presentation and intracellular ROS generation [33].

ABCG2 gene located on chromosome 4q22, is a ATP-binding cassette transporter, which increase efflux of doxorubicin, vincristine and prednisone from the cell cytoplasm to the extracellular compartment [35]. ABCG2 is one of the major multidrug resistance (MDR) pumps [36], and targeting ABCG2 may have therapeutic value in overcoming chemoresistance in DLBCL [37–40]. Heuvel-Eibrink MM et al. found increased expression of ABCG2 was associated with drug resistance in MCF7 cell lines [41].

The ABCG2 rs2231137 polymorphism results in valine to methionine substitution in the amino acid sequence of the protein. Kondo C et al. observed no significant difference in the levels of protein expression or transport activity of ABCG2 protein between rs2231137 A and G variant in LLC-KP1 cells [42]. While Poonkuzhali B et al. found a significantly lower ABCG2 mRNA expression was found in liver tissue of Hispanics with the rs2231137 variant genotype than the individuals with wild genotype. It may be due to alternative splicing of mRNA in rs2231137 variant individuals [43]. One study observed a significantly higher risk of grade 3 or more toxicity was found in the patients with rs2231137 A allele compared to the patients with GG genotype [44]. In another study, rs2231137 AG/AA genotypes were found to be independent factors for protecting against infection [21]. In the current study, we observed that DLBCL patients treated with R-CHOP carrying the rs2231137 GG genotype displayed a poorer PFS and EFS compared to patients who carried the AA or GG genotype. Notably, in this study we found that rituximab clearance and efficacy might be gender-biased. Pfreundschuh et al. reported that a better outcome was associated with a slower rituximab clearance and longer exposure times for elderly females but not males [45], while Jaeger et al. suggested that men with a low IPI treated with rituximab had the best outcome [46]. Although no gender or age biased was found for the all patients, we found that elder patients (>60 years old) or male patients with GG genotype of rs2231137 had poorer outcomes comparing with A allele. Further studies are needed for the optimization of rituximab dose and schedule in all subgroups of DLBCL patients.

To date, the prognostic value of FCGR2A polymorphism as markers to predict treatment outcome in DLBCL is still being studied [11–13]. Moreover, in rs2070770, the exchange of T to C alleles does not alter the encoded amino acid, so this SNP is not able to change the structure or function of the CD20 protein. It is not yet known the potential role of rs2070770 polymorphism in the susceptibility and prognosis of ritumixab therapy. Rs13058338 TA/AA genotypes were reported to be associated with anthracycline-induced cardiotoxicity in the patients with aggressive CD20+ B-cell lymphoma (mainly diffuse large B cell NHL) in Germany and Italy [8, 21, 22]. Despite the small number of chemotherapy-induced cardiotoxicity in patients, we found that DLBCL patients who carried rs13058338 AT genotype showed a low risk of developing grade 3-4 hematological toxicity. The rs13058338 AT genotype may be a protective factor in DLBCL patients, but further studies are required to confirm the association.

However, the number of patients limited the statistical analysis to demonstrate the relationship between polymorphisms and patient response to chemotherapies. Larger sample sizes and prospective studies, independent collection of clinical outcome and genotyping data, tumor tissue expression analysis, and in vivo functional studies are needed to confirm our results and to clearly characterize the underlying mechanisms.

In conclusion, our study suggests that SNPs involved in the host pharmacogenetics of R-CHOP may have a significant role in predicting the failure of therapy and toxicity in patients with DLBCL in the Chinese population. Our findings will help develop a highly cost effective DLBCL treatment based on these predictive and prognostic biomarker tests.

This cohort of patients had newly diagnosed, histopathologically confirmed, and untreated DLBCL. Some blood samples for the genotyping were not available for the patients who were recruited early in the study and these patients were not included in final analysis. Patients without follow-up and those receiving only palliative treatment were excluded. A detailed questionnaire, including requests for demographics information, was administered to all subjects.

The R-CHOP 21 protocol was identical to the CHOP 21 protocol, except for the addition of intravenous infusion of rituximab (375 mg/m2/d) over 4 to 6 h at day 1 before the administration of CHOP drugs. Patients in complete remission received a total of six courses chemotherapy, while patients in partial remission completed eight courses of treatment after four courses. According to Ann Arbor criteria, patients with advanced-stage disease received radiotherapy to bulky sites after chemotherapy. Dose reduction and support treatment were prescribed according to R-CHOP 21 guidelines [5, 6]. The response to therapy was evaluated at the end of the fourth course and at the end of treatment. Follow-up visits were scheduled every 3 months for the first 2 years and every 6 months thereafter.

The study was approved by the Ethics Committee of Harbin Medical University with the following reference number, HMUIRB20160004. All participants provided written informed consents and all efforts had been made to protect patient privacy and anonymity. The study was conducted according to the Declaration of Helsinki.

PRIMER5 (http://frodo.wi.mit.edu/) was used to design primers for each SNP within a multiplex. Extension primers were chosen from the sequence up- or down-stream of each SNP immediately, and the primers are listed in Table 4.

Responses were scored according to the International Working Group criteria [25], and assessed by Fisher exact test and Armitage trend test. Progression-free survival (PFS) was defined as time to disease progression, relapse, or death. Event-free survival (EFS) was defined as the time from the beginning of therapy to disease progression, relapse, death, or initiation of additional (off-protocol) or salvage therapy. The endpoints included complete response (CR), partial response (PR), overall response rate (ORR), stable disease (SD), progressive disease (PD), PFS, and EFS. For each SNP, dominant and recessive genetic models were selected for analysis and the model with highest statistical significance was considered to be the best-fitting model. Survival distributions were estimated with the Kaplan–Meier method and compared with the log-rank test. Multivariate analyses were done using Cox proportional-hazard models to estimate hazard ratios and their 95% confidence interval (CI) for having an event. Analysis for toxicity was performed by Binary-logistic regression analysis with SNP genotypes as the explainable variables.

The statistical analyses were performed using the Statistical Package for Social Sciences (SPSS) version 13.0 statistical software. Statistical significance was set at P< 0.05 and all tests were two-sided.

1. Jaffe ES. The 2008 WHO classification of lymphomas: implications for clinical practice and translational research. Hematology Am Soc Hematol Educ Program. 2009; 523-531.

7. Mitroviç Z, Aurer I, Radman I, Ajdukoviç R, Sertiç J, Labar B. FCgammaRIIIA and FCgammaRIIA polymorphisms are not associated with response to rituximab and CHOP in patients with diffuse large B-cell lymphoma. Haematologica. 2007; 92: 998-999.

17. Cascorbi I. Role of pharmacogenetics of ATP-binding cassette transporters in the pharmacokinetics of drugs. Pharmacol Ther. 2006; 112: 457-473.

35. Cascorbi I. Role of pharmacogenetics of ATP-binding cassette transporters in the pharmacokinetics of drugs. Pharmacol Ther. 2006; 112: 457-473.