Gastrointestinal malignancies present an ever-increasing global public health threat, including several types of cancer, such as esophageal, gastric, liver, pancreatic and colorectal cancer. These malignancies have a high mortality rate, especially in less developed regions of the world [1]. The overall survival (OS) rates for gastrointestinal malignancy remain low despite advances in early diagnosis and clinical treatments over the last several decades [2]. Therefore, the identification of new biomarkers to screen out high-risk patients and predict gastrointestinal cancer prognosis is urgent.

An overwhelming number of studies have proven that Histone Deacetylase 1 (HDAC1) is tightly correlated with cancer. For example, HDAC1 has been demonstrated to be overexpressed in many cancers, such as in breast, lung and renal cell cancer, as well as in classical Hodgkin’s lymphoma [3–6]. In addition, HDAC1 overexpression is often associated with poor prognosis in breast and lung cancer [3, 4]. Moreover, HDAC1 silencing by siRNA results in cell cycle arrest, cell growth inhibition, and induction of apoptosis in breast and colon cancer cells [7, 8], while HDAC1 overexpression leads to an increase in cell proliferation in prostate cancer cells [9], indicating that HDAC1 stimulates cancer cell growth. Taken together, these findings suggest that HDAC1 may be a good diagnostic and prognostic marker for some types of cancer. However, the role of HDAC1 in the progression and prognosis of gastrointestinal malignancy is largely unknown.

Study selection and characteristics of the included studies 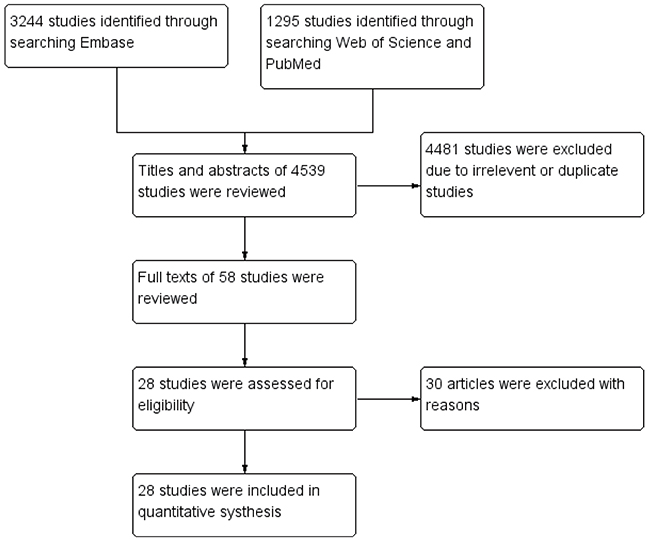 All characteristics of the 28 studies are listed in Table 1. Among the studies, sixteen originated from Asia, eleven from Europe and one from America. A total of 2368 cases were enrolled. An immunohistochemistry assay was used in 22 studies, whereas a real-time polymerase chain reaction (RT-PCR) assay was used in six studies. The Newcastle-Ottawa Scale (NOS) was used to assess the methodological quality of the included studies, and the results showed that all the studies had high-quality (Table 2).

Table 1: Main characteristics and results of the included studies

Sub-group analysis was then performed by cancer type. As shown in Figure 3A, the expression level of HDAC1 in colorectal cancer was higher than that in control tissue samples (OR = 10.84, 95% CI = 5.33–22.07, P < 0.00001). There was no significant difference in HDAC1 expression levels between gastric cancer tissues and control tissues (Figure 3B), but only two studies with high heterogeneity (I2= 96%) were enrolled. Only one study investigated esophageal, liver or pancreatic cancer separately. Together, these results suggest that the expression level of HDAC1 in gastrointestinal malignancies, especially in colorectal cancer, is higher than that in noncancerous tissues. 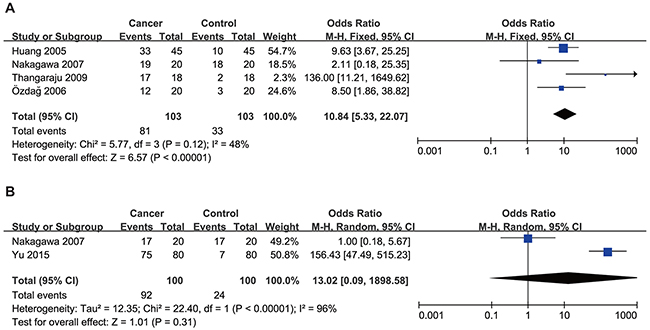 Table 3: Sub-group analyses were stratified on the basis of histology

However, the groups positive and negative for lymph node metastasis (OR = 1.49, 95% CI = 0.85–2.61, P = 0.16) (Figure 6), as well as distant metastasis (OR = 1.67, 95% CI = 0.91–3.08, P = 0.10) (Figure 7), did not show a significant difference in HDAC1 expression in the gastrointestinal cancer patients overall. In the sub-group analyses (Table 3), we found that the HDAC1 expression level was higher in the lymph node metastasis-positive group than in the negative group with gastric cancer (OR = 1.60, 95% CI = 1.07–2.40), and the group positive for distant metastasis showed higher HDAC1 expression than the negative group in patients with colorectal cancer (OR = 3.67, 95% CI = 1.38–9.79). The other analyses showed no significant difference or were short studies (no study or only one). Collectively, these findings suggest that there are tight correlations between HDAC1 expression and the clinical features of gastrointestinal cancer patients. 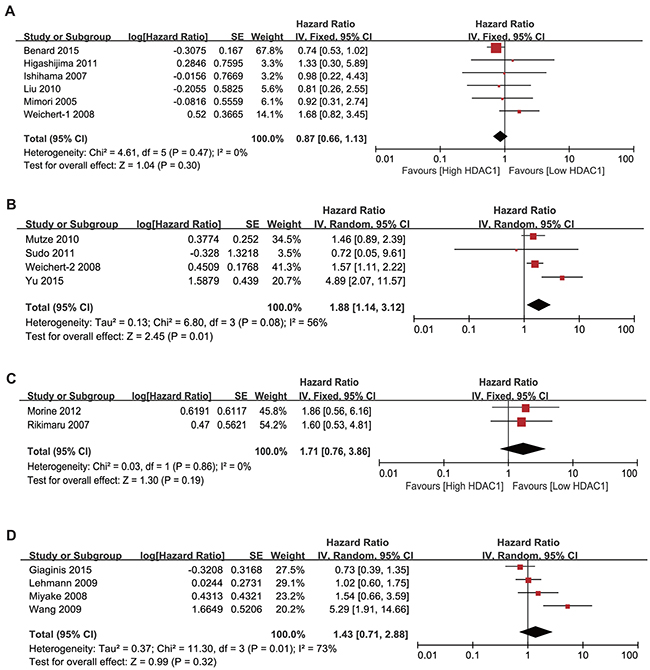 Sensitivity analyses were performed by omitting a study at a time. The results were not significantly changed, indicating the stability of the present analyses. The funnel plots were almost symmetric, suggesting that there were no significant publication biases in these meta-analyses (Supplementary Figures 1-6).

HDAC1 expression in gastrointestinal malignancies is controversial. For example, in several studies HDAC1 overexpression was detected in over 54% of gastric cancer tissues in both mRNA and protein levels [16, 17, 37], but another study [38] found that HDAC1 was downregulated in gastric tumors compared with the level in adjacent non-tumors. Additionally, the HDAC1 expression level has been reported to be increased in colorectal cancer tissue as compared to normal tissue [21], but there was no significant difference between colorectal cancer and normal tissue in another study [11]. In this analysis, we found that HDAC1 expression in colorectal cancer tissues is higher than that in normal tissues. Much more work needs to be done for other types of gastrointestinal cancer.

This study has several limitations. First, the cut-off value to determine positive or negative expression of HDAC1 varied across the included studies. Second, the number of cohorts included for some analyses was insufficient, making the results less convincing. Therefore, the role of HDAC1 expression in gastrointestinal cancer progression and prognosis warrants further study.

HDAC1 has been served as a target for cancer therapy, and small molecule HDAC inhibitors have been used in clinical treatment of patients with several types of cancer, such as T-cell lymphoma and multiple myeloma currently. Consistent with this, the present analysis revealed the important clinical value of HDAC1 expression in gastrointestinal malignancy. In conclusion, HDAC1 expression might be a good biomarker for the diagnosis and prognosis of gastrointestinal cancer patients.

A systematic literature search was conducted for original articles analyzing the correlation between HDAC1 expression and the progression and prognosis of several types of gastrointestinal malignancy in PubMed, Embase and Web of Science. Studies were selected using the following keywords: “HDAC1” or “Histone Deacetylase 1” for HDAC1; “CRC”, “colorectal cancer” or “colorectal carcinoma” for colorectal cancer; “gastric cancer”, “gastric neoplasm”, “stomach cancer” or “stomach neoplasm” for gastric cancer; “esophagus cancer” or “esophageal neoplasm” for esophageal cancer; “hepatocellular cancer”, “hepatocellular carcinoma” or “liver cancer” for liver cancer; and “pancreatic cancer” or “pancreatic neoplasm” for pancreatic cancer. The search ended on November 20th, 2016, and no lower date limit was used. No language restriction was applied, and the references of the relevant studies were also screened to check for potentially relevant articles.

The full text of each relevant study was carefully evaluated. The studies collected in the present meta-analysis were required to meet the following criteria: (1) HDAC1 expression was measured by PCR or immunohistochemistry; (2) the clinical features or prognosis of gastrointestinal malignancy were investigated; and (3) the correlation of HDAC1 expression with clinical features and survival outcomes was analyzed. When several studies collected data from the same patient group, the most recent study was used; if the most recent study did not meet the inclusion criteria, the highest quality study was used. Articles were excluded if (1) they were case reports, letters, or reviews without original data; (2) they focused on animal models or cancer cells; (3) the expression of HDAC1 was determined by western blot; or (4) the full text was unavailable. All evaluations were independently performed by two authors, Lin-Lin Cao and Zhihong Yue, to ensure the accurate inclusion of studies. Disagreement between the two authors was resolved by reaching a consensus in accordance with the original article.

Two authors, Lin-Lin Cao and Zhihong Yue, independently extracted data from the eligible studies. The following information was extracted from each included study: first author’s name, publication year, country, sample size, age, HDAC1 detection method, the cut-off value, histology, stage, follow-up period and outcome. If there were no original data for HDAC1 expression and only a histogram was provided, we used Engauge Digitizer 4.1 (http://digitizer.sourceforge.net) to extract the expression data. If the cut-off value of HDAC1 expression was not provided, the mean value of all samples was considered to be the cut-off value. In addition, if hazard ratios (HRs) for overall survival (OS) rates according to HDAC1 expression were not reported directly, the number of deaths and total samples in each article were extracted for HR calculation. If only the Kaplan–Meier curves were available, the survival data were extracted using Engauge Digitizer 4.1 and analyzed as described previously [39].

Two reviewers (Lin-Lin Cao and Zhihong Yue) independently assessed the quality of the included studies according to the Newcastle-Ottawa Scale (NOS) (http://www.ohri.ca/programs/clinical_epidemiology/oxford.asp). The scale consists of three components related to sample selection, comparability and ascertainment of exposure.

Analysis was conducted using Review Manager 5.3 (Cochrane Collaboration, Oxford, UK). The ORs with 95% CIs were used to compare the HDAC1 expression level of cancer tissues with that of noncancerous tissues and to analyze the association between the expression level of HDAC1 and clinical features of gastrointestinal malignancy. HRs with 95% CIs were used to evaluate the correlation of HDAC1 expression with the overall survival of gastrointestinal cancer patients. The random-effect model was applied when I2> 50%, and the fixed-effect model was used in the absence of between-study heterogeneity (I2 ≤ 50%). P values of <0.05 were considered to be statistically significant. Publication bias was evaluated using the funnel plot.

We thank all of the group members for helpful discussions. This work was supported by Beijing Natural Science Foundation grant 7164305.

The authors have declared that no conﬂicts of interest exist.