Purpose: Genetic alterations such as activating KRAS and/or inactivating TP53 are thought to be the most common drivers to tumorigenesis. Therefore, we assessed phase I cancer patients with KRAS+/TP53+ mutations.

Conclusions: This study provided preliminary evidence that besides modulation of the proinflammatory state, antiangiogensis and concomitant gene aberration-related therapies may improve the treatment of KRAS+/TP53+ mutant cancer.

However, KRAS mutation alone, which occurs in the early process of tumorigenesis, is not sufficient to induce malignant transformation of normal epithelial cells [5, 6]. Additional loss of tumor suppressor genes, such as TP53 [7, 8], is required for cancer development, which arises through sequential accumulation of oncogenic mutations and loss of tumor suppressor genes. Somatic TP53 mutation is the most common genetic aberration in tumor suppressor genes, occurring in 10% to 96% of human cancers [9]. Functional TP53 mutations lead to ablation of cell cycle arrest and DNA damage repair, as well as overexpression of nuclear target genes, resulting in genomic instability and tumor development [10]. Dual mutations in TP53 and KRAS (KRAS+/TP53+, + indicates positive hotspot test) occur in up to 20% of advanced solid tumors [11–14]. In genetically engineered mouse models, mice harboring both the TP53 R172H and KRAS G12D mutations had a significantly shortened latency, and thus more tumors than mice with the KRAS G12D mutation alone [7, 15].

Because concurrent KRAS and TP53 mutations manifest potentially synergistic biologic effects, cancers carrying both KRAS and TP53 mutations (KRAS+/TP53+) might represent a unique cancer subtype with distinct and aggressive biologic behaviors [16]. Blockade of downstream signaling pathways such as RAF/MEK or PI3K/AKT/mTOR in KRAS-mutant cancer [17] and antiangiogenic-based therapy in TP53-mutant cancer would be appropriate therapeutic strategies [18, 19]. Unfortunately, effective therapies directly targeting TP53 or KRAS mutations are not available and these mutations are currently considered undruggable [20, 21].

Many phase I clinical trials include patients with malignancies arising from undruggable genetic mutations, but it is unclear which types of therapies are most promising for the treatment of these malignancies. Therefore, it is of great scientific interest and clinical urgency to explore potential therapeutic options for malignancies with undruggable genetic mutations. In the current study, we reviewed demographics and clinical outcomes of patients with advanced KRAS+/TP53+ mutant cancers who were referred to phase I clinical trials at The University of Texas MD Anderson Cancer Center. Our aims were to investigate specific genetic aberrations associated with clinical outcomes and to identify potential therapeutic regimens for the treatment of advanced KRAS+/TP53+ mutant cancers.

From March 2102 to October 2014, 2, 144 consecutive patients with advanced cancers were referred to phase I clinical trials at MD Anderson and underwent molecular tests for tumor genetic aberrations. Among these patients, 167 (7.8%) harbored concurrent KRAS and TP53 hotspot mutations (KRAS+/TP53+ mutant cancer), 182 (8.5%) harbored KRAS+/TP53– hotspot mutations, and 839 (39.1%) harbored KRAS–/TP53+ hotspot mutations (- indicates negative hotspot test). Four patients with KRAS+/TP53+ mutant cancer had insufficient clinical data and were not included in our analysis. The baseline characteristics of the remaining 163 patients are summarized in Table 1.

Association of OS with genetic aberrations 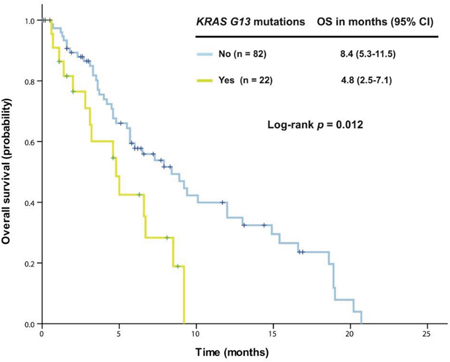 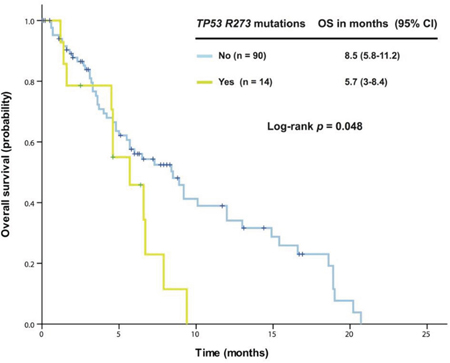 Exploratory study of a prognostic model

We were unable to apply the Royal Marsden Hospital score [22] or the MD Anderson prognostic score [23] to the 57 patients who received therapy in a phase I clinical trial. Therefore, we decided to explore a prognostic model specific to patients with KRAS+/TP53+ mutant cancer. First, we analyzed the association of OS with potential risk factors using univariate and multivariate analyses in these 57 patients (Table 2). Five independent poor risk factors were identified for predicting individual survival outcome: neutrophilia, thrombocytosis, hypoalbuminemia, body mass index <30 kg/m2, and the absence of lung metastasis. These parameters were then extracted using binary subgroups (no = 0, yes = 1) to explore a risk prognostic model predictive of OS after the initial phase I clinical trial visit. This model classified the patients into one of two risk cohorts (p < 0.001; Figure 3): a low-risk group (score ≤ 1, n = 40) associated with a median OS of 16.6 months (95% CI 12.9-20.4) or a high-risk group (score > 1, n = 17) associated with a median OS of 5.4 months (95% CI 3.7-7.1).

Table 2: Univariate and multivariate analyses of OS in 57 patients who received a phase I trial therapy 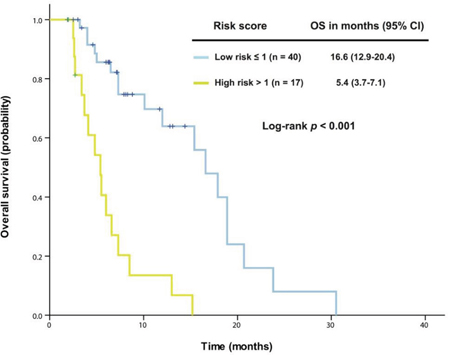 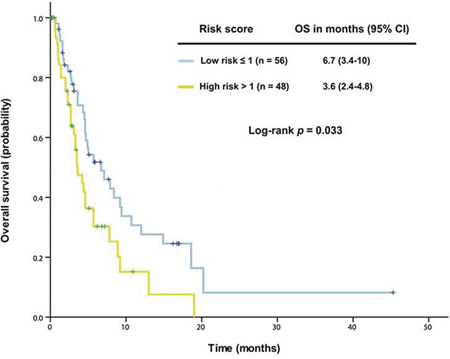 Figure 4: The established prognostic model was validated in 104 patients with advanced KRAS+/TP53+ mutant cancer who did not receive therapy in a phase I clinical trial. Kaplan-Meier overall survival (OS) curves are shown, stratified by risk score (low-risk group: score ≤1, high-risk group: score >1) (due to sample size, all p values are unadjusted).

Our findings suggest that the KRAS G13 and TP53 R273 mutations are associated with poor outcome in patients with KRAS+/TP53+ mutant cancer, and antiangiogenic therapy combined with therapy targeting specific genetic aberrations may be an effective treatment strategy. To the best of our knowledge, the current study is the first to analyze clinical outcomes of patients with advanced hotspot KRAS+/TP53+ mutant cancers who were referred to a phase I clinical trial program at MD Anderson.

KRAS and TP53 are frequently mutated in many types of cancer. Although they are highly attractive therapeutic targets, they remain outside of the reach of direct pharmacologic intervention [20]. Until a breakthrough is achieved with a direct pharmacologic approach, alternative strategies for addressing these undruggable targets remain under investigation [24]. Unfortunately, we found that only approximately one-third of patients with advanced hotspot KRAS+/TP53+ mutant cancers received treatment in a phase I clinical trial, much less than the overall rate of 55% of all patients who were referred to phase I clinical trials at the same institution [25].

In our cohort of patients with KRAS+/TP53+ mutant cancer, approximately two-thirds of patients had KRAS G12 mutations and one-sixth had G13 mutations. Although the absence of a G13 mutation is usually associated with poor prognosis in pancreatic cancer, the presence of a G13 mutation was associated with significantly shorter OS than other KRAS mutations in our full cohort of patients with KRAS+/TP53+ mutations and in those with colorectal cancer. This is consistent with previous findings showing that the KRAS G13 mutation was an independent prognostic factor for poor metastasis-free survival in colon cancer compared with either wild-type KRAS or G12 mutation [27, 28].

We observed a total of 83 types of TP53 mutations in our cohort, and most were located in the DNA binding domain. In contrast with a previous study showing that patients with hotspot TP53 R273 mutant ovarian cancer had significantly longer median OS than those with other hotspot TP53 mutations [29], our study revealed that a hotspot TP53 R273 mutation was associated with poor survival in patients with metastatic colorectal cancer. These inconsistent data imply that different cell contexts may lead to different outcomes, which warrants further investigation clinically and preclinically.

Although genetics likely play an important role in tumorigenesis, the inflammatory process is initiated by the movement of innate immune system cells to the microenvironment, followed by the secretion of proinflammatory cytokines, growth factors, and reactive oxygen species, causing DNA damage and promoting neoplastic development, as has been found in many tumor types [6]. Our multivariable analysis revealed that five independent baseline factors (neutrophilia, thrombocytosis, hypoalbuminemia, body mass index <30 kg/m2, and the absence of lung metastasis) were able to predict individual outcome not only in patients with KRAS+/TP53+ mutant cancer who had received therapy in a phase I clinical trial, but also in those who had not received therapy. Four of these prognostic factors are related to the proinflammatory state, which works alongside KRAS and TP53 mutations to enhance tumor progression and develop resistance to cancer therapy, resulting in poor clinical outcomes [30–32]. Therefore, a thorough understanding of the mechanisms of the proinflammatory state in conjunction with cancer-related gene aberrations may provide a scientific rationale to develop effective therapeutic strategies for advanced KRAS+/TP53+ mutant cancer. Though we cannot completely explain association of the absence of lung metastasis with poor outcome, we did observe that phase I metastatic colorectal cancer patients with pulmonary metastasis had a relatively slow process for tumor progression, which might reflect different biologic properties of these tumors, and requires further investigation.

Our study has limitations. First, the retrospective setup and limited sample size might yield statistical bias. Due to multiplicity of statistical testing in such small sample size, all p values are exploratory and unadjusted. Second, data from patients with hotspot KRAS+/TP53-, KRAS-/TP53+, and KRAS-/TP53- cancer were not available for our analysis of patients with metastatic KRAS+/TP53+ mutant cancer, which limited our ability to reach conclusions from data comparison among these four groups of patients.

We retrospectively reviewed 2,144 consecutive patients with advanced cancers who were referred to phase I clinical trials at MD Anderson from March 2102 to October 2014 and who had sufficient tumor tissue specimens available for next generation sequencing. Among these patients, 167 harbored concurrent hotspot mutations in the KRAS and TP53 genes. Patient baseline demographics, laboratory results, gene aberrations, status of phase I clinical trial therapy, and clinical outcomes were obtained from electronic medical records. All patients were followed until death or censored on March 10, 2016. Trial conduct, data collection, and subsequent data analysis were performed in accordance with the guidelines of the MD Anderson Institutional Review Board (IRB) after the IRB approval for the research and a waiver of informed consent were obtained.

The decision to enroll an eligible patient in a phase I clinical trial depended on the protocol availability and the discretion of the treating physicians. Tumor responses (CR = complete remission, PR = partial response, SD = stable disease, and PD = progressive disease) were evaluated according to Response Evaluation Criteria in Solid Tumors (RECIST) version 1.0 or 1.1 [35, 36], depending on individual protocols. Progression-free survival (PFS) was calculated from the date of initiation of a phase I clinical trial therapy to the date of first objective documentation of PD, death, or censor date. PFS for patients alive and progression-free at last evaluation should be censored at date of last clinical evaluation. Overall survival (OS) was calculated from the date of the initial phase I clinical trial visit to the date of death or censor date. Time to death for patients alive at last contact should be censored at date of last contact.

We found that hotspot KRAS+/TP53+ mutations occurred in approximately 8% of cancer patients referred to our institution for phase I clinical trials, and that the KRAS G13 mutation, as well as the TP53 R273 mutation, were associated with poor OS. Antiangiogenesis and gene aberration-related therapies may improve overall survival in patients with concurrent KRAS+/TP53+ hotspot mutant cancer. Also our data also suggest that the proinflammatory state is a key event in cancer development, facilitated through evolving gene aberrations. The current study has provided further support that the combination of modulating the proinflammatory state via immunotherapeutic agents [37] with expanding pharmacologic manipulation to address undruggable molecular cancer targets may lead to novel and effective approaches to the treatment of KRAS+/TP53+ mutant advanced cancer.

The authors declare that there are no conflicts of interest regarding the publication of this paper.