Mucinous adenocarcinoma (MAC) of the colorectum accounts for approximately 10% of colorectal cancers (CRCs) and is diagnosed when >50% of the tumor is composed of extracellular mucin pools containing malignant epithelia [1, 2]. MAC is more common in women; it presents in the right colon and is generally detected at more advanced stages than non-MAC colorectal cancers [3]. The prognostic significance of colorectal MAC is controversial [2-5], but a recent meta-analysis associated MACs with slightly poorer prognosis [3]. MACs exhibit a higher frequency of DNA mismatch repair (MMR) defects, microsatellite instability (MSI) and RAS/RAF/MAPK pathway mutations than non-MACs, and a lower incidence of p53 mutations [6-9]. MACs also more frequently exhibit a CpG island methylator phenotype (CIMP). This is characterized by CpG island hypermethylation in the promoter regions of carcinogenesis-related genes, resulting in epigenetic silencing [6, 8, 10, 11].

Serrated adenocarcinoma (SAC) of the colorectum was first described by Jass in 1992 as having a close structural and histochemical resemblance to hyperplastic polyps with glandular serration [12], and was defined as a CRC subtype in the 2010 WHO classification [1]. SAC is associated with malignant transformation of serrated polyps, including sessile serrated adenomas and traditional serrated adenomas, which constitute the so-called “serrated neoplastic pathway” [13-16]. Makinen, et al. refined the SAC histological criteria to include epithelial serrations, clear or eosinophilic cytoplasm, abundant cytoplasm, vesicular nuclei, absence of or <10% necrosis of the total surface area, mucin production, and cell balls and papillary rods in the mucin [15, 17]. A previous study using these criteria found that SACs constituted 9.1% of the CRC cohort (n=927), and approximately half of these SACs contained a residual serrated adenoma precursor [18]. SACs are more often located in the proximal colon than conventional adenocarcinomas, and are associated with a lower 5-year survival [18, 19].

SAC histological features have been validated by mRNA expression profiling, which demonstrated that SACs differ from conventional adenocarcinomas both morphologically and molecularly [20]. In contrast with conventional colorectal adenocarcinoma resulting from a conventional adenoma-carcinoma sequence, SACs have a higher frequency of BRAF or KRAS mutations and higher levels of CIMP [15, 21-23]. The cause or mechanism of CIMP in CRC is not yet known. BRAF mutation might be an early event in CIMP tumors [24] and might direct CIMP development [25].

CIMP and BRAF mutations are associated with serrated CRC development, and these mutations occur frequently in MACs and SACs [7, 8, 10, 11, 15, 21-23, 26]. MACs and SACs also share other features, including right-side colon location and frequent mucin production. Whether MACs with and without SAC morphology represent two distinguishable CRC types with different behaviors is unknown. This study examined the occurrence of SAC in MACs, the correlation with clinicopathological parameters and molecular characteristics, and the prognostic implications.

There was 100% agreement among all three diagnosing pathologists in 61/88 cases (69%) separating MACs with or without SAC morphology (Figure 1). Inter-observer variation between the first investigator (Lee C. T.) and the two other observers showed moderate agreement (mean κ=0.578; range 0.462–0.693). The mean κ value for all pathologists was 0.579 (P<0.001), demonstrating moderate agreement between their diagnoses. Four cases without consensus were excluded from the SAC morphology analysis. 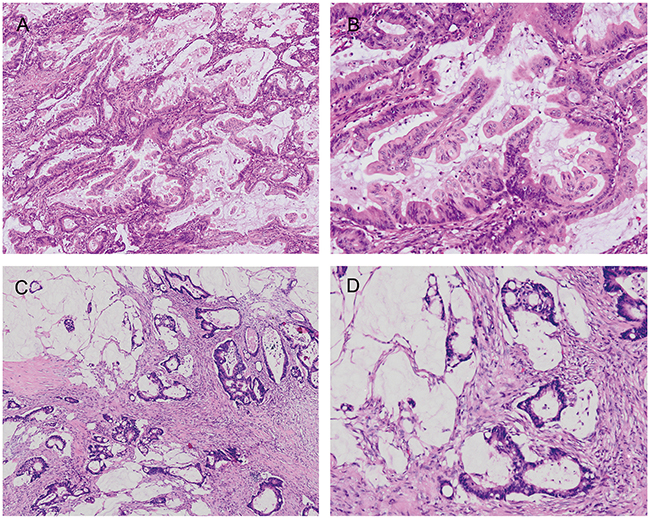 Table 1: Clinicopathologic and molecular characteristics in 84 colorectal MACs with and without SAC morphology

a Values are calculated for 52 MACs without SAC morphology unless specified otherwise, and are presented as number and percentage of patients.

b Values are calculated for 32 MACs with SAC morphology unless specified otherwise, and are presented as number and percentage of patients. 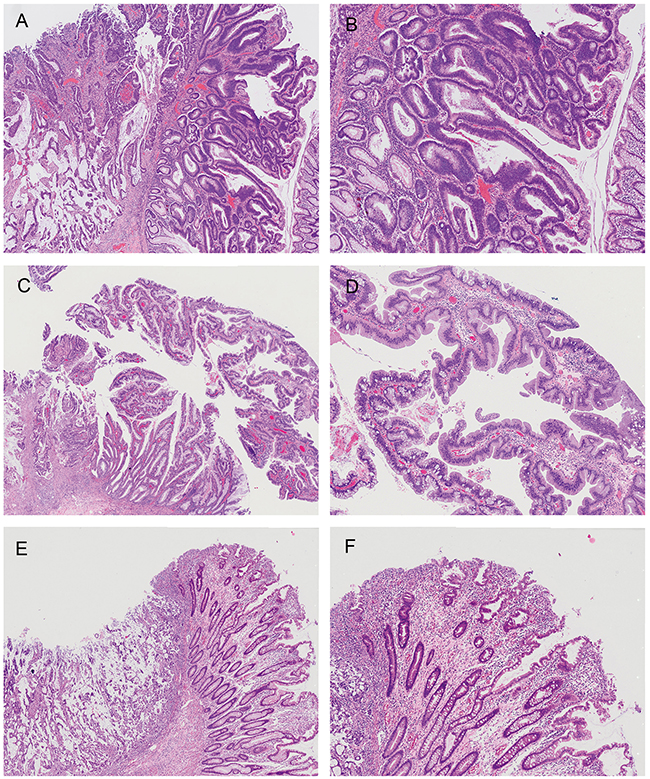 Figure 2: Lesions contiguous with the malignant tumor. MAC without SAC morphology arising in a tubulovillous adenoma, showing a mixture of tubular and villous structures and dysplastic epithelium with elongated and hyperchromatic nuclei (A & B) MAC with SAC morphology arising in a traditional serrated adenoma showing ectopic crypts, crypt serration, and abundant eosinophilic cytoplasm (C & D) There were a few serrated glands around MACs with SAC morphology, but the size was not large enough to be diagnosed as a serrated polyp (E & F) Histological SAC features of the cancer were focally seen, and were not demonstrated in the figure.

KRAS and BRAF mutations and CIMP status in colorectal MACs

Absence of MLH1 and MSH2 expression was observed in 15/88 (17%) and 5/88 (5.7%) colorectal MACs, respectively (Supplementary Table 5). All four MACs with contiguous traditional serrated adenoma were MMR proficient (pMMR), and three were located in the proximal colon.

Association of clinicopathological and molecular characteristics with patient survival

a Values are calculated for 60 patients unless specified otherwise.

b Values are calculated for 29 patients unless specified otherwise.

In multivariate analysis, AJCC stage I–III MACs without both SAC morphology and CIMP-positive status exhibited 3.955 times greater risk of cancer relapse than those having both characteristics or either one (P=0.035; Table 3) after adjusting for cancer stage. To avoid the effect of multicollinearity, we did not include the covariate “location” in this analysis. SAC morphology or CIMP status singly did not influence survival in the multivariate model (data not shown).

The histological criteria proposed by Makinen, et al. describe a colorectal cancer subtype with distinct serrated architecture associated with serrated polyps. Previous studies and ours confirmed that these criteria are feasible, with satisfactory interobserver reproducibility [18]. SAC incidence, and its association with various molecular features, had not previously been surveyed in colorectal MAC. We showed that MAC with SAC morphology tended to grow in the proximal colon with a higher frequency of “serrated pathway carcinoma” molecular features, including BRAF mutations and CIMP-positivity than MACs without SAC morphology. SAC morphology was noted in 38% of MACs in our study, a result higher than previously reported (9.1%) for SAC in colorectal cancer [18], which might explain the high frequency of BRAF mutations and CIMP-positive status in MACs.

In contrast with previous conventional CRC findings (most are non-MAC) [18, 19], patients in our study who had colorectal MACs with SAC morphology exhibited improved relapse-free survival, and this was significant in AJCC stage III MAC patients. SAC morphology was associated with proximal cancer location and CIMP-positive status, which were favorable prognostic factors in our analyses.

Prior studies of CIMP status for predicting CRC patient prognosis have been controversial [28]. Discrepancies between studies might be explained by differences in the study populations or in the methodologies and panels used to determine CIMP status. The CIMP panel we used was identified by Weisenberger and colleagues, and was validated in CRC in a large, population-based cohort [29]. CIMP panels used in many previous studies were modified from the Weisenberger panel, with new markers added. In previous studies using the Weisenberger panel, CIMP-positive status suggested good patient outcome in KRAS wild-type or MSI CRC [28, 30], but a poor prognosis in rectal cancer or CRC with chromosomal instability [30, 31].

Our study had several limitations. First, we did not include non-MACs for comparison, as our findings on the prognostic implications of SAC morphology contradicted results from studies of conventional, mostly non-MAC, CRC [18, 19]. Second, to avoid the effect of neoadjuvant therapy in histological analyses, we excluded low rectal cancer cases, which had often undergone neoadjuvant concurrent chemoradiotherapy. Third, PMS2 and MSH6 were not analyzed via IHC. However, as cases with isolated loss of PMS2 or MSH6 expression were uncommon [32], it is unlikely that this exclusion affected our main findings.

In conclusion, our results showed that two MAC groups with distinct clinicopathological and molecular features could be identified using Makinen’s criteria, and suggested a favorable prognostic role for the serrated neoplastic pathway in colorectal MAC. The relatively high SAC incidence in MACs might explain the high frequency of BRAF mutations and CIMP-positive status in MACs. A more complete understanding of the prognostic role of the serrated neoplastic pathway in colorectal MAC and conventional CRC (mostly non-MAC) will require further research.

The Institutional Review Board of the National Cheng Kung University Hospital approved this study. We identified 88 surgically resected colorectal MACs without neoadjuvant therapy by searching our electronic pathology database for records dated between 2007 and 2014. Signet-ring cell carcinomas were excluded. Tumor status was recorded according to the AJCC cancer-staging manual (7th ed.). Adjuvant chemotherapy with 5-FU was administered to patients with AJCC stage II–IV cancers following standard schedules and doses. Histology was reviewed for all cases, and diagnoses were confirmed. Six patients had one or two synchronous MACs or non-MACs, and in these cases we analyzed the largest MAC. No patient had a family history of Lynch syndrome. Proximal cancers were defined as those in the cecum, ascending, and transverse colon.

Three pathologists with >10 years of experience (Lee C. T., Tsai H. W., and Ho C. L.) reviewed the sections. MAC was diagnosed when more than half of the tumor volume was composed of extracellular mucin-containing tumor cells [1, 2]. “SAC morphology” was defined according to established Makinen’s criteria [13, 15, 17], including epithelial serrations, clear or eosinophilic cytoplasm, abundant cytoplasm, vesicular nuclei, distinct nucleoli, scarceness (<10%) of necrosis, mucin production, and cell balls or papillary rods in the mucin. Histologic evaluation details are provided in the Supplementary Methods.

“SAC morphology” for a well or moderately differentiated MAC was considered positive when the cancer met at least six of the first seven features listed above [13, 18]. We omitted the “epithelial serration” criterion for poorly differentiated MACs without glandular architecture, and those that met at least five of the first seven features were categorized as having SAC morphology. Differences in opinion for SAC morphology diagnosis were resolved by re-evaluating the sections to reach a consensus.

Any lesions contiguous with the cancer were also evaluated. Conventional (tubular, tubulovillous, and villous) adenoma, sessile serrated adenoma, and traditional serrated adenoma were classified according to WHO classifications [1].

CIMP status was assessed using the Weisenberger panel (CACNA1G, IGF2, NEUROG1, RUNX3, and SOCS1) with an automated real-time, PCR-based MethyLight system as previously described (Supplementary Methods) [33]. All primer sequences were published previously [33]. Tumor samples were categorized as CIMP positive if methylation was detected in ≥3/5 genes, and CIMP negative if methylation was detected in ≤2/5 genes.

Relationships between categorical characteristics were analyzed via χ2 test or Fisher’s exact test. κ values were calculated to assess observer agreement for SAC morphology diagnosis. κ<0.2 indicated poor agreement, 0.21–0.40 was fair, 0.41–0.60 was moderate, 0.61–0.80 was good and >0.8 was very good [35].

Relapse-free survival was calculated from the date of surgery. Events were defined as any disease recurrence shown histologically or via imaging. Survival analyses included only patients with AJCC stage I–III colorectal MACs. Patients who were followed-up for <3 years were excluded unless an event occurred or the patient had died. Patients who died within one month of surgery and patients who had more than one cancer were also excluded from survival analyses. The significance of various covariates was assessed using univariate analysis with the log-rank test. Survival curves were calculated using the Kaplan-Meier method. A multivariate model was constructed through stepwise selection with P set at 0.05 for a characteristic to be included or excluded from the model. All tests were 2-sided, and P<0.05 was considered statistically significant.

14. Jass JR. Classification of colorectal cancer based on correlation of clinical, morphological and molecular features. Histopathology. 2007; 50:113-130.