C3orf21 ablation promotes the proliferation of lung adenocarcinoma, and its mutation at the rs2131877 locus may serve as a susceptibility marker

In this study, we investigated the role of C3orf21 gene polymorphism at the rs2131877 locus and its contribution to lung adenocarcinoma pathogenesis. Normal lung and tumor tissue sections were collected from fifteen patients with lung adenocarcinoma for chromosome 3 open reading frame 21 (C3orf21) genotype analysis. In addition, a retrospective analysis was performed to assess the association between C3orf21 genotype and tumor markers from patient samples used in our previously published study. In parallel, we also manipulated C3orf21 gene expression either by overexpressing or ablating it in a MSTO-211H human lung cancer cell line to further understand its contribution to cell proliferation, apoptosis and migration. Our results indicated that the patients with smoking history had a significantly increased mutation (rs2131877 T/C+C/C genotype) rate (p = 0.025), in addition to higher values for the CYF211 and NSE tumor markers (p = 0.014 and p = 0.031, respectively). The retrospective analysis also confirmed that the NSE marker value was higher in patients with a C3orf21 rs2131877 T/C+C/C genotype. Furthermore, our in vitro data indicated that C3orf21 ablation promoted lung cancer cell proliferation, inhibited apoptosis and accelerated cell migration. Overall, our study concluded that C30rf21 rs 2131877 T/C+C/C genotype patients may experience increased nicotine addiction and that C30rf21 can likely serve as a susceptibility marker for lung adenocarcinoma with a higher degree of malignancy.

Lung cancer has been the most common cause of cancer-related death worldwide [1] and appears to remain a major health problem in the near future. Non-small cell lung cancer (NSCLC) constitutes 82% of the total lung cancer cases [2] with a 5-year survival rate of approximately 15% in developed countries [3]. Further understanding of the NSCLC’s molecular mechanism has led to the development of target therapies, which have improved overall survival, and the median OS has reached 3–5 years [4–11]. The Notch signaling pathway is one of many signaling pathways that have been shown to be important in NSCLC progression. The Notch protein has been shown to promote faster tissue growth and to up-regulate the self-renewal of the undifferentiated state of stem cells [12–20]. Notch activation has been shown to be stimulated by the differential O-linked glycosylation of its extracellular domain (NECD) [21], whereby O-linked glucose is added to a subset of epidermal growth factor-like (EGF) repeats in the NECD domain by protein O-glucosyltransferase 1 (POGLUT1) [22–24]. The chromosome 3 open reading frame 21 (C3orf21) gene encodes the Xyloside Xylosyltransferase 1 (XXYLT1) enzyme, which is involved in prolonging the O-linked xylose-glucose by activating the transfer of the second xylose into the notch extracellular protein EGF repetitive region and changing the Notch extracellular domain [25]. Our previous study showed that in the rs2131877 locus of the C3orf21 gene, the frequency of the T/T homozygous genotype was higher in the peripheral blood of a healthy population than in adenocarcinoma patients (40.5% vs 29.7%) [26]. Thus, we undertook this study to determine if there is a link between the changes in the C3orf21 gene mRNA expression and NSCLC development and its potential as a therapeutic target or a diagnostic molecular marker. We attempted to detect the mutation status of the rs2131877 locus in the C30rf21 gene by analyzing lung and adenocarcinoma tissues, respectively. We also attempted to identify the role of the C30rf21 gene in NSCLC using the high or low expressing lung cancer cell line MSTO-211H to detect its effects on cell proliferation, apoptosis and migration ability.

The 15 patients (7 males and 8 females) with lung adenocarcinoma were assessed for the genotype distribution of the C3orf21 rs2131877 locus. The analysis of 30 specimens (15 normal lung tissues and 15 tumor tissues) revealed that the frequencies of the rs2131877 T/C+C/C genotype were 20.0% and 33.3% in normal lung and adenocarcinoma tissues, respectively (Table 1). 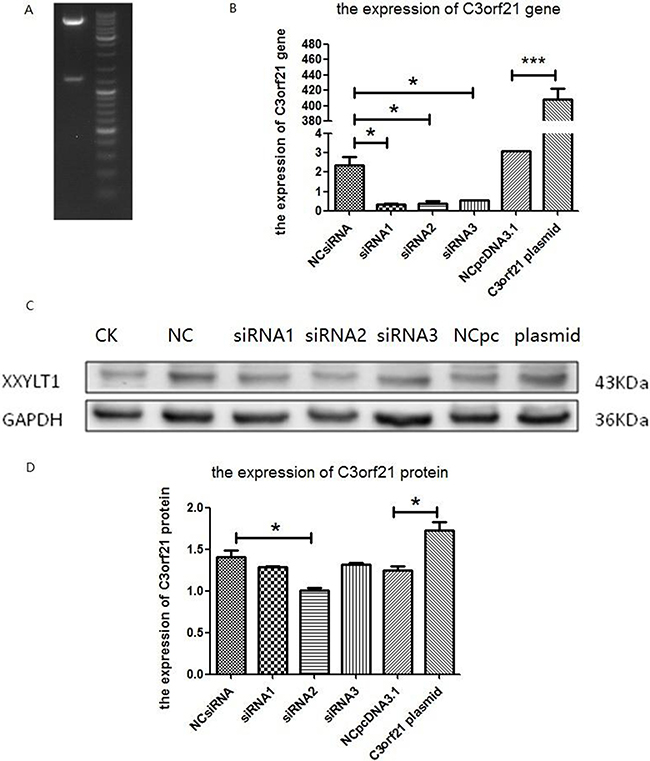 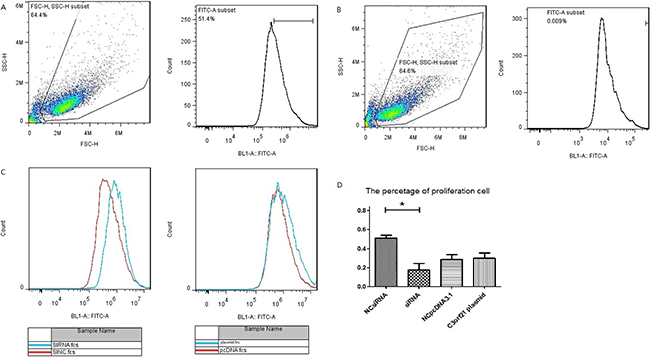 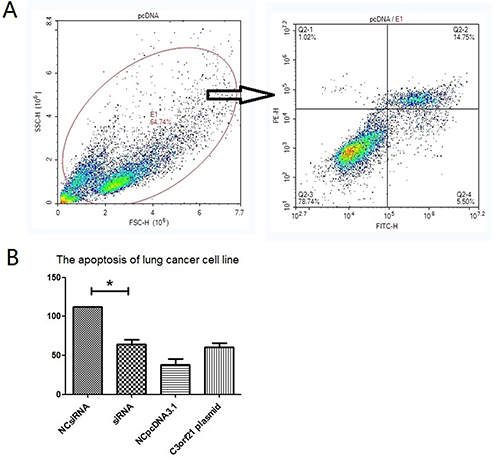 Furthermore, the Notch signaling pathway has been demonstrated to up-regulate cell proliferation and control differentiation and apoptotic processes [31]. The reduced activity of UDP-xylose:-xyloside 1,3-xylosyltransferase (XXYLT1), which is encoded by the C3orf21 gene [29], would lead to enhanced Notch signaling [32]. Notch signaling participates in TIC (tumor-initiating cells) fate in NSCLC [33, 34], and Notch deregulation has been reported to be associated with the development of lung cancer [35]. However, Notch signaling inhibitors exhibited potent antitumor activity in the lungs [36]. Our study revealed that the ablation of the C3orf21 gene (XXYLT1) promoted lung cancer MSTO-211H cell proliferation, inhibited apoptosis and accelerated cell migration. However, its overexpression did not significantly alter cell proliferation or apoptosis, and this could be attributed to the fact that C3orf21 (XXYLT1) over-expression in Notch signaling was dependent on the specific tissue context, microenvironment, and crosstalk with other signaling pathways. The Notch 1 protein has also been known to suppress tumor proliferation under normoxia in lung cancer; however, it exhibited the opposing role of tumor promotion under hypoxia conditions [37]. Additional research is required to elucidate this aspect.

Fifteen patients (seven male and eight female) who were newly diagnosed with lung adenocarcinoma and underwent surgical treatment between March 2008 and November 2009 at Zhejiang Cancer hospital were recruited for this study. All subjects provided informed consent, and the study was approved by the ethics committee of Zhejiang Cancer Hospital. A total of 15 normal lung tissues and 15 cancer tissues were obtained from these patients during surgery and were stored at −80°C for further analysis. The droplet Digital PCR (dd-PCR) method was used to evaluate the genotype of C3orf21 in normal lung tissue and adenocarcinoma specimens. The DNA was isolated from these lung and tumor tissue homogenates, respectively, using the FastPrep-24 sample processing system (MP Biomedical, Santa Ana, California, USA), and the genotyping was performed with the PCR sequencing method using an S100-PCR Amplification Device (Bio-Rad, Samoa, USA). The assay designer’s software version 3.0 (Sequenom) was used to design primers for the polymerase chain reaction and single base extension. The primers for the C3orf21 rs2131877 genotype were:

Finally, the purified PCR products were sequenced using an ABI 3100 DNA sequencer (USA). Other tumor markers, such as carcinoembryonic antigen (CEA), carbohydrate antigen 125 (CA125), cell keratin fragments 211 (CYF211), carbohydrate antigen 199 (CA199), squamous cell antigen (SCC-Ag), and neuron enolization enzymes (NSE), were detected in the peripheral blood before surgery with a Chemiluminescent Microparticle Immunoassay in the Abbott I400 AxSYM system (Abbott, Chicago, USA). All patients were followed up until June 2016. We also performed a retrospective analysis of two hundred NSCLC patients including 145 patients with adenocarcinoma and 55 patients with squamous cell carcinoma from our previous study [26]. All of these patients were non-smokers. Among these, one hundred and three adenocarcinoma patients displayed tumor markers (CEA, CA125, CA199) (Table 3); however, only ninety-nine patients had records for the values of all markers (CEA, CA125, CA199, SCC-Ag, CYF211 and NSE) (Table 4).

The RNA was isolated from MSTO-211H cells either ablated for or overexpressing the C3orf21 gene using an RNAiso Plus (TaKaRa, Dalian, China) kit. To generate cDNA, the isolated RNA (1 μg) was reverse transcribed using an RT transcription kit (TaKaRa, Dalian, China) with oligo (dT18) primer. Next, the quantitative PCR was conducted using a real time qPCR (Bio-Rad, USA) machine with the following specific primers synthesized by Sangon Biotech (Shanghai, China): 5′-CTGGCCTTCAGGACCTAC-3′ and 5′-CTGCCTGTAACCTCAAAGA-3′. The quantitative PCR reaction mix consisted of 20 μl total volumes including 10 μl SYBR® Premix Ex Taq (TaRaKa), 0.8 μl of each primer (10 μM), 0.2 μl cDNA, and 6.4 μl of ddH2O. The following PCR amplification conditions were used: denaturation at 95°C for 30 seconds, then 40 cycles of 95°C for 5 seconds and 60°C for 20 seconds, and a final cycle of 72°C for 1 minute. For all PCR analyses experiments, the GAPDH expression served as a loading control.

Cells were collected and lysed on ice for 30 min in RIPA lysis buffer (cell-land, Hangzhou, China). Protein fractions were collected by centrifugation at 15,000 g at 4°C for 10 min, were subjected to 10% SDS-PAGE and transferred to PVDF membranes (Bio-Rad, USA). After blocking with 5% BSA, the membranes were incubated with specific antibodies overnight at 4°C. The following day, a secondary antibody was added, and the proteins were visualized using an enhanced chemiluminescence detection system as recommended by the manufacturer Bio-Rad Laboratories, Inc.

The 1 × 106 cells (MSTO-211H) per ml in a logarithmic growth phase were incubated with 10 μm CFSE staining solution at 37°C for 30 min. These cells were later washed twice with PBS and then cultured in a humidified incubator with 5% CO2 at 37°C in six-well plates. After 72 hr, the cells were collected and analyzed for cell proliferation using flow cytometry detection technology.

Following incubation for 24 hrs, MSTO-211H cells were incubated with 5 μl of FITC-conjugated Annexin V dye and 10 μl of PI staining reagent in the dark for 5 min at room temperature. These cells were then immediately analyzed using flow cytometry.

To assess the cell migration of MSTO-211H cells, we performed a real time cell analysis. First, 165 μl serum containing culture medium was added to the lower chamber of the cell invasion and migration (CIM) plate, while 30 ul of serum-free medium was added to the upper chamber, and the plate was incubated at 37°C and 5% CO2 for 1 hr to balance the baseline. Next, 100 μl of the logarithmic phase cells (concentration 4 × 105 per ml) in serum-free medium were added into the CIM upper chamber, and the cell migration was detected every 15 min. The real-time cell migration data were collected for 72 hrs.

The flow cytometry data were analyzed using FlowJo 7.6 software. The results were analyzed using the statistical software GraphPad Prism 5.0 and presented as the means ± standard error for continuous variables. An analysis of variance and the following independent t tests were used for all comparisons. Correlations between two variables were estimated using Spearman’s rank sum test, and a P value of < 0.05 was considered statistically significant.

In summary, we demonstrated that the C3orf21 gene T/C+C/C genotype at the rs 2131877 locus may act as a susceptibility marker for lung adenocarcinomas with a higher degree of malignance. Importantly, C3orf21 mRNA expression appears to be associated with lung cancer risk, and its ablation promoted lung cancer MSTO-211H cell proliferation, inhibited apoptosis and accelerated cell migration.