Fat flap transplantation is frequently performed in patients suffering from soft tissue defects resulting from disease or trauma. This study explored the feasibility of constructing vascularized fat flaps using rabbit adipose-derived stem cells (rASCs) and collagen scaffolds in a rabbit model. We evaluated rASCs proliferation, paracrine function, adipogenesis, vascularization, and CD54 expression, with or without HIF-1α transfection in vitro and in vivo. We observed that adipogenic differentiation potential was greater in rASCs with high CD54 expression (CD54+rASCs) than in those with low expression (CD54–rASCs), both in vitro and in vivo. HIF-1α overexpression not only augmented this effect, but also enhanced cell proliferation and paracrine function in vitro. We also demonstrated that HIF-1α-transfected CD54+rASCs showed enhanced paracrine function and adipogenic capacity, and that paracrine function increases expression of angiogenesis-related markers. Thus, CD54+rASCs overexpressing HIF-1α enhanced large volume vascularized fat flap regeneration in rabbits, suggesting CD54 may be an ideal candidate marker for ASCs adipogenic differentiation.

Homogeneous rASCs growing in a monolayer with a spindle-shaped morphology were observed by phase-contrast microscopy after primary culture for 7–10 d, reaching 80–90% confluence (Figure 1). These rASCs proliferated rapidly. During subculture, P3 rASCs reached the same level of confluence within 3–4 d with a 1:3 split ratio (Figure 1). This demonstrated that rASCs resemble other ASCs in terms of morphology and proliferative capacity. rASCs expressed the mesenchymal surface markers CD29, CD44, CD54, CD73, CD90, CD105, and HLA-ABC, as determined by flow cytometry (Table 1). In contrast, < 7% of rASCs expressed the hematopoietic markers CD31, CD34, and CD45, and the histocompatibility antigen class II HLA-DR-DP-DQ. After DiI labeling, rASCs cytoplasms showed red fluorescence (Figure 1). 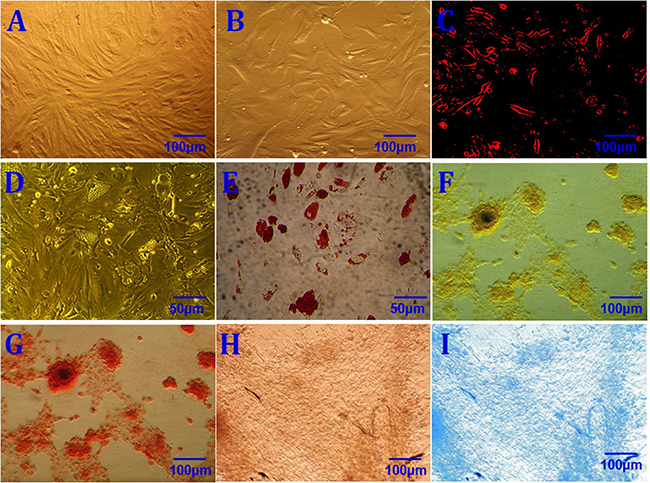 Effect of HIF-1α transfection on rASCs proliferation in vitro 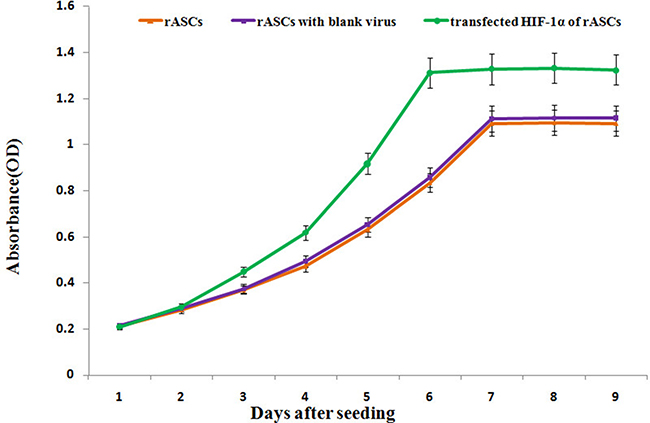 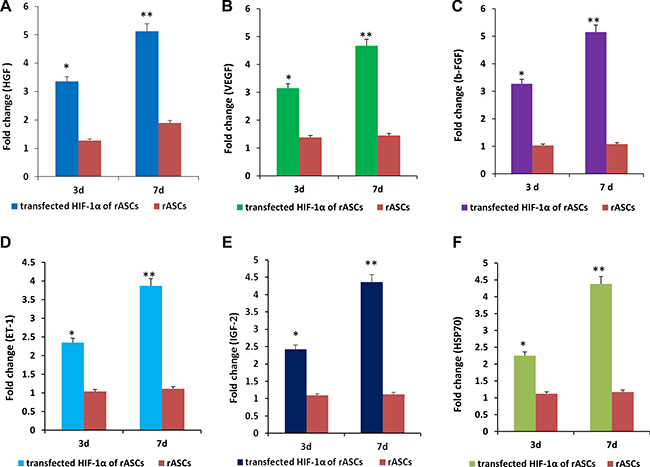 Effect of HIF-1α on rASCs adipogenic differentiation in vitro

The four rASCs groups exhibited different adipogenic potentials in vitro. CD54+rASCs contained more large oil red O-positive lipid droplets in their cytoplasm, and HIF-1α transfection augmented this effect. However, CD54-rASCs transfected with HIF-1α (group C) and untransfected CD54-rASCs contained fewer oil red O-positive lipid droplets (Figure 4). There were differences between groups A and B, groups A and C, groups A and D, groups B and C, groups B and D, and groups C and D in adipocyte density and lipid concentration (Figure 4). 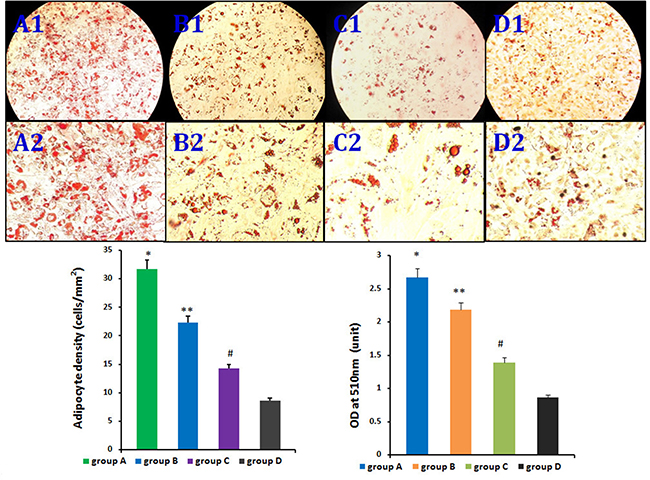 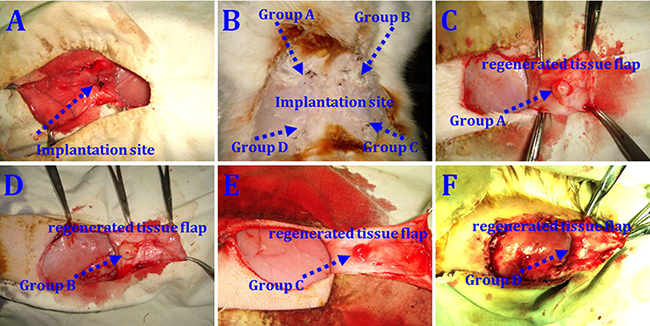 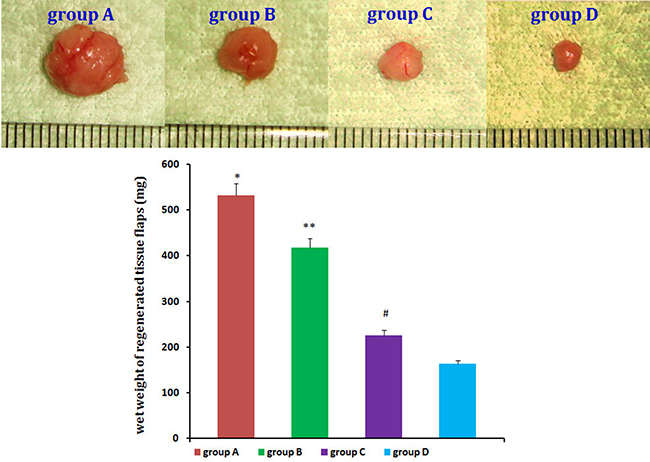 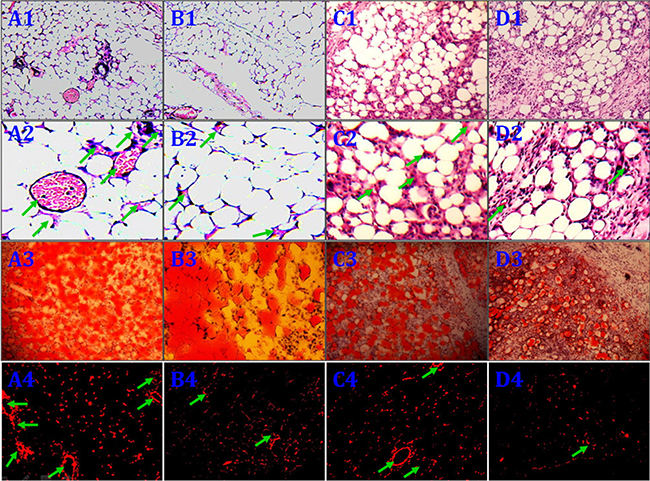 Figure 8: Quantitative measurement of adipogenesis and angiogenesis. Adipocyte density and intracellular lipid content were higher in groups (B) and (C) than in the control group, and HIF-1α transfection (A) augmented this effect (B–C). Histological evaluation of 10 fields/section taken from the center of the mature adipose tissue showed that the MVD was much higher in group A than in the other three groups, and MVD in group C was much higher than that in group B and A, as determined by the t-test C. *P < 0.01, **P < 0.01, #P < 0.01.

Red-fluorescent cells were observed in regenerated fat flaps by fluorescence microscopy, indicating that these mature adipocytes had differentiated from DiI-labeled rASCs (Figure 7A4–7D4). Adipogenesis and lipid vacuole formation in neogenetic mature adipose tissue sections were assessed by oil red O staining. CD54+rASCs (group B) contained more large oil red O-positive lipid droplets in their cytoplasm, and transfection with HIF-1α (group A) augmented this effect. CD54-rASCs transfected with HIF-1α (group C) and CD54-rASCs contained fewer oil red O-positive lipid droplets (Figure 7). There were differences between groups A and B, groups A and C, groups A and D, groups B and C, groups B and D, and groups C and D in adipocyte density and lipid concentration (Figure 8). 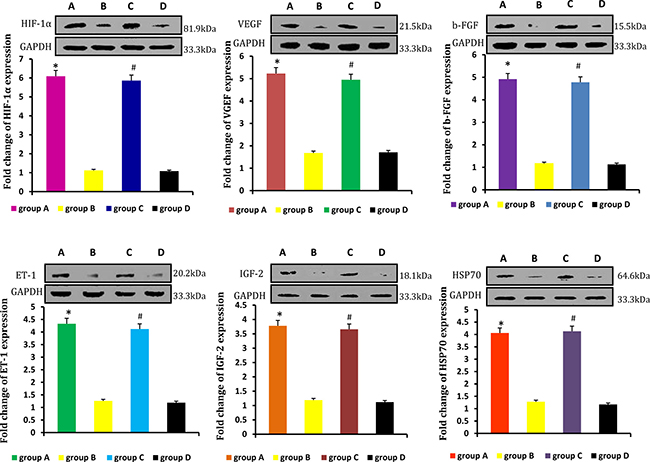 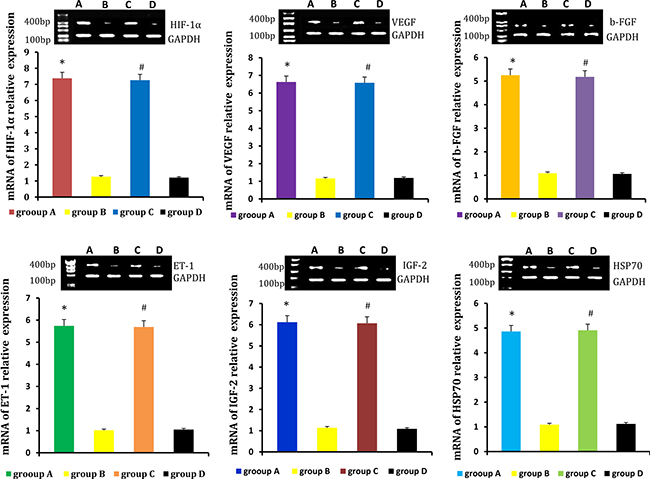 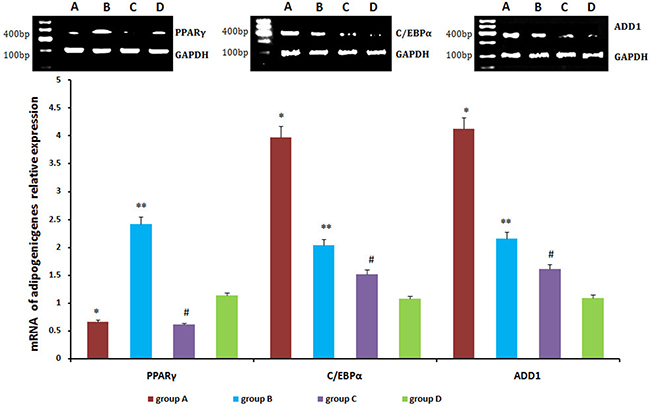 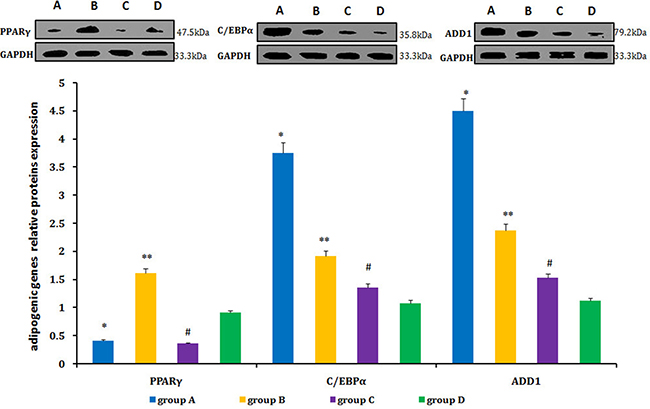 HIF is a transcription factor induced under hypoxic conditions. HIF-1α migrates into the nucleus to form a stable heterodimer with HIF-1β or binds to histone acetylation enzymes to avoid degradation [25]. HIF-1α induces VEGF, platelet-derived growth factor (PDGF), and b-FGF expression, thereby enhancing angiogenesis and improving oxygenation of the environment [26–31]. However, the effects of HIF-1α in ASCs remained unclear. Some studies showed that HIF-1α is involved in cell proliferation during hypoxia [32–34].

This study assessed the adipogenic capacity of rASCs based on the CD54 marker, and found that rASCs with high CD54 expression exhibited stronger adipogenic differentiation potential in vitro. We examined rASCs proliferation and paracrine function with or without HIF-1α transfection in vitro and in vivo, and found that HGF, VEGF, ET-1, b-FGF, IGF-2, and HSP70 were upregulated in transfected rASCs. These results showed for the first time that rASCs modified by HIF-1α exhibit enhanced proliferation and paracrine function. Furthermore, macroscopic and histopathological findings suggested that CD54+rASCs exhibited greater adipogenic differentiation potential in vivo than CD54-rASCs, and transfecting CD54+rASCs with HIF-1α augmented this effect. HIF-1α gene modification or hypoxia preconditioning accelerated rASCs angiogenic potential, which was consistent with previous reports [33, 35].

PPARγ, C/EBPα, ADD1, and growth factors/cytokines are closely involved in adipogenic differentiation [19, 36–37]. PPARγ and C/EBPα are transcription factors in different signaling pathways, and ADD1 expression can be used to represent degree of adipogenic differentiation [38–39]. In our study, C/EBPα and ADD1 levels were increased, and PPARγ levels were decreased in HIF-1α-transfected CD54+rASCs.

ASCs directly form new vascular networks by differentiating into endothelial cells [41], and paracrine functions are also involved, e.g., in the secretion of angiogenic factors, such as VEGF, ET-1, b-FGF, and PDGF [42–43]. Our results showed that paracrine function and MVD were both increased in fat flaps containing modified rASCs. Angiogenesis is not the only process affected by paracrine signals; previous studies demonstrated that paracrine signals from MSCs promote cell proliferation, migration, and secretion independently of promoting angiogenesis [44]. Moreover, growth factors are necessary for efficient differentiation of ASCs into adipocytes [36]. Since HIF-1α-transfected rASCs not only exhibited enhanced proliferation and paracrine function, but also facilitated vascularized fat flap regeneration, HIF-1α may promote early transplant neovascularization and enhanced rASCs adipogenic differentiation (Figure 13). 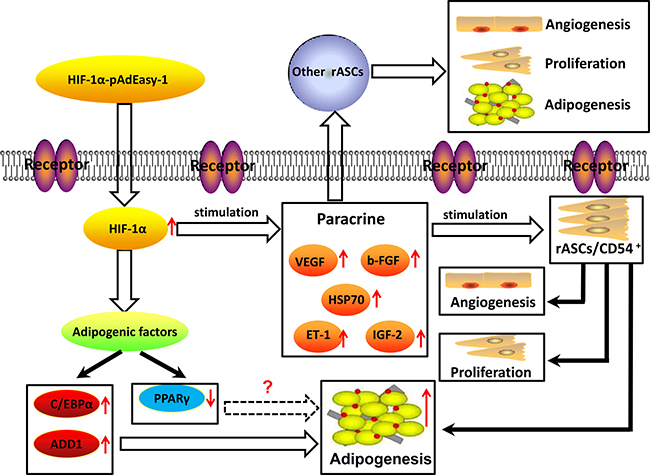 HIF-1α was introduced into a pAdEasy-1 adenoviral vector system. The virus was packaged, and titer was assessed. P5 CD54+ and CD54- rASCs were infected with the HIF-1α-encoding adenovirus at 90% confluence, as determined by fluorescence microscopy. Prior to infection, cells were washed with infection buffer three times and incubated at RT for 10 min. Infection was carried out with a multiplicity of infection of 50 pfu/cell in 1 ml of infection buffer at RT for 60 min. After infection, rASCs were incubated at 37°C with 5% CO2 in a humidified atmosphere. Three d later, rASCs were subcultured for use in the following experiments.

Influence of HIF-1α on rASCs proliferation in vitro

Paracrine function of rASCs after transfected HIF-1α in vitro

Influence of HIF-1α on rASCs adipogenic differentiation in vitro

For adipogenesis assays, HIF-1α-transfected CD54+rASCs (group A), CD54+rASCs (group B), HIF-1α-transfected CD54-rASCs (group C), and CD54-rASCs(group D) were cultured in 6-well plates with adipogenic induction medium containing 200 μM indomethacin, 10 μM insulin, 0.5 mM 3-isobutyl-1-methylxanthine, and 1 μM dexamethasone at a seeding density of 500 cells/mm2 for up to 14 d. Adipogenic differentiation was determined by oil red O staining. Briefly, cultured cells were air dried for 30 min, and then fixed in 10% formalin for 5 min. Cells were rinsed three times with distilled water, and immersed in absolute propylene glycol for 5 min to avoid transferring water into the oil red O. Cells were stained in oil red O solution for 8 min at 60°C in an oven, rinsed with 85% propylene glycol for 5 min,. rinsed with distilled water, and then stained in Gill’s hematoxylin solution for 30 sec. Cells were thoroughly washed with running water for 3 min, rinsed twice with distilled water, and mounted with glycerin jelly or aqueous mounting medium. Upon observation of the samples, lipids appeared red and nuclei appeared pale blue. Adipocyte density for each sample was measured in 10 visual fields under the same magnification in a double-blind manner. Cell numbers were normalized to square millimeters. Lipids were extracted from cells with 100% isopropanol and gentle shaking for 5 min. Lipid concentrations were measured based on absorbance at 510 nm in triplicate for each sample.

At 12 weeks post-implantation, all transplants (i.e., neogenetic fat flaps) were excised from the muscular fasciae and weighed using a standard electronic balance. Transplants were then fixed in formalin and embedded in paraffin. Tissue sections from the center of the dissected regenerative tissue biopsy were stained with hematoxylin and eosin (H&E) using standard procedures and examined by light microscopy. MVD was assessed by counting microvessels in 10 fields of each H&E-stained slide (40× magnification; performed by two blinded reviewers).

Neogenetic fat flap tissues samples were embedded in paraffin, cut into 5-μm-thick slices, and observed by fluorescence microscopy. Cyrosections were stained with oil red O and washed twice with PBS. Adipocyte densities were measured in a double-blind manner in 10 visual fields under the same magnification. Cell numbers were normalized to square millimeters. Lipids were extracted from cells with 100% isopropanol and gentle shaking for 5 min. Lipid concentrations were measured based on absorbance at 510 nm in triplicate for each sample.

41. Volz AC, Huber B, Schwandt AM, Kluger PJ. EGF and hydrocortisone as critical factors for the co-culture of adipogenic differentiated ASCs and endothelial cells. Differentiation. 2017; 95:21–30.