Gynecologic malignancies are a major cause of cancer-related death in women worldwide. Cervical, endometrial, and ovarian cancer are the second, fourth, and fifth most common types of cancer, respectively, among North American women [1]. The exact molecular mechanisms underlying gynecologic malignancies are still poorly understood. However, as with other complex diseases, the influence of genetic factors, alone or in combination with local environmental factors, likely contributes to their development and progression. Especially, gene polymorphisms have been suggested as an important cause of the disparities in individual genetic susceptibility to gynecologic malignancies.

Glutathione S-transferases (GSTs) are a superfamily of phase II enzymes that are expressed in many tissues and are responsible for the metabolism of various xenobiotics and carcinogens by catalyzing the conjugation of glutathione to electrophilic compounds. They play a vital role in protecting the cells from oxidative damage and in modulating the induction of other enzymes and proteins in response to DNA damage; therefore, they are important for maintaining genomic integrity [2]. Numerous polymorphisms have been reported to occur in the genes encoding GSTs, which may reduce their efficiency and increase the risk of certain cancers. Accordingly, GSTs have been widely explored as risk biomarkers for various cancers, including gynecological cancers. Among these enzymes, the GST class π enzyme encoded by the GSTP1 gene is overexpressed in various tumor types and is a major enzyme involved in the inactivation of cigarette smoke carcinogens and other toxic constituents. A single nucleotide polymorphism in the GSTP1 gene at codon 105 (Ile105Val), which causes an amino acid substitution of isoleucine (Ile) by valine (Val), results in decreased enzymatic activity and lowers the ability to metabolize certain xenobiotics and carcinogens. Biochemical studies have indicated that the GSTP1/Val105 variant is 2-3 times less stable than the Ile105 variant [3] and may be associated with the risk of gynecological cancers.

In the past decade, several case-control studies about the relationship between the GSTP1 Ile105Val polymorphism and gynecological cancer susceptibility have been conducted. However, the results are still inconclusive, owing to the relatively small sample sizes of the studies, resulting in limited power to estimate the overall effects. Meta-analyses are powerful tools for summarizing inconclusive results from individual studies. Therefore, we performed the present meta-analysis using data from 10 previously published case-control studies [4-13] to more precisely assess the association between the GSTP1 Ile105Val polymorphism and gynecological cancer risk.

As shown in Figure 1, 60 potentially eligible studies were retrieved through the initial search. After screening the articles as described above, 50 articles failed to meet the inclusion criteria and were hence excluded. Thus, 10 eligible articles, including 1339 cases and 2884 controls, were finally included in this meta-analysis [4-13]. The main characteristics of these studies are summarized in Table 1. The included studies included 4, 4, and 2 studies on ovarian cancer, cervical cancer, and endometrial cancer, respectively. Four studies each were conducted specifically in Asian and Caucasian populations. Data on the smoking status and GSTP1 genotypes were available in 2 studies. The minor allele frequency of the G allele among the controls in these 10 studies ranged from 0.04 to 0.38.

Table 1: Main characteristics of the studies included in this meta-analysis 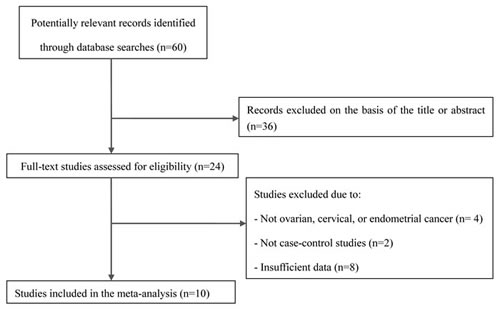 Figure 1: Flow chart of the selection of studies included in the current meta-analysis. 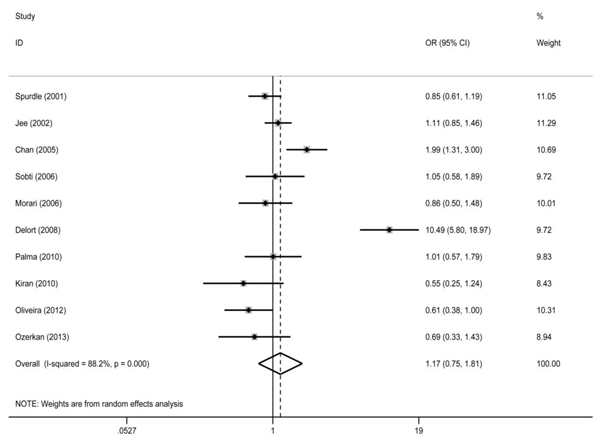 Figure 2: Forest plot for the association between the glutathione S-transferase P1 (GSTP1) Ile105Val polymorphism and gynecologic cancer risk for the AG/GG genotype compared with the AA genotype. OR, odds ratio; CI, confidence interval. 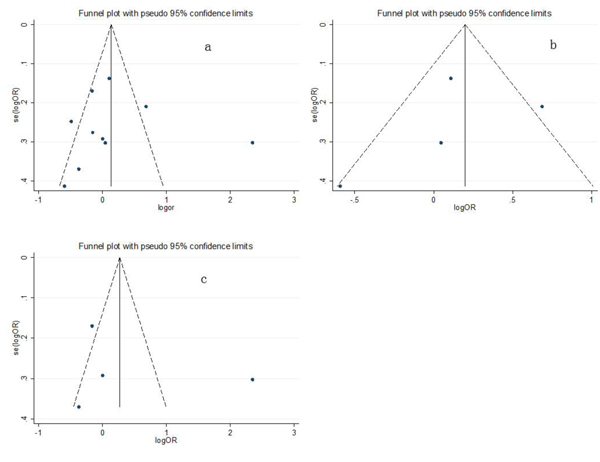 Figure 3: Funnel plots of the associations between the glutathione S-transferase P1 (GSTP1) Ile105Val polymorphism and gynecologic cancer risk for the AG/GG genotype compared with the AA genotype in (a) the overall population, (b) Asian subjects, and (c) Caucasian subjects.

As has been well established, tobacco smoking is a significant risk factor for many cancer types [18]. GSTP1 has been hypothesized to be involved in metabolizing the various carcinogens present in cigarette smoke, including, among others, polycyclic aromatic hydrocarbons, and a lack of GSTP1 activity might hence ultimately increase the burden of these carcinogens. Interestingly, in our study, no interaction between GSTP1 and gynecological cancer was detected in either ever-smokers or non-smokers, suggesting that cigarette smoking might not significantly modify the association between the GSTP1 Ile105Val polymorphism and gynecological cancer susceptibility. However, the results should be interpreted with caution due to the relatively small sample size in the subgroup analysis according to smoking status.

Although our meta-analysis is robust, several limitations should be acknowledged. First, in the subgroup analyses by cancer type, ethnicity, and smoking status, the relatively small sample sizes may have led to insufficient power to detect the real relationships. Second, the data of each included study were based on unadjusted estimates, and a more precise analysis could have been performed if the original data were available. Third, gene-gene interactions might play an important role in the development of gynecological cancers. However, we could not carry out analyses on these interactions due to insufficient data.

In summary, the results of the present meta-analysis suggest that the GSTP1 Ile105Val polymorphism is not associated with the development of gynecological cancer. Further well-designed studies with larger sample sizes are required to confirm this conclusion.

Systematic searches were performed in the PubMed and Elsevier databases (until December 2015) using combinations of the following search terms: ‘GSTP1,’ ‘glutathione S-transferase P1,’ ‘polymorphism,’ ‘gynecologic malignancies,’ ‘ovarian cancer,’ ‘cervical cancer,’ and ‘endometrial cancer.’ Moreover, additional eligible articles were identified through scanning of the references cited in the retrieved articles. We assessed the titles and abstracts of the retrieved articles to exclude any irrelevant studies. Additionally, the remaining full-text articles were thoroughly scrutinized to determine whether they were suitable for the final analysis.

The inclusion criteria were as follows: (1) case-control studies that were conducted to assess the association between the GSTP1 Ile105Val polymorphism and gynecological cancer risk and (2) studies with sufficient data for estimating odds ratios (ORs) and their 95% confidence intervals (CIs). Gynecologic malignancies were defined as cervical cancer, endometrial cancer, and ovarian cancer. In cases of multiple publications using the same or overlapping data, we chose the one with the largest number of subjects. The exclusion criteria were as follows: (1) reviews and comments; (2) studies with duplicate data; and (3) articles with no available information on the genotype frequency.

The data were obtained according to a standardized data extraction form. In order to minimize the risk of bias, two investigators extracted the following data from each study independently: the first author’s name, year of publication, country, sources of controls (hospital-based or population-based), ethnicity (Asian or Caucasian), cancer type (ovarian, cervical, or endometrial cancer), smoking status (smokers or nonsmokers), numbers of different genotypes in the case and control groups (AA, AG, and GG genotypes), the Hardy-Weinberg equilibrium of the controls, and the minor allele frequency in the controls.

The association between the GSTP1 Ile105Val polymorphism and the risk of gynecological cancer was estimated by using ORs with their corresponding 95% CIs. Pooled ORs were obtained for comparisons of heterozygotes (GA vs. AA), homozygotes (GG vs. AA), the dominant model (AG/GG vs. AA), and the recessive model (GG vs. AA/AG). Moreover, the studies were stratified and analyzed by ethnicity, cancer type, and smoking status. The Cochrane Q statistics test and I-squared (I2) metric were used to test heterogeneity. When the I2 for heterogeneity was >50%, the fixed effects model was used. Otherwise, the random effects model was applied (DerSimonian and Laird method) [19]. Funnel plots and Egger’s linear regression test [20] were used to identify potential publication bias. All statistical analyses were performed using STATA 11.0 software (STATA Corp., College Station, TX, USA), with two-sided P values < 0.05 considered significant.