Results: The incidence density rate of osteoporosis was 12.5 per 1000 person-years in the HSCT group, which was significantly higher than that in the non-HSCT group (5.65 per 1000 person-years) after adjustment for associated factors and consideration of competing risk factors (adjusted subhazard ratio, 1.48; 95% confidence interval, 1.06–2.07). The incidence density rate of fracture was 4.89 per 1000 person-years in the HSCT group, and the risk of fracture was 1.40 times higher in the HSCT group than in the non-HSCT group (95% confidence interval, 0.83–2.40). The vertebra was the most common site of fracture after HSCT (68.4%). The risk of osteoporosis and fracture significantly increased in post-HSCT patients with both hematological malignancies and solid tumors. Both autologous and allogeneic HSCTs increased the risk of osteoporosis, whereas only autologous HSCT recipients had an increased risk of fracture.

Materials and Methods: This nationwide retrospective cohort study analyzed data from Taiwan’s National Health Insurance Research Database. We identified an HSCT group comprising 1040 cancer patients who underwent HSCT during 2000–2008 and a non-HSCT group comprising 4160 propensity score-matched cancer patients who did not undergo HSCT. All patients were followed up until the occurrence of osteoporosis; fracture; December 31, 2011; or withdrawal from the insurance program.

Conclusions: HSCT recipients have an increased risk of osteoporosis.

Despite substantial progress in the HSCT technique and the subsequent care, many complications including mucositis, acute and chronic graft-versus-host disease, infections, hepatic veno-occlusive disease, lung injury, and secondary cancer are prevalent after the transplantation [2]. Bone loss is a common complication following HSCT [3–7]. The pathogenesis of osteoporosis and the subsequent fracture involves multiple factors including the transplant procedure, secondary hypogonadism, chemotherapy, radiotherapy, immunosuppressive therapies, reduced mobility and growth factors, and abnormal metabolism and absorption of calcium and vitamin D because of kidney, liver, and bowel dysfunctions [3, 8].

Several studies have reported bone loss after HSCT [9–15]. In contrast to data on the short-term effects of bone loss, data on the long-term effects of bone loss after HSCT are limited [7, 9, 13–15]. In Taiwan, HSCT has been a common therapy for hematopoietic diseases and malignancies since 1983 [16]. Approximately 200 transplantations have been performed annually in recent years, and more than 2200 patients have undergone HSCT until 2008 [16]. The present study analyzed the incidence and risk of osteoporosis and fracture in cancer patients who underwent HSCT by using Taiwan’s National Health Insurance Research Database (NHIRD).

This study included 1040 cancer patients who underwent HSCT (HSCT group) and 4160 cancer patients who did not undergo HSCT (non-HSCT group; Table 1). The mean age of patients in the HSCT group was 34.8 years (standard deviation, 16.0 years); this group had male predominance (60.8%). After propensity score matching, both the HSCT and non-HSCT groups had similar sex, age, comorbidities, and cancer types (all standardized differences < 0.1).

Table 1: Demographic factors and comorbidities of enrolled patients in this study

Table 2: Incidence density rates and hazard ratios of osteoporosis and fracture in the HSCT group comparing with the non-HSCT group

Table 3: Incidence density rates and hazard ratios of osteoporosis and fracture in patients with and without HSCT stratified by sex, age, comorbidity, and underlying cancers 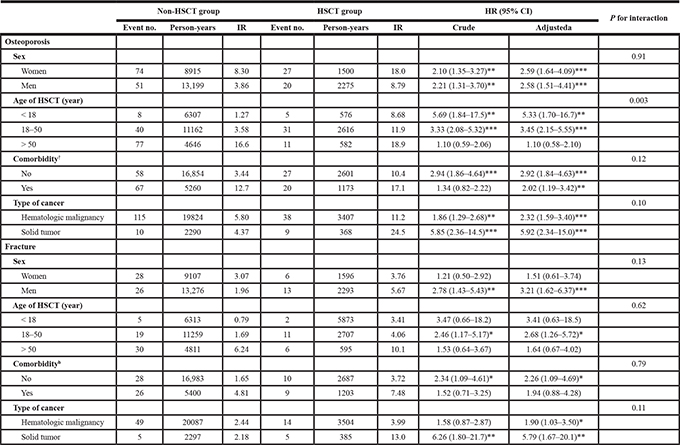 Table 4: Incidence density rates and hazard ratios for different subtypes of pathologic fracture in the HSCT group comparing with the non-HSCT group

Table 5: Incidence density rates and hazard ratios of osteoporosis and fracture in different types of transplants

In our study, the HSCT group had a 2.53 times higher risk of osteoporosis and a 2.28 times higher risk of fracture than did the non-HSCT group after adjustment for sex, age, comorbidity, and cancer type. After considering the competing risk factor for death, the risk of osteoporosis was significantly higher in the HSCT group (SHR, 1.48; 95% CI, 1.06–2.07); however, the effect of HSCT on fracture was not significant (SHR, 1.40; 95% CI, 0.83–2.40). Several studies have reported the effect of HSCT on both osteoporosis and fracture [9–15]. For example, a large-scale study by Pundole et al. [7] reported that HSCT recipients were approximately 7–9 times more likely to develop fracture than the general population in the United States of America. The nonsignificant effect of HSCT on fracture in the present study may be due to a small number of fractures.

In the current study, the HSCT group had a higher risk of fracture than did the non-HSCT group irrespective of the presence of comorbidity. However, statistical significance was observed only in patients without comorbidity (adjusted HR, 2.26; 95% CI, 1.09–4.69) and not in those with comorbidity (adjusted HR, 1.94; 95% CI, 0.88–4.28). A small case number of fractures in the subgroup may be a potential bias. Another possible interpretation for this phenomenon is the secondary effects of the comorbidity-based treatment. For example, corticosteroid treatment in chronic obstructive pulmonary disease can result in bone loss [31].

The major strengths of this study include the large-scale nationwide design, comprehensive demographic data, and the long follow-up duration. However, the study has several limitations. First, the measurement of BMD through dual-energy X-ray absorptiometry is the gold standard for diagnosis of osteoporosis [36]. The NHIRD does not contain data on the BMD Z-scores or T-scores. Therefore, we could not confirm whether the diagnosis met BMD Z-scores or T-scores defined for osteoporosis. In the current study, the diagnoses of osteoporosis were based on the International Classification of Diseases, Ninth Revision, Clinical Modification (ICD-9-CM) codes, which were judged and determined by clinical physicians according to clinical standards. Moreover, a committee in the National Health Insurance comprising medical reimbursement specialists regularly reviews the charts and assesses the accuracy of these claims files. Inaccurate coding of diseases would result in no reimbursement, and the institutions would be subjected to fines. Therefore, the diagnoses and codes for osteoporosis used in this study should be correct and reliable. Second, information on several factors for osteoporosis and osteoporotic fractures, such as smoking, body mass index, calcium intake, diet supplement, physical activity, socioeconomic status, and some treatments, are unavailable in the NHIRD. These factors could have biased the study results. Third, some infections were significantly associated with osteoporosis and fracture. However, information on the laboratory confirmation of infections was unavailable in the NHIRD. Fourth, the HSCT population could have been followed up more frequently than the control group and hence might have a higher rate of osteoporosis diagnosis. This could attenuate the strength of the association between osteoporosis and HSCT. Finally, the statistical evidence derived from a retrospective study is generally weaker than that from randomized controlled trials.

In conclusion, our study results revealed a significant risk of osteoporosis following HSCT in cancer patients. Both osteoporosis and subsequent fracture largely affect the quality of life and increase morbidity and mortality. Thus, HSCT recipients should be considered at a high risk of osteoporosis, and regular follow-up and preventive measures against these complications are suggested for all HSCT recipients of cancer patients.

Taiwan’s National Health Insurance program, established in 1995, is a population-based mandatory health insurance program, covering approximately 99.9% of the Taiwanese population. In this study, we used datasets from the Registry for Catastrophic Illness Patient Database of the NHIRD. Under the National Health Insurance program, a catastrophic illness certificate is provided for patients with diseases such as cancer, end-stage renal disease, and organ transplantation. The Catastrophic Illness Patient Database is highly accurate because the certification is reviewed by relevant experts after scrupulous verification of medical records, imaging studies, and pathological findings. This database contains outpatient and inpatient information such as demographic data, visit dates, and ICD-9-CM codes of the diagnosis and procedures. For privacy reasons, all identifiable patient information in the NHIRD is encrypted before releasing it for research purposes.

The NHIRD encrypts patient personal information to protect privacy and provides researchers with anonymous identification numbers associated with relevant claims information. Therefore, patient consent is not required to access the NHIRD. This study was approved to fulfill the condition for exemption by the Institutional Review Board of China Medical University (CMUH104-REC2-115-CR1). The institutional review board also specifically waived the consent requirement.

We compared sex, age, and comorbidity between the HSCT and non-HSCT groups by using standardized differences [24]. A standardized difference value < 0.1 indicates a negligible difference in means between the two groups. The incidence density rates of osteoporosis and fracture, stratified by sex, age, and comorbidity, were calculated in both groups. The incidence density rate (per 1000 person-years) of osteoporosis or fracture was defined as the number of incident osteoporosis or fracture divided by the number of person-years. The number of person-years was calculated by summing the number of days from the index date to the date of endpoint. Furthermore, a multivariate Cox proportional hazards regression analysis was performed for measuring the adjusted HRs and 95% CIs of osteoporosis and fracture; these data were compared between the groups after adjustment for sex, age, comorbidity, and cancer type. We used an extended Cox proportional hazards model with the Lunn-McNeil approach (a modified Cox proportional hazards model that considers competing risks) to evaluate the association between HSCT and the risk of osteoporosis/fracture [25]. Finally, the interactions of HSCT with sex, age, and comorbidity status were further examined by adding their product terms into the full model for the evaluation of both osteoporosis and fracture. All analyses were conducted using the SAS statistical software (version 9.4 for Windows; SAS Institute, Inc., Cary, NC, USA), and two-tailed P < 0.05 was considered significant.

All authors report no conflicts of interest.