Extranodal natural killer/T cell lymphoma (ENKTL) is a highly aggressive non-Hodgkin lymphoma, distinguished from other subtypes on the basis of its unique characteristics, such as predominant involvement of the nasal cavity and nasopharynx, high prevalence in East Asia and South America, and relationship to Epstein-Barr virus infection. Based on published literature, the treatment outcomes of ENKTL are generally poor, and vary widely [1–3]. Five-year overall survival (OS) rates in large cohort studies range from 30–86%, with most studies demonstrating the 5-year OS of < 50%. Thus, investigation of optimal therapeutic targets and prognostic factors for ENKTL is still warranted.

Importantly, two major prognostic models have been utilized for NK/T-cell lymphoma: The International Prognostic Index (IPI) and the Korean Prognostic Index (KPI). IPI has not gained widespread acceptance for ENKTL prognosis, as 60% of the ENKTL patients are grouped into low IPI risk categories (score, 0–1). However, the KPI model appears to be more useful for predicting ENKTL prognosis [4–6], as stage III or IV patients are included in the KPI model. However, some patients in the low KPI risk group still have poor clinical outcomes [7], which indicate that the scoring systems based on both these models should be further modified.

A growing body of evidence has shown the involvement of inflammation in occurrence and development of cancer, including ENKTL [8–10]. The microenvironment surrounding the tumor encompasses both tumor and host-derived cytokines, inflammatory cytokines, and infiltrating immune cells. Among the different cell types involved in tumor responses, lymphocytes basically accelerate antitumor immune response, and their presence closely relates with higher cytotoxic treatment and a more favorable prognosis [11]. In recent years, higher levels of serum β2-microglobulin (β2-MG) and lactate dehydrogenase (LDH) prior to treatment have been shown to correlate with poor prognosis in patients with malignancy [12–16].

β2-MG constitutes the light chain subunit of major histocompatibility complex (MHC) class I antigens and is present on the surface of all nucleated cells. Similarly LDH has been shown to be an indirect marker of hypoxia and neo-angiogenesis, which stimulates the proliferation, metabolism, and metastasis of tumor cells [17]. It has been proposed that combining multiple inflammatory marker levels can incrementally improve the prognostic value of well-established inflammation-based scoring systems [18]. To the best of our knowledge, there have been no studies assessing the prognostic value of pretreatment β2-MG to lymphocytes ratio (βLRI) and LDH to lymphocytes ratio (LLRI) in predicting survival of ENKTL patients. Thus, in this study we sought to evaluate the prognostic value of βLRI and LLRI in ENKTL patients.

Our study recruited 211 patients, including 65 with limited stage IE, 94 with paranasal extension stage IE and 52 with stage IIE. Among them, 151 patients were males, and 60 were females with a median age of 42 years (range 11–85 years). A total of 102 patients (48.3%) displayed B symptoms, and the majority (96.2%) showed Eastern Cooperative Oncology Group score (ECOG) of 0–1. LDH levels were elevated in 56 patients (26.5%). The majority of patients (92.4%, 72%) were grouped into low or low-intermediate risk categories according to IPI and KPI, respectively. The baseline characteristics of these patients are shown in Table 1. 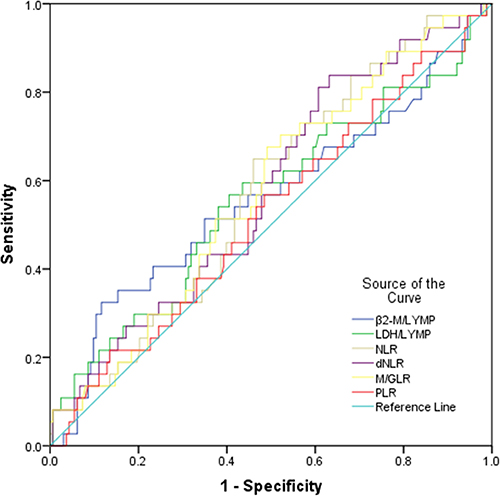 We further investigated the relationship between pretreatment βLRI & LLRI and the clinical variables of ENKTL patients. Our data indicated that both of them correlated with paranasal extension (p = 0.023, p = 0.003) and KPI > 1 (p = 0.010, p = 0.002) as shown in Table 2. Moreover, βLRI also correlated with IPI > 1 (p = 0.002) and recurrence (p = 0.014), while LLRI correlated with B symptoms (p < 0.001). However, we did not observe any significant correlation between pretreatment βLRI & LLRI and other clinical or pathological parameters such as age, gender, Ann Arbor Stage, ECOG, and lymph nodes infiltration (all p > 0.05), as shown in Table 2.

Table 2: Correlation of βLRI and LLRI scores with clinical and pathological variables

Table 3: Univariate analysis based identification of prognostic factors for PFS and OS in ENKTL patients

Table 4: Multivariate analysis based identification of prognostic factors for PFS and OS in ENKTL patients

Development of a novel prognostic model

Further we also sought to develop a novel prognostic model, based on the data from measurement of three variables (Ann Arbor stage, βLRI, and LLRI) in a cohort of 199 patients. The following criterion was used to develop this model: a score 0 indicated no adverse factors, while a score of 1, 2 or 3 represented one, two or three adverse factors, respectively. Based on this model, we observed that score 0 corresponded with 90% OS, whereas a score of 1, 2 or 3 indicated 83.5%, 63.9% and 0% OS, respectively. This novel prognostic model revealed the ability to discriminate outcomes between four groups of ENKTL patients (p < 0.001), as shown in Figure 2. 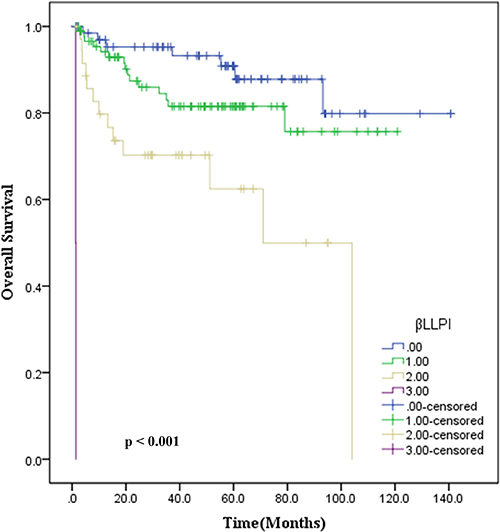 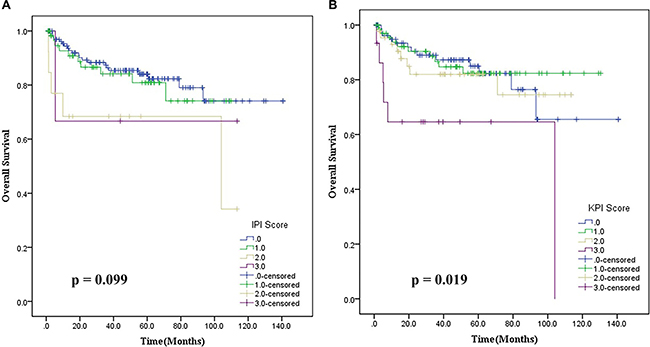 Based on the assumption that high LDH, β2-MG and low lymphocyte counts may be associated with shorter survival in patients [10, 19–21], we studied the utility of βLRI and LLRI as a panel of prognostic biomarkers for ENKTL patients. Two recent studies have indicated that elevated aspartate aminotransferase (AST) to lymphocyte ratio index (ALRI) and AST to platelet ratio index (APRI) were associated with a poor prognosis in hepatocellular carcinoma patients [22–23]. However, there were no studies evaluating the prognostic value of βLRI and LLRI in patients with ENKTL, and thus, we focused on analyzing the role of pretreatment βLRI and LLRI in ENKTL prognosis.

We first identified the cut-off value of the inflammation-based prognostic scores according to ROC curve analysis, and a score of 4.87 and 128.44 appeared to be the optimal cut-off value for βLRI and LLRI with a maximum joint sensitivity and specificity. Although ROC-based cut-off optimization for dNLR and M/GLR enabled the stratification of ENKTL patients into high and low risk groups by univariate analysis, βLRI-based stratification was more optimal. Notably, βLRI cut-off determined by our analysis defined a relatively small subset of patients (15%) as high risk, and this subset of patients was associated with poor outcome. Furthermore, βLRI and LLRI retained their prognostic value on OS in multivariate analysis (p < 0.001 and p = 0.006 respectively). These observations led us to design a novel inflammatory marker-based prognostic model with three adverse factors, Ann Arbor Stage, βLRI and LLRI. The novel prognostic model was able to identify four categories of patients with significantly different prognoses (p < 0.001).

To further validate the valuable clinical practice of our model, we compared the new model with existing systems. The IPI failed to distinguish the outcomes of ENKTL patients, which may be partly accounted for the uneven distribution of patients within risk groups and inefficiency to distinguish between low-risk and low-intermediate-risk groups [24]. Compared to IPI, the KPI displayed a homogenous patient distribution, and had the ability to discriminate low and high-risk groups. However, as reported previously, it failed to separate patients in low-risk group [7]. Thus neither IPI nor KPI were suitable to predict prognosis for early stage ENKTL patients, as the majority of these patients were categorized as low or low-intermediate risk groups. However, our prognostic model displayed superior predictive ability for these patients.

In conclusion, our study clearly established that pretreatment βLRI and LLRI seems to be independent prognostic factor candidates for ENKTL patients, and our novel βLRI and LLRI based model had the ability to stratify patients into four groups with a higher prognostic discrimination, in comparison to IPI or KPI. However, future prospective studies are required to further validate these results.

We recruited 211 previously untreated ENKTL patients, who were histologically diagnosed according to 2008 World Health Organization classification, and staged IE/IIE, according to Ann Arbor system in Cancer Hospital of Academy of Medical Sciences (CAMS) & Peking Union Medical College (PUMC) between January 2003 and December 2015. The patients’ characteristics including age, gender, ECOG score, B symptoms, white blood cell, lymphocytes, monocyte, neutrophil, platelet and levels of serum lactate dehydrogenase (LDH) and beta2-microglobin (β2-MG), were collected for analysis. In addition, computed tomography (CT) and magnetic resonance imaging (MRI) of the head and neck, CT of the chest, abdomen, & pelvis, along with bone marrow examination or positron emission tomography/computed tomography (PET/CT) scans, were used for clinical staging. The paranasal stage IE was defined as the lesion extending to adjacent tissues or organs. However, limited stage IE was defined as tumors confined to the nasal cavity [25]. In addition, IPI and KPI were also assessed.

The following treatment regimens were used in all patients. Among the total patients, 114 patients received combined chemotherapy and radiotherapy, while the other 97 patients only received radiotherapy. Chemotherapy regimens included CHOP (cyclophosphamide, doxorubicin, vincristine and prednisone), CHOPE (cyclophosphamide, doxorubicin, vincristine, prednisone, and etoposide), GDP (gemcitabine, dexamethasone, and cisplatin), and IMVP-16 (ifosfamide, etoposide, methotrexate). The median follow-up time for all 211 patients was 47.8 months (range, 1.1 to 140.7 months). β2-MG was not assessed in 12 patients, thus only 199 patients with this information were analyzed.

Receiver operating curve (ROC) analysis was used to define the optimal cut-off value for βLRI and LLRI scores. The associations of these scores with clinical and pathological parameters were estimated by using Chi-square test or Fisher’s exact test. Overall survival (OS) was calculated from the date of treatment to date of death caused due to any reason or until the last follow-up period. Similarly, progression free survival (PFS) was assessed from the date of diagnosis to first progression or recurrence after initial response or last follow-up or death. The Kaplan–Meier method along with the log-rank test was used to calculate survival curves. Univariate analysis was used to evaluate the prognostic factors for OS, and factors with a P value of < 0.05 were further analyzed using multivariate analyses by Cox proportional hazards model. All tests were two sided, and p < 0.05 represented statistical significance. All data was analyzed using SPSS version 23.0 (SPSS Inc, Chicago, IL) software.