The incidence of neurodegenerative disease, particularly Parkinson disease (PD) and Alzheimer’s disease, increased markedly in the last decades [1, 2]. Microglia, the major immune cells in the brain, plays a key role in host defence response to injury or infectious agents [3]. Microglia is exquisitely sensitive to brain injury and disease [4]. Overactivation of microglia leads to the production of inflammatory mediators which plays a critical role in the development of neuroinflammation [5, 6]. Neuroinflammation has recently been implicated as an important mechanism responsible for the pathological processes of neurodegenerative diseases [7, 8]. Therefore, the identification of agents to inhibit neuroinflammation might be an effective approach for the treatment of neurodegenerative diseases.

Effects of 6-Shogaol on cell viability 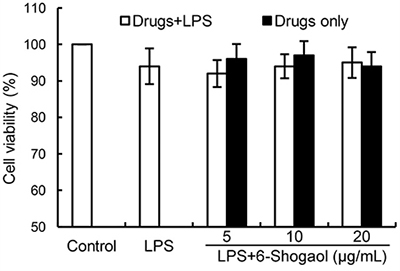 Figure 1: Effects of 6-Shogaol on the cell viability of BV2 microglial cells. Cells were cultured with different concentrations of 6-Shogaol (5, 10, 20 μg/ml) in the absence or presence of 0.5 μg/mL LPS for 24 h. The cell viability was determined by MTT assay. The values presented are the means ± SEM of three independent experiments. 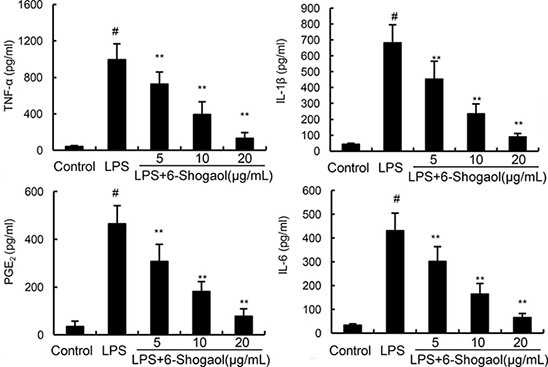 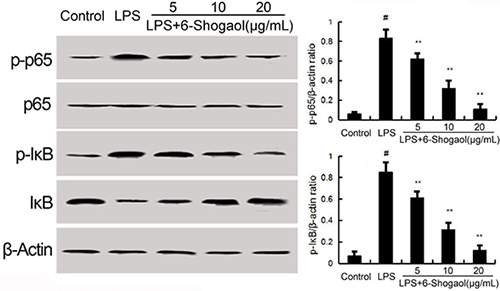 Effects of 6-Shogaol on PPAR-γ expression 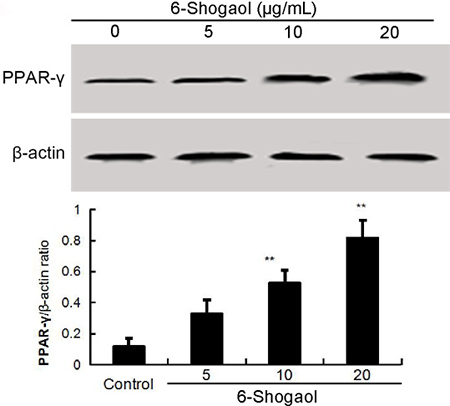 To further evaluate the anti-inflammatory mechanism of 6-Shogaol, PPAR-γ was blocked by its inhibitor GW9662. As shown in Figure 5, our results indicated that the inhibition of 6-Shogaol on TNF-α, IL-1ß, IL-6 and PGE2 production were prevented by GW9662. These results suggested that 6-Shogaol exhibited anti-inflammatory effects in BV2 microglia by activating PPAR-γ. 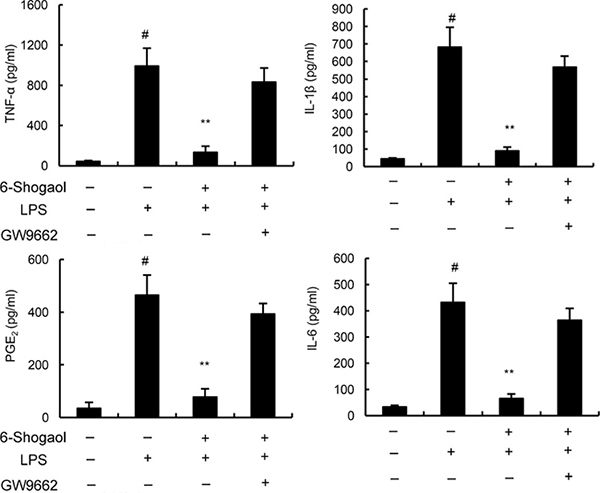 Figure 5: Effects of PPAR-γ inhibitor GW9662 on the anti-inflammatory effects of 6-Shogaol. Cells were treated with GW9662 for 12 h. Then, the cells were treated with 6-Shogaol and stimulated by LPS. The productions of inflammatory mediator were detected 24 h after LPS treatment. The values presented are the means ± SEM of three independent experiments. #p < 0.05 vs. control group; *p < 0.05, **p < 0.01 vs. LPS group.

In conclusion, our results demonstrated that 6-Shogaol suppressed LPS-induced inflammatory mediators production by activating PPAR-γ, which subsequently inhibited LPS-induced NF-κB activation. 6-Shogaol might be an effective agent for the treatment of neurodegenerative diseases.

For determination of cell viability, MTT assay was applied in this study. BV2 microglia was incubated with 6-Shogaol alone and with LPS for 18 h. Then, the cells were treated with MTT for 4 h and the formazan formed was dissolved with DMSO (150 μl/well). The optical density was determined at 570 nm using a Bio-Rad spectrophotometer.

The cells were lysed using RIAP lysis buffer and the concentration was measured by BCA method. Equal amount of protein was resolved using 12% SDS-polyacrylamide gel. The proteins were transferred onto PVDF membranes. The membranes were blocked with 5% skimmed milk and incubated with primary antibodies and HRP-conjugated goat anti-rabbit IgG. The proteins were tested using the chemiluminescence detection system (Amersham, Berkshire, UK). Finally, the bands were analyzed using ImageJ software.

Data were presented as means ± SEM. Statistical comparison of the data were analyzed by one-way ANOVA with post-test Neuman-Keuls. A p value < 0.05 was considered as significant.

This study was supported by grants from the National Natural Science Foundation of China (No. 31672616) and 2016 Open fund project of State Key Laboratory of food science and technology of Nanchang university (SKLF-KF-201614).