miRNA dysregulation and the risk of metastasis and invasion in papillary thyroid cancer: a systematic review and meta-analysis

Thyroid cancer (TC) is the most common endocrine malignancy, with an incidence continuing to grow every year. Although thyroid cancer as a whole is generally indolent and relatively easy to treat, some subtypes carry a higher rate of metastasis and cancer-related mortality. A growing number of studies have focused on the dysregulation of miRNAs in TC. However, differences in methods make comparison of gene profiling data difficult. A meta-analysis of published studies comparing miRNA expression data of invasive thyroid carcinoma with paired non-invasive tumors or normal tissues was performed by searching the literature for “invasion”, “thyroid cancer”, and “miRNA”. This revealed 29 dysregulated miRNAs associated with TC in 16 articles; the presence of invasion was confirmed in each respective article by laboratory research or patient follow-up. Among these miRNAs, miRNA-146b, miRNA-221, and miRNA-222 were analyzed further due to their higher frequencies across multiple studies. Of these studies, 6 were included in the meta-analysis, as they compared invasive PTC with paired normal tissues or non-invasive PTC.

MicroRNAs (miRNAs) are a recently identified class of small, endogenous, non-coding RNAs that act as negative regulators of gene expression [3]. miRNAs are abundant and ubiquitous, and impact almost all fundamental cell processes such as growth, differentiation, apoptosis, and adhesion [4]. Dysregulation of miRNA expression is a common feature in many types of human cancers, including thyroid cancer [5 6].

We initially collected 106 studies using the described strategy. 84 articles were excluded because they were not relevant to the aim of our study. 29 miRNAs in 16 articles were subsequently identified [7-23], with the function of dysregulated miRNAs confirmed through patient follow-up or other laboratory experiments. The dysregulated miRNAs are shown in detail in Tables 1a-1b.

Table 1a: Studies demonstrating an association between upregulated miRNAs and invasion

Table 1b: Studies demonstrating an association between downregulated miRNAs and invasion 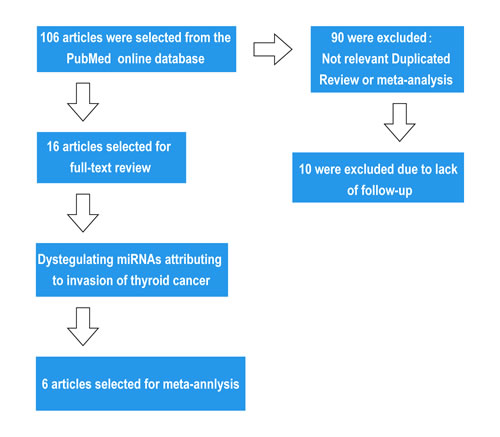 Among these miRNAs, miRNA-146b, miRNA-221, and miRNA-222 were analyzed further due to their appearance at higher frequency. Of the studies that analyzed these miRNAs, 6 were selected for meta-analysis because they compared invasive PTC with paired normal tissues or non-invasive PTC [7-12]. These dysregulated miRNAs are shown in detail in Table 2.

Table 2: Studies included in the meta-analysis

The 6 included articles are shown in Table 2. In all, 201 samples were analyzed, including 91 invasive tumors and 110 paired control tissues (either non-invasive tumors or normal tissue). 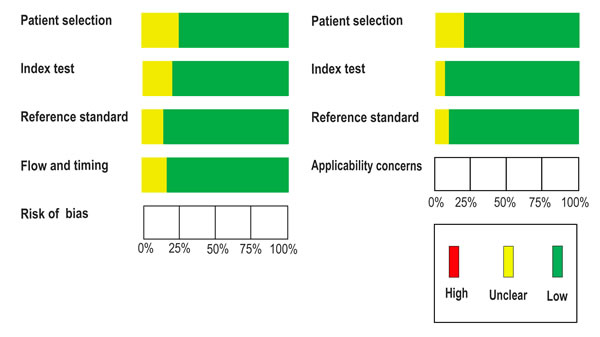 Figure 2: Quality of selected studies according to QUADAS-2 guidelines.

miRNA-146b was upregulated in all 6 studies, while miRNA-221 and miRNA-222 were upregulated in 4 studies. The forest plot is shown in Figure 3. Given that I2 > 50%, the fixed-effects model was used. p < 0.00001 for each miRNA was determined, suggesting that miRNA-146b, miRNA-221, and miRNA 222 are all upregulated in invasive tumors compared with paired control. 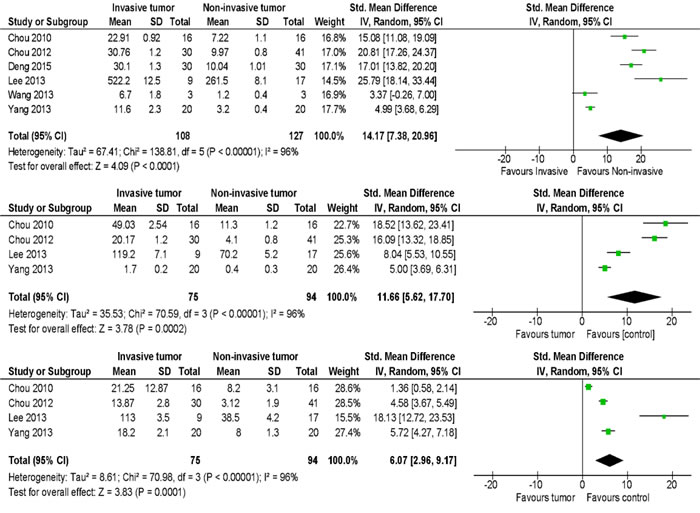 Publication bias in our study was assessed using funnel plot analysis. As shown in Figure 4, there was minimal publication bias in this research, though some amount is unavoidable due to the lack of prior research. 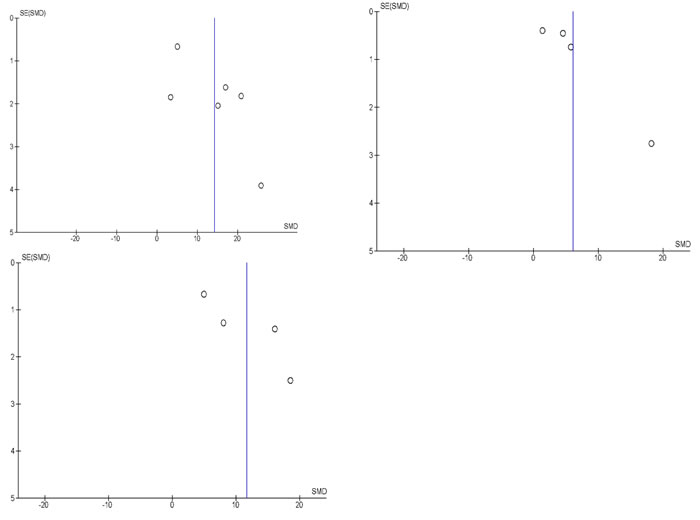 MicroRNAs (miRNAs) are a recently identified class of small, endogenous, non-coding RNAs that act as negative regulators of gene expression [3]. miRNAs are abundant and ubiquitous, and they impact almost all fundamental cell processes including growth, differentiation, apoptosis, and adhesion [4]. Dysregulation of miRNA expression is a common feature of many types of human cancers, including thyroid cancer [5 6].

It is well-known that many dysregulated miRNAs contribute to the tumorigenesis and progression of tumors. Many studies show a direct relationship between dysregulated miRNAs and the molecular mechanisms they induce to affect tumor invasion, but there has been less research addressing the clinical features surrounding invasion ability. In this article, we explored the relationship between dysregulated miRNAs and invasion ability. We searched the PubMed online database using the keywords “papillary thyroid carcinoma” or “thyroid carcinoma”, “miRNA”, and “invasion” and collected 106 records following the strategy described above. 84 articles were excluded because they were not relevant to the aim of our study. 29 miRNAs in 16 articles were identified with the function of the dysregulated miRNAs confirmed via patient follow-up or other laboratory experiments. Among these miRNAs, miRNA-146b, miRNA-221, and miRNA-222 were analyzed further. In total, 6 studies were included in the meta-analysis because they compared invasive PTC with paired normal tissues or non-invasive PTC.

The present meta-analysis has several limitations. Firstly, due to the lack of significant current research, only 6 articles comparing invasive PTC with paired non-invasive PTC or normal tissues were able to be included. Secondly, the divergence of incorporated studies also likely contributed to the statistical differences. Finally, there was a lack of strong correlation between overall patient survival statistics and the presence of dysregulated miRNAs due to lack of patient follow-up.

Research studies were considered to be eligible if they met the following criteria: (1) the study focused on patients with any type of papillary thyroid carcinoma; (2) the effect of the dysregulated miRNA on invasion was confirmed via analysis of the patients’ metastases or other experimental tests in the same article; (3) for meta-analysis articles, miRNA effect was confirmed through patient follow-up. Articles were excluded based on the following criteria: (1) reviews, letters, comments, or pure laboratory studies; (2) absence of specific evidence showing the dysregulated miRNA had any influence on invasion; (3) discrepant conclusions across different articles.

The fixed-effects and random-effects models were used for the meta-analysis according to heterogeneity among the pooled studies. The heterogeneity test for the pooled odds ratio (OR) was verified using the I2 statistic. A random-effects model was applied if the heterogeneity was significant (p < 0.01 or I2 > 50%), while a fixed-effects model was applied if the heterogeneity was not significant (p > 0.01 or I2 < 50%). Publication bias was estimated using a funnel plot. All p values were calculated using a two-sided test; differences were considered statistically significant when p < 0.05. All statistical analyses were conducted using the Review Manager 5 (Cochrane Tech, London, UK) and Microsoft Excel (Microsoft Corporation, Seattle, WA, USA) software.

Current evidence and the findings of this article suggest, despite the limitations described above, that dysregulation of these miRNAs leads to increased invasion ability of thyroid carcinoma.