Isoliquiritigenin (ISL), a member of the flavonoids, is known to have anti-tumor activity in vitro and in vivo. The effect of ISL on reprogramming in cancer cells, however, remains elusive. In this study, we investigated the effect of ISL on reprogramming in human melanoma A375 cells. ISL (15 μg/ml) significantly inhibited A375 cell proliferation, anchorage independent cell proliferation and G2/M cell cycle arrest after ISL exposure for 24 h. However, there were no significant changes in apoptosis rate. Terminal differentiation indicators (melanin content, melanogenesis mRNA expression, tyrosinase (TYR) activity) were all up-regulated by ISL treatment. In ISL-treated cells, glucose uptake, lactate levels and mRNA expression levels of GLUT1 and HK2 were significantly decreased, and accompanied by an increase in O2 consumption rate (OCR) and adenosine triphosphate (ATP) deficiency. Protein expression levels of mTORC2-AKT-GSK3β signaling pathway components (mTOR, p-mTOR, RICTOR, p-AKT, p-GSK3β) decreased significantly after ISL treatment. Co-treatment of ISL and the mTOR-specific inhibitor Ku-0063794 had a synergistic effect on the inhibition of proliferation, and increased melanin content and TYR activity. Glucose uptake and lactate levels decreased more significantly than treatment with ISL alone. These findings indicate that ISL induced reprogramming in A375 melanoma cells by activating mTORC2-AKT-GSK3β signaling.

mTOR is the catalytic subunit of two molecular complexes: mTOR Complex 1 (mTORC1) and Complex 2 (mTORC2) that have distinct substrate specificities, are differentially sensitive to rapamycin, and are differentially regulated [11, 12]. mTOR Complex 1 (mTORC1/RAPTOR) responds to growth signals and nutrients and mTOR Complex 2 (mTORC2/RICTOR) primarily responds to growth signals [13, 14]. Recent studies suggest that mTORC2 has a central function in metabolic reprogramming, thereby contributing to glioblastoma growth and drug resistance [15]. mTORC2 appears to control the metabolic reprogramming of cancer cells in at least three ways: by modulating import of nutrients (glucose, lipids, amino acids), through regulation of the activity or expression of specific metabolic enzymes, and by the rewiring metabolic networks [15]. Recent reports have shown that mTORC2 promoted T cell [16], osteoblast [17] and C2C12 myoblast [18] differentiation, and inhibited cancer cell growth [19–21].

Isoliquritigenin (ISL) is an abundant dietary flavonoid with a chalcone structure, which is an important constituent in Glycyrrhizae Radix (GR). ISL has been shown to have anti-tumor activity in vitro and in vivo [22–24]. Previously, we reported that ISL induced cancer cell differentiation [25, 26], and reduced glycolysis in a mouse melanoma cell line [27, 28]. Despite these advances, very little is known about the pharmacological mechanism of action of ISL in human melanoma cell lines. We hypothesized that ISL might reprogram human melanoma cell lines into terminal differentiation phenotypes by altering metabolic activity through mTOR2 signaling. In addition, we explored ISL’s potential therapeutic mechanisms in A375 human melanoma cell.

After 24 h of exposure, ISL treatment decreased proliferation to 56% compared to control cells (P < 0.05) in a concentration- and time-dependent manner (Figure 1A). In addition, ISL treatment induced morphological changes that are shown in phase-contrast micrographs (Figure 1B). Figure 1B shows a decreased cell number in ISL-treated cells compared with controls, and ISL-treated cells were notably larger in size than control cells. The decrease in cell number was accompanied by a 2-fold decrease in the number of colonies, as measured by the colony formation assay (Figure 1C, Supplementary Figure 1). However, no significant differences were observed in the apoptosis rate between ISL-treated and control cells, with early apoptosis rates of 2.1% and 3.8% in control or ISL-treated cells, respectively (Figure 1D). The percentage of ISL-treated cells in the G2/M phase as measured by flow cytometry was 10.55% compared to 2.26% in control cells with a statistically significant (P < 0.05) (Figure 1E). 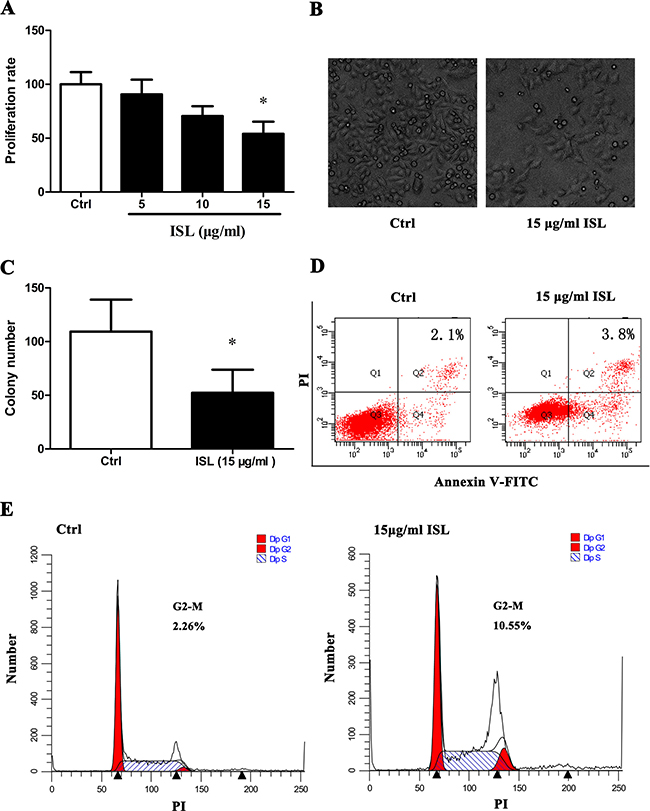 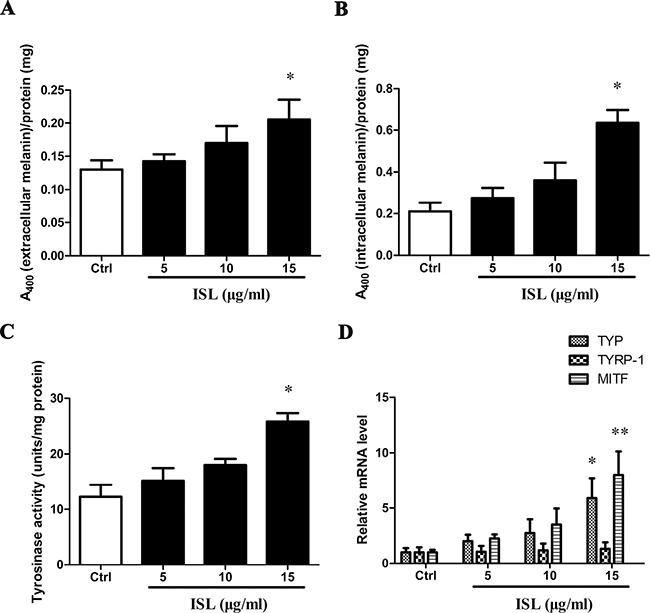 ISL decreased glycolysis and induced ATP depletion in A375 cells

Treatment of A375 cells with ISL resulted in a decrease of glucose uptake (Figure 3A) and release of lactate (Figure 3B) in a concentration-dependent manner. As a positive control, we used 2-deoxy-D-glucose (2-DG), a known inhibitor of glycolysis, via competitive inhibition after phosphorylation by hexokinase [29], and found a significant greater inhibition of glucose uptake and lactate release. To determine the mechanism of action, we evaluated the expression of genes encoding glucose transporter-1 (GLUT1) and the glycolytic enzymes hexokinase II (HK2) and phosphofructokinase (PFK-1). GLUT1 and HK2 expression were reduced in cells treated with ISL (Figure 3C, Supplementary Table 1), while 2-DG caused a marked decrease the expression of all three key glycolysis genes. 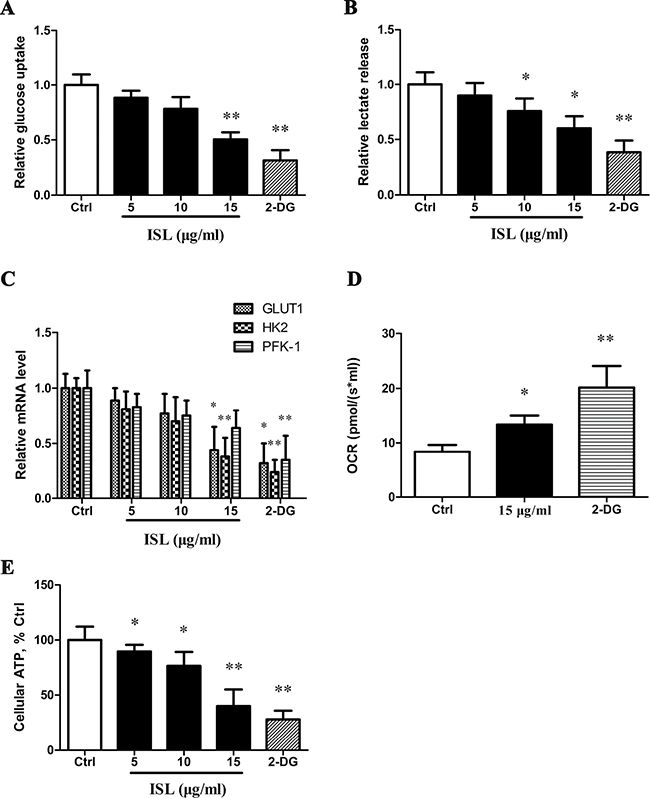 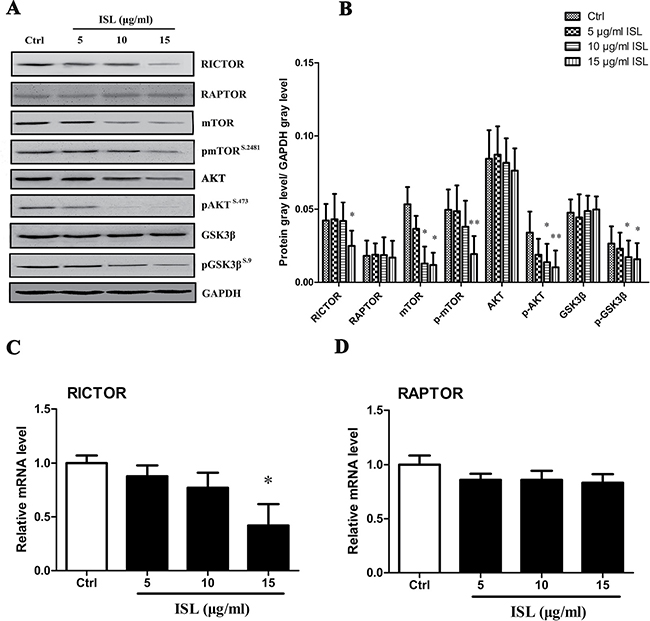 We used the mTOR-specific inhibitor, Ku-0063794 to further characterize the effects of ISL on protein expression and phosphorylation of members of the mTOR pathway. ISL or Ku-0063794 (1 μM) significantly decreased the protein expression of RICTOR and pAKT, without a significant change in total AKT levels (Figure 5A). When these compounds were given simultaneously, effects were synergistic. ISL and Ku-0063794 co-treatment also led to a significant inhibition of A375 cell proliferation (Figure 5B). Both ISL and Ku-0063794 increased intracellular melanin and tyrosinase activity when given alone, and co-treatment was synergistic (Figure 5C, 5D). In addition, Ku-0063794 treatment resulted in a decrease in glucose uptake (Figure 5E) and release of lactate (Figure 5F); these effects were synergistic when given in conjunction with ISL (P < 0.05) (Figure 5E, 5F). 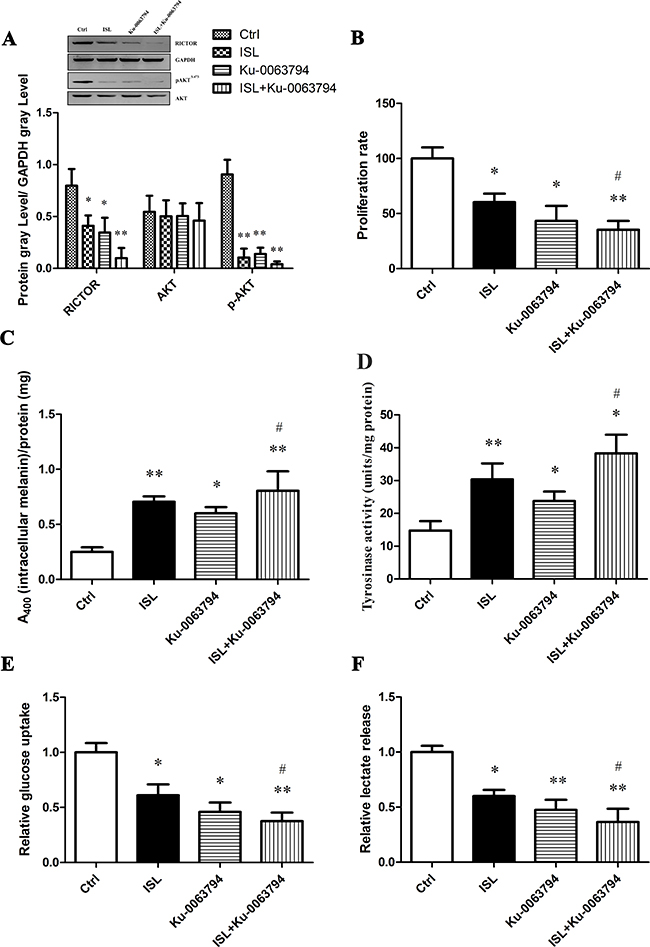 Figure 5: The effect of ISL on mTOR2-AKT-GSK3β signaling using mTOR specific inhibitor Ku-0063794. All assays were performed after A375 cells were treated for 24 hours with 15 μg/ml ISL, the mTOR-specific inhibitor-Ku-0063794 (1 μM), or both drugs simultaneously. (A) Western blot analysis for the mTOR2-dependent protein RICTOR, activated AKT and total AKT. (B) Cell proliferation rate determined by MTT assay. (C) Intracellular melanin content. (D) Tyrosinase activity. (E) Analysis of glucose uptake. (F) Analysis of lactate release in ISL-treated A375 cells in the absence or presence of Ku-0063794. *P < 0.05, **P < 0.01 versus control; #P < 0.05 versus ISL treatment.

Identifying methods to induce terminal differentiation in solid tumors is challenging. In our previous studies, we demonstrated that differentiation of mouse melanoma cells induced by ISL was responsible for diminishing cancer cell cachexia [26]. We also found that ISL altered melanin anabolism and glycolysis of mouse melanoma cells in our recent work [27, 28]. In this study, we hypothesized that ISL was capable of inducing human melanoma reprogramming and we investigated the underlying mechanism of action.

For most of their energy needs, normal cells rely on respiration, which consumes oxygen and glucose to make energy-storing ATP. Cancer cells generally exhibit increased glycolysis for ATP generation (the Warburg effect) due in part to mitochondrial respiration injury and hypoxia [33]. Therefore, if cancer cells are reprogrammed and lose their tumorigenic potential, they will show a higher oxygen consumption and a reduction in glycolysis. ISL treatment decreased glucose uptake and lactic release. Furthermore, ISL reduced the mRNA expression of GLUT, HK2 and PFK-1. GLUT facilitates the transport of glucose, HK2 in turn mediates the first step of glycolysis, and PFK-1 regulates the rate-limiting step of glycolysis [34]. The inhibition of glycolysis was accompanied by depletion of ATP. Interestingly, we found an increased O2 consumption, a parameter of mitochondrial function, following ISL treatment. These observations suggest that ISL reverted metabolic and energy adaptations in A375 melanoma cells.

In many types of cancer, receptor tyrosine kinase (RTK) amplification and mutations, PIK3CA mutations and PTEN loss constitutively activate PI3K-AKT-mTOR signaling [35] and thereby reprogram cellular metabolism. mTOR is a serine/threonine protein kinase that integrates growth factor receptor signaling with cellular growth, proliferation and survival through two distinct multi-protein complexes. mTORC1, a validated cancer drug target, regulates protein translation through its substrates S6K1 and 4E-BP1 as well as anabolic metabolism downstream of growth factor receptor-activated PI3K-AKT signaling and in response to amino acid nutrient levels [36, 37]. However, mTORC2 is less well understood. Recent studies have suggested that mTORC2 may have an unexpectedly important role in cancer pathogenesis, promoting tumor growth and chemotherapy resistance in cancer cells, as well as controlling genome stability in yeast [38]. These effects appear to occur through AKT-independent signaling [39, 40]. mTORC2 is also necessary for the formation of EGFR-PI3K-driven gliomas in a Drosophila model [41], suggesting an important role for mTORC2 signaling that is independent of mTORC1-AKT activation. We sought to determine the impact of ISL on mTORC2 and measured the expression of the mTOR1-dependent protein RAPTOR in order to exclude the effect of mTOR1. We found that ISL modestly decreased the expression of RICTOR, whereas the expression of RAPTOR was not altered. A decrease in the phosphorylation of the downstream target AKT was also detected. AKT-catalyzed phosphorylation of another serine/threonine kinase, glycogen synthase kinase 3 (GSK3), results in GSK3 inhibition [42]. GSK3 is encoded by two known genes, GSK3 alpha (GSK3α) and GSK3 beta (GSK3β). GSK3β regulates a wide range of cellular processes including proliferation, energy metabolism and transcription control [42]. We found the expression of p-GSK3β to be suppressed after ISL treatment.

To determine the influence of mTORC2 on reprogramming of ISL-treated A375 cells, we used the mTOR-specific (mTOR1 and -2) inhibitor Ku-0063794. ISL co-treatment with Ku-0063794 induced a marked decrease in proliferation of A375 cells and an increase in melanin content and TYR activity. A significant reduction in glucose uptake and lactate release was also observed. A limitation of our study is that we were unable to find a mTOR2 specific inhibitor. However, our results identified mTORC2 as a central regulator of ISL-induced melanoma reprogramming and ruled out a role for mTOR1 in this process.

Here, we report that reprogramming of melanoma cells induced by ISL was responsible for diminishing cancer cell cachexia. The mTORC2-AKT-GSK3β signaling pathway has a central function in ISL-induced reprogramming. This work provides a new approach to induce solid tumor terminal differentiation and to investigate how metabolism alteration occurs in the re-differentiation of solid tumors. These findings open a new avenue for the treatment of melanoma.

Cells were treated with vehicle control or ISL and harvested by trypsinization after 24 h. Cells were incubated with Annexin-PI and the assay was carried out according to manufacturer’s instructions (eBioscience, San Diego, CA). Cells were analyzed by flow cytometry using a BD FACS Calibur machine.

Melanin content in cell lysates was evaluated by spectrophotometry at 400 nm and expressed per mg of protein. Tyrosinase (TYR) activity was assayed by measuring L-3, 4-dihydroxyphenylalanine (L-DOPA) oxidase activity [26]. The dopachrome levels were measured at 492 nm [26].

Lactate was measured in the cultured media using a Lactate Assay kit (Source Bioscience Life Sciences) according to the manufacturer’s instructions. Cells were subsequently washed with cold PBS and lysed with 0.1 mol/L NaOH. Incorporated radioactivity was assayed by liquid scintillation counting and normalized to protein content.

Data are presented as the mean ± SD from at least 3 independent experiments. Statistical analysis of the data was performed by Student t test. P values of 0.05 were considered statistically significant.

This study was supported by the National Natural Science Foundation of China (No. 31471338 and 81260338 to Qiusheng Zheng, and 81602556 to Defang Li), the Scientific Research Foundation of Binzhou Medical University (BY2014KYQD01 to Qiusheng Zheng), the Innovative Team Areas of Key Areas of Xinjiang Production and Construction Corps (2015BD005 to Qiusheng Zheng) and the Dominant Disciplines’ Talent Team Development Scheme of Higher Education of Shandong Province.