Chronic heart failure (CHF) is a complex clinical syndrome with a multifactorial etiology including genetic factors [1–6]. Nevertheless, the genetic background for sporadic CHF is poorly characterized yet, and identification of novel CHF susceptibility loci is helpful for personalized diagnosis and treatment of the disease.

Pathological cardiac hypertrophy is an independent risk factor for CHF. Considering the crucial role of CKIP-1 in inhibiting pathological cardiac hypertrophy, CKIP-1 may represent a potential candidate gene for CHF. However, there is no report about association between CKIP-1 polymorphisms and risk of CHF yet. By using the 1000 genome data, we observed rs2306235 polymorphism (Pro21Ala) in CKIP-1, and the 21st amino acid locates in the PH domain of CKIP-1. The PH domain is essential for localization of CKIP-1 in the plasma membrane (PM) and recruitment of multiple proteins to the PM [23]. To make clear the clinical relevance of CKIP-1 rs2306235 polymorphism, we herein performed a case-control study to investigate the association between CKIP-1 rs2306235 polymorphism and risk of CHF in a Chinese population.

Baseline characteristics of the study participants were shown in Table 1. CHF and control participants were well matched in gender and age. The coefficients of variation, skewness, and kurtosis of healthy controls’ age were 13.6%, -0.6, and 0.6, respectively. The coefficients of variation, skewness, and kurtosis of patients’ age were 17.9%, -0.9, and 0.8, respectively. On the basis of selection criteria, controls had no hypertension, coronary heart disease, and diabetes. More participants in CHF group had dyslipidemia, smoking habit, higher levels of systolic and diastolic blood pressure, total cholesterol, triglyceride, low-density lipoprotein cholesterol, but lower level of high-density lipoprotein cholesterol. Etiologies of CHF consisted of 74.9% ischemic and 25.1% nonischemic heart failure.

Table 2: Association of CKIP-1 rs2306235 polymorphism with risk of CHF

Table 3: Association of CKIP-1 rs2306235 polymorphism with severity of CHF

A total of 140 patients were followed up for a median period of 38.7 months. No significant difference in cardiovascular mortality was observed between rs2306235 genotype groups (CC vs GC, p = 0.875, Figure 1). 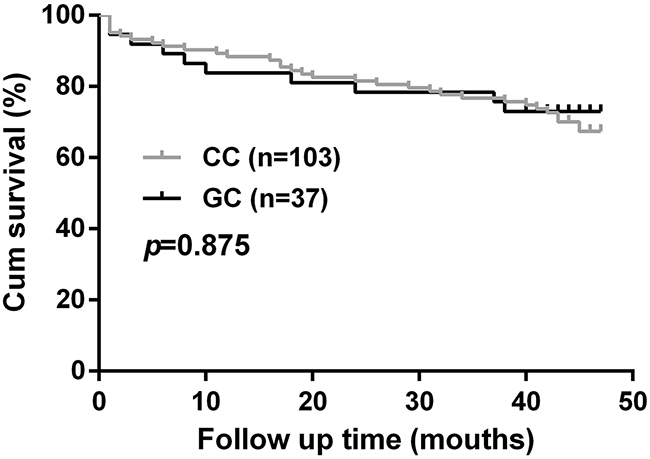 We firstly identified rs2306235 G allele associated with increased risk of CHF in the entire cohort. Stratified analyses demonstrated that the association was still significant in patients with hypertension and coronary heart disease regardless of diabetes mellitus. However, this polymorphism showed no association with severity and cardiovascular mortality in CHF patients.

Rs2306235 is a missense polymorphism (Pro 21 Ala) in CKIP-1 exon 2, which encodes the N-terminal PH domain of CKIP-1 [7]. This PH domain is required for interaction and recruitment of multiple proteins to the plasma membrane, where CKIP-1 localizes predominantly and perform most of its known functions [23]. Functional prediction of this polymorphism was performed using PROVEAN, SIFT, and PolyPhen-2. PROVEAN and SIFT assessment of the proline to alanine amino acid substitution predicted “neutral” and “tolerated”, respectively; and PolyPhen-2 predicted this variant to be benign with a score of 0 (data not shown). However, its exact function deserves further investigation. Moreover, the MAF of rs2306235 polymorphism has ethnic difference. According to the 1000 Genomes Project, the MAF of rs2306235 ranges from 0.063 to 0.129 in East Asian population. However, the MAF is 0 in both American and African population. And also, rs2306235 is a rare polymorphism with MAF of 0.001 in the European population. Therefore, rs2306235 polymorphism may exhibit more significant association with CHF in East Asian population.

Several limitations of this study deserve consideration. First, we only enrolled Han Chinese participants with relatively limited sample size. As MAF of rs2306235 varies among different ethnicities, whether our results are generalized to other ethnicity still needs to be clarified. Second, only rs2306235 polymorphism was investigated in the present study, other potentially functional polymorphisms in CKIP-1 should been evaluated for their association with CHF. In addition, fewer patients were followed up in a relatively short period of time. Further study with larger patients and long term follow up is needed. Finally, functional assessment of rs2306235 polymorphism was not performed. Therefore, further investigations are necessary to clarify the exact relationship between this variant and heart failure.

In conclusion, we firstly revealed the association of CKIP-1 rs2306235 polymorphism with an increased risk of CHF in Chinese Han populations. Further investigations in larger cohorts may be required to verify our findings. More comprehensive survey and functional experiments are also needed to illuminate the exact mechanism behind our findings.

A total of 923 patients with CHF were recruited between November 2011 and December 2014 from Xiangya Hospital, Central South University. The eligibility criteria were described previously [5]. Patients with heart failure were eligible if they were aged 20-80 years and had chronic and stable heart failure symptoms, as demonstrated by New York Heart Association functional class II-IV, for more than three months prior to study initiation. The exclusion criteria were tumors or malignant disease, severe hepatic or renal dysfunctions, and pregnancy. The etiology of heart failure included ischemic heart disease and nonischemic cardiomyopathy. Ischemic heart disease was defined by satisfying one of the following conditions: ≥ 50% luminal stenosis of at least one major coronary artery, history of myocardial infarction ≥ three months before enrolment, history of coronary artery bypass graft, and coronary stent implantation. Patients were contacted by a questionnaire during regular outpatient clinics or by a structured telephone interview. Data concerning cardiovascular mortality during the follow-up period were collected.

A group of 1020 age- and gender-matched healthy controls were also enrolled in physical examination center of the same hospital. The subjects were apparently healthy as assessed by physical examination, serum biochemical testing, and electrocardiogram. Hypertension was defined as participants with a systolic blood pressure (SBP) ≥ 140 mmHg and/or a diastolic blood pressure (DBP) ≥ 90 mmHg or those who received at least one antihypertensive medication. Coronary heart disease (CHD) was defined as luminal stenosis ≥ 50% in at least one major coronary artery branch or myocardial infarction. Diabetic mellitus was diagnosed as a fasting plasma glucose ≥ 7.0 mmol/L or under diabetes medication. The healthy controls had no histories or symptoms of hypertension, CHD, diabetes mellitus, or any other cardiovascular diseases.

All subjects were Han Chinese origin as ascertained by their resident identity card. The study protocol was approved by the ethic committee of School of Pharmaceutical Sciences, Central South University and registered in Chinese Clinical Trial Registry (registration number: ChiCTR-RCC-12002817). Informed consent was obtained from each participants prior to enrollment.

Based on the CHB population (Han Chinese in Beijing, China) of 1000 Genomes project (http://browser.1000genomes.org), a total of seven tag polymorphisms with minor allele frequency (MAF) > 0.05 were identified using Haploview 4.2 software. Among them, only rs2306235 polymorphism is located in CKIP-1 exon. This polymorphism results in replacement of proline by alanine at the 21 amino acid (Pro21Ala). This amino acid is located in the CKIP-1 PH domain [7], which is required for mediating multiple interactions between CKIP-1 and numerous cellular proteins [8]. Therefore, rs2306235 polymorphism was selected in our study.

Venous blood samples were collected into EDTA tube and stored at -20°C. Genomic DNA of each subject was extracted from peripheral blood leukocytes using the standard phenol/chloroform protocol. CKIP-1 rs2306235 polymorphism was genotyped by PCR-restriction fragment length polymorphism. The target fragment of 425 bp was amplified using primers 5’-tgaaaacctttccgaagtgg-3’ and 5’-accactgaacttgcctttgg-3’ (forward/reverse). Five microliters of PCR products was digested with Pst I restriction enzyme (Thermo Fisher Scientific, Waltham, MA, USA) overnight at 37°C. The digested PCR products were then analyzed on an agarose gel followed by ethidium bromide staining. Additionally, a random selection of 5% of the samples was also genotyped by Sanger sequencing with the ABI PRISM 3730XL DNA sequencer (Applied Biosystems, Foster City, CA, USA) and the genotyping were confirmed in 100%.

Continuous values were expressed as mean ± SD and categorical variables as numbers and percentages. Patient characteristics were compared using Chi-square test for categorical variables and independent sample t test or one way analysis of variance for continuous variables. Hardy-Weinberg equilibrium of genotypic distribution was evaluated using a Chi-square test. The association between CKIP-1 polymorphism and the risk of CHF was estimated by unconditional logistic regression analysis adjusting for multiple cardiovascular risk factors. The effect of CKIP-1 polymorphism on disease survival was estimated using Kaplan-Meier curve and Cox proportional hazards regression model. The statistical analysis was performed with SPSS software (version 13.0, SPSS Inc., Chicago, IL, USA). A two-sided p value < 0.05 was considered to be statistically significant.

The authors are grateful to physicians and nursing staff of the Ward 47, Department of Cardiovascular Medicine, Xiangya Hospital, Central South University. Appreciation is also owned to all the subjects for their participation and collaboration.