Previous genetic analyses have suggested that mutations of the genes encoding PI3Kα facilitate invasion and metastasis but have less effect on primary tumor growth. These findings have major implications for therapeutics but have not been factored into pre-clinical drug development designs. Here we show that the inhibition of PI3Kα by newly designed small molecule inhibitors prevented metastasis formation in mice but had much less effect on the growth of subcutaneous xenografts or primary intra-abdominal tumors. These data support the idea that PI3Kα plays an important role in the metastatic process and suggest a more informed strategy for selecting drugs worthy of further development for clinical application.

The phosphatidylinositol-3-kinases (PI3K) class 1A family is a critical regulator of growth, motility and survival functions [1]. PI3K class 1A members transmit signals from a variety of growth factor receptors, creating phosphatidylinositol 3,4,5-trisphosphate (PIP3). PIP3 serves as activator and membrane docking station for PDK1 and Akt proteins, thereby initiating a kinase cascade that connects the cell membrane receptors with nuclear transcription factors. In light of its central role in numerous cellular processes, the phosphorylation of phosphatidylinositol 4,5-bisphosphate (PIP2) is tightly regulated, with PTEN reversing the phosphorylation of PIP2 catalyzed by PI3K Class 1A family members.

The alpha isoform of PI3K (PI3Kα) is one of the most frequently mutated kinases in solid tumors [2, 3]. Structural insights from the study of normal and mutated forms of PI3Kα suggest a release of inhibition by its regulating subunit p85 as well as altered membrane binding as causes for the observed biochemical over activity of the mutants [4-8]. The mutational activation of PI3Kα permits cell survival in culture when growth factors are limiting [6, 8].

PI3Kα is a heterodimer of a catalytic subunit encoded by PIK3CA and one of several regulatory subunits [9]. The high frequency of PIK3CA mutations in human tumors, the localization of mutations to particular “hotspot” regions, and the enhanced enzymatic activity of the mutant gene’s products have made PI3Kα a preferred target for drug development. Indeed, PI3KCA is one of the two most highly mutated oncogenes ever discovered (the other being KRAS). For these reasons, many academic and industrial groups are attempting to develop inhibitors of this enzyme [10-21]. There are currently nine PI3K inhibitors in clinical trials, none of which are particularly specific for PI3Kα. These inhibitors can be classified into six core structures. PX-866 and SF1126 are analogues of wortmannin and LY294002, respectively, with improved pharmacokinetic properties [13, 22]. NVP-BEZ235, PF-04691502, BGT226 and XL765 are novel compounds with a broader and more potent inhibition profile that target PI3Ks as well as mTOR [23-25]. GDC-0941, XL147 and NVP-BKM120 are potent pan PI3K class 1A inhibitors lacking mTOR inhibition [26, 27].

Metastases, rather than the primary tumors themselves, are the cause of death in the vast majority of cancer patients. Interestingly, cancer cell lines in which the spontaneously mutated PI3Kα is genetically disrupted still grow as xenografts in nude mice, though their metastatic ability is severely compromised [8]. Similarly, cell lines in which Akt1 and Akt2 are genetically disrupted form xenografts at their primary sites but do not metastasize as well as their parental lines [28]. Overexpression of Akt1 has also been shown to enhance metastasis in rodent models and Akt2 knockdown inhibited such metastasis [29]. Clinical evidence of the importance of the PI3K/Akt pathway in metastasis development has also been documented [30, 31].

The purposes of the current study were (i) to introduce a novel set of PI3Kα specific inhibitor analogs based on an imidazopyridine core, and (ii) to test the most promising of these compounds for their in vivo activities against primary and metastatic tumors.

We synthesized 121 compounds based on N’- [(1E)-(6-Bromoimidazo [1,2-a]pyridin-3-yl)methylene]-N,2-dimethyl-5-nitrobenzenesulfonohydrazide hydrochloride (J27), a potent PI3Kα inhibitor reported previously [14]. Cyclization of 5-bromo-2-aminopyridine with chloroacetaldehyde gave imidazopyridine, which was formylated and further reacted with various hydrazines to provide the key intermediate compound 3. Acylation or sulfonylation of compound 3 generated the desired compounds (Supplementary scheme 1). Each of the compounds was tested for selective biochemical inhibition of PI3K isoforms in vitro. For this purpose, a baculovirus-based expression system was used to produce the catalytic and regulatory subunits of PI3Kα, PI3Kβ, and PI3Kδ. In the case of PI3Kγ, no regulatory subunit was required for activity [32].

SAR studies began by changing R1 from methyl (J27) to ethyl (J32). The potency for PI3Kα was retained but selectivity against the other three isoforms increased by up to 8-fold (Supplementary scheme 1, Table 1). Increasing the size of R1 by substituting ethyl (J32) with isopropyl (J55), iso-butyl (J46) or benzyl (J30) caused a 6 to 49-fold drop in inhibitory activity for PI3Kα. Polar groups such as ester (J43) and nitrile (J47) at R1 did not increase potency. A switch of the sulfonyl group at X to a carbonyl (J45) did improve inhibitory activity for PI3Kβ, PI3Kγ and PI3Kδ, but not for PI3Kα, thus decreased selectivity for the latter. With respect to the terminal phenyl ring, deleting a methyl group at R2 (J37) or a nitro group at R3 (J40) resulted in greater than 3.6-fold and 1333-fold decreases in inhibitory activity for PI3Kα, respectively. However, a chloro (J101) substituent at R2 was able to maintain potency and isoform selectivity as long as a nitro group was also present at R3. The R3 nitro group turned out to be critical in this configuration, as substitutions by various moieties, including carboxylic acid (J100), amino (J44), amido (J125) and methyl sulfonyl (J41) groups all impaired potency. We discovered that a substitution at the R4 position next to the nitro group on the phenyl ring was beneficial and that the R4 position in general accepted larger substituents without major impact on potency. Amino (J124-I), glycino (J159) and trifluoroacetylamino (J124) groups at the R4 position increased inhibitory activity for PI3Kα by 7.5, 3.8 and 1.4-fold, respectively, when compared to J32. Other substitutions, such as fluoro (J120), hydroxyl (J129) and various amino groups (J157, J158, J161, J162, J163), did not impact the inhibitory activity for PI3Kα substantially. Even larger substitutions as well as oligopeptide adducts retained nanomolar potencies (e.g. J171). 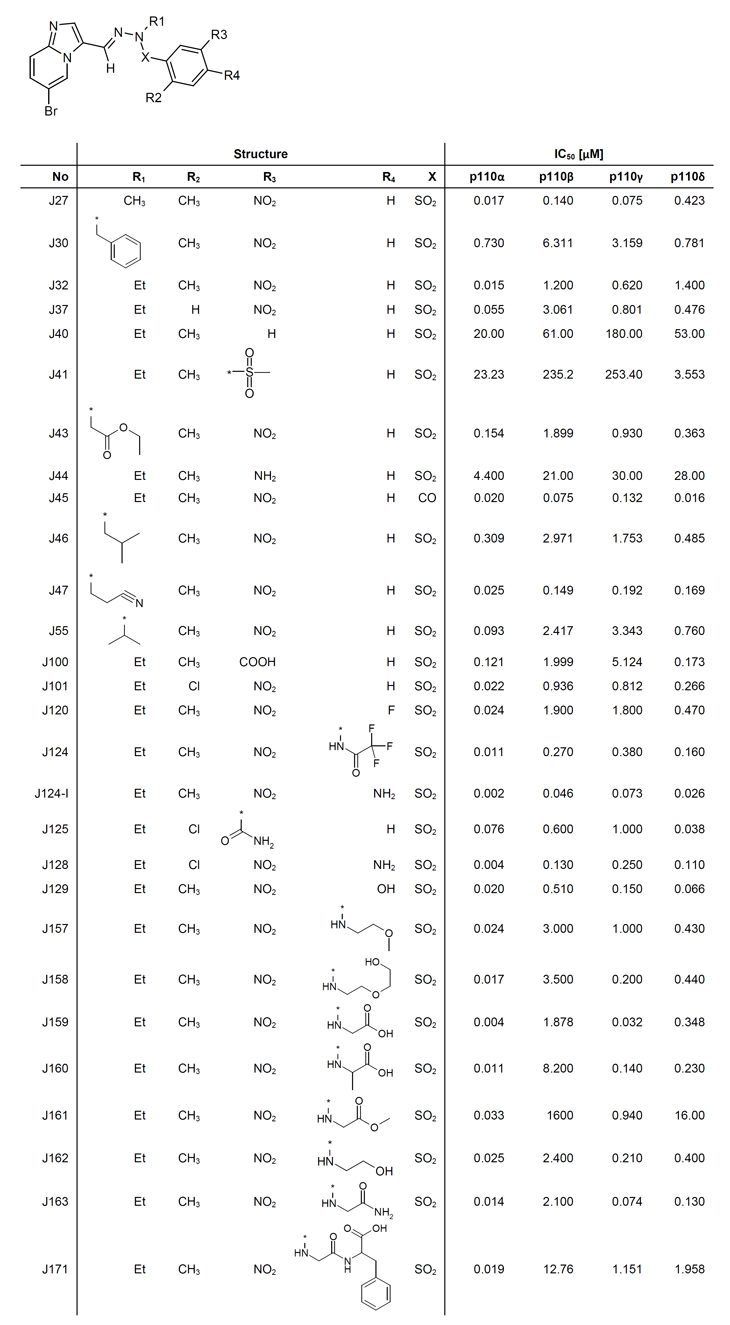 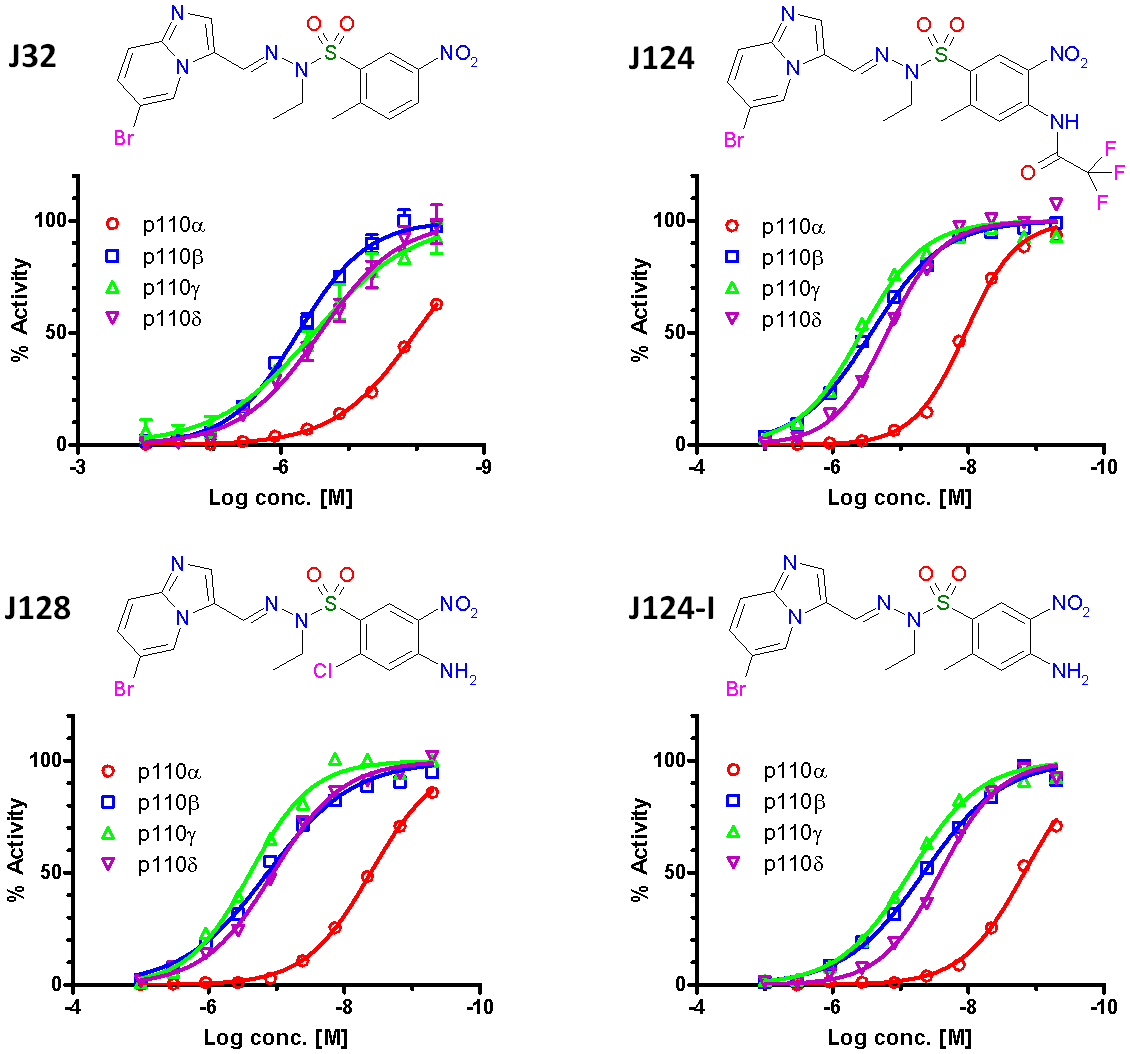 All 42 compounds with a PI3Kα IC50 below 100 nM were assayed for their ability to inhibit the growth of HCT116 cells in culture. These cells were derived from a human colorectal cancer containing one mutant (H1047R) and one normal allele of the PIK3CA gene. Paired isogenic lines in which one of the two alleles was disrupted through homologous recombination have been generated [8] and were also tested. We found that the 42 compounds inhibited cell growth to varying extents, but none of them inhibited the growth of the cells with a mutant PIK3CA allele more than their isogenic counterparts with only a normal allele (example in Fig. 2A). It has previously been demonstrated that the PIK3CA mutations allow cells to proliferate in growth medium containing limiting concentrations of growth factors [2]. Cells with both genotypes were more sensitive to the compounds when grown under conditions where growth factors were limiting, but these conditions did not provide specificity for the cells with a mutant PIK3CA allele (Fig. 2A)

To identify the most promising drug leads for in vivo evaluation, a matrix of cellular and biochemical potency of the 42 compounds with nanomolar IC50’s was constructed (Fig. 2B). We searched for potent compounds that inhibited cell growth at concentrations consistent with their ability to inhibit PI3Kα enzymatic activity. None of the compounds inhibited growth at concentrations less than their biochemical Ki. Compounds that did not inhibit cell growth even at concentrations much greater than their Ki’s were assumed to be cell impenetrant or inactive in an intracellular environment. Four compounds (J32, J124, J124-I, and J128) with biochemical and cellular activities which we considered optimal were chosen for further analysis. 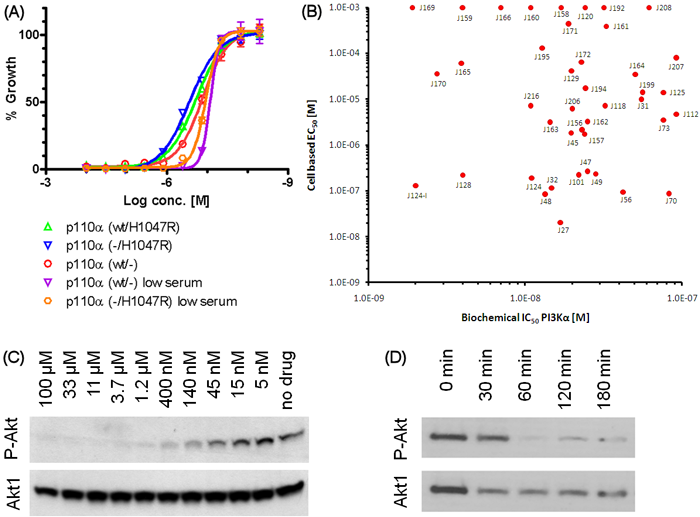 J-series compounds are potent and selective inhibitors of metastatic disease

We next tested these compounds in vivo. Through dose escalation studies, we found that the compounds were tolerated at concentrations up to 150 mg/kg when administered intraperitoneally daily for three weeks. Two of the compounds (J32, J124-I) were evaluated for their ability to inhibit the growth of subcutaneous HCT116 xenograft tumors in nude mice. Only a minor anti-tumor activity was noted (Supplementary Fig. 1), even though the compound inhibited the phosphorylation of Akt1/2 in the growing tumors (Fig. 2D).

To test the compounds in a context more relevant to the proposed tumorigenic role of PI3Kα, we evaluated their ability to inhibit the development of metastases from tumors injected into the spleen. Such injections give rise to large, primary intrasplenic tumors and multiple metastatic lesions in the liver, as well as a few tumor nodules in the lungs. The tumor-bearing animals were treated daily by intraperitoneal injections of J124 or J128 at 150 mg/kg starting three days after tumor implantation. Metastatic burdens were assessed through histopathology analysis three weeks later. All mice had large intrasplenic tumors, but the mice injected with J124 or J128 had few, if any, metastatic foci in their livers compared to animals injected with the vehicle alone (Fig. 3A). Sections of the liver and lungs revealed multiple tumor foci in control mice but not in mice treated with J124 or J128 (Fig. 3B). 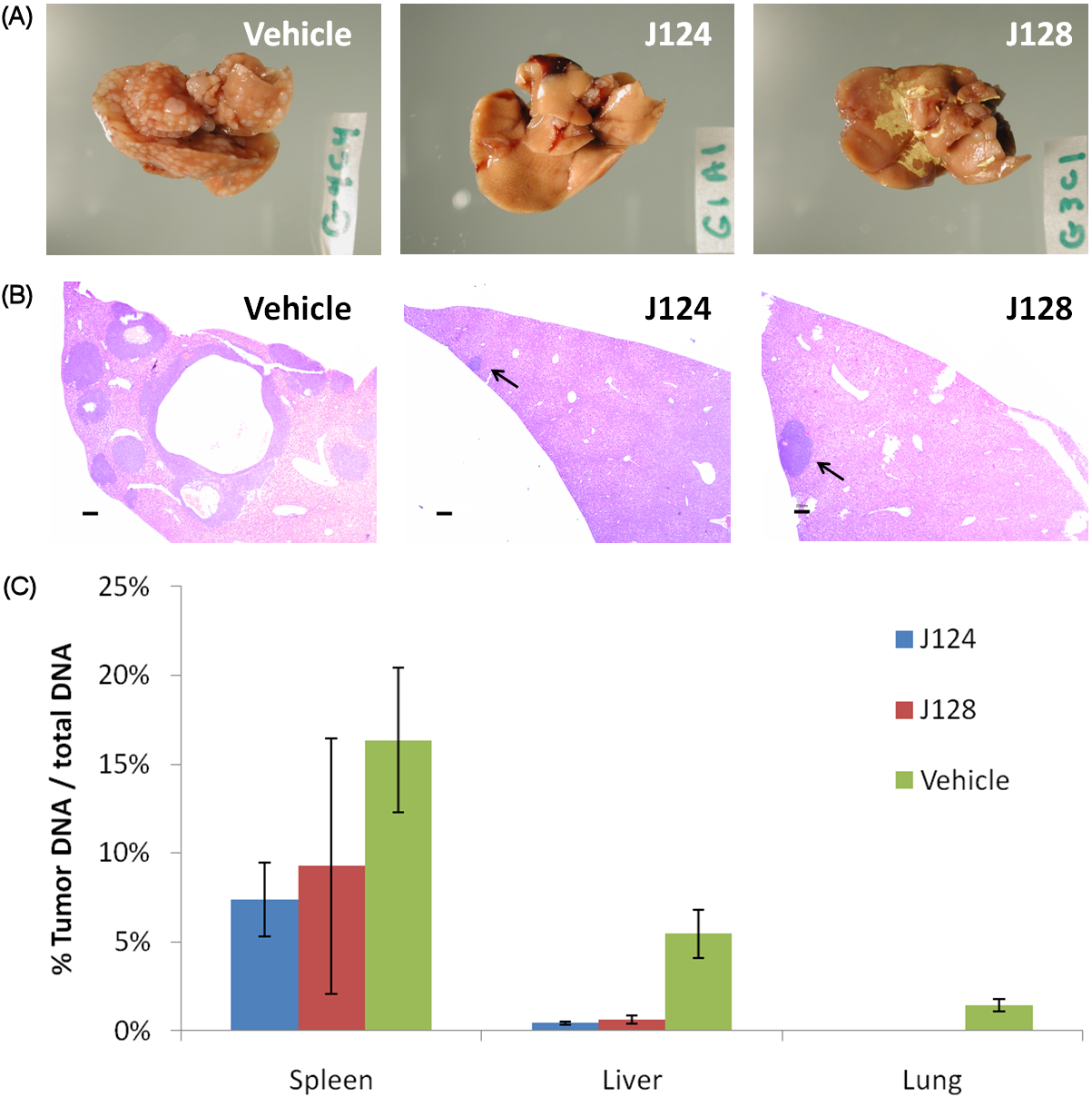 We describe above a class of inhibitors that are highly specific for the alpha isoform of PI3K enzymes. Most published cell biologic and physiologic studies employing PI3Kα inhibitors have used either wortmannin or LY290042. These classic compounds have proven useful but are non-specific with respect to PI3K isoforms. The compounds we have synthesized should prove superior for such research purposes and will be made freely available upon request. Furthermore, the detailed evaluation of structure activity relationships provides leads for further optimization of this and related classes of compounds. Particularly intriguing was the discovery that the R4 position accepted very large substituents, even peptides, without major impact on potency. This finding sets the stage for the development of bi-functional compounds that may have uniquely specific activities.

Our studies also provide strong pharmacologic evidence for the role of PI3Kα in metastasis. Apart from the biologic implications of this finding, it has important practical ramifications. All anti-cancer compounds, including those targeting PI3Kα, are tested in pre-clinical models prior to their introduction into Phase I clinical trials. In general, therapeutic efficacy against a well-chosen tumor cell line is required to move forward. For example, PI3Kα inhibitors might be tested against xenografts of human cancer cell lines which have mutations of PIK3CA, for obvious reasons. Our results show that it is not only the choice of cell line that is important for pre-clinical testing, but also the choice of the in vivo model in which the testing is performed. J124 and J128 have little activity against subcutaneous tumors, or even against intra-abdominal primary tumors, but could potently inhibit the development of metastases. These results suggest that testing of novel compounds against tumors grown subcutaneously in immunocompromised mice could be misleading, stimulating researchers to discard drugs that might be useful in the clinic.

The pharmacologic data provided in this study are in perfect accord with prior genetic data. In particular, homologous recombination-mediated disruption of a mutant PIK3CA allele did not inhibit the growth of primary tumors but did inhibit metastatic growth [8]. No drug could possibly inhibit the mutant PI3Kα isoform as completely, permanently, and specifically as a genetic knock-out. We would thus argue that any drug that is designed to inhibit this enzyme should yield similar results in vivo, exhibiting minor effects on primary tumors and major effects on metastases. And conversely, drugs that inhibit the growth of primary tumors grown subcutaneously must be doing so by off-target effects. We believe that most of the drugs now being considered or used for clinical trials have not met this straight-forward expectation. On a positive note, attention to this expectation could lead to an improved selection of drugs for future clinical trials, thereby expediting the drug development process.