Methods: Thirty Japanese rabbits were randomized into three groups: control, alloxan-induced diabetes with and without apocynin treatment at 15 mg/kg/day for 8 weeks (n = 10 for each group). Echocardiography was performed and hemodynamics were assessed by carotid and LV catheterization. LV cardiomyocyte cross-sectional area and interstitial fibrosis were evaluated by histology. Serum nitric oxide (NO), malonaldehyde, myeloperoxidase, superoxide dismutase (SOD) levels, and activity of LV tissue NADPH oxidases was assessed. Expression of proteins involved in pro-inflammatory and pro-fibrotic signaling were determined by Western blotting.

The prevalence of type 2 diabetes mellitus is expected to reach 5.4%, affecting approximately 300 million by 2025 globally [1]. Diabetes, especially if glycemic control is poor, causes damage to multiple organ systems, leading to significant morbidity and mortality. For example, it can result in cardiac hypertrophy, cardiomyopathy and heart failure [2, 3]. Histologically, this is reflected by the increased amount of fibrotic tissue within the myocardium [4]. In addition to mechanical dysfunction, this can lead to impaired conduction of action potentials [5], increasing the likelihood of re-entrant arrhythmias and sudden cardiac death [6].

Recent research efforts have focused on elucidating the molecular mechanisms by which increased oxidative stress is generated in diabetes, and how this leads to vascular and cardiac dysfunction [7–9]. Recently, our group demonstrated that higher levels of oxidative stress were associated with increased atrial fibrosis in an alloxan-induced diabetic rabbit model [10–13]. In the ventricles, reactive oxidant species (ROS) can also promote cardiac hypertrophy, fibrosis, contractile dysfunction and eventually pump failure [14]. The primary sources of ROS include the nicotinamide adenine dinucleotide phosphate (NADPH) oxidases, mitochondria, xanthine oxidases, and uncoupled NO synthases (NOS) [14], while NADPH oxidase (NOX) activates redox signaling, in turn causing tissue injury [15, 16].

Apocynin is an effective inhibitor of NADPH oxidase [17] by preventing p47phox assembly to the enzyme core [18]. In this study, we tested the hypothesis that this agent may protect against ventricular hypertrophy and fibrosis in an alloxan-induced diabetes model in rabbits. This was achieved by experiments conducted at different levels of complexity, from hemodynamic and mechanical functions at the whole organ level, to determination of protein levels and activity of pro- and anti-oxidant enzymes at the tissue level.

Our initial experiments confirmed that alloxan successfully induced diabetes in the rabbits after 6 weeks, leading to lower body weight, increased glucose levels and decreased insulin levels compared to control (Table 1) (P < 0.05). Apocynin treatment did not alter these parameters. There were no differences in blood urea nitrogen, creatinine, total cholesterol, triglyceride or low density lipoprotein levels between the three groups. Whilst high density lipoprotein was not significantly different between the control and diabetic groups, we observed a reduction in its levels with the apocynin group.

After echocardiographic and hemodynamic assessments, the hearts were weighed as a whole and for the left ventricle only. Whole heart weight and left ventricular weight ratios were significantly increased in the diabetic group compared with controls but not further altered by apocynin (P < 0.05) (Table 3). Mean cross-sectional area of cardiomyocytes from the left ventricle was higher (Figure 2) and greater amount of interstitial fibrosis, as measured by the left ventricular interstitial collagen volume fraction (Figure 3), were observed in the diabetes group compared to control (P < 0.05). These changes were prevented by apocynin treatment (P < 0.05). 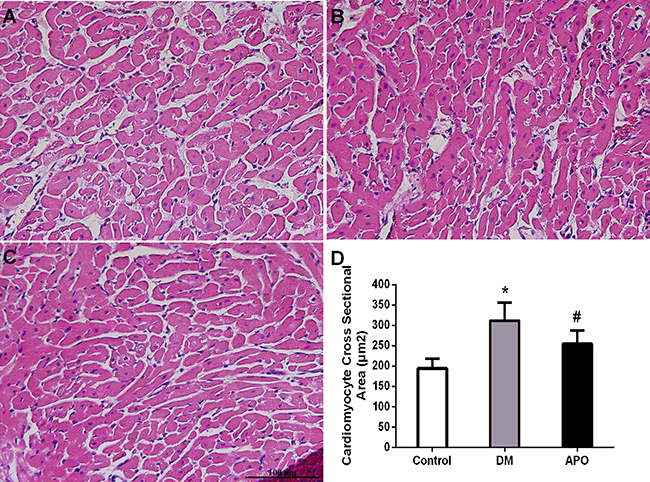 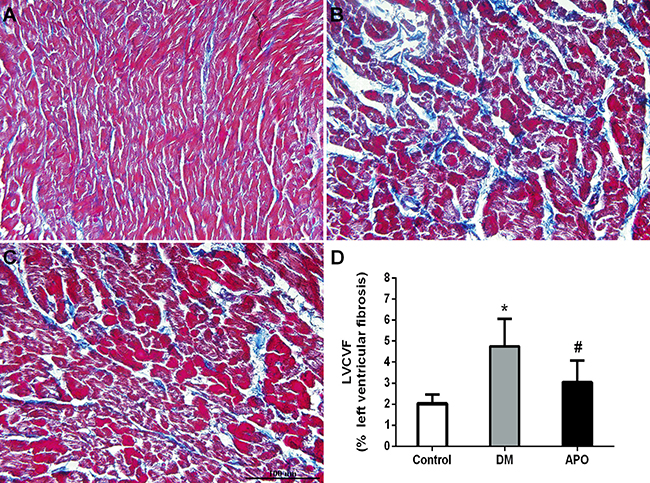 Figure 3: Interstitial fibrosis (×400) in the control (A), diabetic group (B) and apocynin treatment group (C). (D): Left ventricular interstitial collagen volume fraction (LVCVF), expressed as a percentage in each group. * and # indicate significant difference when apocynin treatment group was compared with control group and the diabetes group, respectively (P < 0.05).

Figure 4 shows representative Western blots for the protein expression involved in pro-inflammatory and fibrotic signaling pathways. Expression levels of transforming growth factor-beta (TGF-β, A), metalloproteinase-9 (MMP-9, B), nuclear factor kappa B (NF-κB, C), Ras-related C3 botulinum toxin substrate 1 (rac1, F), p38 (G) and phosphorylated p38 (H) were significantly in the diabetic group compared to controls. All of these changes were prevented by apocynin treatment. By contrast, expression of gp91phox (D) and p22phox (E) were not significantly different between the three groups (P < 0.05). 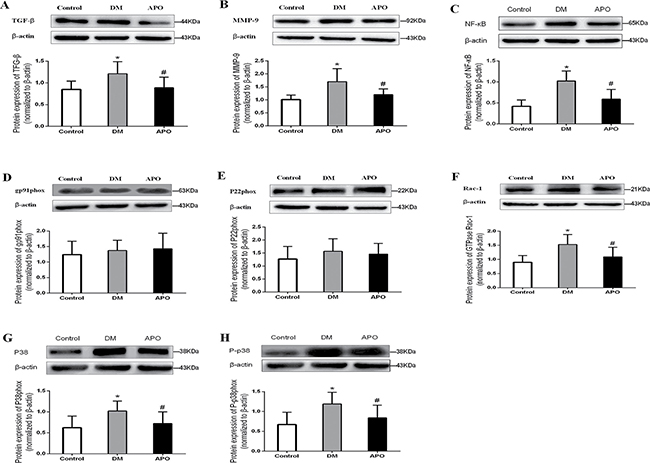 Higher levels of oxidative stress are known to promote inflammation, fibrosis, and apoptosis [19]. Cellular hypertrophy and fibrosis, features commonly observed in diabetic cardiomyopathy [4], are promoted by increased reactive oxygen species (ROS) production [20–23]. In diabetic cardiomyopathy, interstitial fibrosis occurs primarily as a result of increased type III collagen deposition [22–24]. Hyperglycemia enhances the glycation of proteins and lipids [25], and activates NOX via protein kinase C (PKC) [26]. NOX is a major source of ROS [14] and plays a critical role in hyperglycemia-induced oxidative stress in the heart [27]. Increased NOX-dependent ROS production has been confirmed in hearts isolated from diabetic animals and cultured cardiomyocytes exposed to high glucose concentrations [28, 29]. The catalytic subunits of NOX include gp91phox and p22phox. Our Western blot experiments showed no differences in p22phox and gp91phox between control, diabetes alone or diabetes treated with apocynin. Rac1 is a cofactor for assembly of the active NOX complex [30, 31]. It has been shown that cardiomyocyte-specific Rac1 deficiency reduced ROS production and prevented cardiac fibrosis and hypertrophy in STZ-induced diabetic mice [32]. In our experiments, we demonstrated upregulation of Rac1 in diabetes. These findings suggest that enzyme activation rather than transcriptional control was responsible for the enhanced NOX activity [33, 34].

Increased oxidative stress can activate NF-κB, a major transcriptional regulator that can induce the expression of TGF-β, resulting in fibrosis [35]. The mitogen-activated protein kinase family is involved in a diverse number of regulatory processes, include response to growth signals, apoptosis, and stress [15]. One of these kinases is the p38 MAPK. In isolated perfused rat hearts, p38-MAPK are activated by increased oxidative stress [36]. In our study, the fact that expression of this kinase was also raised suggested that cardiac fibrosis and hypertrophy may be dependent on this signaling pathway.

There are many approaches that can be used to reduce oxidative stress. Oxidation processes of proteins and lipids by ROS may be so rapid, that scavenging antioxidants, such as vitamins C and E, may not able to counteract their actions. Indeed, experimental evidence suggests that upstream therapies may be more effective to prevent oxidative damage by inhibiting ROS formation [37], rather than acting to reduce their damage once they are formed. A potential target would be NOX, which is inhibited by the agent apocynin. Previous experiments have shown that apocynin can prevent endothelial dysfunction in diabetic rats [38]. It ameliorated ventricular hypertrophy and fibrosis in a rabbit myocardial infarction model of heart failure [18]. It also decreased tachycardia-induced TGF-β1-mediated atrial fibrosis [39].

In conclusion, our data demonstrate that apocynin can prevent structural remodeling in diabetes. Further studies are needed to examine whether it can similar prevent abnormal electrophysiological remodeling to reduce the incidence of ventricular arrhythmias in diabetic cardiomyopathy.

Study design and preparation of the rabbit DM model

Following echocardiographic examination, the rabbits were intravenously heparinized (1,200 IU) via the marginal ear vein. Carotid vein blood was collected for serum biochemical tests. The right carotid artery was isolated surgically. A catheter was inserted into the carotid artery to measure aortic systolic and diastolic blood pressure. Subsequently it was inserted into the left ventricle to measure the LV end-diastolic pressure.

Following the hemodynamic studies, the hearts were removed. The wet weights (mg) of the left ventricle and the whole heart were measured. The left ventricular tissue was placed in 4% paraformaldehyde, embedded in paraffin, and cut into 5 mm cross-sections. The specimens were stained by hematoxylin and eosin (H&E) and cardiomyocyte cross-sectional area with the investigator blinded to the group of the rabbit. Ten random fields were studied per animal whereas the cardiomyocyte cross-sectional area was evaluated from myocytes cut in the short axis with an obvious nucleus. Masson’s trichrome staining (Nanjing Jiancheng Bioengineering Institute, China) was used to evaluate ventricular interstitial fibrosis. Microphotographs were digitized using PHOTOSHOP 7.0 (Adobe, San Jose, CA) while cardiomyocyte cross-sectional area and areas of fibrosis were analyzed using Image PRO PLUS 7.0 SCION image software (Scion co., Frederick, MD, USA). The left ventricular interstitial collagen volume fraction (LVCVF) was defined as a quantitative ratio of the area of fibrosis to the area of the reference tissue.

Statistical analysis was performed using SPSS 13.0 statistical software. All data are expressed as means ± standard deviation, Differences between groups were assessed using the Student’s t-test (unpaired), and differences between three groups were analyzed by one-way ANOVA with post-hoc comparisons by the LSD test. A two-tailed P-value < 0.05 was considered statistically significant.

35. Rameshwar P, Narayanan R, Qian J, Denny TN, Colon C, Gascon P. NF-kappa B as a central mediator in the induction of TGF-beta in monocytes from patients with idiopathic myelofibrosis: an inflammatory response beyond the realm of homeostasis. J Immunol. 2000; 165:2271–2277.