VHL disease is caused by germline mutations in the VHL tumor suppressor gene, which is located on chromosome 3p25-26 [7]. The gene consists of 3 exons: exon 1 spans codons 1–113 (nucleotides 1–340), exon 2 spans codons 114–154 (nucleotides 341–463), and exon 3 spans codons 155–213 (nucleotides 464–642) [7–9]. The protein product of the VHL gene (pVHL) has two main domains. One b-sheet domain (residues 63–154) binds the a subunits of hypoxia inducible factor (HIF) at residues 65–117 and one a-helical domain (residues 155–192) binds Elongin B, Elongin C and Cul2 at residues 158–184 thereby forming the VCB-Cul2 complex [10–12]. pVHL plays a key role in regulating proteolytic degradation of the a subunits of HIF in normoxic conditions [13–15]. In states of normoxia, the VCB-Cul2 complex leads to the ubiquitination of HIF thereby promoting its degradation in the proteasome [2, 16]. pVHL inactivation leads to HIF stabilization and activation of downstream target genes that are overexpressed in the highly vascularized tumors that are characteristic of VHL disease [17, 18].

The clinical diagnosis of VHL disease can be made if a single VHL associated tumor (hemangioblastoma, PHEO or RCC) occurs in a patient with a family history of VHL [4]. In the absence of a positive family history of the disorder, the diagnosis can also be made if a patient harbors two or more hemangioblastomas or both a hemangioblastoma and a relative visceral tumor [6, 19]. Patients can also be diagnosed with VHL disease if germline mutations of the VHL gene have been identified. The detection of VHL mutations aids in the early diagnosis of the disease for at risk individuals, but also enables the study of genotype-phenotype correlations.

VHL disease demonstrates marked phenotypic variability, and patients may develop manifestations from early childhood and through adulthood [20, 21]. The genotype-phenotype correlation in VHL disease has been examined previously and classification schemes have been proposed based on patient’s predilections for PHEO development. VHL Type 1 is characterized by truncating mutations and confers a low risk for PHEOs while VHL Type 2 is characterized by missense mutations (M mutations) which are associated with an increased risk for PHEOs [22–26]. Type 2 was subsequently divided into Type 2A (hemangioblastoma and PHEO but rarely RCC), Type 2B (susceptible to hemangioblastoma, RCC, and PHEO), and Type 2C (PHEO only) [27, 28]. These correlations have provided useful strategies for prophylactic surveillance and genetic counseling of asymptomatic members in VHL families. These existing studies are mainly derived from western countries and the genotype-phenotype correlations from Chinese VHL cohorts remain unclear. Furthermore, the current VHL classification schemes are imperfect and up to 44% of patients with VHL Type 1 will harbor a M mutation while 15% of Type 2 patients will not harbor a truncating VHL mutation [3]. Thus, a better understanding of specific genotype-phenotype correlations is imperative for targeted surveillance and counseling of VHL disease which bears the shortest median survival of all tumor predisposition syndromes [29].

Herein, we analyze a large number of VHL patients to date in order to: (1) analyze how different mutation types of the VHL gene have influenced phenotypes in VHL patients, (2) assess the correlations between mutation regions and phenotypes, and (3) establish genotype-phenotype correlations of the disease at codon level. 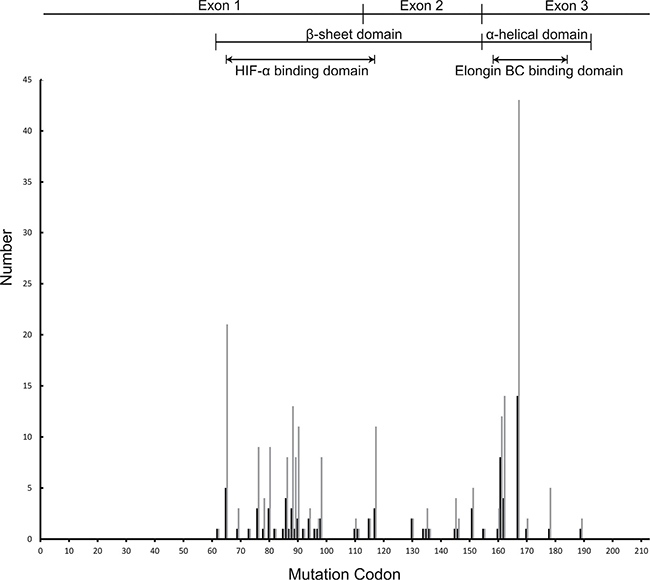 Figure 1: The distribution of germline mutations by codon in Chinese VHL families and patients. The dark lines on the Y-axis represent mutational family numbers and the light lines represent mutational patient numbers. All intragenic mutations were located between codons 62 and 189. The most commonly mutated codon was codon 167. 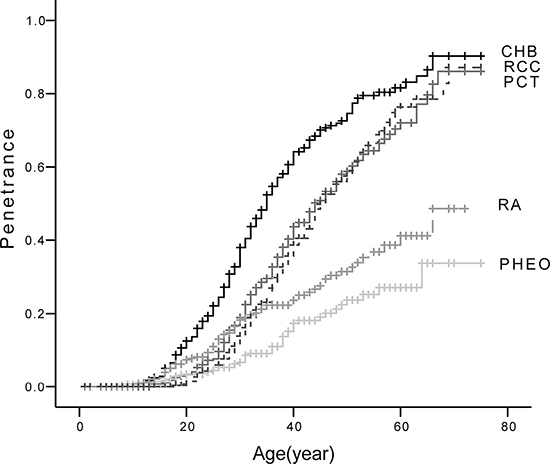 Table 1: Comparison of the age-related risks and mean diagnostic ages of the five major VHL lesions in patients with different mutation types 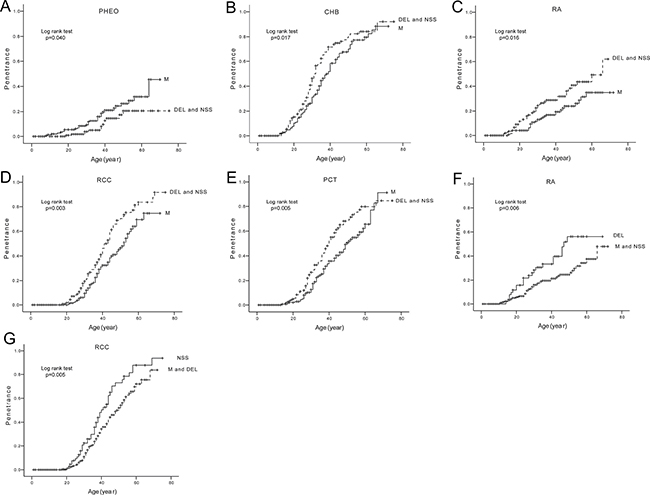 Table 2: Comparison of the age-related risks and mean diagnostic ages of the five major VHL lesions in patients with mutations in different Exons of the VHL gene 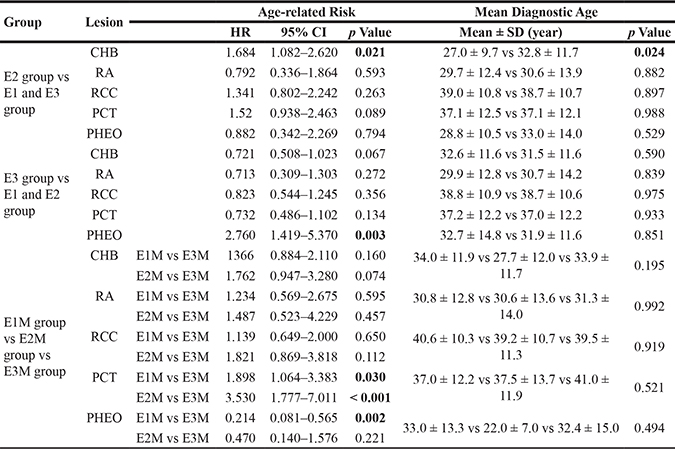 Codon 167 was the most frequently mutated codon of VHL gene in our study. We compared the age-related risks and mean diagnostic ages of the five major VHL lesions in patients with mutations at codon 167 (C167 group) and patients with other mutations (N-C167 group). The results are summarized in Table 3 and Figure 5. C167 mutations conferred a significantly higher risk of PHEOs development, but a lower risk of CHBs, RCCs and PCTs compared to the N-C167 group (Figure 5A–5D). The risks of RAs in the two groups were similar. 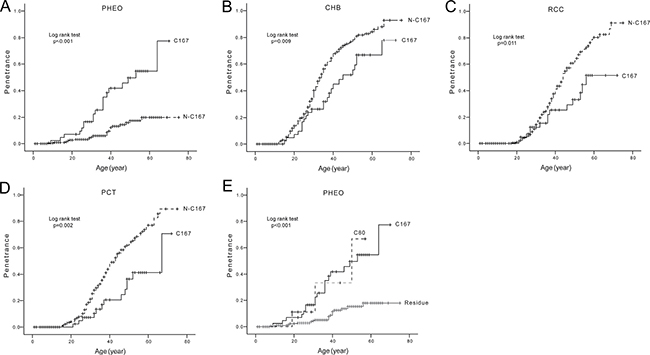 We calculated age-related survival of patients with different VHL mutations and the results are presented in Supplementary Table 2. Median follow up was 5 years (range 1–42 years), over total 2305 person-years. Median expected survival of all studied patients was 60 years. Mean age at death was 42.6 ± 13.8 years. There was no significant difference between the risks of VHL-related death of patients with different VHL mutations.

This study analyzed the largest cohort of Chinese VHL patients reported to date to investigate genotype-phenotype correlations in VHL disease. The results of our study indicate that mutation regions and mutation codons act as VHL phenotypic predictors and may aid in the directed surveillance and monitoring of VHL patients.

Next, we further explored the genotype-phenotype correlations for PHEOs at the codon level and found mutations at codon 80 or codon167 conferred significantly higher risks of PHEOs than other mutations. Codon 167 has been implicated with PHEO development in VHL patients from foreign countries [24]. This study reveals Codon 80 confers a higher risk of PHEOs for the first time in Chinese patients. These results were inspiring because they indicated that mutation regions and mutation codons could act as phenotypic predictors for the presence of PHEOs in VHL patients. Further studies based on larger, multinational cohorts are needed to verify our results and to explore more mutation regions and mutation codons to act as VHL phenotypic predictors.

The pathogenesis of PHEOs remains unclear. It has been previously shown that M mutations on the surface of pVHL confer the highest rate of PHEO development while mutations within the protein or DEL mutations have low rates of PHEO development [26]. Thus it has been hypothesized that the mutations accountable for PHEO development may induce gain-of-function through an intact, but altered pVHL [11, 32, 33]. This is consistent with the finding that in patients with Type 2C VHL, pVHL remains able to downregulate HIF, thereby explaining the absence of RCC and CHB [12, 32, 33]. In our work, we found mutations at codon 167 conferred a much higher risk of PHEOs, but a lower risk of CHBs, RCCs and PCTs than other mutations. Mutant VHL gene carrying mutations at codon 167 could still be able to downregulate HIF and may account for the lower risk of CHBs, RCCs and PCTs in patients with mutations at this codon.

In our study, we found NSS mutations conferred a higher risk of RCCs than DEL and M mutations. Ong et al. had also reported that nonsense and frameshift mutations had a higher age-related risk of RCCs and hemangioblastomas than M mutations in VHL patients from the United Kingdom [26]. Gallou et al. had found mutations located in Missense Cluster Regions MCR-1 (residues 74–90) and MCR-2 (residues 130–136) were associated with an increased risk of RCCs in French VHL patients [41]. However, no difference in RCC risk between M mutations within and outside these MCR regions was found in our work nor the study of Ong et al. Some authors have proposed that mutations causing HIF deregulation led to the pathogenesis of RCCs in VHL disease [30] while others have theorized that mutations in the Elongin C binding domain might disrupt p53 binding causing apoptosis suppression and RCC development [31]. It has not been clear why NSS mutations confer a higher risk of RCCs than DEL or M mutations. NSS mutations may result in an aberrant gene product with a retained HIF binding site, but not a functional Elongin C binding site. Such a mutant protein may bind to HIF with a higher avidity compared to wild-type pVHL while simultaneously losing its ability to interact with p53 via Elongin C. This theory may explain the higher risk of RCCs in patients with NSS mutations.

In conclusion, we have investigated genotype-phenotype correlations in a large cohort of Chinese patients with VHL disease and report that mutation types, mutation regions and specific mutated codons serve as VHL phenotypic predictors. These results may prove useful for genetic counseling and targeted screening of patients with VHL disease. Additionally, these results provide a framework moving forward for future investigation into genotype-phenotype correlations for VHL and other tumor predisposition syndromes.

In this retrospective cohort study, we included all the VHL patients diagnosed at Peking University First Hospital (Beijing, China) prior to June 1 2016. A total of 291 patients from 115 different families were included for analysis. Individuals were diagnosed as patients with VHL if they carried a VHL germline mutation (n = 198) and/or fulfilled the clinical VHL criteria (n = 255) [4, 6, 19]. VHL mutation confirmation was verified in at least one patient of each family. The VHL status of family members who had not been verified by genetic testing was based on clinical criteria as obtained through interviews with patients, family members and medical record review. Of the included patients, 90.7% (264 of 291) harbored at least one VHL manifestation while the rest were asymptomatic mutation carriers. Follow up was determined from the time of first clinical presentation confirmed on imaging for symptomatic patients or the time of genetic diagnosis of VHL for asymptomatic mutation carriers to death or June 1 2016. Medical charts, radiographic and histological records on all affected individuals and on asymptomatic individuals who were proven VHL mutation carriers were subsequently reviewed to determine age at first diagnosis of the five major VHL lesions: CHB, RA, RCC (RCC or combined RCC and renal cysts), PCT (pancreatic cysts or combined cysts and tumors), and PHEO.

This project was approved by the Medical Ethics Committee of Peking University First Hospital (Beijing, China) and informed consent was obtained from patients or legal guardians.