Benzene, a significant organic solvent and industrial raw materials, widely exists in the production environment and living environment, especially in developing countries [1]. Currently, workers exposed to benzene in China are more than 50 million. People may arise dizziness, nausea, coma, organ (e.g., liver and kidney) failure, or an occurrence of blood diseases if an excessive amount of benzene is inhaled over a short period [2, 3]. Long term exposure of benzene can cause chronic benzene poisoning, damage to the human hematopoietic system, or even hematologic malignancies such as leukopenia, regeneration barrier anemia and leukemia [4-11]. In 1982, IARC formally designated benzene to be a human carcinogen. Although many domestic and foreign scholars have made a lot of research, but the mechanism of benzene poisoning is not completely clear. Meanwhile, there is no effective treatment on benzene poisoning. At present, there is still lack of a useful marker for benzene health care and risk screening.

In recent years, more and more non-coding RNA (ncRNA) have been indicated to play an important role in the occurrence and development of many complex diseases [12-18]. And lncRNAs are used as markers of many diseases [19]. For example, the abnormal expression of lncRNA-MALAT1 is seemed as a new biomarker of cadmium toxicity [20]. Furthermore, lncRNA-MALAT1 has been used as a marker to detect prostate cancer [21] and an application of lncRNA-MALAT1 as a marker of blood molecular markers for disease diagnosis [22]. All these evidences suggest that lncRNAs may be a potential marker in many processes of diseases.

In this study, in order to investigate the role and mechanism of lncRNA-OBFC2A in the toxicity of benzene, we first observed the expression of lncRNA-OBFC2A and proliferation related genes in benzene-exposed workers. Then we used a series of detecting measures to explore whether lncRNA-OBFC2A was involved in benzene toxicity by constructing the lentiviral interference model and RNA-FISH assay in AHH-1 cells treated with benzene final metabolites 1, 4-BQ. 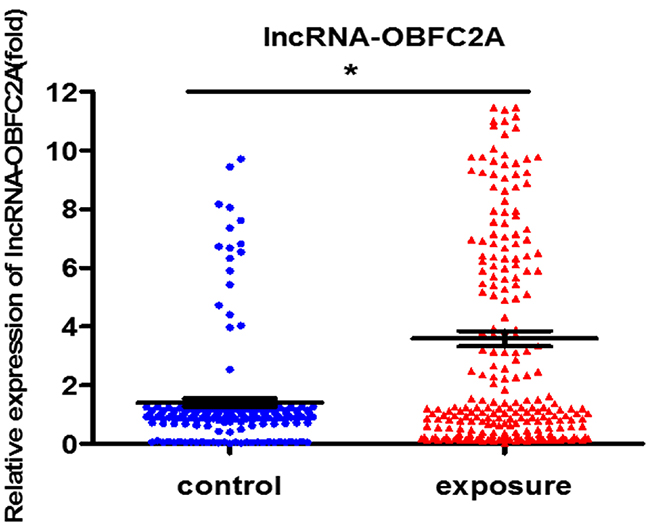 Figure 2: The cell proliferation-related genes expression markedly changed in benzene-exposed workers. The expression of NOTCH1 (A) and KLF15 (B) were analyzed by qRT-PCR. *P<0.05, compared with control. Data are expressed as mean ± S.D.; N=50.

Firstly, we chose the metabolites of benzene 1, 4-BQ to evaluate the possible toxicity of benzene in AHH-1 cells and cell viability was determined after exposing cells to 1, 4-BQ (0, 10, 20 and 40 μM) for 24 h. As indicated in Figure 4, viability of AHH-1 cells induced by 1, 4-BQ was significantly lower than that of control. The viability of 20 μM group was 82.11% while 40 μM group was 55.12%. Our results suggested that 1, 4-BQ induced cytotoxicity in a dose-dependent manner. 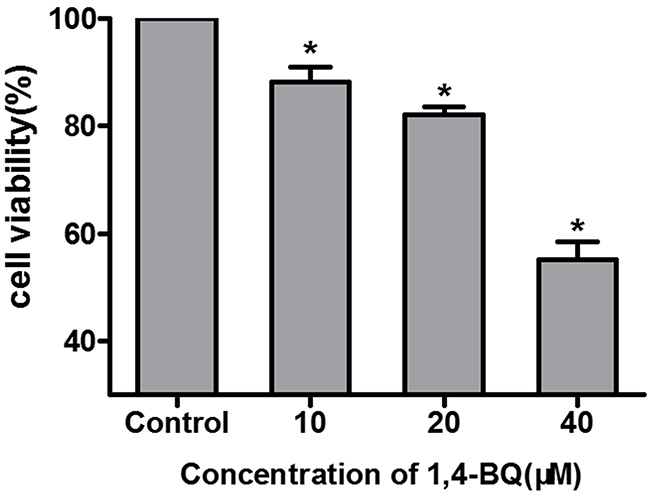 Figure 4: Cytotoxicity of AHH-1 cells induced by 1, 4-BQ. Cell viability of AHH-1 cells was measured by an MTT assay after 24 h exposure with different concentrations of 1, 4-BQ. *P<0.05, compared with control group. Data are expressed as means ± S.D. n=3.

Cell proliferation was inhibited by 1, 4-BQ 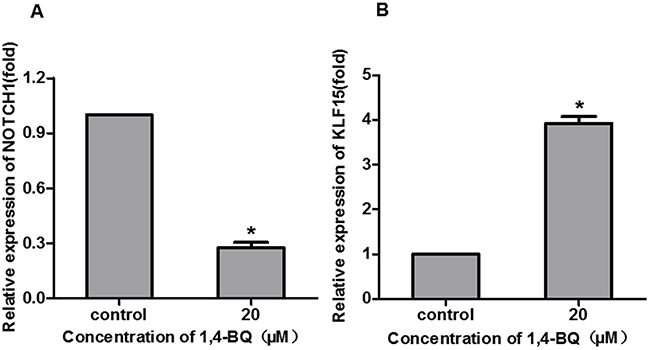 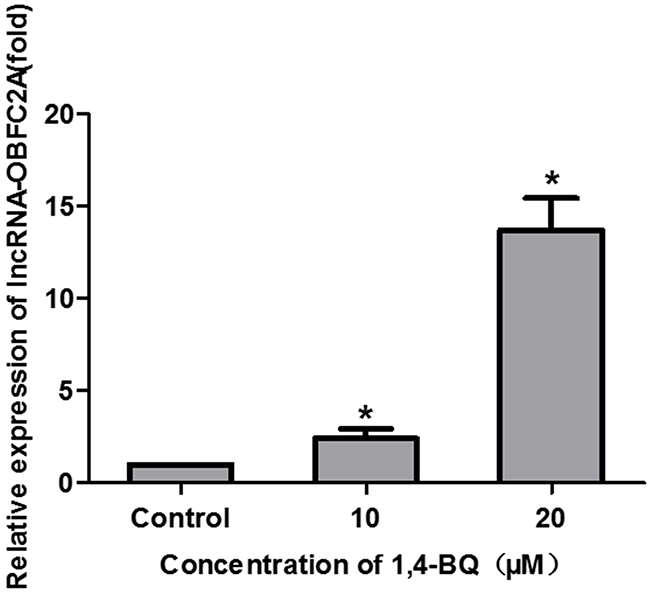 Down-regulation of lncRNA-OBFC2A was achieved through lentivirus vector transfection

Subsequently, we treated the transfected AHH-1 cells with 1, 4-BQ for 24 h. The proliferation of AHH-1 cells was detected by EdU technique. Results in Figure 9A showed that the fluorescence intensity of EdU in the experimental group was significantly stronger than that in the control group. From Figure 9B, we observed that compared with the corresponding concentration group before transfection, the cell proliferation rate increased obviously in both 10 μM group and 20 μM group, suggesting that interfering with lncRNA-OBFC2A expression can alleviate the inhibition of 1, 4-BQ-induced cell proliferation in AHH-1 cells. 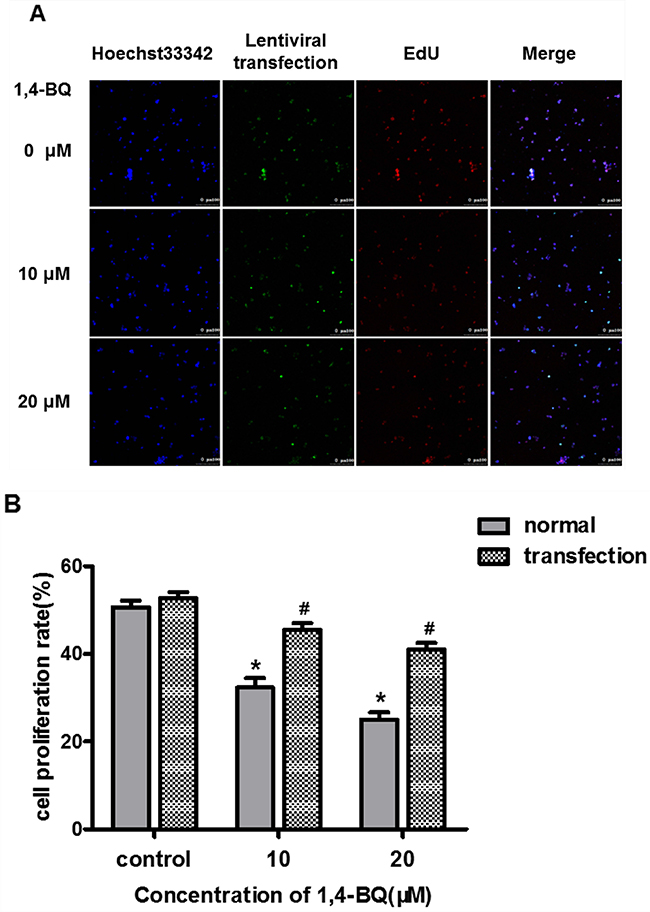 Figure 9: Effect of interfering lncRNA-OBFC2A on cell proliferation induced by 1, 4-BQ. (A) The blue fluorescence indicates the nucleus of living cells which were dyed by hoechst33342; Green indicates the slow virus transfection fluorescence; The red fluorescence indicates the DNA of cells are being copied and the last is the superposition of the former three; (B) The expression of lncRNA-OBFC2A after down-regulating was detected by real-time RCR. *p<0.05, compared with the control group (normal cells). #p<0.05, compare with the transfected-control group. Data are expressed as mean ± SD; n=3.

The expression of proliferation genes caused by 1, 4-BQ was reversed after interfering lncRNA-OBFC2A 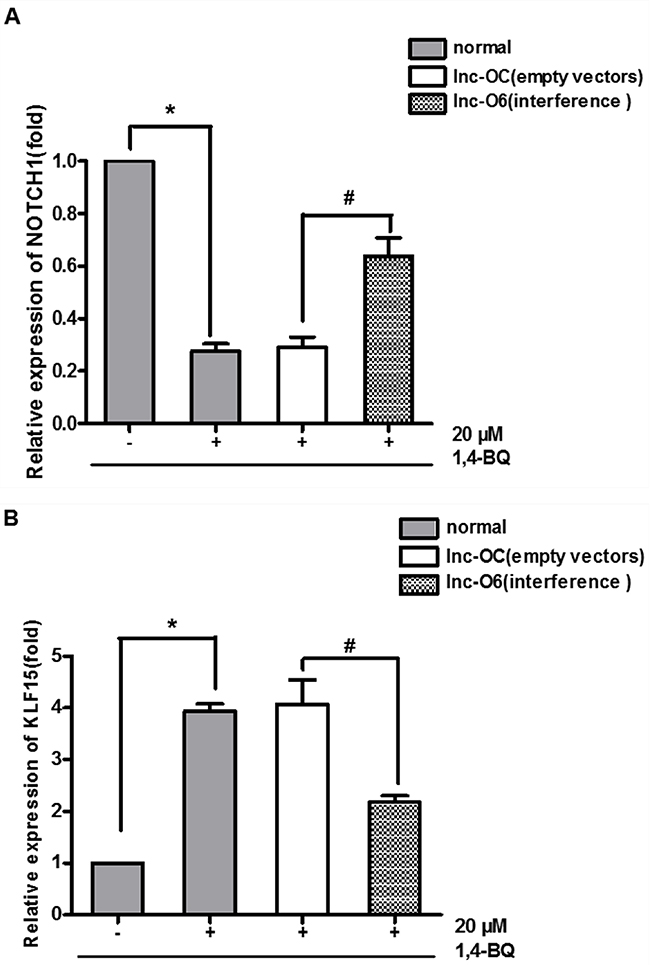 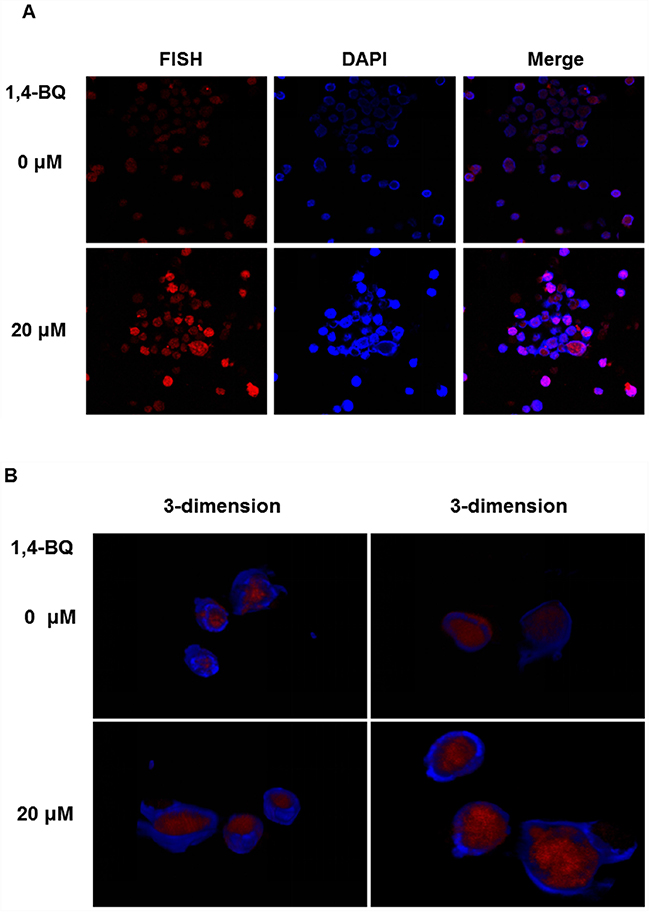 Cell proliferation is an important life characteristic of living organisms, which including a series process of cell division as DNA replication, RNA transcription and protein synthesis of the complex reaction and DNA replication in nuclear is one of the most important part in the whole process [34].

While there are numerous other genes that control cell proliferation, NOTCH1 and KLF15 were very mature and classical genes in cell proliferation studies especially in the area of tumor investigation. The Notch1 signaling pathway regulates many fundamental processes essential for normal development such as the control of cell differentiation, survival, proliferation, and angiogenesis [38]. And it plays a key role in tumor progression of several human cancers [39]. Jinhuang Chen et al. found that PDGF-D positively regulated the expression of Notch1 in CRC cells. Moreover, restoration of Notch1 rescued the inhibition of cell proliferation, migration, and invasion in SW480-shPDGF-D cells [40]. Besides, Konishi J et al. showed that inhibition of Notch signaling by a γ-secretase inhibitor suppresses the growth of non-small cell lung cancer (NSCLC) [41]. Accumulating evidence suggests that Notch signaling plays a critical role in the development of several types of cancer, functioning as a tumor promoter [44-52]. NOTCH1 has been shown to be a gene that promotes cell proliferation [53, 54]. Knocking-down NOTCH1 inhibited cell proliferation of ICC cells and glioma cells [55-57].

Above results indicated that lncRNA-OBFC2A participated in the process of cell proliferation by regulating the expression of NOTCH1 and KLF15. In order to make it clear that where does lncRNA-OBFC2A work, we measured it by Fluorescence in situ Hybridization (FISH) [52]. FISH was widely used in conjunction with banded chromosome analysis, and as a stand-alone technique for the detection of genomic alterations in neoplastic disorders [53]. Besides, FISH can be used to detect the specific existence sequence of DNA or RNA in cells and for genetic markers, chromosomal aberrations, chromosomal location of genes [54]. The cell specific probe fluorescence intensity can represent the localization and quantity of the goal RNA. Our results showed that the fluorescence intensity of experimental group was higher than that of control, indicating that lncRNA-OBFC2A was localized in the nucleus to take effect.

Taken together, lncRNA-OBFC2A regulates the expression of proliferation- related genes NOTCH1 and KLF15 in cell nuclei, which affects the cell proliferation inhibition induced by 1, 4-BQ. And LncRNA-OBFC2A can be seemed as a promising biomarker for benzene toxicity in the early stage of benzene exposure.

In this study, 50 workers were exposed to 3.50±1.60 mg/m3 concentration of air benzene and 50 controls who were exposed to 0.06±0.01 mg/m3 air benzene [33]. Each participant was required to fill a questionnaire including demographic, life-style and occupational information, such as age, gender, medications history, smoking history, drinking history and family history of health status. The study was approved by the Committees for Ethical Review of Research involving Human Subjects of Capital Medical University. All participants provided the written informed consents.

The human normal lymphocyte line (AHH-1) was given as a gift by the National Institute for Radiological Protection, China CDC (Chinese Center for Medical Response to Radiation Emergency). The cells were cultured at 37°C in 5% CO2 humidified environment, and maintained in RPMI Medium 1640 basic (RPMI-1640) (Gibco, USA) supplemented with 10% donor equine serum (HyClone, USA), 100 U/mL penicillin, and 100 μg/mL streptomycin. For tests, the cells were seeded into 6-well plates at a density of 1×106 cells/mL and allowed to attach for 24 h, then treated with 1, 4-BQ (0, 10, 20 and 40 μM ) for 24 h. The equivalent volume of RPMI-1640 without 1, 4-BQ was used as control group.

Ethynyl-2’-deoxyuridine incorporation assay was performed using an EdU Apollo DNA in vitro kit (KeyGEN, China) following the manufacturer’s instructions. Briefly, single cell suspension was prepared from the cells in the logarithmic growth phase. And about 1×106 cells/mL AHH-1 cells were seeded into a 96-well plate with various concentrations (0, 10 and 20 μM) of 1, 4-BQ at 37 °C for 24 h. Then the cells were suspended liquid moved to 2 mL EP tube, 1500 r/min, 5 min centrifuged supernatant, each hole added 1mL 1×EdU working solution, and incubated at room temperature for 2 h, then discard the working solution, each hole incubated with 0.5 mL reaction mixture for 30 min at room temperature in the dark. The samples were washed before being observed under fluorescence microscopy. Laser confocal microscope was used to detect the proliferation.

Lentivirus vectors were constructed in Genechem (Shanghai, People’s Republic of China). These lentivirus vectors contain a target gene (lnc-O6) or empty lentiviral vectors (lnc-OC) and a green fluorescent protein marker. Single cell suspension was prepared from the cells in the logarithmic growth phase. To generate stable clones, 1×105 cells/mLAHH-1 cells were seeded into a 6-well plate. Afterwards, 5×106 transducing units of lentivirus with 500 μL of enhanced infection solution and polybrene (5μg/mL) were mixed to infect AHH-1 cells. And we observed the situation of green fluorescent protein marker after 72 h for detecting infection efficiency by the fluorescence microscope (OLYMPUS, Japan).

The location of lncRNA-OBFC2A in AHH-1 cells was detected by RNA fluorescence in situ Hybridization (RNA-FISH). Cells were fixed in 4% poly formaldehyde for 30 min at room temperature, then the sample was dehydrated with increasing concentrations of ethanol (70%, 85% and 100%). Coverslips were incubated and hybridized overnight with the RNA-FISH probes in a humidified environment at 37 °C and dyed the nucleus with DAPI. The fluorescence was measured by a laser scanning confocal microscope (Leica, Germany).

Data were expressed as mean ± S.D. of three independent experiments, and significance was determined by using one-way analysis of variance (ANOVA) followed by least significant difference (LSD) test to compare the differences between groups. In all cases, P<0.05 was considered to be statistically significant.

1. Khalade A, Jaakkola MS, Pukkala E, Jaakkola JJ. Exposure to benzene at work and the risk of leukemia: a systematic review and meta-analysis. Environmental health: a global access science source. 2010; 9:31.

8. Atkinson TJ. A review of the role of benzene metabolites and mechanisms in malignant transformation: summative evidence for a lack of research in nonmyelogenous cancer types. International journal of hygiene and environmental health. 2009; 212:1-10.