Long non-coding RNAs (lncRNAs) are a group of RNA transcripts that exceed 200 nt in length yet lack significant open reading frames (ORFs) [1]. They regulate gene expression through transcriptional, post-transcriptional and epigenetic effects [2-8]. Tens of thousands of lncRNAs have been identified in the human genome [9], many of which are abnormally expressed in a variety of human tumors, and are involved in various stages of carcinogenesis, including tumor initiation, progression and metastasis [10-17]. However, the function of the vast majority of these lncRNAs is still unclear.

In a previous study, we performed gene expression profile (GEP) analysis by microarray and found that one lncRNA named actin filament-associated protein 1 antisense RNA1 (AFAP1-AS1) was significantly upregulated in nasopharyngeal carcinoma (NPC), and promoted invasion and metastasis of cancer cells by regulating the expression of several small GTPase family members and molecules in the actin cytokeratin signaling pathway [18]. However, it is not yet known whether there is any other biological function of AFAP1-AS1 in the tumorigenesis of NPC.

The Gene Expression Omnibus (GEO) database [19] is a public gene expression data repository that serves as a valuable data repository for biomedical research and has collected a large amount of gene expression data for data mining [20]. Mining of published high-throughput data is a commonly used and low-cost method for identifying novel biomarkers and gaining insight into the biological functions of novel genes [21-23]. To identify potential novel functions of AFAP1-AS1, we downloaded a GEP dataset, GSE12452, from the GEO database; this dataset consists of 41 samples of whole-genome GEP data, including 10 samples of non-tumor nasopharyngeal epithelial (NPE) biopsies and 31 cases of NPC [24]. We found that there were 4196 differentially expressed genes in the GSE12452 dataset. Among these differentially expressed genes, AFAP1-AS1 was highly expressed in NPC cells and was positively correlated with the expression of PD-1, a key molecular marker of tumor immune evasion (Figure 1, P=0.05). 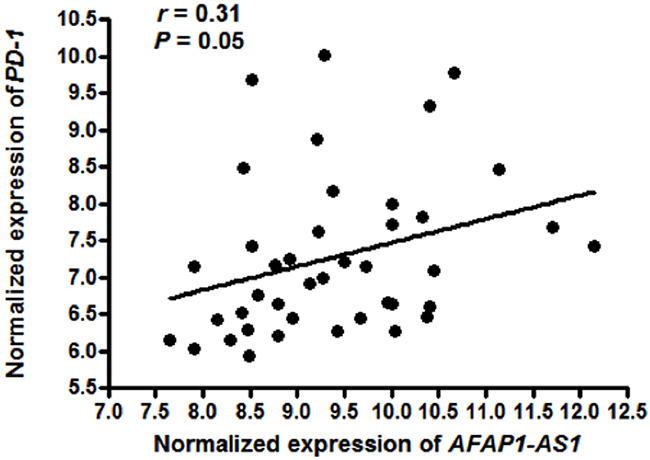 Since PD-1 is a membrane protein and mainly expressed on the lymphocyte cell surface [25]; and tumor-infiltrating lymphocytes are associated with the development and progression of NPC [26]. we set out to assess AFAP1-AS1 and PD-1 expression in a cohort of 96 paraffin-embedded NPC samples via in situ hybridization and immunohistochemical staining, respectively (Supplementary Table 1). Expression of AFAP1-AS1 was absent or very low in adjacent non-tumor NPE (Figure 2A) but high in NPC cells and infiltrating lymphocytes in 68 of 96 cases (70.8%, Figure 2B). Similarly, the expression of PD-1 was low or negative in non-tumor NPE (Figure 2C) but high in infiltrating lymphocytes surrounding NPC cells (36 of 96 cases, 37.5%, Figure 2D). 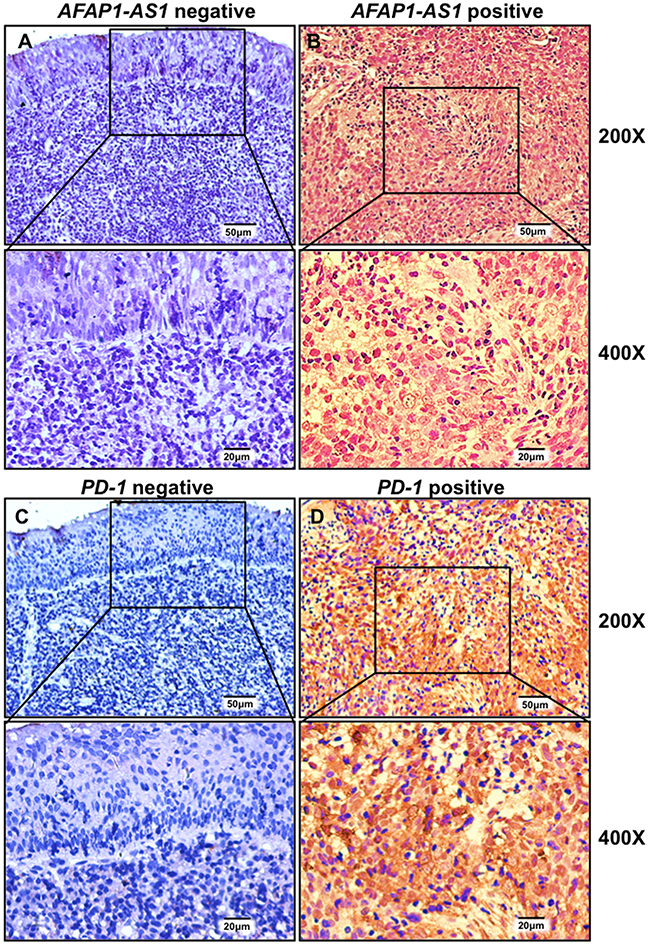 We then analyzed the correlation between the expression of AFAP1-AS1 and PD-1 and clinicopathological features of these 96 NPC patients. There was no significant correlation between the expression of AFAP1-AS1 or PD-1 and patients’ gender, age at diagnosis, tumor size (T stage), lymphatic invasion (N stage), distant metastasis at diagnosis (M stage) and overall clinical staging (Supplementary Table 2), but patients with high expression of AFAP1-AS1 or PD-1 in NPC-infiltrating lymphocytes were more likely to have distant metastasis when they relapsed (Figure 3A and 3B, P=0.005 and P=0.020, respectively). 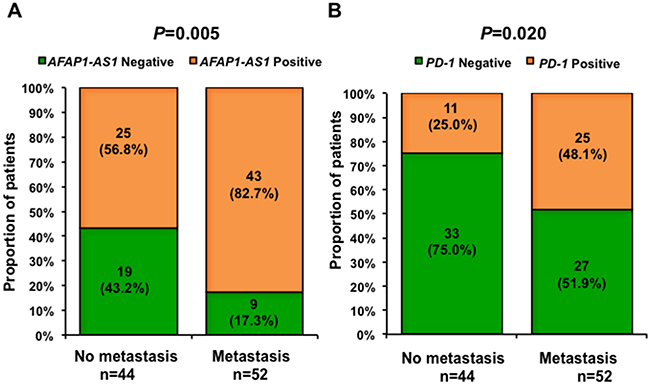 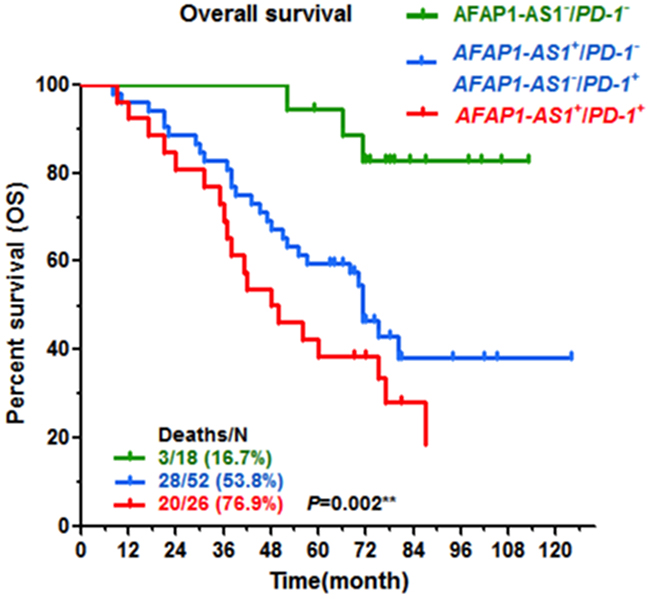 NPC is an Epstein-Barr Virus (EBV)-associated malignancy and is the most common malignant head and neck tumor, originating in the nasopharyngeal epithelium [27-31]. High incidences of NPC are observed in Southeast Asia and southern China, resulting in serious healthcare problems in these regions [32-34]. NPC is highly metastatic and heterogeneous compared with other head and neck tumors [35-40]. Radiotherapy has been used as the primary clinical treatment for all stages of NPC over the past several decades, but many patients eventually die due to recurrence and distant metastasis [41-43]. Although recent studies have shown that induction chemotherapy plus concurrent chemoradiotherapy significantly improves failure-free survival in locally or regionally advanced NPC with acceptable toxicity, long-term efficacy and toxicities remain unclear [44]. Management of advanced NPC is therefore a highly challenging issue, and novel and effective therapies for NPC are urgently needed.

Recently, tumor immune evasion has emerged as a hallmark of cancer progression [45-47]. Immune surveillance is an important mechanism in preventing the development of cancer and inhibiting tumor growth and metastasis [48-50]. There are many immunosuppressive mechanisms in the tumor microenvironment that can decrease the activity of tumor-infiltrating lymphocytes and increase the risk of tumor metastasis and recurrence [51]. Among these mechanisms, T cell-mediated immune responses, especially CD8+ cytotoxic T lymphocytes, play an important role in tumor immunity [52, 53].

PD-1 is a transmembrane receptor that is mainly expressed on T cells. It was first cloned in T cell hybridomas and was named “programmed death receptor” because of its involvement in T cell apoptosis [25]. In tumor tissues, PD-1 is mainly expressed in tumor-infiltrating lymphocytes (TILs) [54, 55]. High expression of PD-1 in TILs led to depletion and deactivation of T cells [56-60]. PD-1 also interacts with programmed death ligand-1 (PD-L1) and programmed death ligand-2 (PD-L2), which are mainly expressed on the surface of tumor cells or in the tumor matrix [61, 62]; these ligands activate PD-1, which then inhibits the proliferation of T cells and promotes the immune escape of tumor cells, playing an important role in immune suppression and cancer progression [63-65]. The blockade of immune checkpoints has been the most promising approach to activating antitumor immunity. A tumor immunotherapy treatment strategy using a combined PD-1/PD-L1 antibody has entered the stage of clinical trials and shown good performance [66, 67].

It has been reported that local infiltration of T cells is a favorable indicator of survival in NPC patients, but many studies have indicated that NPC can escape immune surveillance through various mechanisms [68-75]. Recent studies have shown that NPC has high levels of PD-L1 and PD-1, indicating that NPC may be a candidate for PD-1/PD-L1-dericted therapies [76-78]. However, the underlying mechanism of PD-1 regulation in NPC is undetermined.

In conclusion, to our knowledge, this is the first study to explore the co- expression of a lncRNA, AFAP1-AS1, and an immune escape marker, PD-1, in tumor-infiltrating lymphocytes among NPC patients, as well as their synergistic effect on prognosis. This study provides two potential therapeutic targets for NPC, AFAP1-AS1 and PD-1, to inhibit tumor metastasis and stimulate anti-tumor immunity. Patients with higher expression of both AFAP1-AS1 and PD-1 might be ideal candidates for future clinical trials of anti-PD-1 therapy. Our study is limited by its retrospective nature, with a relatively small sample size. Further studies with larger sample sizes are warranted.

In situ hybridization was performed to detect the expression of AFAP1-AS1 in tissue specimens using three 30-nucleotide probes from different regions of AFAP1-AS1. GAPDH was used as a positive control. The probe sequences were as follows.

The probes were synthesized and labeled with DIG-dUTP at the 3’ end using a kit from Invitrogen (Shanghai, China) [82-84]. The in situ hybridization results were independently scored manually by two pathologists who counted 20 sequential high-power fields judged to be representative of the tumor, while remaining blinded to clinical information.

Paraffin-embedded sections (3 μm) were used for PD-1 staining. Paraffin sections were dewaxed using turpentine and gradient alcohol, immersed in 3% H2O2 at room temperature for 10 min and then treated with citric acid buffer [85, 86]. Staining for PD-1 (Proteintech, Wuhan, China) was observed under the microscope. Samples were divided into a PD-1-negative group and a PD-1-positive group by double-blind scoring by two pathologists.

Pearson correlation analysis was used to evaluate the expression levels of AFAP1-AS1 and PD-1. The Chi-squared test was used to evaluate the expression of AFAP1-AS1, PD-1 and clinicopathological features such as gender, age at diagnosis, TNM staging, and metastasis, among others. Survival analysis was performed using the Kaplan-Meier test. A threshold of P<0.05 was used to indicate statistical significance, and all tested P values were two-sided. Statistical analysis was performed using SPSS 13 and GraphPad 5 software

The authors declare that there are no conflicts of interest in this work.