Aim of the study: This study aims to determine the genetic cause of PRS.

Results: The reciprocal translocation t(4;6)(q22;p21) was identified to be segregated with PRS in a three-generation family. Whole-genome sequencing and Sanger sequencing successfully detected breakpoints in the intragenic regions of BMRP1B and GRM4. We hypothesized that PRS in this family was caused by (i) haploinsufficiency for BMPR1B or (ii) a gain of function mechanism mediated by the BMPR1B-GRM4 fusion gene. In an unrelated family, we identified another BMPR1B-splicing mutation that co-segregated with PRS.

Conclusion: We detected two BMPR1B mutations in two unrelated PRS families, suggesting that BMPR1B disruption is probably a cause of human PRS.

Pierre Robin sequence (PRS, MIM: 261800), also known as Pierre Robin syndrome, is a condition characterized by micrognathia, cleft palate, and glossoptosis (leading to airway obstruction and eventually develops into chonechondrosternon) [1-3]. Most neonates with PRS have respiratory and feeding difficulties [1-3] (Supplementary Video 1 shows a typical video of a patient with PRS). PRS is also a subgroup of cleft lip and/or cleft palate, which are among the most common birth defects worldwide occurring at a rate of 1 to 2 per 1000 births [4]. PRS can be isolated or can be a part of several disorders, such as Stickler syndrome, velocardiofacial syndrome, fetal alcohol syndrome, and Treacher Collins syndrome [5, 6].

Several gene intervals of 2q24.1-33.3, 4q21-qter, 11q21-23.1, and 17q21-24.3 are associated with PRS [3]. Many studies have identified translocation breakpoints and mutations in the conserved and non-coding elements of SOX9 in patients with PRS; results illustrated that SOX9 disruptions are involved in PRS [7, 8]. 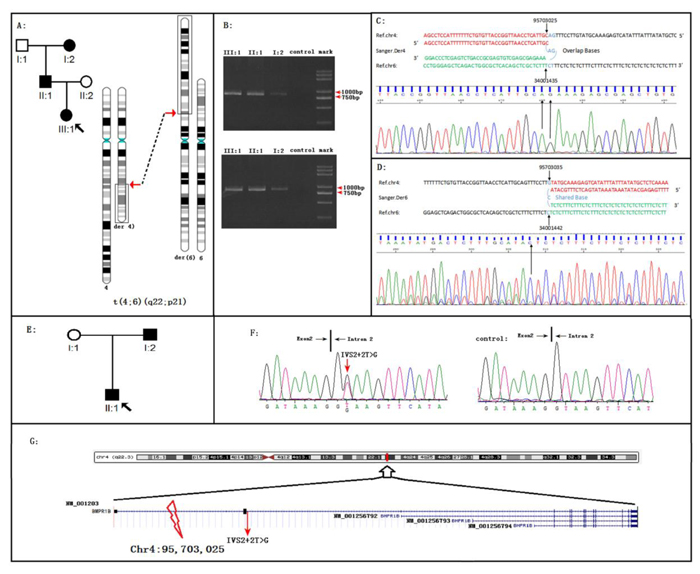 In family 01, WGLCS was successfully conducted on all three affected members. Both der (4) and der (6) breakpoints were successfully detected and confirmed immediately by Sanger sequencing (Figure 1b-1d). We also detected the same breakpoints on all three affected members, suggesting that the 4q22 and 6p21 translocations were steadily transmitted in family 01 with PRS (Figure 1b-1d, Supplementary Figure S2, and Supplementary Figure S3). At 4q22, the breakpoint occurred on Chr4: 95,703,025 (Figure 1c, Supplementary Figure S2, and Supplementary Figure S3). Thus, the BMP receptor type 1B (BMPR1B) gene was truncated by fusing the first intron of BMPR1B (NM_001203) to 6p21 at Chr6: 34,001,435 in the eighth intron of GRM4 (Figure 1g and Supplementary Figure S4). We hypothesized that two fusion genes were produced (Figure 4). In family 02 (Figure 1e), Sanger sequencing on the coding regions, namely, exon-intron boundaries of BMPR1B and GRM4, was successfully carried out. After filtering common variants present in 1000 Genomes (www.1000genomes.org), we detected a splicing mutation (IVS2+2T > G) of BMPR1B segregating with PRS in family 02 (Figure 1f). This BMPR1B-IVS2+2T > G mutation was absent in 496 regions, ethnic-matched controls, and other public databases (dnSNP, YH database, and 800 in-house exome data). 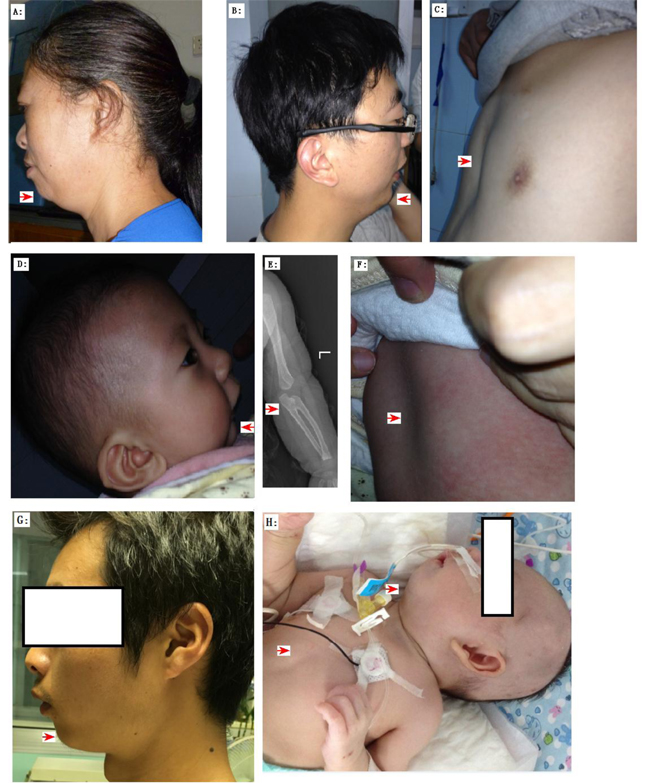 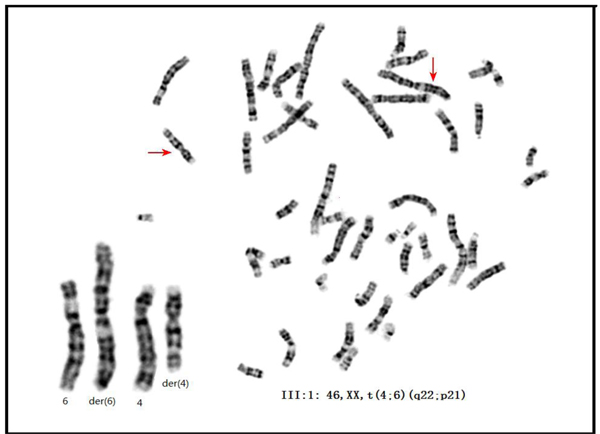 We identified the BMPR1B-GRM4 (or vice versa) fusion transcript in family 01 and find the altered BMPR1B transcripts in family 02. The PCR primer was successfully designed (Supplementary Table S1). In the analysis of cDNA template from the peripheral lymphocytes of a healthy control, both the amplified BMPR1B and GRM4 transcripts were not detected on polyacrylamide gel. Hence, BMPR1B and GRM4 were not expressed in the blood or were expressed in the blood at very low levels. BMPR1B was expressed in cartilaginous tissues. However, other informative tissues from patients belong to family 01 and 02 were unavailable. 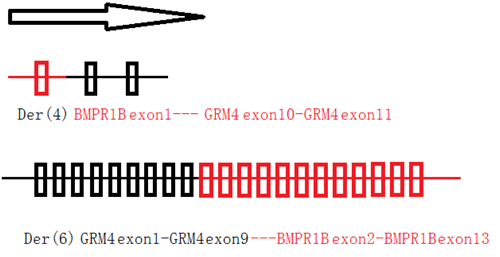 This research investigated two PRS-affected families with BMPR1B disruptions. In family 01 with reciprocal translocation, several advanced genetic techniques successfully and precisely detected the translocation breakpoints. The translocation segregated steadily with PRS through three generations in family 01. At 4q22, the breakpoint was between positions Chr4: 95, 703, 025 and Chr4: 95, 703, 028. This breakpoint interrupted the first intron of the BMPR1B gene (NM_001203) (Figure 1g). At 6p21, the breakpoint was between positions Chr6: 34, 001, 435 and Chr6: 34, 001, 436. The 6p21 breakpoint (Supplementary Figure S4) interrupted the eighth intron of GRM4 (GRM4, NM_001282847), encoding an excitatory neurotransmitter, namely, the glutamate metabotropic receptor 4. The diseases associated with GRM4 include epilepsy and schizophrenia [11]. In PRS-affected family 02, Sanger sequencing on the coding regions and exon-intron boundaries of BMPR1B or GRM4 detected a mutation (a splicing mutation IVS2+2T>G) on BMPR1B but none on GRM4.

As a BMP receptor, the human BMPR1B gene is located in 4q22. This gene induces the formation of bones and joints [23, 24] and is essential for precise BMP signaling in bone and joint morphogenesis [23, 24]. The 4q21-qter is a previously defined CL/P (or PRS) locus. At least three studies suggested the presence of CL/P disease gene [25-27], and two studies indicated the presence of PRS disease gene [2, 28] located in the 4q21-qter interval.

Previous studies reported the presence of BMPR1B mutations in patients with human joint fusion and limb deformities, including brachydactyly type A2 [29], brachydactyly type C/symphalangism-like phenotype [30], and du Pan acromesomelic dysplasia [31]. Consistently, the proband of family 01 exhibited the joint fusion phenotype, namely, radio-ulnar synostosis (RUS) (Figure 2e). RUS, a congenital joint disease [32], can either be sporadic or transmitted with the inheritance of autosomal dominant [33]. RUS is a rare phenotype of PRS [34]. In this study, we investigated another RUS family (family 03, Supplementary Figure S5a) with two members having RUS and phalangeal dysplasia or isolated RUS (Supplementary Figure S6), but without PRS phenotypes. In this family, Sanger sequencing on BMPR1B detected a missense variant that cosegregated with the disease (c.1024A > G/p.Lys342Glu) (Supplementary Figure S5b). This variant was absent in 496 region- and ethnic-matched controls and in public databases, including 1000 Genomes and 800 in-house exomes. Lysine was substituted by glutamic acid in 342 residues located in a highly conserved region of BMPR1B (Supplementary Figure S7), and three functional predicting software (PolyPhen, Sift, and MutationTaster); predict this variant can cause a disease. However, the pathogenicity of this variant remains unclear because of the following: incomplete penetrance of the family investigated and the variant was hit two times in the ExAc database. This missense mutation must be subjected to further functional analysis.

In summary, we identified two BMPR1B disruptions in two unrelated PRS-affected families. We also observed that both PRS disruptions occurred on the NM_001203 transcript of BMPR1B, and mutation occurring on other transcripts/locations did not exhibit CL/P phenotypes. These observations suggest that (i) the NM_001203 transcript may play important roles for human mandible and palate morphogenesis, and (ii) different transcripts of BMPR1B may play spatial-specific roles in human skeletal morphogenesis. This study is the first to report that BMP receptor disruption can cause human CL/P spectrum disorders.

The project was approved by the ethics committee of the Hunan Children’s Hospital, Changsha City, China. Before this study, all subjects and child guardians signed a written informed consent. This study involved two PRS families (Table 1 presents the detailed clinical data for 5 PRS members of these two families), including family 01 (Figure 1a and Figure 2a-2f) and family 02 (Figure 1g and Figure 2g-2h), and 496 ethnic- and region-matched controls. These controls have neither diagnostic features nor family history of PRS. For each subject, genomic DNA was extracted from peripheral blood (1-3 mL in heparin sodium tubes) through the phenol/trichloromethane method as described by the standard protocol.

The Giemsa banding (400-550 bands lever) was conducted on all members of these two PRS families. High resolution Giemsa banding was also carried out in these two PRS families in accordance with the standard laboratory protocol. The Agilent 4×180 K commercial arrays (Agilent Technologies, Santa Clara, CA, USA) were used to detect CNV on four affected members of PRS families (the I:2, II:1 and III:1 in family 01, Figure 1a; the II:1 of family 02, Figure 1g ). The experimental and analytical pipelines of the array conformed to the standard protocol as previously described [9].

We used whole genome low-coverage sequencing (WGLCS) to detect the breakpoints of family 01. The detailed method for WGLCS is available in a previously published paper [9].In brief, 500 ng genomic DNA for each individual was subjected to the following steps: DNA sheared into small fragments, end-repair, “A”-overhanging and adapter-ligation, fragment (about 625 bp long) selection in agarose gel electrophoresis, PCR with multiplex primers, and fragment selection in agarose gel. The Agilent Bio-analyzer DNA 1000 kit (Agilent Technologies) was used to determine the size distribution of the library. The library concentration was measured by quantitative PCR, and libraries with index tags were sequenced by Illumina HiSeq 2000 platform. Data analysis was performed through the following steps: (1) removal of the reads of adaptors and low-quality reads; (2) alignment of the reads to hg19 or GRCh37.1; and (3) translocation discovery, chimeric read-pair inputs for T-CHR (an in-house software [10]), analysis of clustering by locations, removal of PCR duplicates, and four steps of filtration [10].

Sanger sequencing was performed on the basis of the following experiments: (i) the detection of breakpoint regions for family 01, and (ii) the mutation scanning of the exon and exon/intron junctions of the BMPR1B (NM_001203) and the GRM4 (NM_001282847) gene in family 02. The primers were designed using the software Primer3 (http://frodo.wi.mit.edu) and were synthesized by local biotech company. Primer sequences and the PCR conditions are available on request. The BigDye 3.1 Mix Kit (Applied Biosystems, Foster City, CA) was used for all seq reactions. Dye-labeled PCR products were purified in 70% alcohol and electrophoresed on an ABI 3500 genetic analyzer (Applied Biosystems, Foster City, CA). All the sequencing data were analyzed using the SEQMAN software (DNA Star Package, WI, USA).

For the detection of fusion-genes (in family 01) or to value the effect of the splice site variant (in family 02), PCR primers were synthesized (Supplementary Table 1).

The authors are grateful to the families who participated in this study.

The authors declare no conﬂicts of interest.