The associations between the MAPT polymorphisms and Alzheimer’s disease risk: a meta-analysis

One of the neuropathological hallmarks of Alzheimer’s Disease (AD) is the neurofibrillary tangle, which contains paired helical filaments (PHFs) composed of hyperphosphorylated forms of the microtubule-associated protein tau (MAPT) by mechanism which is not illustrated [1]. Increasing attention has been paid to endogenous and exogenous factors, as well as genetic risk factors contributing to the incidence of AD [2], stimulating the disease progression of AD [3]. It was believed that the identification of key genetic determinants for AD might help further understand its underlying mechanism.

Table 1: Main characteristics of the studies included in this meta-analysis of the associations between these SNPs of the MAPT gene and AD risk. 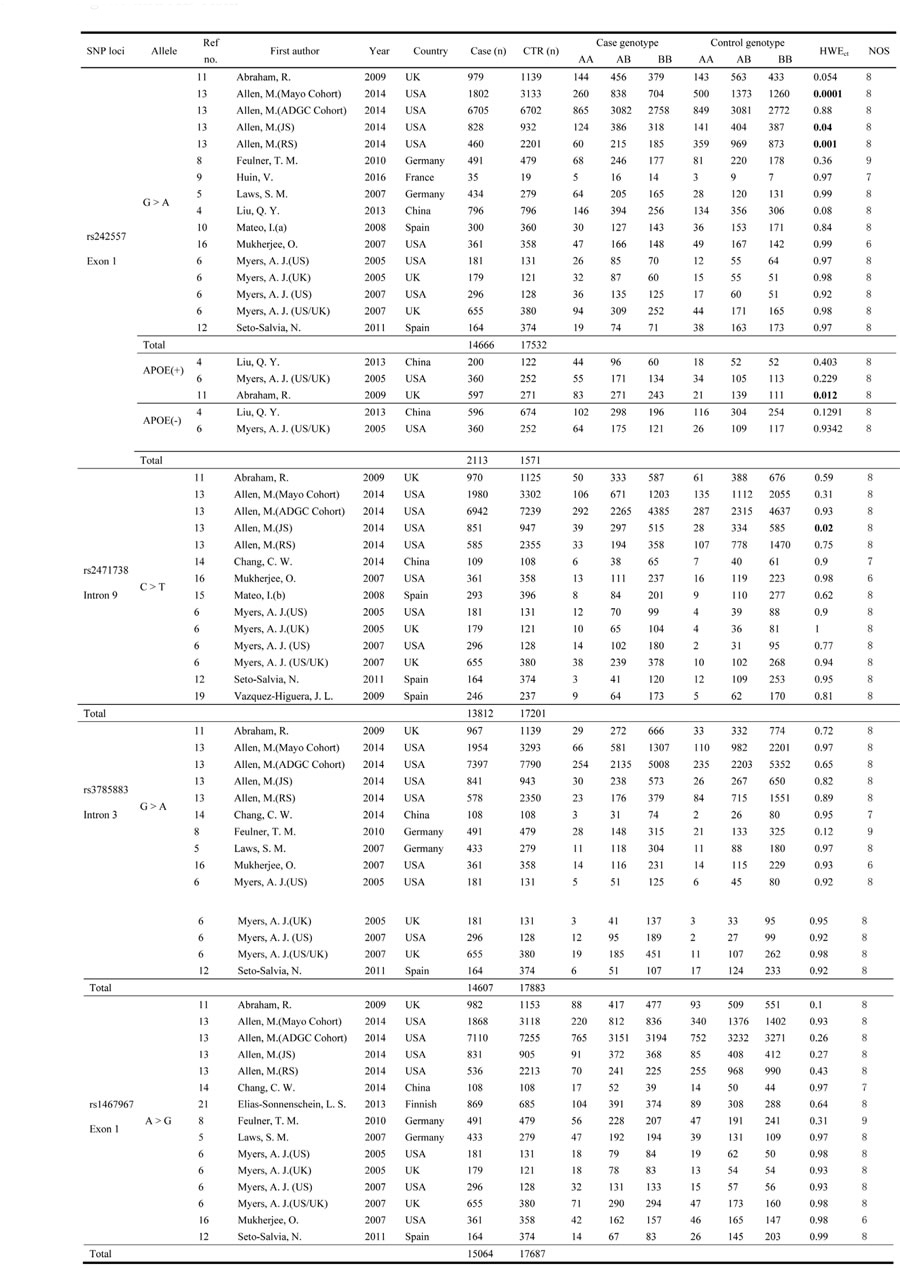 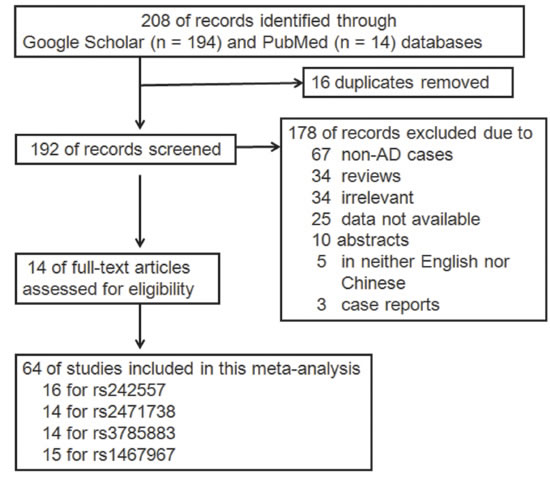 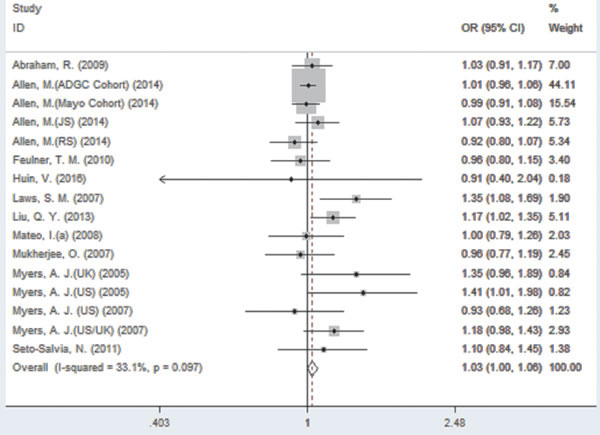 Figure 2: Forest plot for the meta-analysis of the association of SNP rs242557 and AD risk under the allelic model (A vs. G). 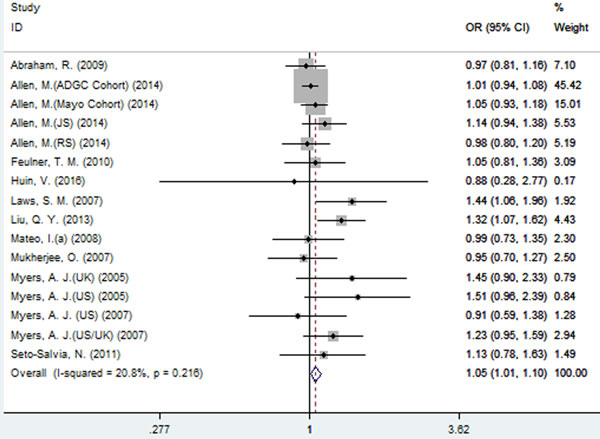 Figure 3: Forest plot for the meta-analysis of the association of SNP rs242557 and AD risk under the dominant model (AA + AG vs. GG). 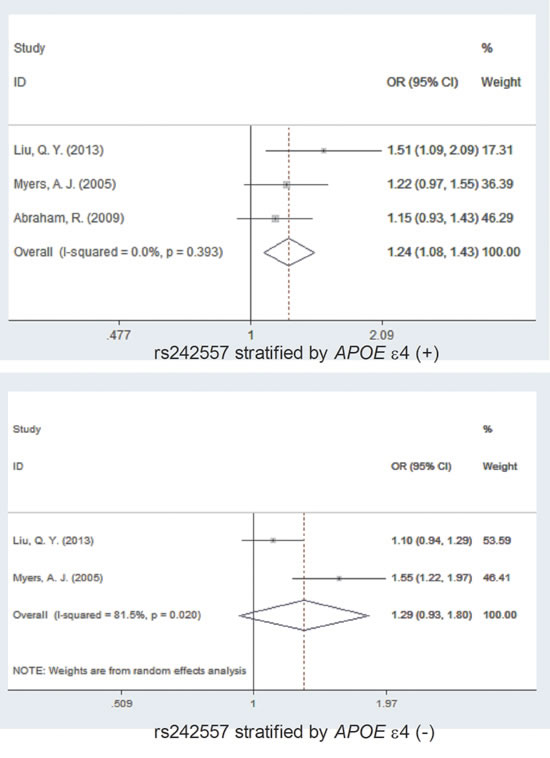 Figure 4: Forest plot for the meta-analysis of the association of SNP rs242557 and AD risk stratified by APOE ε4 allele status.

Table 3: The pooled results of the associations between these SNPs and AD risk as well as publication bias evaluation of the studies included. 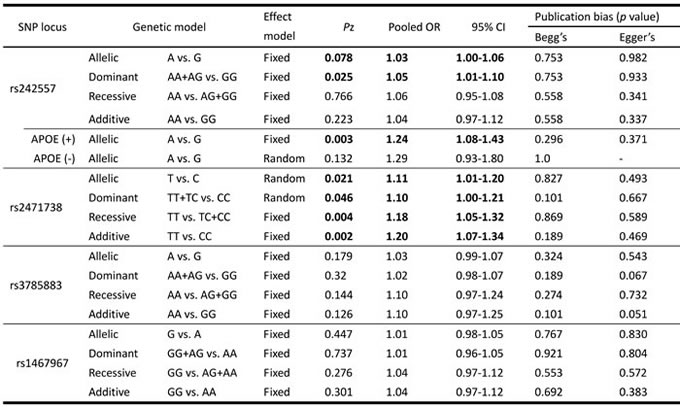 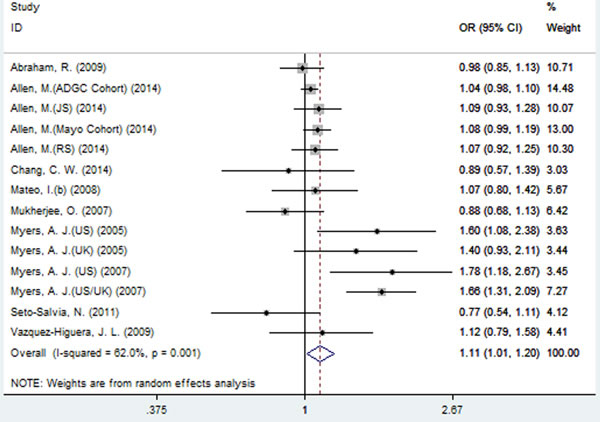 Figure 5: Forest plot for the meta-analysis of the association of SNP rs2471738 and AD risk under the allelic model (T vs. C). 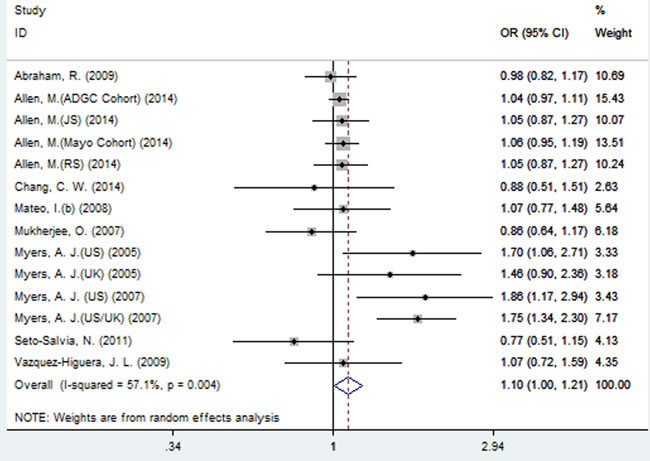 Figure 6: Forest plot for the meta-analysis of the association of SNP rs2471738 and AD risk under the dominant model (TT + TC vs. CC). 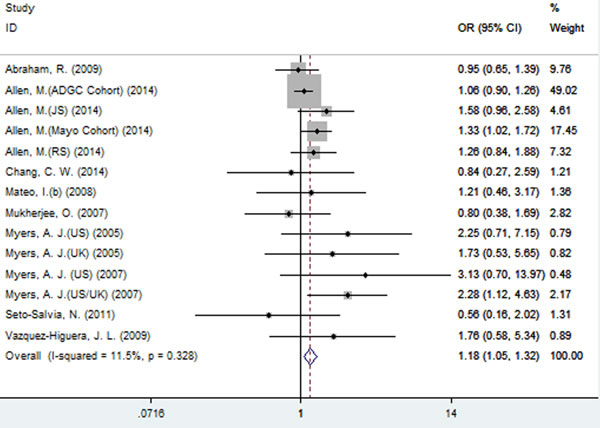 Figure 7: Forest plot for the meta-analysis of the association of SNP rs2471738 and AD risk under the recessive model (TT vs. CC + TC). 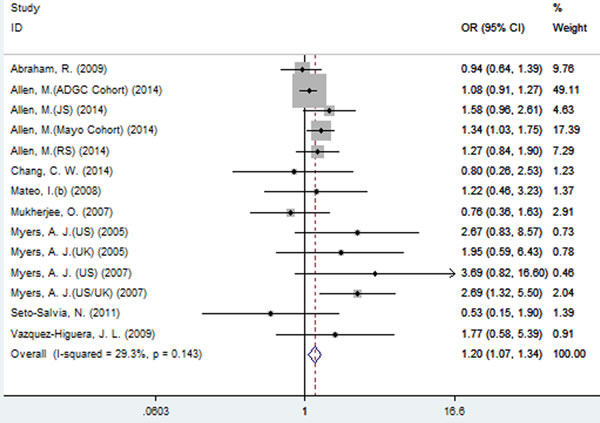 Figure 8: Forest plot for the meta-analysis of the association of SNP rs2471738 and AD risk under the additive model (TT vs. CC). 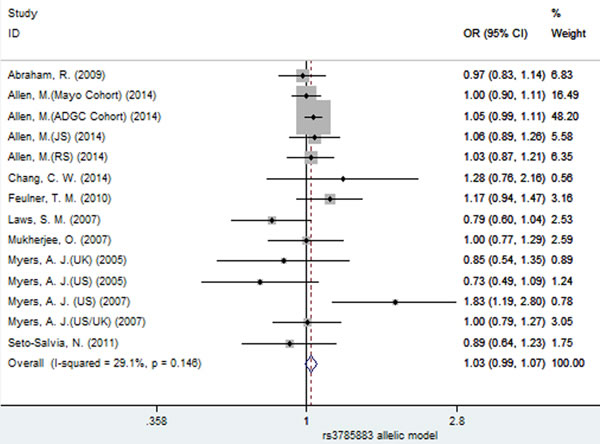 Figure 9: Forest plot for the meta-analysis of the association of SNP rs3785883 and AD risk under the allelic model (A vs. G). 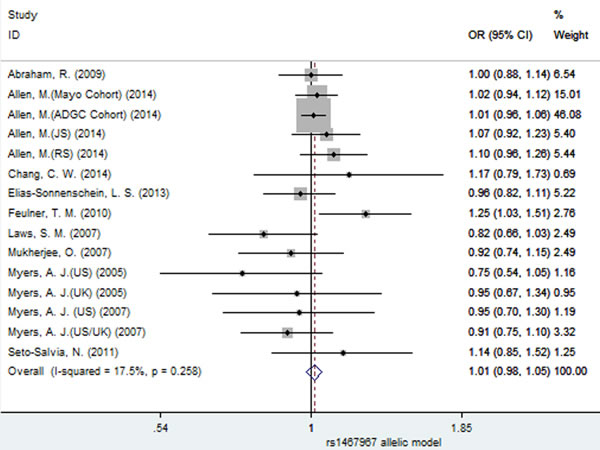 Figure 10: Forest plot for the meta-analysis of the association of SNP rs1467967 and AD risk under the allelic model (G vs. A).

Due to large heterogeneity between studies for rs2471738, we performed a sensitivity analysis by excluding a study [Allen, M. (JS), 2014; see Table 1] with departure from Hardy-Weinberg Equilibrium (HWE) in controls, we did not observe increased homogeneity across the rest studies (data not shown), suggesting that HWE deviation was not a source of between-study heterogeneity. The sensitivity analysis showed that for rs242557 and rs2471738 none of the studies included significantly changed the results under the allelic model (Figure 11A and 11B, respectively). The same results were observed for rs3785883/rs1467967 (Figure 12 A and 12B, respectively). Begg’s and Egger’s test were used to estimate the severity of publication bias with a P-value < 0.05 being considered statistically significant. No evidence of publication bias was found in any genetic model (Table 3). 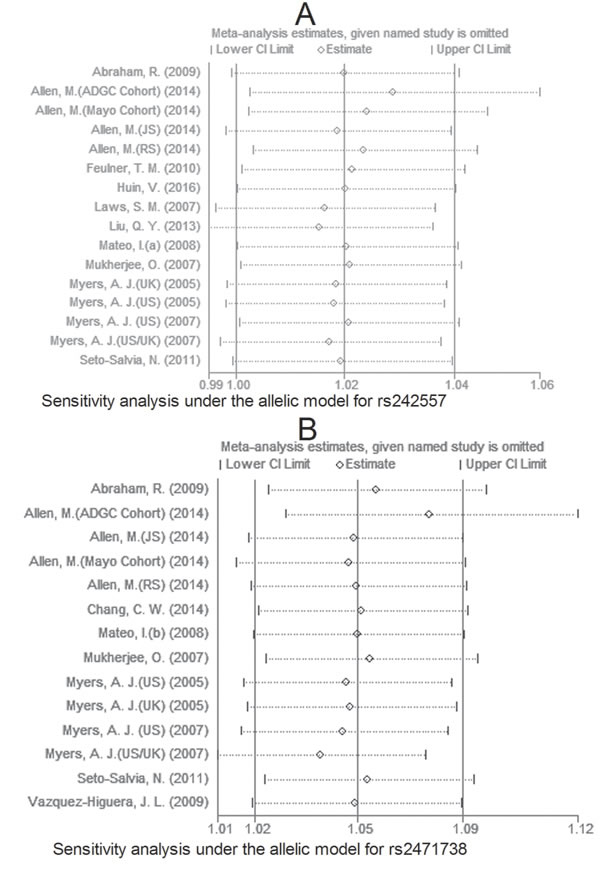 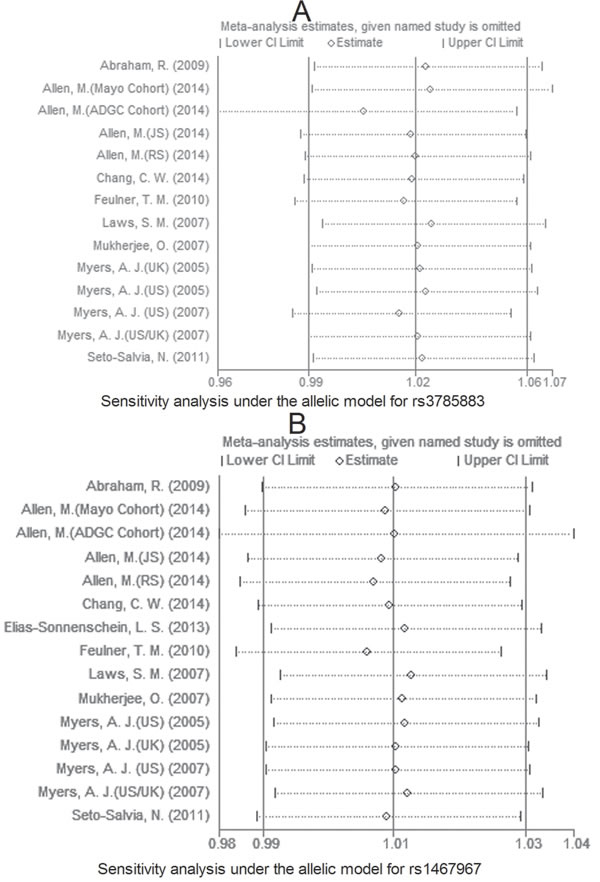 Therefore, we conducted this meta-analysis to explore the association between the MAPT SNPs and AD risk. In summary, results from this meta-analysis suggest that of these SNPs tested, rs242557 is significantly associated with increased AD risk under the dominant genetic model, and the rs2471738 SNP is significantly associated with increased AD risk under all the four genetic model. In the stratified analysis by APOE ε4 allele status, APOE ε4 allele carriers, but not APOE ε4 allele non-carriers, were showed to be significantly associated with increased AD risk. This result indicates that there appears to be a gene-gene interaction between the APOE and the MAPT genes, which could increase susceptibility to AD. More studies should, however, be conducted to assess the interaction.

Because of the moderate heterogeneity, we conducted sensitivity analyses to evaluate the effects of each study on the combined ORs by sequential removal of each eligible study. The sensitivity analysis showed that none of these studies changed the significance of the combined ORs under the allelic model. It was showed that Allele A of rs242557 with the H1p promoter variant had 2.7-fold greater transcriptional activity than allele G with the H1p promoter variant and 4.2-fold greater than allele G with the H2p promoter variant. The H1 haplotype increases the expression of total MAPT transcript [6]; allele A (AA + AG) of rs242557 was associated with CSF total tau levels elevated levels compared to non-carriers (GG) [5], indicating that SNP rs242557 might be associated with the increased expression levels of tau protein. Trabzuni, D. et al [23]. found that the H1c haplotype (tagged by rs242557) was not significantly associated with increased mRNA expression of the MAPT, suggesting that there are other things about possible consequence of this SNP on the MAPT, which is needed for further investigations. In the current meta-analysis, SNP rs3785883 was found not to be associated with AD risk under all the genetic models; in AD cases, however, there was higher levels of Total tau mRNA in those individuals who carry rs3785883 minor allele (AA or AG) than those with non-carriers (GG) with evidence of beta-amyloid deposition [24], suggesting that SNP rs3785883, which changes the expression of the marker protein of AD, but is not associated with AD risk, might be an complicated SNP of the MAPT gene.

There are some limitations to this meta-analysis. First, the total number of studies was not large enough for such analyses to give meaningful interpretation, and only published studies were included in the meta-analysis. To be made, however, this approach requires the authors of all of the studies to share their data. Second, there was evidence of moderate heterogeneity between studies, in particularly for rs2471738. Third, the present meta-analysis failed to consider the possibility of gene-gene or SNP-SNP interactions in which further investigations are needed. So it is quite important to have more studies and sample in the future so that more precise conclusion about the association between the SNPs of the MAPT gene and AD risk could be achieved.

In conclusion, our meta-analysis confirmed the following: SNPs rs242557 and rs2471738 might be associated with increased AD risk, but rs3785883 and rs1467967 not. More well-conducted studies with larger sample size are needed to confirm our conclusion.

Only studies published as full-length articles in peer-reviewed journals were considered in the analysis. The eligible studies must satisfy the following inclusion criteria: i) concerning the association between the MAPT gene (including SNPs rs242557, rs3785883, rs2471738, rs1467967, rs75721 and rs9468) and AD risk; ii) case-control study design; iii) sufficient information accessible (e.g. sample size for each study, allele or genotype frequencies of these SNPs); iv) cases meeting the clinical criteria for AD. The exclusion criteria include: a duplicated publication; a review; a case report; not reported the genotype frequencies; non-AD cases, a review; an irrelevant study; datum not available; an abstract; in neither English nor Chinese; inconsistent with most studies in major allele size.

Data extracted from the included studies were as follows: first author, year of publication, country, sample size of cases and controls, numbers of case and control genotypes, p-value for HWE in controls and Newcastle-Ottawa Scale (NOS) Quality Assessment Scale. The inclusion/exclusion criteria were applied by 2 (ZFT and WDL) independent reviewers. We used the NOS to assess the quality of the included studies. A quality score was calculated based on three major components. Each component of the criteria scored 1 if present or 0 if absent. The scores were summed and a higher score represents better methodological quality.

All statistical analyses were performed using Stata software (College Station, TX). The association between the MAPT SNPs and AD risk was evaluated by pooled ORs and corresponding 95% CIs. Four genetic models, including allelic (G vs. A), dominant (AA + AG vs. GG), recessive (AA vs. AG + GG) and additive (AA vs. GG), were used to estimate this association. Sensitivity analyses were performed to determine whether undue influence of a single study was present. The possibility of publication bias was assessed by Begg’s and Egger’s test (P < 0.05 was considered as representative of statistically significant publication bias).

The research was supported by Zhejiang Provincial Natural Science Foundation of China under Grant No. LY15H090013 and Project of Public Welfare Technology and Applications of Lishui City under Grant No. 2016GYX26.