This study is to clarify the prognostic value of preoperative plasma fibrinogen and serum albumin level, as known as FA score, in a cohort of Chinese patients with upper urinary tract urothelial carcinoma (UTUC). We retrospectively evaluated clinicopathological data on 169 patients who underwent surgery between 2006 and 2013. The FA score was calculated based on cutoff values of 3.53g/L for fibrinogen and 43.56 g/L for albumin. Overall survival and cancer specific survival was assessed using the Kaplan-Meier method and the equivalences of the curves were tested by log-rank tests. The Cox proportional hazards regression model was applied in univariate and multivariate analyses. In univariate analysis, tumor size, tumor grade, pathological T stage and FA score were significantly associated with overall survival and cancer specific survival, and multivariate Cox proportional hazards regression analysis identified FA score (score 1: HR=3.486, 95%CI 1.358-8.948, p=0.009; HR=3.485, 95%CI 1.363-8.913, p=0.009, respectively; score 2: HR=5.509, 95%CI 2.144-14.158, p<0.001; HR=5.521, 95%CI 2.074-14.697, p=0.001, respectively) was an independent predictor for overall survival and cancer specific survival. The evaluation of preoperative FA score can be regarded as an independent prognostic factor for predicting overall survival and cancer specific survival in UTUC. The fibrinogen and albumin levels are low cost and easy accessibility in clinical practice.

Urothelial carcinomas (UCs) have become the fourth most common cancer, However, upper urinary tract urothelial cell carcinomas (UTUCs) are relatively uncommon (only about 5-10% of UCs) but aggressive malignant disease [1, 2]. In 17% of cases, concurrent bladder cancer (BCa) is present [3]. UTUCs that invade the muscle layer usually have a very poor prognosis. The 5-year cancer specific survival (CSS) is < 50% for pT2 or pT3 and < 10% for pT4 [1, 4].

According to the latest published reports [1, 5] on UTUC, pathological T stage and tumor grade are regarded as prognostic indicators of great importance, and several other prognostic parameters, such as tumor size and lymph node involvement, were suggested to predict prognosis in UTUC. Predicting the outcome of each individual patient accurately is of great concern. However, reports on the preoperative prognostic factors are still limited in UTUC. Some groups illuminated certain prognostic indexes or models to predict the clinical outcome of UTUC [6, 7]. Increasing evidence shows that hemostatic factors, nutritional deficiencies and systemic inflammatory response (SIR) might play an important role in the development and progress of human cancer [8]. Several studies show that preoperative plasma fibrinogen which plays a vital part in clot formation, independently predicts prognosis in various human cancers [9-11]. Meanwhile, hypoproteinemia reflects SIR and has been reported as an important predictor of clinical outcomes in various types of cancer [8, 12, 13]. Furthermore, serum albumin level has been regarded as a crucial parameter of malnutrition. 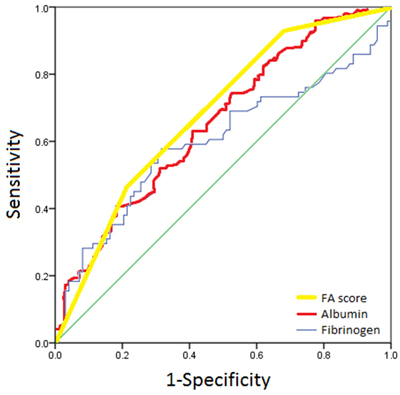 Fibrinogen and albumin were categorized into 2 subgroups, in which the optimal cutoff value of 3.53g/L and 43.65g/L, respectively, and the patients were divided into 3 groups according to the optimal cutoff value of both fibrinogen and albumin (Figure 1). We combined the two subgroups to define the FA score as follows: patients with an elevated fibrinogen ( > 3.53g/L) level and decreased serum albumin ( < 43.65g/L) were assigned a score of 2, those with only one of these two abnormalities were assigned a score of 1, and those with neither of the two abnormalities were classified as having a score of 0. 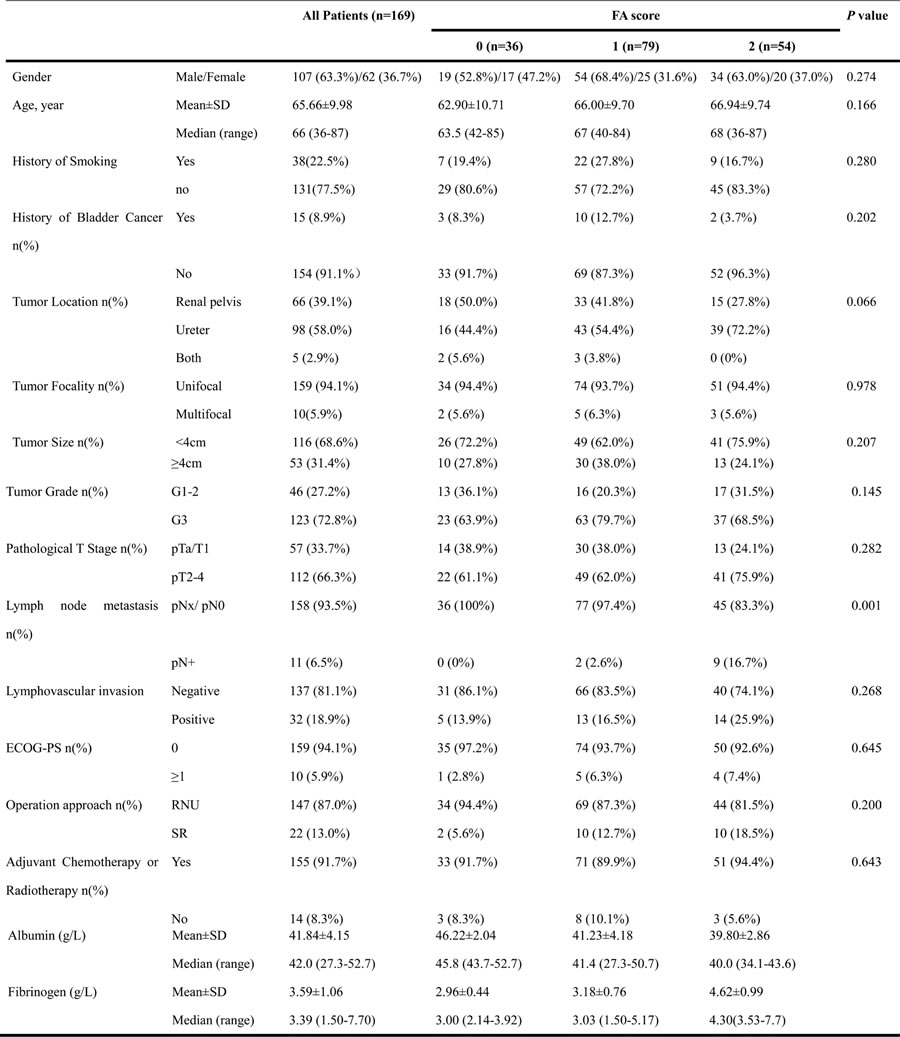 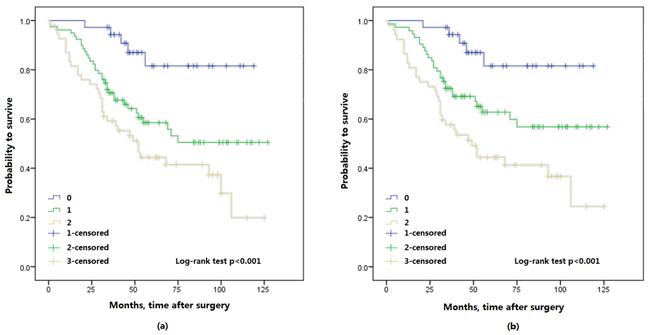 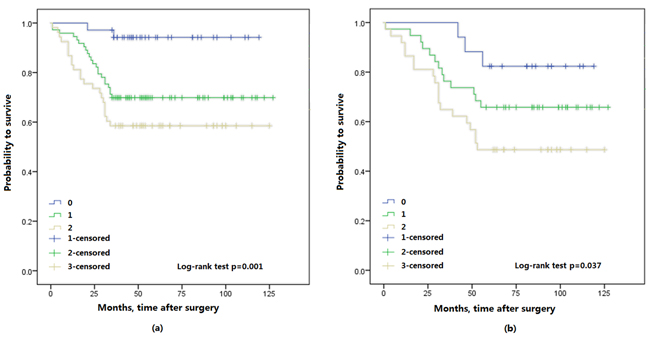 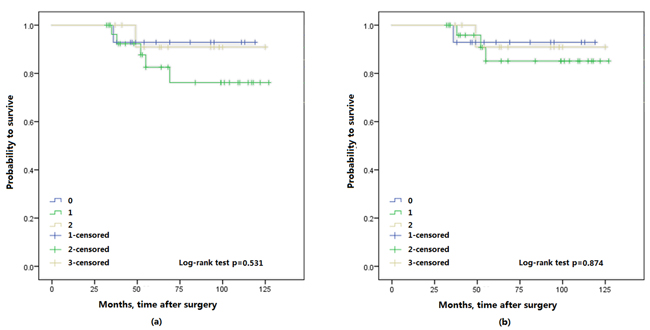 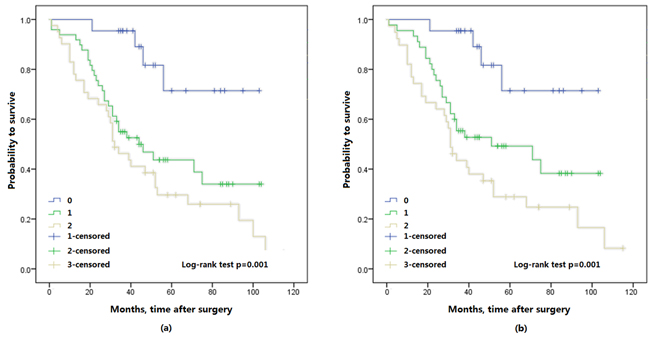 Due to lack of specific biomarkers for predicting survival of patient with UTUC, the stratification of prognostic risk mainly depended on pathological stage, tumor grade and lymph node metastasis. Now increasing evidence of hemostatic factors and SIR showed they might be heavily involved in the development and progress of various human cancers [9, 13, 16]. In the previous studies [6-9, 17], fibrinogen, albumin, neutrophil to lymphocyte ratio and some other hematology indexes were reported which could predict the prognosis of patients with UTUC. Tanaka et al [9] indicated that the strongly predicted value of fibrinogen was 4.50g/L, Pichler et al [6] reported 3.7g/L and Zhang et al [14] showed 3.54g/L, we set the cutoff value of 3.53g/L by ROC curve analysis. Ku et al [8] showed albumin of 35g/L was an independent factor to evaluate the prognostic value in patients with UTUC. Therefore, it seemed reasonable to use the combination of plasma fibrinogen and serum albumin for predicting survival of patients, and it could be more convincible because of the integration of hemostatic factors, malnutrition and SIR.

Serum albumin is produced by the liver and helps to maintain intravascular oncotic pressure, facilitate transport of substances and acts as a free radical scavenger [16]. Meanwhile, albumin is one of the most widely used markers for evaluating nutritional status. Malnutrition which might be reflected by serum albumin level could weaken the human defense mechanisms, including anatomic barriers, cellular and humoral immunity, and phagocyte function [13]. Several studies have reported hypoalbuminemia is associated with poor prognosis and post-operative complications in patients with various cancers [8, 13, 27]. However, Ataseven et al [13] suggested that no correlation between hypoalbuminemia and body mass index (BMI) which was an index of nutritional status in patients, but could reflect prognosis. More evidence has shown that hypoalbuminemia not only reflects patient’s malnutrition and directly reveals prognosis of survival, but also is considered a status of inflammatory response [8].

The chronic inflammatory response is associated with proliferation, development, progression and metastasis of tumor cells, as well as angiogenesis. Hypoalbuminemia may be caused by cytokines which is released by the tumor cell, such as interleukin(IL)-6, which blocks hepatocyte albumin production [28]. Tumor necrosis factor(TNF)-α has relationship with albumin levels, thus, TNF-α and cytokine levels may be a surrogate for more aggressive disease [29].

The present study shows the preoperative FA score is significantly associated with OS and CSS. Nevertheless, the results should be interpreted with caution. The potentially confounding factors related to prognosis in patients with UTUC had not calculated HR and 95%CI in the present study because of the limited number, such as tumor focality, ECOG-PS, operation approach and adjuvant therapy, this could be a potential bias.

The advantages for using the FA score are its low cost, routine measured and easy accessibility in clinical practice. And as a retrospective study, the limitations of the present study are inherent to the design. Moreover, single-institution and limited patients are another potential selection bias for the present study. Furthermore, part of patients in the present study had shortage of follow-up time. Only 92 patients were involved in 5-OS analysis. However, even considering these limitations, the present study suggests the FA score as a potential independent prognostic factor for OS and CSS in patients with UTUC. A well-designed, prospective study with multicenter involvement and a larger number of patients is needed.

This retrospective analysis included clinicopathologic and follow-up data from 169 patients with non-metastatic UTUC who received RNU or segmental resection at the department of urology at the Qilu hospital of Shandong University from January 2006 to December 2013. Patients with following condition were excluded from this study: (1) No data on preoperative plasma fibrinogen and serum albumin level; (2) Patients with autoimmune disease, cancer in other system or received neo-adjuvant chemotherapy and radiotherapy; (3) Pathological type was not urothelial carcinoma; (4) Distant metastasis was diagnosed; (5) No data on patients’ follow-up. This study was approved by the Institutional Ethics Committee of the Qilu Hospital of Shandong University.

All patients underwent routine hematologic examination, computerized tomography/magnetic resonance imaging, cystoscopy, urinary cytology and/or ureteroscopy with tissue biopsy to diagnose patients with localized non-metastatic UTUC before surgery. Segmental resection was conducted in imperative cases, such as chronic renal insufficiency, impaired renal function, solitary kidney, parenchymal rarefication of the contralateral kidney or American Society of Anesthesiologists score 4. Pathological T stages were uniformly adjusted according to the 2009 TNM classification of UTUC and tumor grade was assessed based on the World Health Organization (WHO) 1973 guidelines. LVI was defined as the presence of tumor cells within a lymph or vein duct. Preoperative baseline clinicopathologic and laboratory data, such as age, gender history of smoking, history of bladder cancer, tumor size, location and pathological type were reviewed and obtained from the electronic medical records. The tumor size was defined as the longest diameter of the general post-operative pathological specimens. ECOG-PS was conducted to evaluate the condition of patients before surgery.

Statistical analysis was performed using the Statistical Package for Social Science (SPSS for Windows, version 23.0, SPSS Inc., Chicago, IL) program. The fibrinogen and albumin level were shown as the mean and SD. Correlations between categorical variables were evaluated by the Pearson’s chi square test or Fisher’s exact test in this study. The probable cutoff value level for the fibrinogen and albumin level was determined by applying receiver operating curve (ROC) analysis. In short, the optimal cutoff value had the best sensitivity and specificity values in this study. And the most optimal cutoff value was used to further analysis. In OS and CSS analyses, the Kaplan-Meier method was used to evaluate the survival rates in different groups and the equivalences of the survival curves were tested by log-rank test. Besides, the Cox proportional hazards regression model was applied in univariate and multivariate analyses. The two-sided p value was used in our analyses, and a p value of less than 0.05 considered statistically significant.

The present study shows the evaluation of preoperative FA score can be regarded as an independent prognostic factor for predicting OS and CSS of patients with UTUC. The fibrinogen and albumin levels are low cost, routine measured and easy accessibility in clinical practice. Thus, the combination of plasma fibrinogen and serum albumin levels should be involved in the prognostic indicators, and improve the personalized multidisciplinary therapy for patients with UTUC. However, the detailed mechanisms of FA score in UTUC should be explained further.

None of the contributing authors have any conflict of interest, including specific financial interests or relationships and affiliations relevant to the subject matter or materials discussed in the manuscript.