Osteosarcoma represents 55% of all specified malignant bone cancers in adolescences under the age of twenty [1]. More than 20% of the young-onset osteosarcoma patients present with distant metastases at diagnosis, and 40% cases in advanced stages progress to metastasis during therapy [2]. Despite the developments of novel treatment strategies, patients suffered from osteosarcoma still evolve with a dissatisfying prognosis. It is reported that the 5-year survival rate of osteosarcoma is lower than 62% in patients with localized disease, yet in those with recurrent or metastatic status, this rate will be attenuated to about 20% [1,3]. In consequence, there is a critical need to find and develop novel prognostic biomarkers in monitoring progression and survival of osteosarcoma in clinic.

Recently, the discovery of the long non-coding RNAs (lncRNAs) has provided new insights into cancer research. LncRNA is defined as one kind of endogenous RNA comprises a sequence larger than 200 nucleotides but with no significant or functional open reading frame(s) [4]. Since their discoveries, lncRNAs are being investigated at a rapid pace and the corresponding functions are being interpreted. At present, lncRNAs have been confirmed to be implicated in regulation of diverse biological processes, including gene expression, cell proliferation, apoptosis, migration, and protein localization, etc [5-7]. More than that, many investigations have indicated promising results for the potential value of lncRNAs as prognostic indicators in cancers [8-11]. For instance, a meta-analysis from Chen et al reported that altered lncRNAs were not only associated with poor prognoses in renal cell carcinoma cancer, but also correlated to lymph node metastasis and distant metastasis of the disease, thereby recommending their potential clinical applications as novel biomarkers in forecasting prognosis or guiding therapeutics [11].

Till now, the prognostic roles of multi-types of lncRNAs have been investigated in osteosarcoma as well, consisting of HULC, HOTTIP, MEG3, TUSC7, TUG1, 91H, and OMRUL, etc [12-23]. All of the above-mentioned lncRNA signatures have in common that testing of lncRNA(s) levels may be served as potential and efficient prognostic markers for osteosarcoma. Nevertheless, no meta-analysis has been conducted to provide a comprehensive overview of the clinical utilities of lncRNAs in surveillance of osteosarcoma prognosis. Herein, we established standardized inclusion criteria and statistical approach, and conducted this meta-analysis with the purpose of giving a comprehensive evaluation of the associations between lncRNA signatures and clinical outcomes in osteosarcoma.

The procedure of literature inclusion and exclusion is illustrated in Figure 1. According to the predefined criteria, a total of 84 records were obtained from the online PubMed, EMBASE, Chinese National Knowledge Infrastructure (CNKI), and WANFANG databases after duplicates removed. After the manual screening, 61 citations were excluded by searching titles and abstracts. Twenty three articles received full-text evaluation, and 13 publications were discarded either because the status of reviews or basic research articles. Finally, a total of 10 cohorts were evaluated for the final meta-analysis.

The major characteristics of each enrolled study are summarized in Table 1. Ten publications with a combined study population of 674 cases were included. All samples were retrieved prior to treatment and the final diagnosis all relied on the histopathological examinations. Expression status of all lncRNAs was determined by quantitative reverse transcription polymerase chain reaction (qRT-PCR). The reference genes comprised DAPGH [14, 17, 19-21, 23], G3PDH [22], β-actin [13, 16, 21], and 18S rRNA [18]. The primary endpoints included OS, PFS, and EFS, with a median follow-up time ranged from 25 to 60 months. The altered lncRNA expression profile possessed a total of 9 individuals, yet 7 of them (TUG1, 91H, HULC, BANCR, FGFR3-AS1, HOTTIP, and OMRUL) were overexpressed in osteosarcoma tissues/plasma, and 2 (MEG3 and TUSC7) were down-regulated. 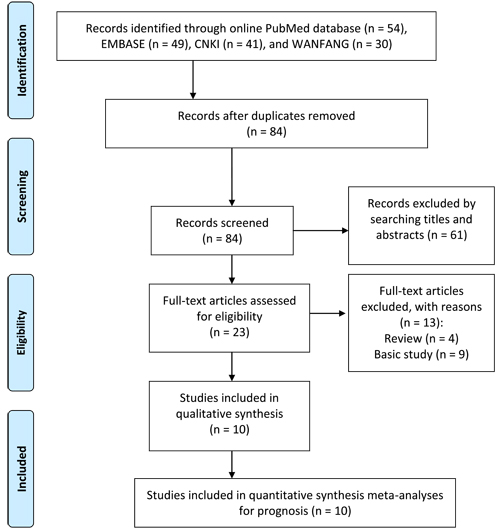 Article quality was judged by the NOS checklist [24], and total evaluation scores of each study regarding cohort selection, comparability and outcome ascertainment are summarized in Table 1. All studies retained NOS scores larger or equal to 7, suggesting a relatively high quality of the included investigations.

HR: hazard ratios; CI: confidence intervals. *indicates that data were obtained by using a random-effect model in the meta-analysis.

Results of the prognostic meta-analysis 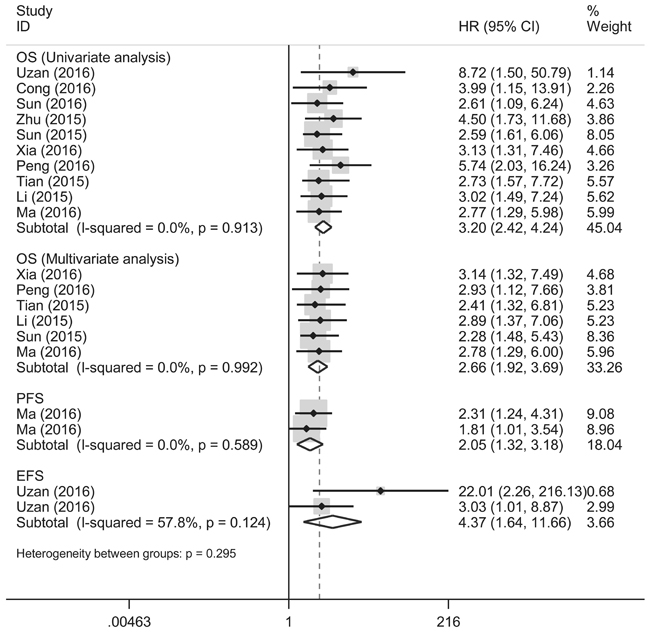 Table 3: Comparison of the P values of correlations between lncRNA signature and clinicopathological features in osteosarcoma

Sensitivity analysis were undertaken to deeply trace the outliers among studies. As indicated in Figure 3, no individual studies were assessed as outliers, hinting that the pooled results of our meta-analyzed data were reliable. 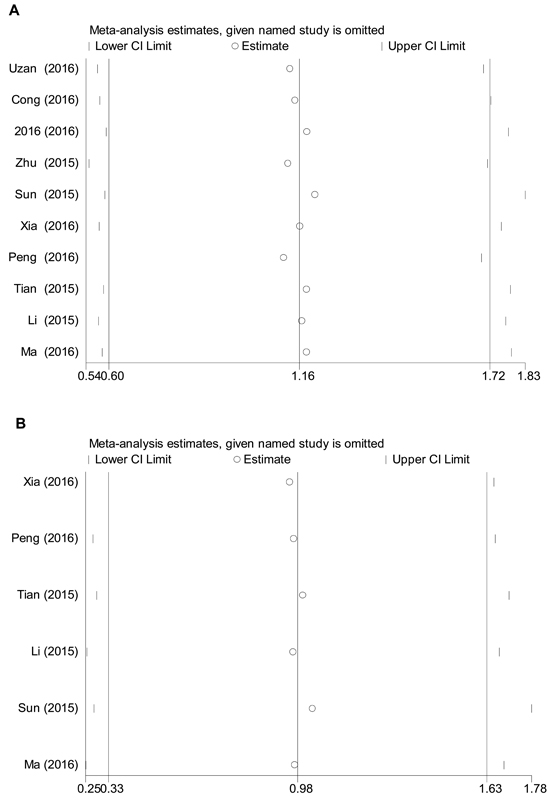 Degrees of publication bias were judged by Bgger’s funnel plot and Egger’s publication bias plot. As exemplified in Figure 4, both the two tests presented P values larger than 0.5 in the overall pooled analyses, suggesting a low likelihood of significant bias due to article publication. 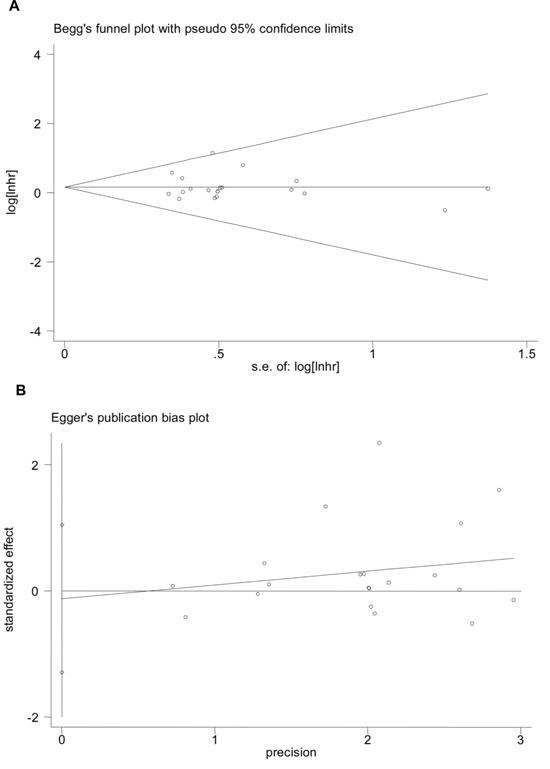 Osteosarcoma is a complex and aggressive primary bone sarcoma, making up 55% of the specified bone cancers in adolescents with 0 to 19 years of age [1]. Despite the rapid advantages in diagnosis and therapeutics, the prognostic outcomes of osteosarcoma remain dissatisfying [1, 3]. It is urgent to identify and develop novel markers or targets to aid in diagnosis, treatment, as well as prognosis of osteosarcoma. In recent years, lncRNAs have been highlighted as potential prognostic biomarkers for osteosarcoma [12-23]. In this respect, a comprehensive meta-analysis is warranted to present an overview of the prognostic utilities of lncRNAs for osteosarcoma. We therefore conducted this meta-analysis, attempting to assess the associations between lncRNA signatures and survival times in osteosarcoma.

Our results demonstrated that altered lncRNA signatures were significantly associated with shorter OS, PFS as well as EFS times in osteosarcoma. The pooled HR of OS time for univariate analysis was estimated to be 3.20 (P = 0.000), and that for multivariate analysis was 2.66 (P = 0.000), hinting that altered lncRNA expression, at least the current well-characterized lncRNAs, are acceptable to be novel indicators in forecasting prognosis of osteosarcoma. Similar results were obtained in merged PFS and EFS of the osteosarcoma patients as well. A newly published meta-analysis study from Chen et al evidenced that lncRNAs could act as promising markers for prognosis as well as lymph node metastasis and distant metastasis in renal cell carcinoma [11]. Another pooled analysis conducted by Hong et al also manifested that lncRNA-UCA1 expression status is markedly correlated with poor OS and PFS times in various cancers [25]. Agree with the above findings, our data strengthened the observation that lncRNA profiles sustain a pivotal role in forecasting prognosis in osteosarcoma.

LncRNAs are involved in the carcinogenesis as well as progress and metastasis of osteosarcoma [14, 16, 17, 19, 20, 22]. In our subgroup analysis stratified by clinicopathological features, we found that tumor size, clinical stage and distant metastasis were negatively associated with OS time of the osteosarcoma patients. More importantly, lncRNA profiling was found to be strongly correlated with tumor size, clinical stage and distant metastasis. The results allowed us to suggest that lncRNA(s) expression is correlated to osteosarcoma with a more aggressive behavior. A study meta-analyzed the associations between lncRNA-MALAT1 expression and clinicopatholoical characteristics corroborates our findings: MALAT1 level was demonstrated to be closely associated with clinical stage and lymph node metastasis in renal cell carcinoma [11]. Another investigation from Jing et al presented the similar results [26]. Nevertheless, some research found no significant associations between lncRNA-HULC expression and clinicopathology features in osteosarcoma [21]. Thus, more evidences are still warranted to reinforce our findings.

Among the altered lncRNA profiles, 7 lncRNAs involved TUG1, 91H, HULC, BANCR, FGFR3-AS1, HOTTIP and OMRUL [14, 16-19, 21-23], were notably increased in patients with osteosarcoma and strongly correlated to worse clinical outcomes, indicating that such lncRNAs may play oncogenic roles in maintaining tumor progression. Intriguingly, Zhang’s investigation had evidenced that some of the above lncRNAs, such as TUG1, was down-regulated in non-small cell lung carcinoma and also indicated poor survival in such disease [27]. On the other hand, abundance of two types of lncRNAs, MEG3 and TUSC7 were demonstrated to be down-regulated in osteosarcoma patients and significantly associated with survival times [13, 20]. It has been reported that expression of MEG3 RNA was detectable in many normal tissues, but lost or decreased in many primary cancers [28]. Similarly, expression level of TUSC7 was lower in osteosarcoma tissues than non-tumor tissues, and that silencing of TUSC7 expression in osteosarcoma cells resulted in promoted cell viability [13]. These findings indicate that expression of lncRNAs may be tissue-specific and act distinct but different roles in cancer biology.

Despite the promising data, the current study still yields some limitations. Firstly, a total of 9 individual lncRNAs were included and the pooled results, to some extent, only provide an overview of the prognostic utilities of all current studied lncRNAs, yet suitable lncRNA(s) or expression patterns or other novel lncRNAs for clinical applications should be further identified and confirmed. Secondly, the enrolled studies encountered restricted patient sizes, which, to some extent, may compromise the overall accuracy of the pooled results. Thirdly, most of studies were conducted in Chinese and the results may be more applicable to this racial population group. Last, many factors included different cut-off points for lncRNA signatures may eventually increase the heterogeneity among studies; additionally, different clinical stages, treatments (surgical remission), chemotherapy responses, as well as unclear concomitant disease conditions among patients, may eventually affect the endpoints of survival in osteosarcoma.

Taken together, the current study demonstrated that lncRNA signatures hallmark promising value in surveillance of clinical outcomes, and therefore could be developed as predictive biomarkers for osteosarcoma survival. Notwithstanding, other large-scale and high quality investigations are still warranted to further validate the clinical utilities of lncRNAs (single or in parallel) for osteosarcoma.

The entire contents of this study are in compliance with the guidelines of Preferred Reporting Items for Systematic Reviews and Meta-analysis (PRISMA) [29]. We conducted a computerized literature search in the online PubMed, EMBASE, CNKI, and WANFANG databases from inception to July 31st 2016. The search keywords were predefined as “long non coding RNA” or “lncRNA”, “osteosarcoma” or “osteogenic sarcoma”, and “prognosis” or “hazard ratio” or “HR”, etc. To avoid missing eligible studies, we manually searched the article references for data collection as well.

The inclusion criteria were: (a) cohort design; (b) studies addressed the association between lncRNA(s) expression and prognosis of osteosarcoma; (c) the primary endpoints as OS, PFS, DFS (disease-free survival) or EFS were clearly defined; and (d) the HRs with corresponding 95%CIs were available or can be calculated indirectly. The exclusion criteria were: (a) studies unrelated to the prognostic utility of lncRNA(s) in osteosarcoma; (b) data was unclearly presented and insufficient to perform the statistical analysis, and (c) basic research, animal studies, reviews, letters and comments, etc.

Study quality of all cohort studies was judged utilizing the Newcastle-Ottawa Scale (NOS) checklists, wherein, cohort selection, comparability and outcome ascertainment of each study were estimated, with a maximum evaluation score of 9 (a score ≥ 6 was rated as study with high quality)[24]. If the enrolled single study received a relatively low evaluation score after quality assessment, it will be excluded for the final statistical analysis.

All statistical analyses were undertaken via Stata 12.0 program (Stata Corporation, College Station, TX, USA). Degrees of study heterogeneity was examined by Chi-squared and I-squared tests, and significant level was set at P<0.05 (I-squared>50%) [30]. The DerSimonian and Laird method (random-effect model) will be applied in case of significant heterogeneity existed among studies, otherwise, the Mantel-Haenszel method (fixed-effect model) will be chosen for the analysis [31]. For the pooled analysis, HRs and the corresponding 95% CIs were extracted and meta-analyzed for aggregation of the survival results. In the stratified analysis, the P values were merged by utilizing Fisher’s test. Publication bias was checked by Egger’s and Bgger’s tests, and P<0.05 was deemed as statistical significant [32].

All authors declare that there are no conflicts of interest.

24. Stang A. Critical evaluation of the Newcastle-Ottawa scale for the assessment of the quality of nonrandomized studies in meta-analyses. European journal of epidemiology. 2010; 25:603-605.