IgA nephropathy (IgAN) is the most common primary glomerulonephritis (GN) and one of the leading causes of end-stage renal disease (ESRD) worldwide [1-2]. The incidence of IgAN is particularly high in the East Asian population, accounting for > 40% of kidney biopsy specimens obtained from patients with primary GN in China or Japan [1]. IgAN is recognized as a chronically progressive disease. Among patients with biopsy-proven IgAN, 15%-20% reach ESRD within 10 years and 20%-40% within 20 years [3]. At present, treatment options for IgAN are still very limited. Disease management mainly consists of controlling blood pressure and lipid levels and reducing proteinuria by ACEI or ARB, together with other supportive treatment. In addition, the 2012 KDIGO GN Guidelines recommend that patients with persistent proteinuria (≥1 g/d and eGFR > 50 ml/min per 1.73m2) despite 3-6 months of optimized supportive care should receive a 6-month course of CS therapy [4]. However, the long-term use of CS is associated with many side effects, including abnormal glucose metabolism, osteoporosis, etc. Some patients with IgAN may also develop CS resistance or dependence, or relapse after withdrawal of steroids. Therefore, several clinical trials have been performed to determine whether combination therapy of steroids and immunosuppressive medications such as cyclophosphamide [5-6], azathioprine [7-8], mycophenolate mofetil [9-14], tacrolimus [15], and mizoribine [16] could provide better renal outcomes and fewer side effects. However, the results were inconsistent [17]. Leflunomide (LEF), an immunosuppressive agent that inhibits the synthesis of pyridines, has been widely used in rheumatoid and renal diseases in recent years [18-21]. Several randomized trials evaluated the efficacy of LEF in the treatment of IgAN. The results suggested that LEF reduced the amount of proteinuria and ameliorated renal function deterioration, with only mild side effects [22-24]. Yet, randomized long-term follow-up studies are lacking. Therefore, we conducted here a randomized, controlled, prospective, open-label trial with long-term follow-up to determine whether LEF plus low-dose CS is safe and effective for the treatment of progressive IgAN, as compared to full-dose CS alone.

In total, 90 patients with IgAN were randomly assigned to one of two groups: 1) CS (full-dose prednisone); 2) LEF (LEF plus low-dose prednisone). Five patients dropped off before treatment. Of the remaining 85 patients, 45 were assigned to the CS group and 40 to the LEF group. 80 patients (43 patients in the CS group and 37 patients in the LEF group) completed the 12-month treatment and were followed up for a median period of 88 months (Figure 1). 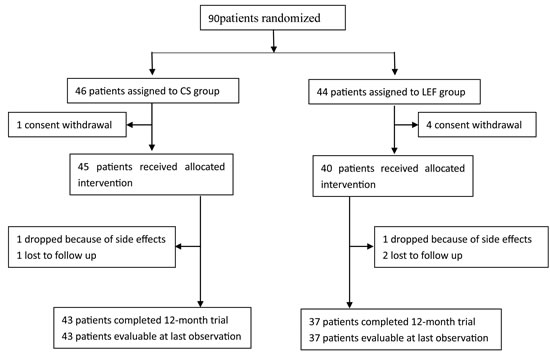 Table 1: Baseline clinical and histological characteristics of the study subjects

Renal function was stable in both groups through the 12-month treatment period, as indicated by SCr and eGFR, which were no different between groups (Table 2).

No statistically significant differences in primary outcomes were noted between groups. However, there was a trend towards better outcomes in the LEF group. The rate of ESRD was 11.1% (5/45) in the CS group vs. 7.5% (3/40) in the LEF group. A 50% increase in SCr from baseline occurred in 20% of patients (9/45) in the CS group vs. 10% of patients (4/40) in the LEF group. The cumulative probabilities of event-free survival for the primary outcomes were calculated using the Kaplan-Meier method. No significant between-treatment differences were observed (Figure 2). 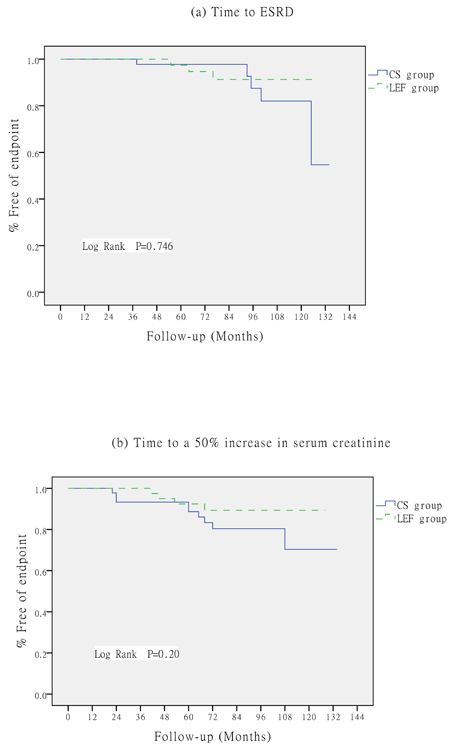 Figure 2: Kaplan-Meier survival for primary outcomes; Log rank significance for ESRD a. and for a 50% increase in SCr b. 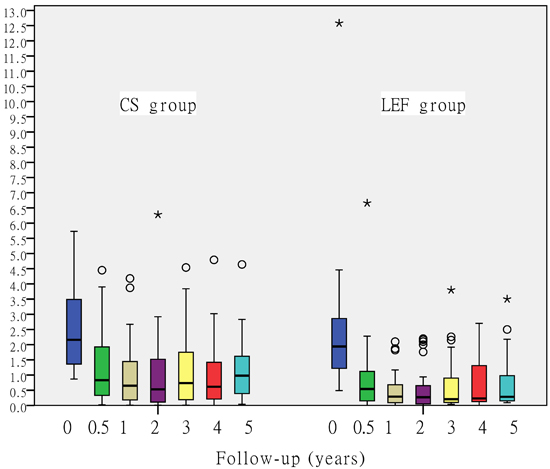 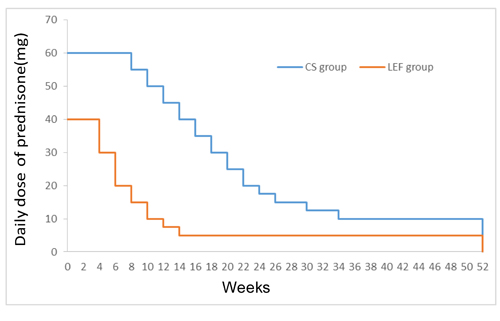 Table 3 lists the adverse events that occurred during treatments. Five of the 85 patients did not complete the 12-month therapy; 3 of them (1 in the CS group and 2 in the LEF group) were lost to follow-up and the other 2 (1 in each group) had serious pulmonary infection.

As treatment options for IgAN, a leading cause of primary glomerulonephritis, remain limited, there is a pressing need for improved therapies to alleviate this condition. The present results suggest that LEF plus low-dose CS is at least as effective as full-dose steroid monotherapy for the treatment of progressive IgAN, and is associated with both greater reduction of proteinuria during long-term follow up (12-88 months) and the absence of severe adverse events.

Consistent with our findings, previous investigations revealed that LEF could attenuate inflammation and ameliorate kidney injury [25-26]. Although some of the data on the effects of combined immunosuppressive medications plus steroids, as compared to steroids alone, on the remission rate of proteinuria are inconsistent [17] [30], several small clinical trials suggested that LEF can reduce proteinuria and delay IgAN progression [22-24]. A recent meta-analysis [27] of 13 RCTs involving 623 patients compared LEF (alone or plus steroid) with steroid therapy alone. LEF demonstrated a marked advantage on CR/PR of proteinuria, as compared with steroid therapy alone (CR/PR; RR, 2.64; 95% CI, 1.80-3.86; P < 0.00001). Although in our study the remission rate was similar between the LEF and CS groups, proteinuria levels were markedly lower in the LEF group during the follow-up period. On the other hand, the relapse rates in our trial, i.e. 16.1% in the CS group and 14.8% in the LEF group, were also similar between groups and comparable to those reported by Yuan et al. [28].

We observed no statistical differences regarding renal survival between the two groups. Consistent with our study, Pozzi et al. [8] added low-dose azathioprine to CS for IgAN treatment and found that the 5-year renal survival rate was no different than that achieved with steroids alone [29]. However, Tang et al. [11] reported that the 6-year renal survival with mycophenolate mofetil treatment was higher than that with conventional treatment with CS. These studies suggest that the use of immunosuppressive medications alone or in combination with CS for the treatment of IgA nephropathy results in equal or better long-term outcomes than conventional steroid monotherapy.

Most combination therapies with immunosuppressive medications cause considerable side effects. The adverse events of LEF in IgAN patients were summarized in a meta-analysis [27]. It showed that 4.7% of patients demonstrated elevated liver enzymes, 3.7% of patients exhib­ited digestive symptoms, and 4.4% patients had alopecia. In our study, the incidence of adverse events was similar between the CS and LEF groups. However, two severe adverse events occurred in the CS group during the follow-up period. Cerebral hemorrhage occurred in a 63-year-old male patient who developed abnormal glucose metabolism in the first round of prednisone and whose blood pressure control was not ideal. Aortic dissection occurred in a 35-year-old male patient with normal blood pressure. These two patients had a history of more than two cycles of CS therapy during the entire treatment and follow-up period, and it is possible that these adverse events were associated with long-term CS use. Our results suggest that LEF combined with low-dose CS is probably safer than full-dose steroid course for the treatment of IgAN, especially in those patients who could not tolerate full therapeutic CS dosages.

There were several limitations in our study. This is a single-center study with a relatively small sample size. Therefore, we could not perform subgroup analysis and true differences in renal survival between the groups might thus be masked. In addition, we could not perform intention-to-treat analysis, which is based on the initial treatment assignment and not on the treatment eventually received, because we could not access the clinical data of 5 patients who were withdrawn from the study. Finally, we did not have a detailed record of the frequency and treatment regimens of the disease relapse cases during the 88-month follow-up period.

In conclusion, a 12-month course of LEF combined with low-dose CS seems to be at least as effective as full-dose CS for the treatment of progressive IgAN, and is associated with both greater reduction of proteinuria and fewer severe adverse events during long-term follow-up. This regimen could be an alternative treatment option for IgAN patients with relative contraindications to full-dose corticosteroid therapy.

No other immunosuppressive or cytotoxic agents were used. All patients were given ACEI/ARB unless blood pressure was ≤ 90/60 mmHg or if there was hypotension. Additional anti-hypertensive medications were also prescribed if blood pressure was > 130/80 mmHg with ACEI/ARB alone. Patients who developed hyperlipidemia, infection, or a hypercoagulable state were treated accordingly.

The duration of the treatment was 12 months. We evaluated clinical efficacy and monitored adverse events at 6- and 12-month time points. After one year of treatment, we continued to follow the patients for a median period of 88 months. We recorded the patients’ medications, clinical characteristics, and laboratory results at each follow-up visit. Urinary protein excretion was measured in 24-hour samples obtained at least once a year. During the follow-up period, the patients were retreated with the original regimen if the disease relapsed.

The criteria for the discontinuation of treatment included severe infection or other serious adverse reactions associated with the tested drugs, pregnancy, and death or lost to follow-up.

Normally distributed variables were expressed as means ± SD and compared using a t-test or analysis of variance (ANOVA) as required. Non-parametric variables were expressed as median with range and compared using either the Mann-Whitney U test or the Kruskal-Wallis test. The chi-square test was employed for the categorical variables. Kaplan-Meier survival functions with the log-rank test were used to calculate the cumulative rates of the primary outcomes in the two groups. All tests were two-tailed, with p-values < 0.05 considered statistically significant. All statistics were done using SPSS 19.0.

We are grateful to the National Natural Science Foundation of China and the Shanghai Health Bureau for the financial support. We thank all the doctors at the Nephrology Department of Ren Ji Hospital in Shanghai, China, for their work.

5 Ballardie FW, Roberts IS. Controlled prospective trial of prednisolone and cytotoxics in progressive IgA nephropathy. Journal of the American Society of Nephrology. 2002; 13:142-148.