In-vivo relation between plasma concentration of sorafenib and its safety in Chinese patients with metastatic renal cell carcinoma: a single-center clinical study

A total of 94 patients (age, 21-73 years), whose plasma concentration of sorafenib was monitored during January 2014 to January 2015 at the 307 Hospital, Beijing; China were enrolled in this study. A total of 43 patients had stage 3 and 51 patients had stage 4 RCC at baseline. Of the 94 patients included, 74 patients had received sorafenib 400mg bid, 18 patients received 600mg thrice daily (t.i.d.) and 2 patients received dose of 400mg once daily (q.d.). Other demographic characteristics and concomitant indications of the patients are presented in Table 1. A total of 94 cases of A/A and 2 cases of A/G were reported (Supplementary Table 1).

Major ADRs reported with sorafenib treatment included diarrhea (76.50%), hand-foot syndrome (HFS, 66.89%), fatigue (55.2%), hypertension (34.04%) and alopecia (36.17%). The ADRs reported in the study are presented in Table 2. Severe ADRs were reported in 8 patients. In these patients the Css of sorafenib was > 10,000 ng/mL. Skin fading was observed in 6.38% patients due to a relatively short follow-up after drug administration. Severe ADRs with sorafenib treatment included hypertension (n = 2), HFS (n = 4) and diarrhea (n = 2), which were the primary reasons for treatment discontinuation. Most of the cases of hypertension and HFS were grade 3 and grade 2. A high proportion of patients also reported grade 3 fatigue. All the other ADRs reported in the study were mostly of grade 1, with few grade 2 ADRs. Findings of toxicity analysis are presented in Table 2. All the events were grade 1-3 and no grade 4 toxic effects were observed. 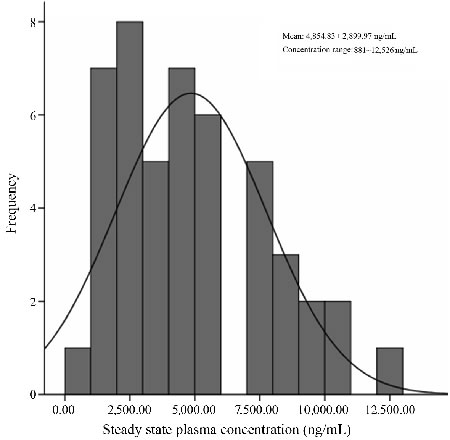 Table 4: Correlation of ADRs with OS and PFS 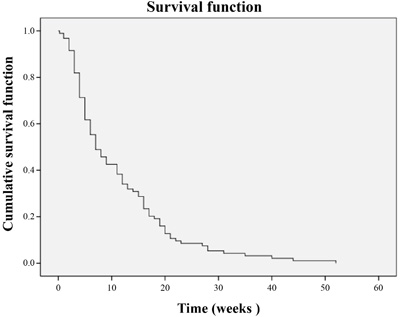 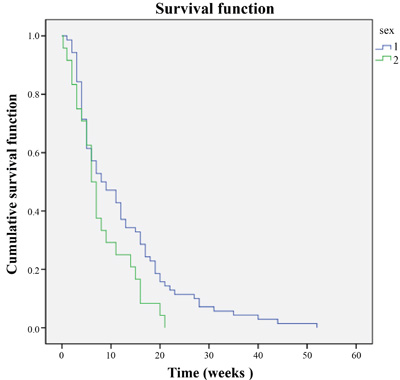 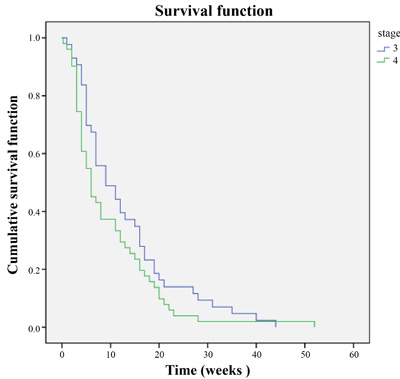 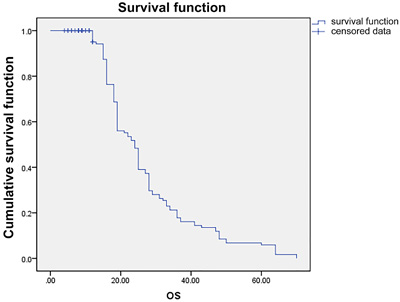 Relation between plasma concentration and efficacy of sorafenib

In this study, a significant variation in plasma concentration of sorafenib at same dosage (400-600mg) was observed. The oral bioavailability (28-49%), t1/2 (25-48 h) and Css (achieved after 7 days) observed in this study are in line with the prescribing information of sorafenib [3]. The mean plasma concentration was 4,854.83 ± 2899.97 ng/mL and fluctuated between 881 and 12,526 ng/mL, which have not been reported by other researchers. There were 16 patients whose drug concentrations were below the average level. The concentrations were increased above the average value after increasing the drug dosage to 600mg. This study also suggested the effective concentration of sorafenib in Chinese patients to be higher than that reported by other researchers [14]. Because this association could be due to genetic, physiological or pathological factors, the dose and concentration reported in other ethnicities may not be applicable to Chinese patients with RCC. Insufficient or excessive concentration of targeted drugs functioning on their targets may lead to ineffectiveness of treatment or new adverse effects, even drug-induced diseases, therefore effective and safe personalized therapeutic regimen should be tailored according to real-life settings.

Genetic variation in VEGF, CYP3A and UGTIA leads to altered metabolism of sorafenib and resultant toxicity [15, 25, 28, 29]. In a study by Qin et al, polymorphisms in rs1570360 in VEGF and rs2239702 in VEGFR2 were associated with significant PFS, specifically patients with variant genotypes (AG + AA) polymorphisms both had an unfavorable PFS. Additionally, comparison of patients with rs2239702 GG genotype, patients with the AG + AA genotype demonstrated an unfavorable OS. These findings suggested that VEGF and VEGFR2 showed association with clinical outcomes and toxicity of sorafenib [16]. However, in a case-control study by Sáenz-lópez, VEGF polymorphisms did not exert any significant influence on progression or prognosis of RCC [30]. Expression and levels of PDGFR-α is independently associated with in RCC patients treated with sorafenib, therefore considering expression of PDGFR-α may likely benefit patients with RCC [28]. Rouquette et al demonstrated that patients at high risk for early sorafenib-induced severe toxicity had high cumulated drug exposure and polymorphism of UGTIA9 (rs17868320) [29]. Sorafenib has shown greater efficacy in Chinese patients with mRCC compared with Western population, which might be associated with genetic variation between the 2 populations. However, ADRs such as HFS and alopecia are more commonly observed in Chinese patients than the Western counterparts [31]. In our study, sorafenib treatment resulted in toxicities which included asthenia, mucositis, diarrhea, neutropenia and HFS. As observed in earlier studies, polymorphism in VEGF, CYP3A and UGTIA were associated with different ADRs of sorafenib. In addition, SNP distribution (VEGFR3 (rs307826) and CYP3A5*1 (rs776746)) in Chinese patients with RCC was different from the Western patients, as Chinese patients has higher wild type VEGFR3 (rs307826). Genetic polymorphism of UGT1A1 has been associated with toxicities of sorafenib including elevated bilirubin [32]. Another in-vitro study evaluating the effects of UGT1A variants on PK of sorafenib reported that patients with UGT1A1, UGT1A9, and ABCC2 genotypes had abnormally high area under the curve (AUC) for sorafenib [33]. Hypertension and HFS occurred in high frequency in patients with VEGFR2 rs1870377 variant compared with wild type carriers [34]. In the present study, the genetic variants under evaluation also reported association with safety of sorafenib. Genetic variants VEGFR2 rs2239702, ABCB1 rs1045642 and ABCB1 rs2032582 were significantly associated with increased risk of HFS and hypertension; ABCB1 rs1128503 was reported associated with increased risk of hypertension; UGT1A1*6 rs4148323 and UGT1A9 were associated with hypertension.

Our study has a few limitations due to which the findings must be interpreted with caution. Firstly, the patients were not included randomly and the number of patients included in this single-centre study was small. Secondly, the follow-up period was small. Therefore large-scale, multi-center, randomized studies are needed to validate these findings.

In conclusion, the plasma concentration of orally administered sorafenib was found to be related to its safety in Chinese patients with RCC. In addition, dose-dependent increase in incidence of ADRs was observed with increase in dose of sorafenib. These findings will enable clinical practitioners in China to personalize the dose of sorafenib as per the patient’s requirements and minimize the incidents of ADRs.

This was a single-center, observational study that enrolled patients with RCC between January 2014 and January 2015. Patients were considered eligible if they had histological confirmation of non-resectable advanced mRCC; aged > 18 years; had Eastern Cooperative Oncology Group (ECOG) performance status grade 0 to 2; life expectancy of at least 12 weeks; and willing to provide informed consent. Patients were considered ineligible for the study if they were unstable or had severe cardiac disease or uncontrolled brain metastases or any other factors regarded as inappropriate for this study by the investigators.

The study protocol was approved by the ethics committee of the 307 Hospital, Beijing, China in accordance with the national and international guidelines and confirmed to Declaration of Helsinki (1964) and its subsequent revisions. All patients received information on the purpose and conduct of this study, and provided written, informed consent.

The patients enrolled in the study had received sorafenib (400 mg) orally twice daily continuously in a 4-week cycle until disease progression, unacceptable toxicities, or mortality. Blood samples were collected on or after 7 days of drug administration. The samples were collected in the morning before administration of drug. For treatment-emergent toxicities of grade 3 or higher, therapy was withheld until resolution to grade 1 or lower. If the patient experienced grade 3 or 4 drug-related toxicity, second time, the dosage was decreased by one level. The dose of sorafenib was escalated to 600 mg in patients who tolerated the standard dose of sorafenib well. Sorafenib was started after a gap of 2 weeks in patients who underwent surgery. The patients were monitored for duration of 3 months. Treatment was continued until tumor progression or occurrence of uncontrolled ADRs.

The primary outcome of our study was to determine the association of sorafenib plasma concentration with its safety and efficacy. The secondary outcome included determination of PK parameters in different SNPs and the safety in patients with different SNPs.

ADRs were assessed as per the National Cancer Institute-Common Toxicity Criteria for Adverse Events (NCI-CTCAE) Version 3.0 [35]. The toxic AEs were analyzed on the basis of clinical relevance and grading objectiveness, together with grade 3-4 AEs. Efficacy of treatment was evaluated using Response Evaluation Criteria in Solid Tumors criteria, Version 1.1 [36]. We examined tumor responses which include complete response (CR), partial response (PR), stable disease (SD), and progressive disease (PD) rates, as the secondary outcome for the patients treated with sorafenib. Response rate was defined as the proportion of patients with CR and PR in the analyzed population. Patients alive or lost to follow-up were censored at their last follow-up date.

The analysis of sorafenib concentration, SNP selection and DNA extraction and genotyping were performed at the Department of clinical pharmacology, at the Affiliated Hospital of Military Medical Science Academy of the PLA, Beijing, China

All the demographic and clinical data were recorded on specific case record forms. The forms were periodically monitored by an external monitor.

The sample size was not defined on the basis of an end point hypothesis, but rather to provide information about the safety and efficacy of the analysis. All the patients who met the inclusion criteria during between January 2014 and January 2015 were included in the study. Continuous data were expressed as mean ± SD or as median, as appropriate, whereas categorical data were summarized as frequencies and percentages. No comparative analyses were performed. A univariate correlation analysis was performed to find the association of plasma concentration and ADRs. Statistical analyses were performed using the SPSS version 22.0 (SAS Corporation, Cary, NC, USA) and Stata version 10 SE (StataCorp, College Station, TX, USA). Safety was analyzed using descriptive methods, in the treated population, according to the treatment received by patients who received at least one dose of sorafenib. Kaplan-Meier method was used to calculate the PFS in enrolled patients.

Funding for this study was in part provided by Bayer Schering Pharma AG. The authors acknowledge Mr. Karan Sharma and Dr. Amit Bhat (Indegene, Bangalore, India) for providing medical writing support in preparation of the manuscript with funding from Bayer Healthcare Co Ltd.