An increased peripheral soluble HLA-G (sHLA-G) expression has been observed in various malignancies while its prognostic significance was rather limited. In this study, the prognostic value of plasma sHLA-G in 178 colorectal cancer (CRC) patients was investigated. sHLA-G levels were analyzed by specific enzyme-linked immunosorbent assay. Data showed sHLA-G levels were significantly increased in CRC patients compared with normal controls (36.8 U/ml vs 25.4 U/ml, p = 0.009). sHLA-G in the died were obviously higher than that of alive CRC patients (46.8 U/ml vs 27.4 U/ml, p = 0.012). Patients with sHLA-G above median levels (≥ 36.8 U/ml, sHLA-Ghigh) had a significantly shorter survival time than those with sHLA-Glow (< 36.8 U/ml, p < 0.001), and sHLA-G could be an independent prognostic factor for CRC patients. With stratification of clinical parameters in survival by sHLA-Glow and sHLA-Ghigh, sHLA-G exhibited a significant predictive value for CRC patients of the female (p = 0.036), the elder (p = 0.009), advanced tumor burden (T3 + 4, p = 0.038), regional lymph node status (N0, p = 0.041), both metastasis status (M0, p = 0.014) and (M1, p=0.018), and clinical stage (I + II, p = 0.018), respectively. Summary, our data demonstrated for the first time that sHLA-G levels is an independent prognosis factor and improves the prognostic stratification offered by traditional prognosticators in CRC patients.

In China, CRC incidence and mortality have been increasing during the last decade, resulting in an estimated 376,300 new cases and 191,000 deaths in 2015 [1]. The immune system has proven to play critical roles in tumorigenesis. Various strategies such as induction of regulatory cells, alteration of antigen presentation and production of immune suppressive mediators, have been developed by tumor cells to have a successful immune evasion [2]. For the importance of the host immune system involved in tumor progression, previous literatures have demonstrated the impact of immune-classification (termed Immunoscore), and its prognostic value has been demonstrated superior to the classical TNM classification for CRC [3–5].

HLA-G, a potent immune suppressive mediator firstly observed in cytotrophoblasts, has been observed in various malignancies and strongly associated with tumor immune escape, metastasis and patient survival [6]. HLA-G can be expressed as seven different isoforms, including four membrane bound (HLA-G1 to -G4) and three soluble (HLA-G5 to -G7) molecules. Previous studies revealed that both membrane-bound and sHLA-G isoforms could render multiple immune suppressive effects during the progression of malignancies, with involved mechanisms by inhibiting immune cell function, inducing apoptosis and the generation of regulatory cells through receptor binding and/or trogocytosis, and impairing chemotaxis of different immune effector cells [7, 8].

HLA-G expression was observed in sources such as on the tumor cell, secreted, or in tumor-derived exosomes [9, 10]. A high frequency of tumor cell HLA-G expression and/or increased sHLA-G levels has been found in various body fluids in a variety of cancers [11]. An increased lesion HLA-G expression or peripheral sHLA-G levels were associated with clinical parameters such as advanced disease stage, tumor metastasis and/or worse prognosis in tumor patients [12–14]. In addition to the tumor lesion HLA-G expression was intensively investigated; however, the value of peripheral sHLA-G in prognosis is very limited but now emerging [8, 9].

In this context, previous studies revealed that sHLA-G could be a good diagnostic factor to distinguish benign colorectal related disease from CRC [15]. In gastric cancer (GC), our study indicated that plasma sHLA-G level was a potential biomarker for GC diagnosis [16]. Moreover, circulation sHLA-G levels is an independent risk factor for patients with non small cell lung cancer (NSCLC) was reported in previous studies [17–19].

In this study, plasma sHLA-G levels in 178 CRC patients were tested, and its correlation to clinical parameters and prognosis of the CRC patients was investigated. 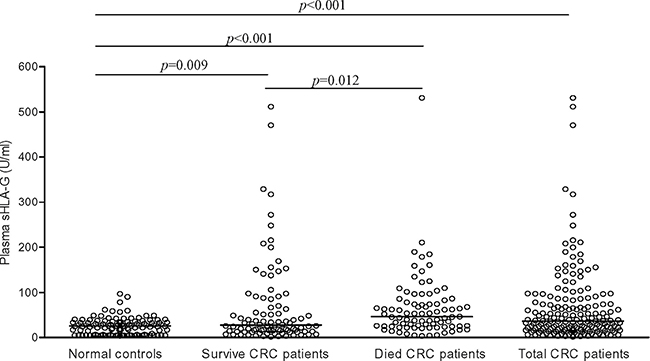 *Comparison of sHLA-G expression status between or among each variable using the Mann-Whitney U test.

To investigate the relationship between plasma sHLA-G and the survival of the CRC patients, sHLA-G was stratified to two groups as below (sHLA-Glow) or above (sHLA-Ghigh) the median of 36.8 U/ml. The significance of other factors for the prognosis such as patient gender, age, extent of primary tumor (T), regional lymphnode status (N), distant metastases (M), and disease stage was also analyzed. 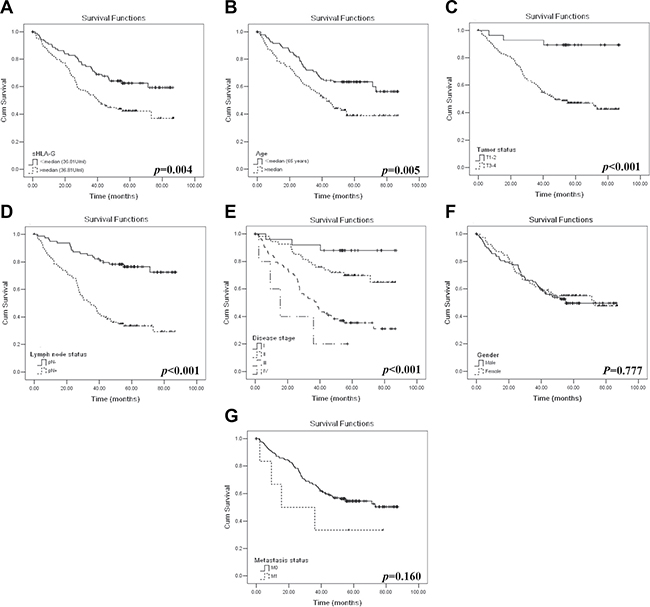 Abbreviations: HR = hazard ratio; 95% CI = 95% confidence interval; Disease stage according to the TNM classification for colorectal cancer (UICC). *If a significant difference was found, the Bonferroni correction was performed (pc).

Then, we analyzed the prognostic significance of sHLA-G with stratification of clinical parameters in CRC patients. Briefly, patient gender were stratified to male and female, age stratified to below and above the median age (65 years), categories T stratified to T1 + 2 and T3 + 4, N stratified to N0 and N1 + 2, M stratified to M0 and M1, and clinical disease stage was stratified to I + II and III + IV, respectively. 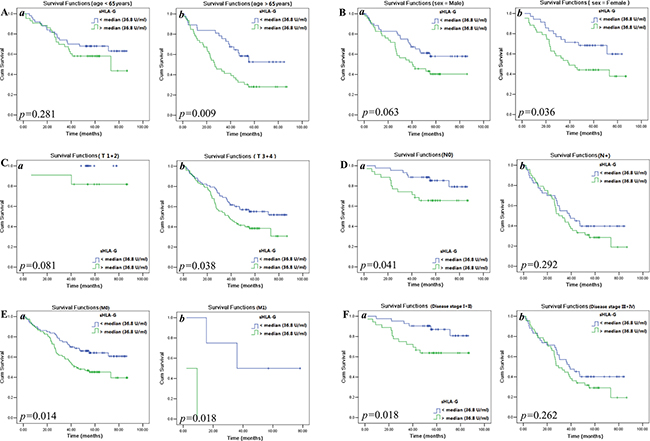 The aberrant HLA-G expression as a clinical biomarker for diagnosis or prognosis has been intensively investigated in tumors [8]. Both membrane-bound and sHLA-G proteins have similar immune suppression functions by directly binding to specific receptors such as immunoglobulin-like transcripts-2 and -4 expressed on immune cells [20, 21]. HLA-G could also induce regulatory CD4+CD25+FoxP3+ T cells, B cells, DCs, NK cells and MDSCs, which provided these immune effectors with a long term immunomodulatory function [22–25].

Given to its immune suppressive property, peripheral sHLA-G could impair host antitumor immune response either locally at the tumor site or systemically via the circulation. Previous studies revealed that plasma sHLA-G are significantly increased in patients with cancers such as lung cancer, breast and ovarian carcinoma as well as in patients with leukemia [26–28]. Beyond its suppressive immune functions, sHLA-G was considered as a diagnostic tool to distinguish between malignant and benign tumors or health controls, and as a prognostic factor in prediction of the disease outcome [16–18, 29].

In this scenario, sHLA-G was significantly increased in CRC patients, and sHLA-G is a powerful item to distinguish CRC from benign colorectal diseases, and the combination of sHLA-G and carcinoembryonic antigen showed a higher detection capacity than individual markers alone [15]. sHLA-G was also showed as a better diagnostic factor than carbohydrate antigen 125 in cervical and gastric cancer patients [16, 30]. In another study, sHLA-G was found exclusively elevated in NSCLC and sHLA-G could be a potent predictor for prognosis, that patients with sHLA-G less than 40 ng/ml have a significantly better survival [18]. In NSCLC patients, our study showed that increased sHLA-G was associated with the advanced disease stage and poor survival [19]. A recent study by Ben Amor et al. [17]. also showed that NSCLC patients with sHLA-G above median level had a significantly shorter survival time and sHLA-G was an independent risk factor for NSCLC patients.

To be noted, clinical outcome significantly varies among patients within the same disease stage; however, the ‘Immunoscore’ components such as CD3+, CD8+ and CD45RO+ T cell infiltration incorporating into traditional classification could improve classical TNM prognostic power [31]. Considering HLA-G is a powerful immune inhibitory antigen [8], whether sHLA-G could improve the performance of traditional predictors in CRC was evaluated in this study. Our study showed sHLA-G could significantly affects the CRC survival when traditional clinical parameters and prognosis predictors were stratified. In the group of sHLA-Ghigh, we found that the female, the elder, and patients with T3+4, N0, M0 and M1, and disease stage I+II, have dramatically poor survival than those with sHLA-Glow.

Taken together, our study revealed that, besides sHLA-G could be an independent prognosis factor, the combination of sHLA-G with other traditional risk factors could improve their prognostic values for the particular subpopulations of CRC patients. Given its immune inhibitory property and prognostic value, sHLA-G in patients with CRC might be a new component for the ‘Immunescore’, contributing an additional significance to the classical cancer TNM classification system.

From April 2007 to May 2013, 178 plasma samples before surgery were consecutively collected from Chinese Han CRC patients (100 males and 78 females, aged from 28 years to 86 years), who were diagnosed and treated at Taizhou Hospital of Zhejiang Province, Wenzhou Medical University. Only patients with histopathologically confirmed of CRC were included in this study. None of the patients received radiotherapy, chemotherapy, or other medical interventions before blood sampling. Patient data including age, gender, date of initial diagnosis, TNM and disease stage were documented. The disease stage was determined according to the 7th TNM staging system by International Union for Cancer Control (UICC) and the American Joint Committee for Cancer (AJCC) [32].

Of 178 cases, the TNM status of 169 cases was available, where 24, 54, 85 and 6 patients with disease stage I, II, III and IV, respectively. Among these cases, 176 patients were available for the follow-up study till the last follow-up date at 25th, September 2014. Overall patient survival was defined as the time from the date of surgery to the date of last follow-up (censored) or patient death (event). The median follow-up for all patients was 47 months (range, 2–91), and during the entire period, there were 85 cancer-related deaths including 2, 17, 55 and 4 patients with stage I, II, III and IV, respectively.

Plasma samples from 113 sex- and age-matched (69 males and 44 females, aged from 22 years to 82 years), unrelated healthy Chinese Han individuals were served as normal controls. Plasma samples of patients and controls were prepared from the peripheral blood by centrifugation at 1500 g for 10 minutes, and stored at –80°C until use. Written informed consent was obtained from each individual, and this study was performed following an Institutional Ethics Review Board approved protocol to investigate molecular markers relevant to CRC pathogenesis.

sHLA-G levels in plasma from 178 CRC patients and 113 unrelated healthy blood donors were determined. sHLA-G concentrations were determined with the sHLA-G specific ELISA kit (sHLA-G kit; Exbio, Prague, Czech Republic), which measures sHLA-G1 and HLA-G5. The optical densities were measured at 450 nm (Spectra Max 250, Molecular Devices, Sunnyvale, CA). The final concentration was determined by optical density according to the standard curves. The detection limits were 1 U/ml. Details of the performance were according to the manufacture’s instruction.

Statistical analysis was performed with SPSS 13.0 software (SPSS, Inc., Chicago, IL). Difference of sHLA-G between groups was analyzed with Mann-Whitney U-test. Overall patient survival was evaluated from the date of surgery to the event of interest or censored on the last follow-up. Survival probabilities were calculated using the Kaplan-Meier method. Differences between survival curves were analyzed by the log-rank test. Univariate and multivariate Cox regression analysis was used to define clinicopathological variables as independent predictors for overall survival. p < 0.05 was considered significant.