Avian leukosis virus subgroup (ALV-J) is an oncogenic neoplasm-inducing retrovirus that causes significant economic losses in the poultry industry. Recent studies have demonstrated circular RNAs (circRNAs) are implicated in pathogenic processes; however, no research has indicated circRNAs are involved in resistance to disease. In this study, over 1800 circRNAs were detected by circRNA sequencing of liver tissues from ALV-J-resistant (n = 3) and ALV-J-susceptible chickens (n = 3). 32 differentially expressed circRNAs were selected for analyzing including 12 upregulated in ALV-J-resistant chickens and 20 upregulated in ALV-J-susceptible chickens, besides, the top five microRNAs (miRNAs) for 12 upregulated circRNAs in ALV-J-resistant chickens were analyzed. Gene ontology and KEGG pathway analyses were performed for miRNA target genes, the predicted genes were mainly involved in immune pathways. This study provides the first evidence that circRNA alterations are involved in resistance to ALV-J-induced tumor formation. We propose circRNAs may help to mediate tumor induction and development in chickens.

Circular RNAs (circRNAs) are recently discovered noncoding RNAs that are highly represented in the eukaryotic transcriptome [1]. Previously regarded as splicing error byproducts [2], circRNAs are mainly formed by back-splicing of covalently jointed 3`-and 5`-ends [3]. Abundant expression of circRNAs that compete with endogenous RNAs has been reported [4]. To date, three types have been reported: circular intronic RNA, exonic circRNA and retained-intron circRNA [5-7]. Several functions have been identified for circRNAs, including RNA transport [8], protein binding [9] and regulation of translation [5]. In 2013, circRNAs were identified as efficient microRNA (miRNA) sponges [10, 11]. Endogenous linear RNAs have the ability to sequester and inhibit miRNA activity [12], indicting the existence of close interactions between circRNAs, miRNAs and mRNAs. Moreover, circRNAs have been associated with diseases, including Alzheimer disease, colorectal and ovarian cancer, idiopathic lung fibrosis and hepatocellular carcinoma [13-15].

The oncogenic retrovirus avian leukosis virus (ALV) causes a major infectious disease that leads to poor egg laying performance in chickens and impacts the poultry industry worldwide [16]. There are seven subgroups of ALV in chickens: ALV-A, -B, -C, -D, -E, -J and –K [17, 18]. ALV-J was first reported in commercial meat-type chickens in England in 1988 [19]. ALV infection spreads by horizontal transmission, vertical or congenital transmission and genetic transmission in flocks [20, 21]. Chickens infected with ALV-J can develop immunosuppression together with diverse tumors, such as myelocytomas, sarcomas, hemangiomas, nephromas and erythroblastosis, as well as myeloid leukosis, and the virus induces high mortality [22-24]. Up to now, no effective vaccine has been developed for ALV-J. The control and eradication of ALV-J from pedigree generations has become a priority in the breeder industry [25]. Breeding chickens that are naturally resistant to ALV-J infection is one potential control measure.

In total, the numbers of reads from the three liver tissue samples from ALV-J-resistant chickens were 71314622, 69193854 and 71259856, resulting in mapped read counts of 55805408, 55911773 and 56634896 respectively (Figure 1A). The numbers of reads from the three tissue samples from ALV-J-susceptible chickens were 65310898, 64652876, 65505628, resulting in mapped read counts of 52943856, 52223375 and 52764699 respectively. Overall, over 1800 circRNAs were detected by circRNA sequencing; the Circos figure for the circRNAs in ALV-J-resistant and -susceptible chickens is shown in Figure 1B. In total, 32 significantly differentially expressed circRNAs were identified in ALV-J-resistant chickens compared to ALV-J-susceptible chickens. A heat map of the 32 differentially expressed circRNAs was generated to illustrate the distinguishable circRNA expression profiling of the samples (Figure 2); As shown in heat map, the number of 0.0, 1.83 and 2.91 on the top represents each circRNA expression level. The each row represents each circRNA and each column represents one sample. Dendrograms from clustering analysis of the samples are exhibited on the top. The left dendrogram separates the expression profiles of the resistant chickens group from the susceptible chickens group. Hierarchical clustering demonstrated the circRNA sequencing data was reliable.

Figure 1: CircRNA sequencing data. (A) Mapping region distribution within read alignments; (B) Circos plots, outline is the reference genome, inside is the chromosome coverage across all samples. 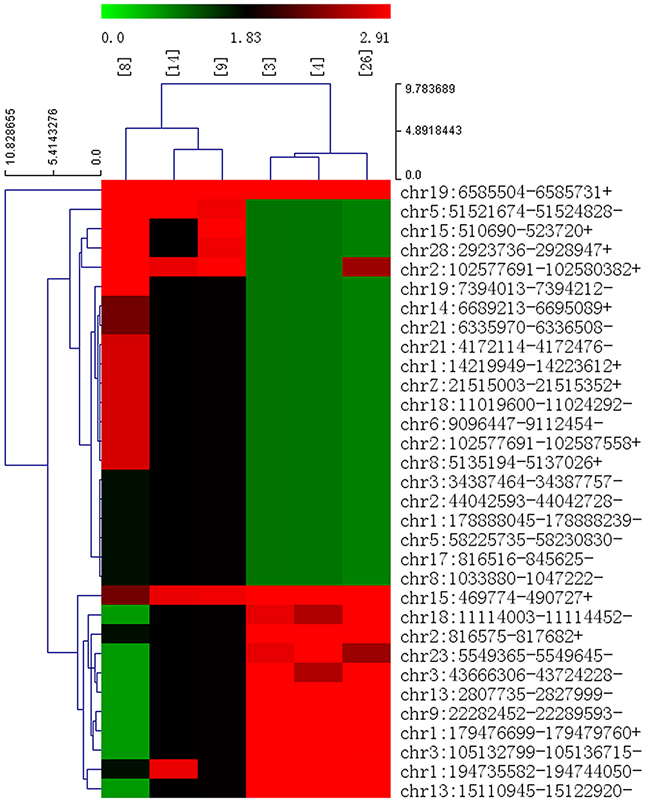 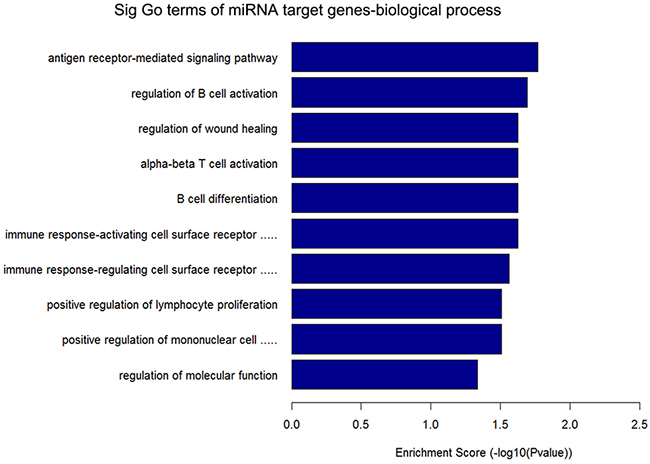 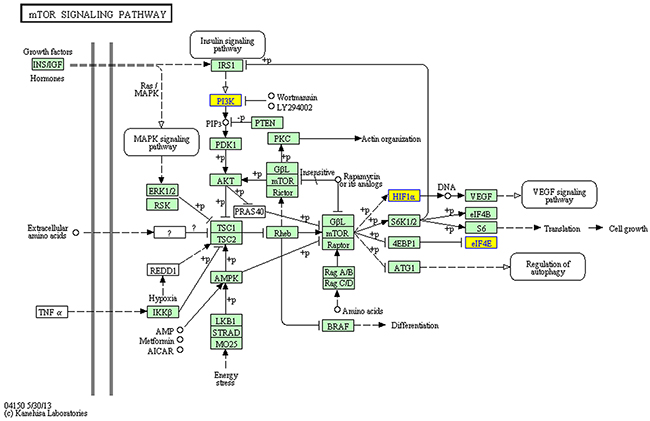 Validation of circRNA expression by qRT-PCR

Two randomly selected circRNAs that were upregulated in ALV-J-resistant chickens (chr1:194735582-194744050- and chr23:5549365-5549645-) and two randomly circRNAs that were downregulated in ALV-J-resistant chickens (chr8:1033880-1047222- and chr5:58225735-58230830-) were selected to validate the expression levels of the significantly differentially expressed circRNAs by quantitative real-time polymerase chain reaction (qRT-PCR). The qRT-PCR data for the four circRNAs was consistent with the trends observed using circRNA sequencing (Figure 5). 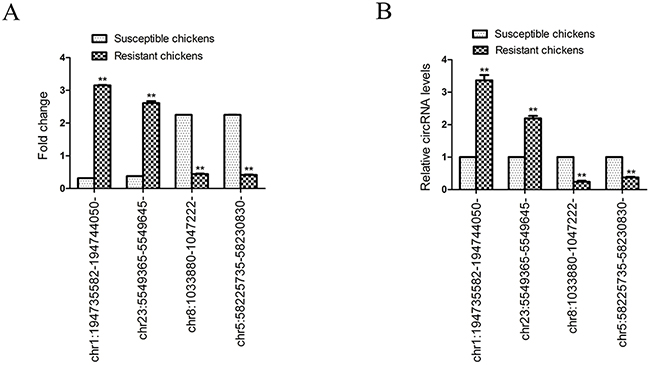 CircRNAs with high number of target sites for a specific miRNA, the top 5 predicted miRNA targets of each circRNA were listed in Table 2. We selected 3 differentially up-regulated circRNAs (chr3:43666306-43724228-, chr9:22282452-22289593- and chr3:105132799-105136715-) and constructed the CircRNA-targeted miRNA-gene network. Each circRNA had 5 predicted miRNA targets, every miRNA target had 10 predicted genes (Figure 6). The network showed that circRNA-targeted miRNA-gene had a strong connection with each other. 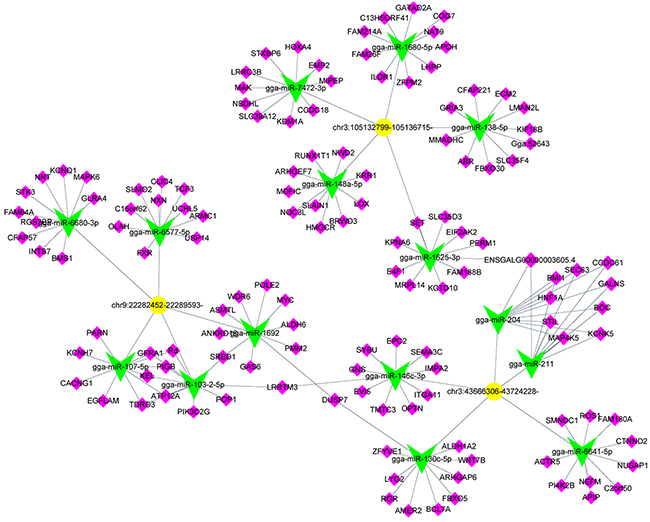 ALV-J is a major pathogen with diverse pathotypes that leads to enormous economic losses. ALV-J has rapidly evolved with respect to its pathogenicity, host range and range of tumors induced [26]. ALV-J-induced tumors among layer-type chickens are one of the most important problems facing the global poultry industry [27]. Although the tumorigenic and pathogenic mechanisms of ALV-J remain unclear and are hot topics of research, no vaccine has been developed to control this disease; therefore, assessment of the host to identify genes associated with resistance to ALV-J-induced tumors may provide a novel method of controlling this problem. In this respect, we previously bred ALV-J-resistant and -susceptible chickens and discovered an anti-tumor gene by RNA sequencing [17].

CircRNAs are a recently discovered type of noncoding RNA that have attracted significant attention [28]. Numerous studies have identified hundreds and thousands of different circRNAs, mostly comprising one to several exons of protein coding genes [14], and circRNAs have been shown to regulate gene expression in mammals [9]. A recent publication indicated that circular RNA was enriched and stable in exosomes and could be a promising biomarker for cancer diagnosis [29], besides, Circular RNA expression alterations were also involved in disease occur and the detailed analysis methods of circRNA alterations were also illustrated [30]. MiRNAs are highly conversed during evolution and negatively regulate target mRNAs. Moreover, a previous study demonstrated that miRNAs play critical roles in tumor formation in chickens infected with ALV-J [31]. However, there is no data on the role of circRNAs in resistance to tumor formation induced by ALV-J or other pathogens in any species. In the current study, we assessed whether circRNAs are involved in resistance to ALV-J-induced tumor formation by analyzing circRNA expression in ALV-J-resistant and -susceptible chickens [17] using circRNA sequencing.

Gene ontology (GO) is a widely used bioinformatics concept that unifies the genes and gene products of all species [32]. High-throughput circRNA sequencing and real-time PCR are standardized approaches used to assess circRNA expression; these methods have been widely used to infer host gene expression in response to disease [33, 34]. Our study demonstrates circRNAs are differentially expressed in ALV-J-resistant chickens, including the 12 upregulated circRNAs, indicating circRNAs are involved in resistance to ALV-J-induced tumor formation. In 2011, an endogenous circRNA was found to be highly expressed in human and mouse brain tissues [35], but the function of this circRNA remained unknown. In 2013, circRNAs were identified as efficient microRNA (miRNA) sponges [10]. Overexpressing miRNA target site concatamers (miRNA sponges) results in loss of miRNA function accompanied by increased endogenous target gene expression [11]. Considering that circRNA can absorb miRNA and Go terms of miRNA target genes of 12 differentially expressed circRNAs that were upregulated in ALV-J-resistant chickens in this study are linked to immune pathways such as antigen receptor signaling pathway and regulation of B cell activation, besides, three of the predicted miRNA target genes in KEGG pathway are associated with the mTOR signaling pathway which is a key regulator of cell growth and proliferation and mTOR dysregulation has a key role to play in various cancers [36], so we suspect circRNAs could be involved in initiation of the immune effects that protect ALV-J-resistant chickens from infection and tumor formation. We propose circRNAs may represent a new mediator of tumor initiation and progression.

Further study of the functions of these circRNAs could improve our understanding of the mechanisms by which circRNAs confer resistance against ALV-J-induced tumor formation. This data also provides a basis for assessing the potential of the differentially expressed circRNAs as novel of biomarkers of resistance to ALV-J-induced tumor formation in chickens. Moreover, this study provides a solid theoretical foundation for further research into the molecular mechanisms by which circular RNAs play a role in the initiation and progression of cancer in chicken.

All experiments were carried out in strict accordance with the recommendations of the Guide for the Care and Use of Laboratory Animals of the National Institutes of Health. The use of animals in this study was approved by South China Agricultural University Committee of Animal Experiments (approval ID: 201004152).

ALV-J-resistant and -susceptible chickens (F3 generation) were used as classical models of resistance or easily-induced tumors in response to ALV-J challenge [17]. The standard ALV-J NX0101 strain which induced myeloid tumors was used in this study. RNA was isolated from livers of three ALV-J-resistant and three ALV-J-susceptible chickens at 20 weeks after challenge with ALV-J. Total RNA was isolated from each group using TRizol reagent (Life Technologies, Carlsbad, CA, USA) according to the manufacturer’s instructions. The concentration of the RNA samples was determined by assessing the OD260/280 using a NanoDrop ND-2000 instrument (Thermo, Waltham, MA, USA). The integrity of the RNA samples was assessed by denaturing agarose gel electrophoresis.

Total RNA from each sample was used to prepare the circRNA sequencing library, via the following steps: 1) 5 μg total RNA samples were pretreated to enrich circRNAs using the CircRNA Enrichment Kit (Cloud-seq Inc., Shanghai, China). RNA libraries were constructed from the treated RNAs using the TruSeq Stranded Total RNA Library Prep Kit (Illumina, San Diego, CA, USA) according to the manufacturer’s instructions. Libraries were controlled for quality and quantified using the BioAnalyzer 2100 system (Agilent Technologies, Inc., Santa Clara, CA, USA). The libraries were denatured as single-stranded DNA molecules, captured on Illumina flow cells, amplified in situ as clusters and finally sequenced for 150 cycles on an Illumina HiSeq Sequencer according to the manufacturer’s instructions.

Paired-end reads were harvested from the Illumina HiSeq 4000 sequencer and quality controlled using Q30 [37]. After 3’ adaptor-trimming and removal of low quality reads using Cutadapt software [38], the high quality trimmed reads were used for analysis of circRNAs. The high quality reads were aligned to the reference genome/transcriptome using bowtie2 software and circRNAs were detected and identified using find_circ software [39, 1]. Raw junction reads for all samples were normalized to the number of total mapped reads and log2 transformed. Circos software was used to construct the circos figure [40]. CircRNAs exhibiting fold changes ≥ 2.0 with P-values ≤ 0.05 were classified as significantly differentially expressed circRNAs.

CircRNA and miRNA interactions were predicted using customized Arraystar miRNA target prediction software based on TargetScan and miRanda [41, 42]; the top five putative target miRNAs were identified for upregulated circRNAs in ALV-J-resistant chickens. The putative target genes of these miRNAs were identified using Targetscan [41]. Cytoscape software was used to construct the circRNA-miRNA-gene networks [43]. Gene ontology (GO) and Kyoto Encyclopedia of Genes and Genomes (KEGG) analysis were performed for the differentially expressed circRNA-associated genes [44, 45].

Data are expressed as mean ± standard deviation (SD). The Student’s t-test was used to assess differences among groups; P < 0.05 was considered significant.