Poorly differentiated (PD) hepatocellular carcinoma (HCC) has a worse prognosis compared to moderately differentiated (MD) and well differentiated (WD) HCC. We aimed to identify differentially expressed genes (DEGs) to explore the mechanism of PD HCC. Transcriptome sequencing was performed on tumor and adjacent non-tumorous tissues of PD, MD and WD HCC patients (3 for each group). DEGs were thus identified and functionally analyzed. Further RT-PCR was performed to validate DEGs specific for PD HCC in 47 pairs of samples (15 for PD, 18 for MD, 14 for WD). A total of 681 PD DEGs were detected, including 368 up-regulated and 313 down-regulated genes. Less DEGs were found for MD and especially for WD HCC. Through bioinformatics analysis, PD HCC DEGs were enriched in liver tissue and liver cancer cells, and in biological process and pathway including metabolism, cell cycle, translation and blood coagulation. Potential drugs and genetic perturbations were found to reverse the cancer condition. The RT-PCR results showed consistency with RNA-seq in the validation of 4 DEGs specific for PD HCC. This study detected and validated DEGs of PD HCC, which provides useful information on molecular mechanism of PD HCC for development of new biomarkers, therapeutic targets and drugs.

As one of the most common malignancies worldwide, hepatocellular carcinoma (HCC) represents the second-leading cause of cancer deaths globally with 745,000 deaths per year [1]. The HCC were categorized into poorly-, moderately-, and well- differentiated types. Hepatic resection is currently the most optimal choice for HCC treatment. However, poorly differentiated HCC has a worse prognosis with high recurrence rate compared to other two types [2, 3]. In addition, it is hard to discriminate poorly differentiated HCC from other two types of HCC before treatment. The lack of good diagnostic markers and therapeutic targets has rendered HCC a major challenge.

Recently, high-throughput technologies like RNA sequencing make it possible and easy to illustrate the transcriptome characteristics of cancers including HCC [4]. Some potential biomarkers for HCC were identified using transcriptome sequencing e.g. SERPINA11 whose expression is correlated with pathology stages lack documented expression profiles in liver cancer [5]. Some signaling pathways like cell cycle were also involved via analysis of transcriptome sequencing data [6]. Those studies show a great promise of exploring the molecular basis of HCC.

In this study, we performed transcriptome sequencing for patients with poorly differentiated (PD), moderately differentiated (MD) and well differentiated (WD) HCC. 3 patients diagnosed as HCC of each grades were recruited, respectively. Differentially expressed genes (DEGs) were identified through analysis of transcriptome sequencing data. DEGs were then subjected to gene set enrichment analysis. Furthermore, RT-PCR was performed to validate potential biomarkers in 15 pairs of poorly differentiated tumor and adjacent non-tumorous samples. Our investigation may provide new clues on the molecular event responsible for the progression of HCC and potential biomarkers and therapeutic targets for diagnosis and treatment of HCC patients.

Pair-end second-generation transcriptome sequencing was performed in 9 HCC patients. Sample characteristics were shown in Table 1. An average of 35,772,695 pair-end 125 bp clean reads was generated (Table 2). The average mapping rate was 93.17%, resulting an average coverage of depth of 32 × (Table 2). Expression levels of more than 25,200 genes were calculated using Tophat/Cufflinks (Supplementary Table 1). The heatmap of all expressed genes were drawn in Figure 1, which showed a big group of differentially expressed genes (DEGs) between tumor and adjacent non-tumorous samples of poorly differentiated HCC.

Table 1: Detailed characteristics of the patients

Note: The nine samples used for sequencing are labeled in bold and italic. 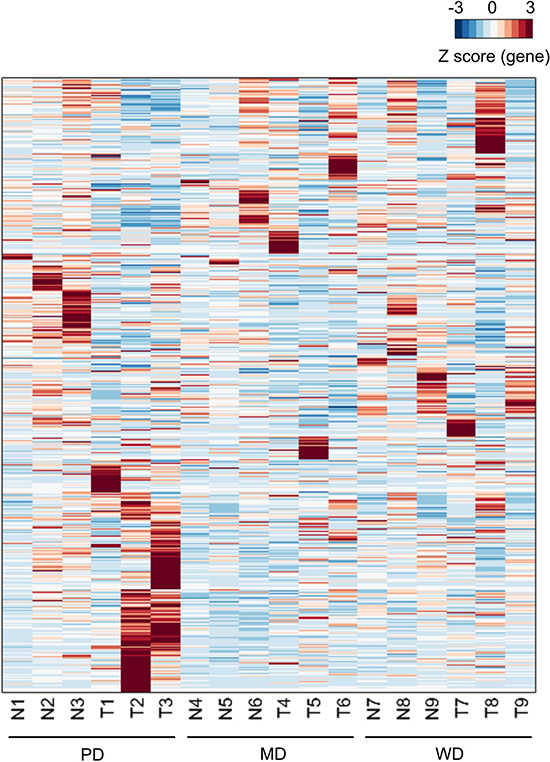 Identification of DEGs between tumor and adjacent non-tumor tissues 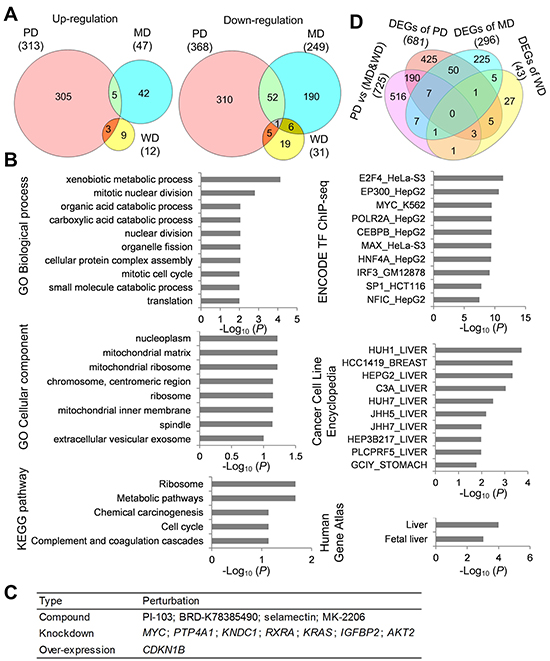 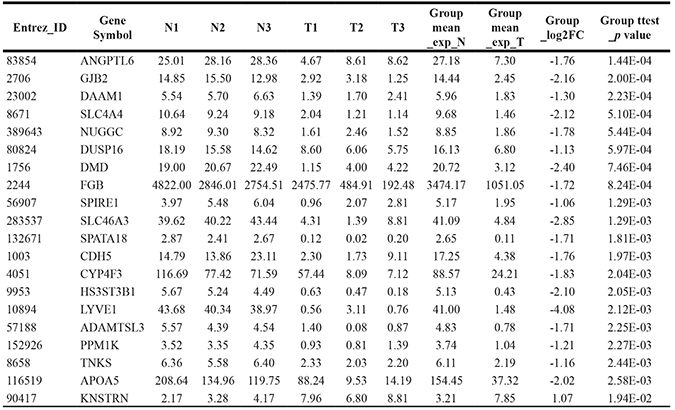 LINCS is a collection of signatures of gene expression for a broad range of conditions such as drug treatment, ligand treatment, gene knockdown, and gene over-expression in many different types of human cells [8]. We inputted the up-regulated genes and down-regulated genes into lincscloud to find perturbations that had opposite gene expression change with differentiated HCC. Top 12 perturbations with high negative connectivity scores (Figure 2C), which included 4 compounds, 7 knockdown genes and 1 over-expression gene.

Comparison of tumor tissues between PD HCC and MD&WD HCC

Besides DEGs between tumor and adjacent non-tumorous samples, we compared tumor tissues between PD HCC and MD&WD HCC. As a result, 725 differentially expressed genes were identified (Supplementary Table 2); among them, 209 were identified as DEGs when comparing tumor and adjacent non-tumorous samples (Figure 2D). Gene ontology enrichment analysis was also done based on this 725-gene list. Similarly, these genes were enriched in organelle fission, mitotic nuclear division, positive regulation of cell cycle phase transition and serine family amino acid catabolic process.

Validation of DEGs specific for poorly differentiated HCC by RT-PCR 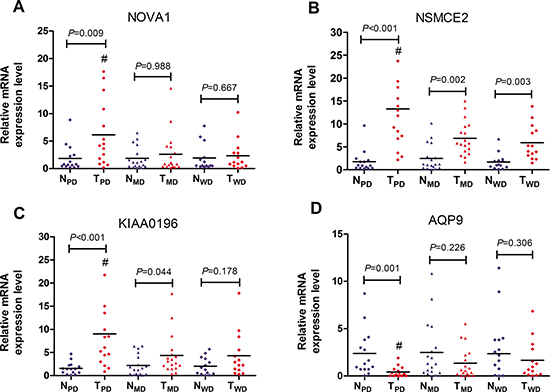 We have applied the transcriptome sequencing approach to illustrate the gene expression characteristics of poorly differentiated HCC. The number of DEGs for poorly differentiated HCC is significantly bigger than that of other two stages. Those DEGs are enriched in liver tissue and cells, which is easily understood. Pathway analysis showed that two pathways, cell cycle and complement and coagulation cascades, were overrepresented with DEGs. Deregulation of the cell cycle pathway is expected since uncontrolled cell division is the major character of cancer cells. As for the complement and coagulation cascades pathway, consistent with our results, both gene expression [9] and proteomics [10] analysis have shown that this pathway is related to the pathogenesis of HCC. Some transcription factors were found to regulate the DEGs. For example, HNF4-α could represent a central regulator of gene transcription in hepatocytes, and a strong candidate to be involved in liver cancer cell development [11]. In addition, we also compared tumor tissues between PD HCC and MD&WD HCC. And similarly, the differentially expressed genes are enriched in the process of cell cycle and division.

After query of the poorly differentiated HCC signature in the LINCS server in our study, some compounds, knockdown genes and overexpression genes were found to have strong negative connections with the signature. PI-103 is a potent ATP-competitive dual inhibitor of phosphatidylinositol 3-kinase (PI3K) and mTOR (mammalian target of rapamycin). The combination of PI-103 and sorafenib was found to inhibit hepatocellular carcinoma cell proliferation by blocking Ras/Raf/MAPK and PI3K/AKT/mTOR pathways [12]. MK-2206 is an oral selective allosteric inhibitor of Akt that targets all three isoforms of human Akt (Akt-1, Akt-2 and Akt-3). MK2206 was found to inhibit hepatocellular carcinoma cellular proliferation via induction of apoptosis and cell cycle arrest [13]. Among 8 genetic perturbations, 5 genes are enriched in pathways in cancer or PI3K-Akt signaling pathway (p<0.001). Myc proto-oncogene protein (MYC) as a transcription factor can activate the transcription of growth-related genes. HCC is frequently associated with overexpression of MYC. In this study, MYC is up-regulated in the poorly differentiated HCC. Knockdown of oncogenic KRAS was found to suppress tumor growth in non-small cell lung cancers [14]. As mentioned, AKT2 is the target of MK2206, knockdown and inhibition of AKT2 may both help to reverse HCC. Overexpression of cyclin dependent kinase inhibitor 1B (CDKN1B) has the reverse effect in our study. CDKN1B binds to and prevents the activation of cyclin complexes, and thus controls the cell cycle progression at G1 [15]. All those perturbations may be the potential therapies or targets for treatment of HCC. In the validation cohort, further RT-PCR was performed to validate 4 DEGs specific for poorly differentiated HCC, of which NOVA1, NSMCE2 and KIAA0196 were significantly up-regulated, while AQP9 was significantly down-regulated in poorly differentiated samples, as compared with that in 9 adjacent non-tumor samples, 3 moderately differentiated samples and 3 well differentiated samples. The RT-PCR results showed consistency with RNA-seq. Interestingly, these DEGs were closely related with cell cycle or proliferation. High expression of NOVA1 was found correlated with poor survival rate and increased recurrence rate in HCC [16]. NSMCE2 was required for G1-S transition in breast cancer cells and manipulation of NSMCE2-mediated sumoylation may alter the growth rates of breast cancer cells [17]. KIAA0196, involving in meiosis-related spindle assembly [18], has been showed increased expression in clinical prostate carcinomas and also amplified in 30-40% of xenografts and hormone-refractory tumors [19]. However, AQP9 has been found to be down-regulated in hepatocellular carcinoma and its over-expression suppresses hepatoma cell invasion through inhibiting epithelial-to-mesenchymal transition [20]. In conclusion, this study explored the molecular mechanism of hepatocarcinogenesis through assessment of RNA seq data of HCC and validation of 4 DEGs specific for poorly differentiated HCC in an independent cohort. It provides useful information on the transcriptomic landscape as well as a mechanistic overview of HCC. Our findings offer novel insights and useful support in biomarker development and suggest new potential targets in poorly differentiated HCC characterization.

Our study design was approved by the Ethics Committee of the Fujian Provincial Hospital. Written informed consent was obtained from all subjects.

47 subjects were diagnosed as primary HCC in the Fujian Provincial Hospital (Table 1), of which 33 subjects were present with cirrhosis on the non-neoplastic background, including 29 subjects with hepatitis B virus (HBV), 1 subjects with hepatitis C virus (HCV) and 3 subjects with NBNC. HBV related tumors were defined according to the presence of HB surface antigen (HBsAg) in serum, and HCV related tumors were according to the presence of antibody to HCV (HCVAb) in serum. NBNC tumor was defined according to the absence of both HBsAg and HCVAb in serum. Primary tumor and adjacent non-tumorous samples were obtained from all patients who underwent surgical tumor resection. All samples were frozen immediately at –80°C until RNA extraction. Total RNA was isolated by using RecoverAll™ Total Nucleic Acid Isolation Kit (Life Technologies, Carlsbad, CA, USA). Integrity of RNA was assessed by Agilent 2100 bioanalyzer (Agilent, Santa Clara, CA, USA). RNA from nine samples was subjected to sequencing and all samples were used in the validation experiments.

Raw sequencing reads were firstly filtered for adapters and ribosomal RNA. Reads containing five or more low quality (quality score < 20) bases were also removed. The remained high-quality reads were then aligned to human genome (hg19) by using Tophat [21]. The mapped reads were then subjected to alignment against the human transcriptome (Ensembl, GRCh37.73). Gene expression level measured by FPKM (fragments per kilobase per million) was calculated by Cufflinks [22].

For each differentiated HCC group, DEGs between the tumor and matched non-tumorous tissues were identified with pair-wise t test and the significant threshold was set as adjusted p-value of less than 0.05 and |log2(fold change, FC)| > = 1. Enrichr was used to do functional enrichment analysis like Gene Ontology (GO) and KEGG pathway [7]. The significant threshold for enrichment was set as p < 0.1. In addition, the list of up-regulated genes and down-regulated was uploaded into lincscloud [8] to find perturbations which can reverse the cancer condition. Using similar methods (t test instead of paired t test), DEGs were identified and analyzed between tumor tissues of PD HCC and those of MD&WD HCC.

All authors declare that they have no any conflicts of interests.

This study was supported by the Middle-Young Age Backbone Talent Cultivation Program of Fujian Health System, No. 2013-ZQN-JC-2; and Key Projects of Science and Technology Plan of Fujian Province, No. 2014Y0009.