Despite combined treatment with surgical resection and adjuvant chemotherapy, 25–40% of patients with stage II-IV Gastric cancer (GC) experience relapse [1, 2]. Large-scale molecular profiling of GC, as reported in The Cancer Genome Atlas (TCGA) and Asian Cancer Research Group (ACRG), identified multiple cancer drivers as potential therapeutic targets [3, 4]. However, chemotherapy remains the only treatment option for patients diagnosed with advanced GCs with dismal outcome, with the exception of trastuzumab for a HER2-positive GC subset, based on the results of the TOGA trial [5].

Advances in genome sequencing technology have allowed the identification of potential therapeutic targets using formalin fixed paraffin embedded (FFPE) tumor biopsy specimens within a timeframe compatible with clinical practice [6]. Using a genome forward designs, clinical trials have been conducted to investigate the efficacy of targeted agents against specific molecular aberrations in a single or multiple tumor types [7–11]. Findings from histology-agonistic approaches demonstrated improved progression free survival (PFS) and overall survival (OS) compared to those achieved with non-matched therapy [11, 12]. However, in randomized trial with heavily treated solid tumors, targeted agents did not improve the PFS over physician’s choice [9]. As a histology-dependent approach, BATTLE and SAFIRO01 trials established the feasibility of a genome forward approach in lung and breast cancer patients [7, 13].

Regarding GC, despite recent studies with comprehensive molecular profiling [3, 4, 14, 15], no clinical data demonstrating target-drug efficacy in the context of umbrella studies have been published yet. In addition, the very small sizes of FFPE gastric biopsy specimens pose practical and technical challenges often result in sequencing assay failures due to low yield and poor quality of extracted DNA. Therefore, we combined Ion Torrent PGM based amplicon sequencing (Oncomine Focus Assay, Thermo Fisher Scientific, Waltham, MA, USA) with an immunohistochemistry (IHC) panel to maximize the chance of assignment of enrolled patients to potentially beneficial targeted therapies. We also aimed to assess whether our genome forward umbrella approach could improve patient outcomes when compared to non-matched, standard chemotherapy for advanced/metastatic GC.

For all 81 cases, we profiled 10 molecular markers using IHC and in situ hybridization (ISH). From a combination of markers, we observed a median of 1 genomic aberration per case (range 0–4). Of those, Epstein-Barr virus (EBV) was identified by ISH in 3 (3.7%) case, and 2 of those harbored the PIK3CA Q546K mutation upon NGS. Mismatch repair (MMR) deficiency was demonstrated in 5 (6.2%) cases, all of which exhibited simultaneous losses of MLH1 and PMS2 expression. Receptor tyrosine kinase (RTK) overexpression occurred in 46 (56.8%) cases, when scores of 2+ and 3+ were defined as positive expression. [16] PTEN loss was observed in 15 patients (18.5%).

Patients with or without molecular aberrations 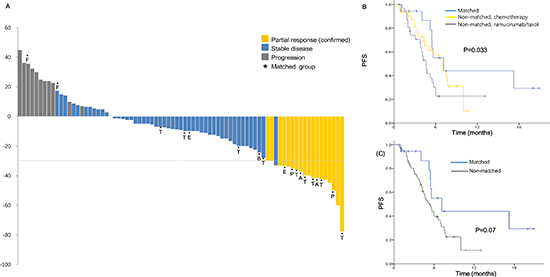 Two patients with PIK3CA Q546K mutation were enrolled in a phase IB clinical trial with Akt inhibitor. The first GC patient (Case #3 in Figure 1) presented with hepatic metastases was treated with 200 mg of daily afuresertib combined with weekly paclitaxel as second line treatment. A computed tomography (CT) scan at the end of cycle 3 (12 weeks) showed cPR to treatment with a 41.8 % reduction (Figure 4A). The patient was removed from the study with a time to progression of 25 weeks. Second case (Case #1 in Figure 1) was 67-year-old male with paraaortic and hepatic metastases. He was treated with afuresertib and paclitaxel. A CT scan at 16 weeks demonstrated cPR with a 37.7% tumor reduction (Figure 4B), and he remains on treatment after 17 weeks. 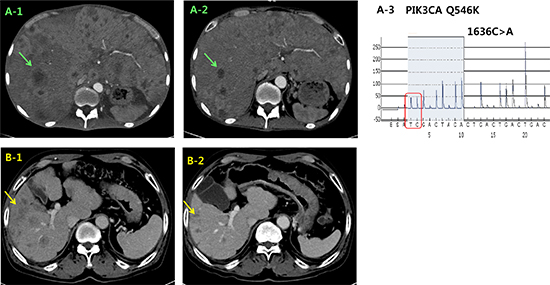 Figure 4: Representative clinical responses of 2 PIK3CA mutant cases in the matched group that were treated with the combination of an Akt inhibitor and paclitaxel. CT images of case #3 during the treatment course. The initial liver metastasis (A1) exhibited a significant size reduction (A2) after 12 weeks. (A3) PIK3CA exon 9 Q546K mutation was detected by pyrosequencing. CT images of case #1 at the time of baseline (B1) and at 16 weeks (B2). CT: computed tomography.

The third case (Case #10 in Figure 1) developed multiple hepatic recurrences 7 months after curative resection (initially stage IB). The tumor was PTEN loss (with H-score 60 out of 300) and he was treated with 300 mg of daily GSK2636771 in combined with weekly paclitaxel. A CT scan at 12 weeks demonstrated stable disease with a 24% tumor reduction (Figure 5A) and he remains on treatment after 25 weeks.

In recognition of inter-patient molecular tumor heterogeneity, NGS-based basket trials with specific molecular aberrations across multiple tumor types were widely studied [9–11]. However, in SHIVA trial, the off-label use of molecularly targeted agents did not improve PFS in heavily pretreated cancer patients when compared with physician’s choice [9]. As demonstrated by the different efficacy of BRAF inhibitors in melanoma and colon cancer [17], the inclusion of multiple tumor types with the same molecular target in a basket trial might introduce an important source of heterogeneity and could lead to negative results.

Genomic profiling of biopsied metastatic lesions often presents practical challenges because of the small quantities of available samples. The OCA, which is based on Ion Torrent PGM amplicon sequencing platform is currently used as a screening platform for the NCI MATCH study because of its low sample requirement (20 ng DNA and 10ng RNA from FFPE specimens), and ability to detect CNAs and gene fusions as well as SNVs. The OFA is a subset of OCA that mainly targets actionable cancer drivers. The success rate of our genomic analyses (71%, 66 /93) was similar to those reported trials that used large-scale genomic analyses, with main reason of failure being low cellularity and DNA contents [7, 9, 12].

Despite the known difficulty of reliable CNA detection from amplicon-based targeted sequencing data (because of variable amplification efficiency across targets) [14, 18], OFA with a proprietary analysis pipeline with in silico reference normal tissue data could identify 17 CNAs, 16 (94.1%) of which were validated by ISH. However, the IHC panel was able to identify an additional 5 ERBB2 amplified cases, which were confirmed by ISH. OFA alone would have missed 23% of the CNAs. On the other hand, the additional 5 candidate CNAs identified by the IHC panel (no NGS amplification, 3+ RTK overexpression by the IHC panel) were not detected by ISH or NGS. Overall, more than a half (n = 11) of the decisions regarding matched therapy were made based on IHC, underscoring the importance of combining NGS with an IHC panel. By applying a more sophisticated approach that incorporated both IHC and NGS, our cancer profiling led to the use of matching therapy in a greater proportion of cases (23.5%), as well as a higher ORR than with previous studies [7, 9].

There are some important issues must be considered when interpreting of this study. First, this was not a randomized study, and therefore results must be interpreted cautiously. However, PFS of the non-matched (control) group in our study was consistent with those reported in phase III randomized trials in support of our results; for example, our study showed a PFS of 4.6 months in the non-matched ramucirumab/paclitaxel group, compared with 4.4 months in the ramucirumab/paclitaxel group from the RAINBOW trial [19]. Second, approximately 40% cases receiving matched therapy is ERBB2 amplified cases, which is already been identified as a standard biomarker of advanced GC. However, we believe that the inclusion of ERBB2 amplified cases in our analyses is justified as the primary purpose of the umbrella approach is the identification of all therapeutic targets at the time of diagnosis, thus avoiding the need to successively evaluate single markers over time. Accordingly, ERBB2 positivity, a main genetic aberration of GC, should be included in this type of study. In support of our approach, two-thirds of matched group was treated according to clinical practice in the NEXT-1 trial [18], and EGFR-mutant NSCLCs were also included in the analyses of the BATTLE and CUSTOM trials [10, 13]. Interestingly, one case (case #25) has co-occurrence of EBV positivity and FGFR2 amplification. Tumor was not responded to FGFR2 inhibitor and efficacy of immune checkpoint inhibitor needs to be determined. Finally, the algorithms used to interpret genomic data and assign targeted therapies need to be improved in the era of immunotherapy and DNA repair modulation.

In this study, we have demonstrated that a combined NGS and IHC analysis of FFPE samples is a feasible method for the identification of targetable genomic alterations in patients with metastatic GC. In addition, identification of specific molecular aberrations and assignment of targeted therapy were associated with better responses and survival supportive for future randomized trial.

This study had the following objectives: (1) to test the feasibility of NGS based genomic profiling of small FFPE tumor biopsies routinely produced for diagnostic purpose, in a time frame feasible for clinical practice; (2) to assign patients to matched therapy based on genomic aberrations; and (3) to explore the potential clinical benefit of a genome-forward approach over conventional chemotherapy.

The study scheme is outline in Appendix Figure 1. A consecutive cohort of 93 patients with advanced/metastatic GC who underwent palliative chemotherapy at Severance Hospital, Yonsei University College of Medicine, Seoul, Korea between March 2015 and December 2015 was enrolled in this study. Of those, 12 were excluded from genomic analysis [insufficient tumor cellularity, 11 patients (11.8%); lost to follow-up, 1 patient (1.0%)]. Among the remaining 81 patients, complete NGS and IHC profile were successfully obtained for 66 cases (81.5%). For the remaining 15 cases (18.5%), only IHC data were available because of failed quality control for the NGS analyses (insufficient DNA yield, 8 patients; poor DNA quality, 7 patients). The study was approved by the institutional review board (IRB. 4–2014-0349).

In situ hybridization for amplification

Assignment to a matched therapy was determined after reviewing the clinical, laboratory, and pathologic data from all available patient records. Patients whose tumors harbored molecular aberrations were preferably considered for clinical trials with a matched therapy, when available with the following prioritization criteria. (1) Actionable molecular aberrations, wherein any mutation, deletion, or amplification was deemed to be of greater importance; in case with no aberrations, loss of protein of IHC expression was selected. (2) The allocation of patients to investigational treatment varied over time according to the availability of ongoing clinical trials, and off-label treatment, as well as the patient’s or physician’s preference.

The χ2 test was used to assess the correlation between marker status and clinical significance. All the tests were 2-sided, and P values of < 0.05 were considered significant. Responses were assessed according to the Response Evaluation Criteria in Solid Tumors (RECIST) criteria version 1.1 [28]. PFS was defined from the first day of treatment to the time of disease progression or death. OS was measured from the time of surgery to death or the last follow-up date and evaluated by survival analysis using the Kaplan-Meier method with a log-rank test. All statistical analyses were performed using SPSS version 18.0 (IBM, Chicago, IL, USA).

This research was supported by a grant of the Korea Health Technology R&D Project through the Korea Health Industry Development Institute (KHIDI), funded by the Ministry of Health & Welfare, Republic of Korea (grant number : HI13C2162, Soonmyung Paik), a grant from the National R&D Program for Cancer Control, Ministry of Health and Welfare, Republic of Korea (grant number : 1520190, Sun Young Rha), and a grant supported by the “Dongwha Holdings” Faculty Research Assistance Program of Yonsei University College of Medicine for 2015 (6-2015-0169, Hyo Song Kim).