Despite advances in combination therapies involving surgery, radiotherapy, chemotherapy, and currently available molecular-targeted therapy for head and neck squamous cell carcinoma (HNSCC), the survival rate of patients with this disease has not improved [1–3]. HNSCC develops in the mucous membranes of the nasopharynx, oral cavity, oropharynx, larynx, and hypopharynx [4]. Among patients with HNSCC, hypopharyngeal squamous cell carcinoma is one of the most aggressive malignancies and has an extremely low survival rate due to the high rates of locoregional recurrence and distant metastasis [1, 5]. Control of cancer recurrence and metastasis may lead to improvement of HNSCC disease prognosis. Therefore, it is needed to improve our understanding of the molecular pathogenesis of HNSCC aggressiveness using current genomic-based strategies.

MicroRNAs (miRNAs) act as fine-tuners that regulate the expression control of protein-coding/protein-noncoding genes by sequence depending manner [6]. A vast extent of studies have reported that dysregulation of miRNA expression is involved in the pathogenesis of human cancers, including HNSCC [7, 8]. As a unique nature of miRNA biogenesis, a single miRNA can control thousands of target RNAs [9]. Thus, identification of novel cancer networks mediated by dysregulated miRNAs may provide insight into the pathogenesis and treatment of cancer.

In this study, we newly constructed the RNA sequencing-based miRNA expression signature of HNSCC using laryngeal and hypopharyngeal clinical specimens. Our present data showed that 160 miRNAs (44 upregulated and 116 downregulated) were aberrantly expressed in cancer tissues. Among the downregulated miRNAs, we focused on the dual strands of pre-miR-150, i.e., miR-150-5p and miR-150-3p, in the HNSCC signature. Both of these miRNAs were markedly reduced in HNSCC tissues, indicating that these miRNAs may act as antitumor miRNAs in HNSCC cells. However, the roles of these miRNAs and their targets in HNSCC cells are still unclear.

It is generally accepted in miRNA biogenesis that processing of the pre-miRNA through Dicer1 generates a miRNA duplex (a passenger strand and a guide strand). It is thought that guide strand of miRNA is incorporated into the RNA-induced silencing complex (RISC) to target messenger RNAs, whereas the passenger strand of miRNA is degraded and has not functioned regulatory activity in cells [23–25]. The aim of this study was to investigate the antitumor functions of both strands of pre-miR-150 (miR-150-5p and miR-150-3p) and to identify their targeted oncogenic genes and pathways in HNSCC cells. Elucidation of antitumor miRNA-mediated cancer networks may provide novel insights into the molecular pathogenesis of HNSCC.

In this study, a total of 116 downregulated miRNAs and 44 upregulated miRNAs were detected from aligned reads using R program (Table 2 and Supplementary Tables 4A and 4B). 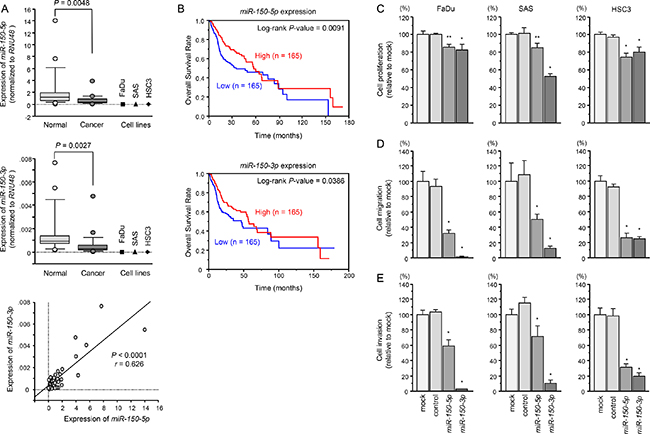 We hypothesized that passenger strand of miR-150-3p might be incorporated into the RISC and functioned in cancer cells. We performed immunoprecipitation with antibodies targeting Ago2, which plays a central role in the RISC. After transfection with miR-150-5p or miR-150-3p, Ago2-bound miRNAs were isolated, and RT-qPCR was carried out to determine whether miR-150-5p and miR-150-3p bound to Ago2 (Supplementary Figure 1B).

After transfection with miR-150-5p and immunoprecipitation by anti-Ago2 antibodies, detection level of miR-150-5p was significantly higher than those of mock- or miR-control-transfected cells and those of miR-150-3p-transefected SAS cells (P < 0.0001; Supplementary Figure 1C). Likewise miR-150-5p transfection, miR-150-3p was detected by Ago2 immunoprecipitation (P < 0.0001; Supplementary Figure 1C).

The anti-tumor roles of miR-150-5p and miR-150-3p were in investigated by using mature miRNA transfection into cancer cell lines, FaDu, SAS and HSC3.

To identify putative target genes coordinately regulated by miR-150-5p and miR-150-3p, we performed applied to combination of in silico analyses, oligomicroarray expression analyses, and Gene Omnibus database (GEO) analyses. Our strategy for selection of putative target genes that were coordinately regulated by miR-150-5p and miR-150-3p is shown in Figure 2A. 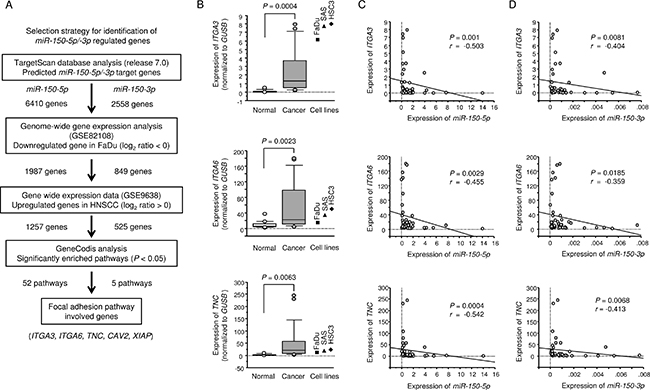 Finally, we categorised these putative target genes into Kyoto Encyclopedia of Genes and Genomes (KEGG) pathways using the GeneCodis database, and 52 and 5 pathways were listed as putative miR-150-5 and miR-150-3p regulated pathways (Tables 3 and 4). Among these pathways, we focused on the focal adhesion pathway because both miR-150-5p and miR-150-3p markedly inhibited cancer cell migration and invasion (Figure 1D and 1E). Five genes (TNC, ITGA3, ITGA6, CAV2, and XIAP) were found to be regulated by both miR-150-5p and miR-150-3p in this pathway (Tables 5 and 6).

We next performed qRT-PCR analyses of 3 HNSCC cell lines to investigate whether restoration of miR-150-5p or miR-150-3p expression altered the mRNA expression of these 5 genes. The mRNA expression levels of these 5 candidate genes are shown in Figure 3A and Supplementary Figure 3A. Among 5 genes, we focused on ITGA3, ITGA6, and TNC genes because aberrant integrin-mediated signalling promoted cancer cell aggressiveness according to our previous studies [21, 22, 26]. Moreover, two genes CAV and XIAP have been involved in cancer pathogenesis including HNSCC by past studies [27–30]. The analysis of the expression control of these two genes by miRNAs is important theme. 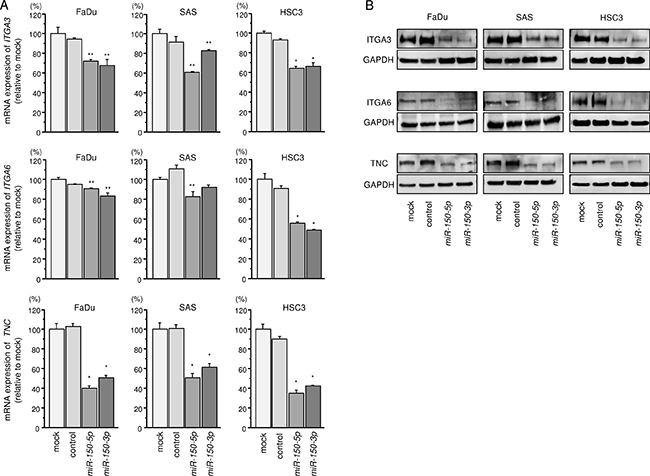 Regulation of ITGA3, ITGA6, and TNC expression by miR-150-5p and miR-150-3p in HNSCC clinical specimens and HNSCC cells 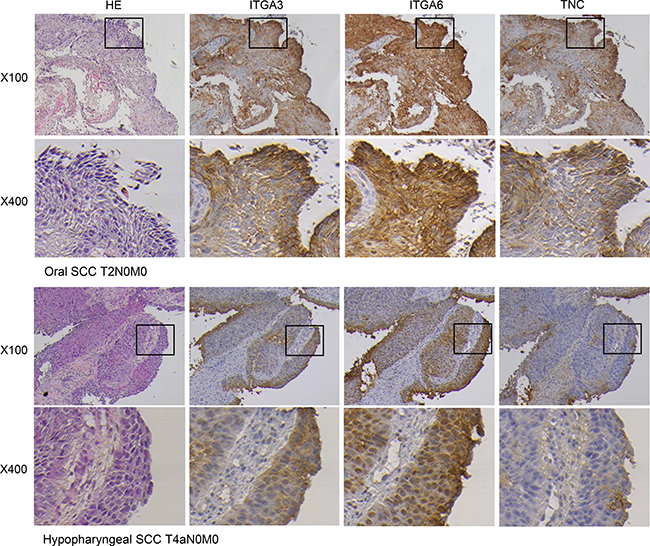 Effects of ITGA3, ITGA6, and TNC knockdown on cell proliferation, migration, and invasion in FaDu cells 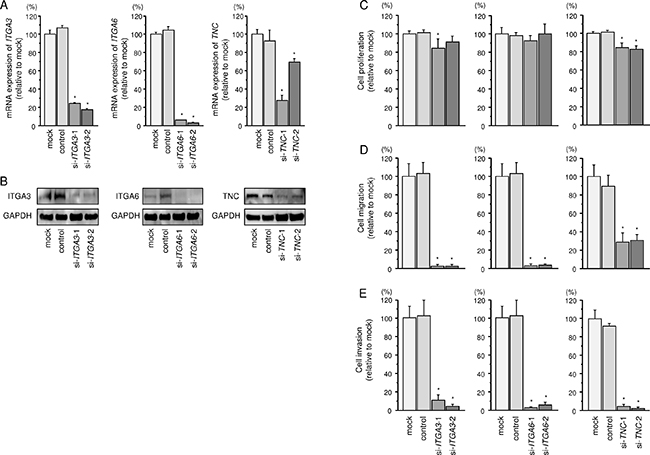 Clinical significance of ITGA3, ITGA6, and TNC expression in HNSCC 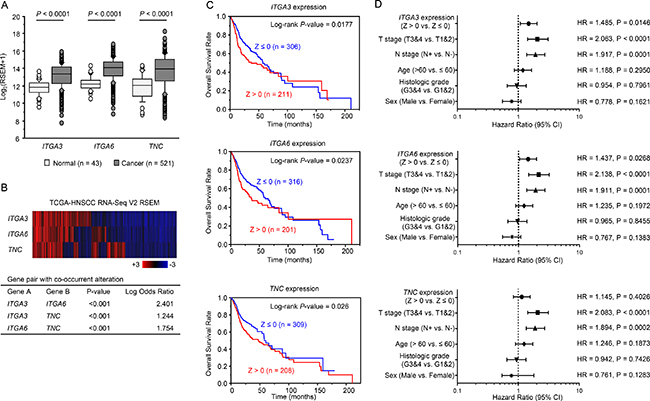 Next, to examine whether the expression levels of these genes predicted overall survival, patients were divided into two groups: Z-score > 0 and Z-score ≤ 0. Higher ITGA3, ITGA6, and TNC expression levels were associated with shorter overall survival (P = 0.0177, P = 0.0237, P = 0.026, respectively; Figure 6C). Details of mRNA expression z-scores are described in Figure 7A. The distributions of ITGA3, ITGA6, and TNC genomic copy number variations are shown in Figure 7B and 7C. 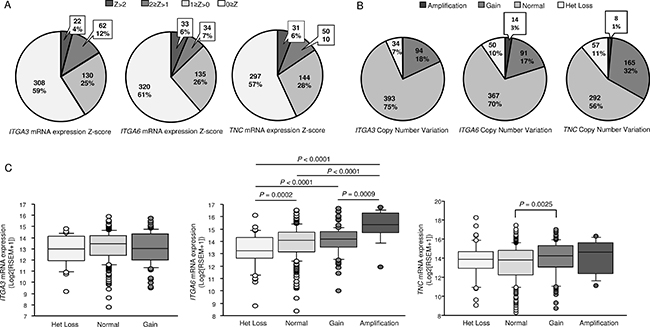 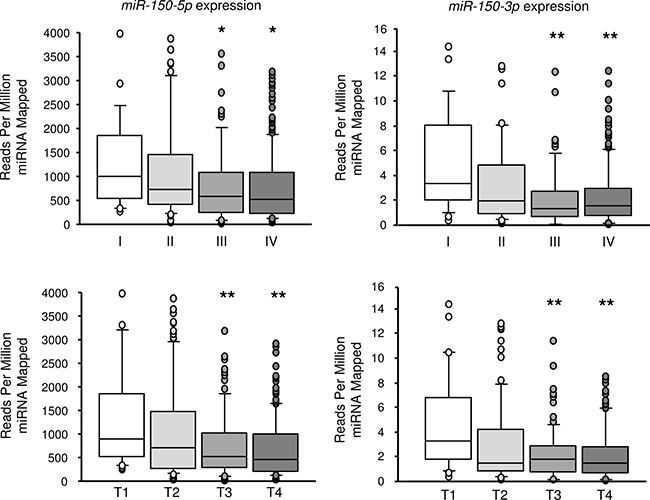 Our signature included several antitumor miRNAs (miR-375, miR-133a, and miR-1 etc.) that had been identified in human cancers in previous studies [32–40], suggesting that our present signature was effective for identification of novel oncogenic and antitumor miRNAs in HNSCC cells and may provide a benchmark for future studies of HNSCC. Interestingly, our present signature revealed that both strands of pre-miR-150, i.e., miR-150-5p and miR-150-3p were significantly downregulated in this signature. Our recent studies demonstrated that both strands of pre-miR-144 (miR-144-5p: guide strand and miR-144-3p: passenger strand) and pre-miR-145 (miR-145-5p: guide strand and miR-145-3p: passenger strand) inhibited cancer cell aggressiveness [41–43]. These findings suggested that passenger strand of miRNAs had antitumor function in several cancer cells. Therefore, we focused on miR-150-5p and miR-150-3p and investigated the antitumor functional of these miRNAs in HNSCC cells.

Our present data demonstrated that both miR-150-5p and miR-150-3p were significantly reduced in cancer tissues, and ectopic expression of each miRNA markedly inhibited cancer cell aggressiveness. These data indicated that both strands of miR-150-5p and miR-150-3p functioned as antitumor miRNAs in HNSCC cells. Past studies have reported the aberrant expression of miR-150-5p in various cancers, suggesting that this miRNA contributes significantly to cancer pathogenesis [44]. However, the expression status of miR-150-5p was varied according to cancer type, indicating that miR-150-5p was a multifunction molecule with both oncogenic and antitumor functions depending on the cancer type [44]. In contrast, the functional significance of miR-150-3p in human cancer is still unclear. Our present study is the first report demonstrating that miR-150-3p acts as an antitumor miRNA, similar to miR-150-5p, in HNSCC cells.

We also evaluated the roles of miR-150-5p and miR-150-3p in regulating genes and pathways in HNSCC cells. We hypothesised that miR-150-5p and miR-150-3p may coordinately regulate target genes associated with HNSCC pathogenesis. To identify miRNA-regulated targets and pathways, we applied in silico and gene expression analyses, as described in our previous studies [13–17, 41]. Here, we identified 5 putative candidate genes involved in the focal adhesion pathway (TNC, ITGA3, ITGA6, CAV2, and XIAP) that were regulated by both miR-150-5p and miR-150-3p in HNSCC cells. Among these genes, our previous studies demonstrated that ITGA3, ITGA6, and CAV2 were overexpressed in cancer tissues and associated with cancer cell migration and invasion [22, 26, 28]. Moreover, ITGA3, ITGA6, and CAV2 have been shown to be directly regulated by antitumor miRNAs, i.e., miR-223, miR-29s, and miR-218, respectively [22, 26, 28]. In this study, we focused on TNC and investigated its functional roles in HNSCC.

TNC is a multifunctional extracellular matrix (ECM) glycoprotein composed of several distinct domains [45]. Expression of TNC in adult tissue is restricted, except in the context of inflammation and tissue injury [45]. Cancer cells and corresponding stromal cells also exhibit TNC expression, and high expression of TNC has been reported in several cancers [45–47]. Overexpression of TNC induces ECM deposition, and aberrant activation of ECM-mediated signalling promotes cancer cell aggressiveness, and the epithelial-mesenchymal transition (EMT) [45–47]. Several studies have demonstrated that TNC binds directly to integrins, and TNC/integrin-mediated signalling contributes to embryonic development, tissue repair, and cancer pathogenesis [46, 48]. Our previous studies showed that overexpression of ITGA6/B4 and ITGA3/B1 was involved in cancer cell migration and invasion in HNSCC and prostate cancer [22, 26]. Moreover, a recent study showed that ITGA6 is a hypoxia-inducible factor (HIF)-dependent transcriptional target gene and that ITGA6 expression is an independent prognostic factor in patients with breast cancer [49].

Our large cohort study using TCGA datasets indicated that the expression levels of ITGA3, ITGA6, and TNC were upregulated in cancer tissues. Furthermore, Kaplan–Meier survival curves revealed that high expression of these genes predicted poorer survival in patients with HNSCC. Our functional study showed that silencing of ITGA3, ITGA6, and TNC inhibited HNSCC cell migration and invasion. Metastasis is responsible for most of the mortality in patients with HNSCC. Therefore, activation of TNC/integrin receptor-mediated signalling may be a putative target in cancer treatment.

A total of 22 clinical tissue specimens were collected from patients with HNSCC who underwent surgical resection at Chiba University Hospital between 2008 and 2014. Clinicopathological features of patients with HNSCC are summarised in Table 1. All patients in this study provided informed consent, and the study protocol was approved by the Institutional Review Board of Chiba University.

To obtain the miRNA expression signature, we carried out high-throughput deep sequencing using Genome Analyzer IIx (Illumina, CA, USA) with 6 pairs of tumor and normal samples (Table 1). The procedures of small RNA sequencing and data mining were performed as described in our previous studies [16].

SAS cells were transfected with 10nM miRNA by Reverse transfection. After 48h, immunoprecipitation was performed using a microRNA isolation kit, Human Ago2 (Wako, Osaka, Japan) according to the manufacturer’s protocol. Expression levels of miR-150-5p or miR-150-3p were measured by RT-qPCR methods. Detection of miRNA data were normalized to the expression of miR-26a (assay ID: 000404; Applied Biosystems), which was not affected by miR-150-5p and miR-150-3p.

The clinical significance of ITGA3, ITGA6, and TNC in HNSCC was assessed by RNA sequencing and by using a putative copy number variation (CNV) database (predicted by the GISTIC algorithm) in HNSCC-TCGA (http://cancergenome.nih.gov). The genomic and clinical data were retrieved from cBioportal (http://www.cbioportal.org/) [51] or UCSC Cancer Browser (https://genome-cancer.ucsc.edu/proj/site/hgHeatmap/) [52], which were downloaded on June 17, 2016. Specimens with alterations in ITGA3, ITGA6, and TNC and specimens without alterations were analysed by Kaplan–Meier survival curves and log-rank statistics. Heatmap of gene expression was generated by cBioportal. The P-values and log odds ratio of co-occurrence are determined by Fisher’s exact test. Detail information on the method is described in previous paper [51].

Relationships between expression values in 2 conditions or variables were analysed using the Mann-Whitney U test or Bonferroni-adjusted Mann-Whitney U test. Spearman’s rank test was used to evaluate the correlations between the expression of miR-150-5p or miR-150-3p and target genes. We used Expert StatView software (version 5.0 SAS Institute Inc., Cary, NC, USA) for these analyses.

48. Tucker RP, Chiquet-Ehrismann R. Tenascin-C: Its functions as an integrin ligand. The international journal of biochemistry and cell biology. 2015; 65:165–168.