1Department of Obstetrics and Gynecology, Faculty of Medicine, The University of Tokyo, Tokyo 113-8655, Japan

3Department of Pathology, Faculty of Medicine, The University of Tokyo, Tokyo 113-8655, Japan

Endometrial cancer is one of the most common gynecological malignancies, the incidence of which is increasing worldwide. This increase is ascribed to the rising prevalence of obesity and nulliparity [1]. Although the prognosis of low-risk endometrial cancer is generally favorable, chemotherapeutic options for high-risk patients are limited, and there are no approved molecular therapies thus far; therefore, the development of novel therapeutic strategies is necessary to improve the prognosis.

Chromosomes within eukaryotic nuclei combine with structural proteins such as histones to form chromatin. Four major histones (H2A, H2B, H3, and H4) form an octamer comprising two copies of each histone type, around which DNA is wound to form regular, repeating units known as nucleosomes [2]. These nuclear histones undergo various chemical modifications such as acetylation, methylation, ubiquitination, sumoylation, poly ADP-ribosylation, and phosphorylation [3]. Among these modifications, dynamic upregulation or downregulation of histone methylation is required for epigenetic modification of gene expression. Many types of histone methyltransferases and demethylases have been identified to have critical roles in methylation. A large body of evidence has indicated that dysregulation of histone methylation is involved in the development and progression of cancer. Several histone methyltransferases and demethylases have been reported to be overexpressed in various types of cancers [4–6]. For example, we reported that the histone methyltransferase SUV39H2 induced cell proliferation and chemo- and radio-resistance in lung cancer cells [7]. Enzymes relevant to histone methylation and involved in human tumorigenesis have recently attracted attention for anti-cancer drug development [6].

Enhancer of zeste homolog 2 (EZH2) is a histone methyltransferase that methylates lysine 27 of histone H3 to promote transcription silencing [8, 9]. EZH2 is the enzymatically active core subunit of the PRC2 complex, which also includes EED, SUZ12, RbAp46, and RbAp48 [10]. EZH2 has been reported to be overexpressed in many types of cancer, and high levels of EZH2 are associated with tumor aggressiveness [11, 12]. Increased EZH2 activity is known to induce H3K27 trimethylation and act as an oncogene by repressing tumor suppressor genes [13]. Accumulating evidence demonstrates the potential of EZH2 expression for the development of anti-cancer therapeutics. Several groups have reported compounds that directly and selectively inhibit EZH2 activity [14–16]. GSK126, an EZH2 inhibitor, markedly suppresses the growth of several types of cancer, including B-cell lymphoma [17].

EZH2 is overexpressed in endometrial cancer cell lines and tissues 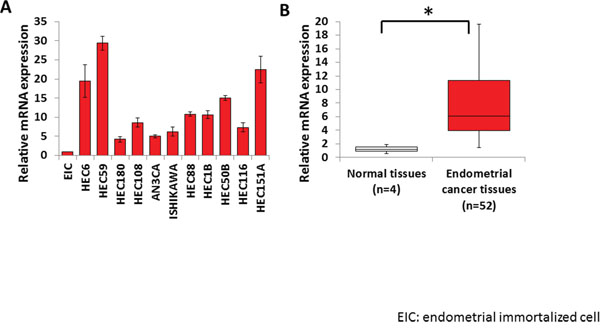 EZH2 is an independent prognostic factor in endometrial cancer

Figure 2: EZH2 expression and patient survival. The role of EZH2 mRNA expression in endometrial cancer was identified by RNA sequencing of 540 cases from the TCGA database. The median of EZH2 expression level was used as the threshold. Progression-free survival (PFS) (A) and overall survival (OS) (B) were analyzed by the Kaplan-Meier method and log-rank test. 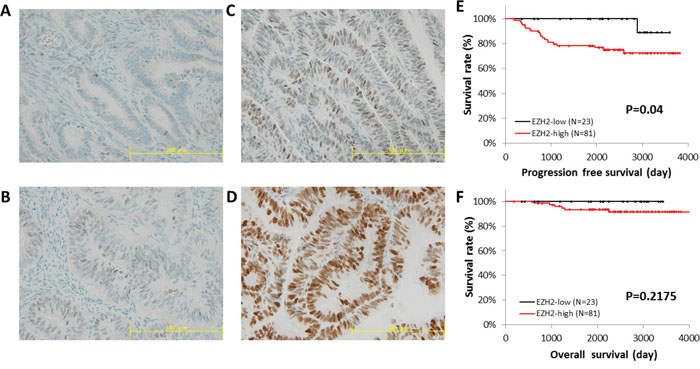 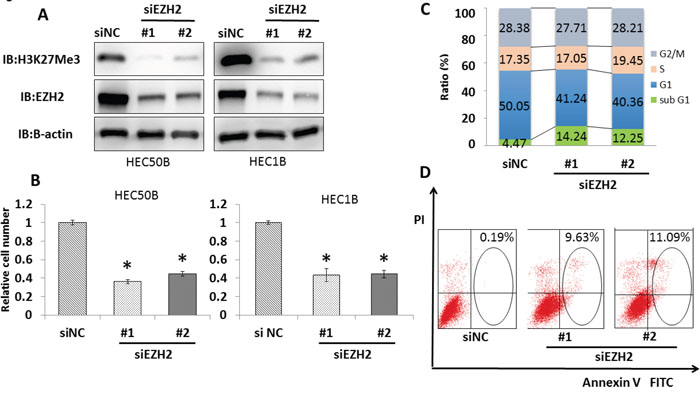 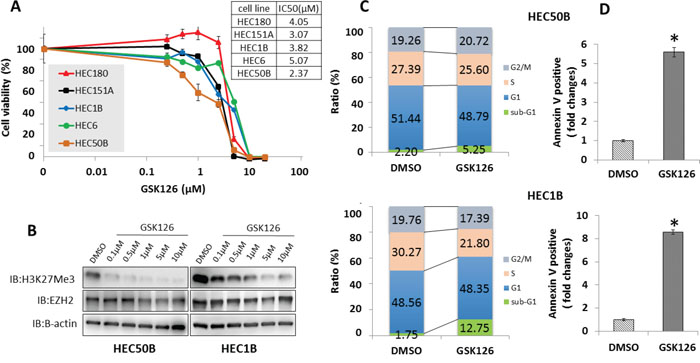 EZH2 has been shown to be frequently overexpressed in various types of tumors, and a higher level of EZH2 might be associated with poor prognosis [22]. Dysregulation of EZH2-catalyzed H3K27 trimethylation is frequently observed in many types of cancers. Our study suggests that high EZH2 expression is a significant prognostic factor in endometrial cancer, according to the TCGA and TMA data. These results are congruent with other findings from immunohistochemical experiments [18, 19]. In addition, we showed via quantitative real-time PCR that EZH2 is significantly overexpressed in 11 endometrial cancer cell lines and clinical samples compared with that in normal samples. The oncogenic function of EZH2-catalyzed methylation is known to rely on transcriptional silencing of tumor-associated genes. Additional findings to support an oncogenic role for EZH2 have recently emerged; recurrent mutations of the tyrosine 641 (Y641) and alanine 677 (A677) residues of EZH2 have been reported in B-cell lymphomas [23, 24]. Although the Y641 mutant was initially reported to be a loss-of-function mutation [25], subsequent biochemical analyses indicated that this mutant actually caused increased activity of EZH2 [23, 26]. Similar to the Y641 mutant, the A677 mutation led to aberrantly elevated H3K27 trimethylation [24]. These findings indicate that the role of EZH2 in human tumorigenesis primarily involves dysregulation of H3K27 trimethylation. In this study, EZH2 knockdown decreased cell proliferation and induced apoptosis by decreasing the H3K27 me3 level in endometrial cancer cell lines. Moreover, GSK126 treatment decreased endometrial cancer cell growth and increased apoptotic cell death by attenuating H3K27 trimethylation. Previous studies have shown that EZH2 knockdown decreases proliferation in endometrial cancer cells [20, 21]. In addition, apoptotic effects of EZH2 inhibition have been reported in other cancers, including lung cancer [27]. However, this is the first report of the effectiveness of EZH2 inhibition in endometrial cancer.

Randomized trials have reported that doxorubicin and cisplatin chemotherapy improves the PFS and OS of advanced endometrial cancer [31, 32]. These results indicate that combined administration of a small-molecule EZH2 inhibitor such as GSK126 with conventional chemotherapy could be a new strategy for effective treatment of endometrial cancer. Several in vivo studies evaluating the use of GSK126 against various types of cancer cells in xenograft mouse models suggest its efficacy and feasibility [30, 33, 34]. In addition, a phase I clinical trial of GSK126 for patients with relapsed-refractory, diffuse large B-cell lymphoma and transformed follicular lymphoma has already started in the United States (ClinicalTrials.gov identifier: NCT02082977). The clinical significance of EZH2 inhibitors such as GSK126 in the treatment of various types of cancer, including endometrial cancer, should be explored further in future studies.

This study has some limitations. First, biomarkers for sensitivity to GSK126 in endometrial cancer cells have not yet been identified. Second, an experiment using a xenograft model is required to clarify the anti-tumor effect of GSK126 against endometrial cancer. Third, although the established function of EZH2 in tumorigenesis is known to require H3K27 trimethylation with transcriptional silencing of tumor-associated genes, several recent studies have shown some non-established functions of EZH2. For example, EZH2 was shown to methylate and competitively inhibit the ubiquitination of H2BK120, which is a lysine residue, in cancer cells [36]. In this regard, we did not perform a functional analysis to determine the other roles of EZH2 in endometrial cancer. Further studies relevant to the non-established roles of EZH2 in endometrial cancer are warranted.

EZH2 gene expression in endometrial cancer was investigated by Kaplan–Meier analysis of RNA sequencing data downloaded from The Cancer Genome Atlas (TCGA; https://tcga-data.nci.nih.gov/) [37] on May 9, 2016. EZH2 expression was normalized using RNA-Seq by Expectation Maximization [38]. The 540 clinical endometrial cancer samples available were classified into two groups—EZH2-high and EZH2-low—on the basis of the median of EZH2 expression as a threshold.

In total, 104 clinical endometrial cancer specimens were obtained from the University of Tokyo Hospital (Supplementary Table 3). Written informed consent was obtained from the patients. The Human Genome, Gene Analysis Research Ethics Committee of the University of Tokyo approved the study design. All of the patients showed endometrioid histology. Formalin-fixed, paraffin-embedded primary endometrial cancer specimens were cut into 4-μm-thick sections for tissue microarray (TMA).

Immunohistochemical analysis was performed using an anti-EZH2 antibody (Cell Signaling Technology, 5246). EZH2 expression intensity was graded from 0 to 3. The results were scored independently by two observers, and the average score was recorded as the final expression score for evaluation.

Cells (2×105/well) were seeded in 6-well plates. After 24 h of incubation, the medium was replaced with fresh medium containing GSK126 or the siRNAs and incubated for 24–72 h. Cells were collected using trypsin and washed twice with phosphate-buffered saline (PBS). Collected cells were re-suspended in 1× binding buffer and stained with fluorescein isothiocyanate-conjugated (FITC) Annexin V/PI (Annexin V-FITC Apoptosis Detection kit II; BD Bioscience) in the dark at room temperature for 15 min. Annexin V-FITC/PI double-positive cells were detected by flow cytometry and expressed as a percentage of apoptotic cells.

Cells (1 × 103/well) were seeded in 6-well plates. After 24 h of incubation, the medium was replaced with fresh medium containing various concentrations of GSK126 or DMSO, followed by 9 days of incubation. The medium and GSK126 were replaced every 3 days. The cells were fixed with 100% methanol for 2 h and stained with Giemsa (Wako, Osaka, Japan). Colonies having more than 100 cells were counted and normalized to the number of colonies observed after treatment with 0.2% DMSO [41].

The authors have no competing interests to disclose.

This work was financially supported by a Grant-in-Aid for Scientific Research (C) (grant number 26462515 to K. Oda, and 15K10705 to KN); Grants-in-Aid for Young Scientists (B) (15K20128 to K. Sone, 16K21330 to AM, and 16K20176 to MM-U); and a Grant-in-Aid for Research Activity Start-up (15H06173 to T. Kashiyama) from the Ministry of Education, Culture, Sports, Science and Technology of Japan. This research was also supported by the Project for Cancer Research and Therapeutic Evolution (P-CREATE) from the Japan Agency for Medical Research and Development, AMED (to K.Oda).

38. Li B, Dewey CN. RSEM: accurate transcript quantification from RNA-Seq data with or without a reference genome. BMC Bioinformatics. 2011; 12:323.