Cancer is a major public health problem worldwide, with an estimated 14.1 million new cancer cases and 8.2 million deaths in 2012 [1]. Carcinogenesis is a complex process, influenced by various genetic and environmental factors, such as smoking, poor diet, physical inactivity, reproductive changes and the growth and aging of the population [1, 2]. Telomeres, composed of the TTAGGG repeat sequence, are special chromatin structures located at each end of a chromosome. Telomeres maintain chromosomal integrity by protecting chromosome ends from DNA damage and end-to-end fusions [3]. Abnormally short telomeres may cause chromosomal instability, and consequentially contribute to cancer development. Telomerase (also known as terminal transferase), a reverse transcriptase enzyme, extends the 3′ end of chromosomal DNA by catalyzing the telomere synthesis reaction. Defects in telomerase activity have been observed in many human tumor cells, and telomere length was inversely associated with cancer incidence and mortality [4]. Telomerase reverse transcriptase (TERT), the telomerase catalytic subunit, maintains telomere stability [5]. In a previous genome-wide association study (GWAS), Shete, et al. discovered that certain TERT gene variants increase glioma susceptibility [6]. Since then, TERT variants have been associated with various cancers, including breast, lung, colorectal, ovarian, prostate, and gastric cancers [7, 8].

The TERT gene is located in 5p15.33. The rs2736100 T > G polymorphism in the second intron of the TERT gene has been associated with shortened telomere length in gastric cancer [9]. The association of this SNP with cancer susceptibility has been extensively explored, although the findings are as yet inconclusive. Several meta-analyses published in 2014 associated the TERT rs2736100 polymorphism with increased glioma and lung cancer susceptibility [10-14]. In 2012, Zou, et al. observed an association between this polymorphism and overall cancer risk [15], although their meta-analysis involved only 11 articles. However, between 2015 and 2016, more than 27 studies were published with large sample sizes [9, 16-37]. Thus, we performed an updated meta-analysis to more precisely assess the TERT rs2736100 polymorphism-cancer association, including 72 studies derived from 61 articles with 269,720 total subjects [6, 9, 16-74].

We initially identified 432 records from the PubMed and EMBASE databases (Figure 1). After screening titles and abstracts, 268 articles were excluded and the full texts of the remaining 164 articles were further assessed. Articles were excluded for the following reasons: irrelevant association (87 articles), meta-analysis (7), and lacking sufficient raw data for further evaluation (12). Three additional articles were identified by manually screening the references of relevant articles. Finally, 72 studies extracted from 61 articles met our study inclusion criteria and were included in the current meta-analysis [6, 9, 16-74]. 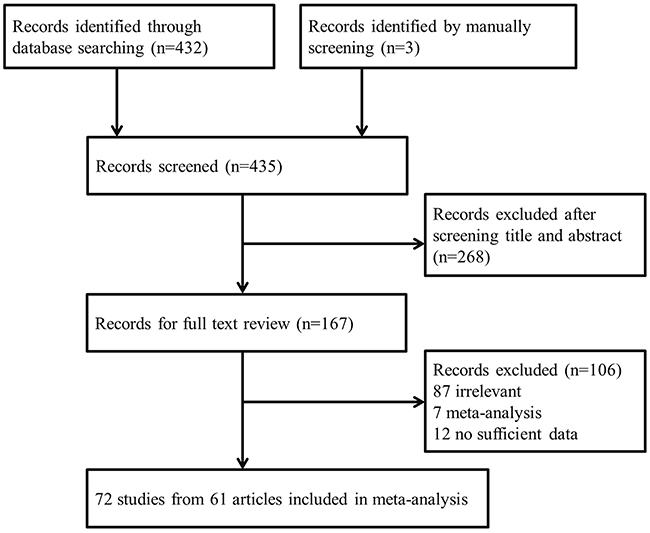 Figure 1: Flowchart of articles included in our meta-analysis.

In most of the included studies, the TERT rs2736100 polymorphism genotypic distribution followed Hardy-Weinberg equilibrium (HWE) in controls, except for seven studies [6, 28, 43, 51, 63, 66, 72]. Since the genotype distributions of other polymorphisms were in compliance with HWE in these seven studies, we included these studies in the meta-analysis. In total, 72 studies with 108,248 cases and 161,472 controls were included in our pooled analysis. Studies were conducted on various cancer types, including lung (28 studies), glioma (5), colorectal (4), bladder (4), myeloproliferative neoplasms (MPN) (4), gastric (3), acute myeloid leukemia (AML) (2), breast (2), melanoma (2), and thyroid (2). The remaining 16 studies focused on different types of cancer, with one study for each type of cancer, and were grouped together as “other cancer” in our analyses. There were 37 studies conducted in Asians and 35 in Caucasians. Twenty-three studies included fewer than 500 controls, and 49 had 500 or more controls. Sixteen studies were categorized as low quality and 56 were high quality. The main characteristics of all the studies are summarized in Table 1.

Table 1: The main characteristics of all the studies included in the meta-analysis

a: Number of cases and controls for TG and GG genotypers. b: The allele frequence in the three studies was provided to estimate the association under allele contrast model (G vs. T). 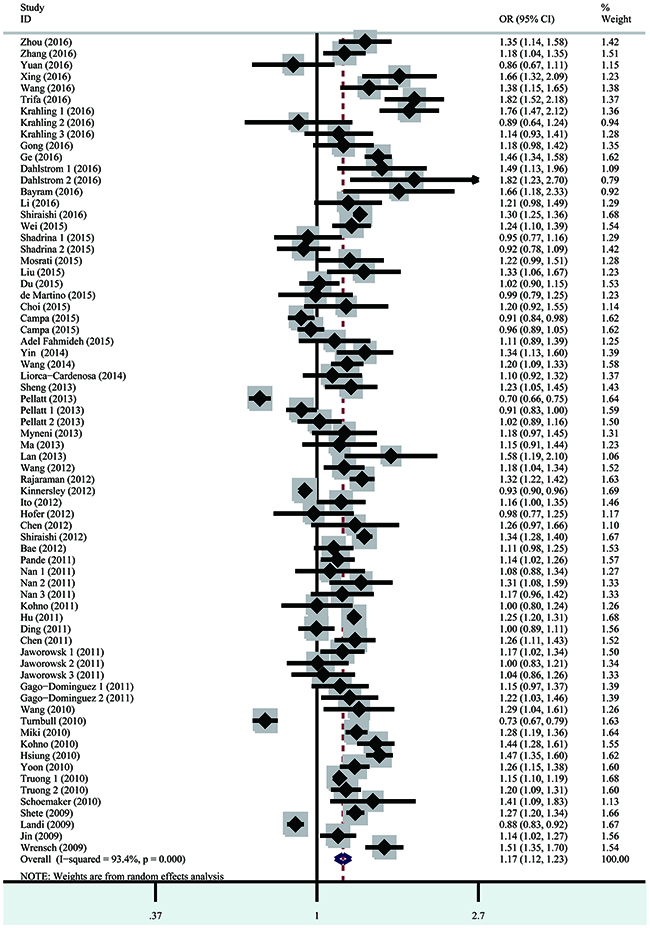 Figure 2: Forest plot of the association between the TERT rs2736100 polymorphism and overall cancer susceptibility in the allele contrast model. 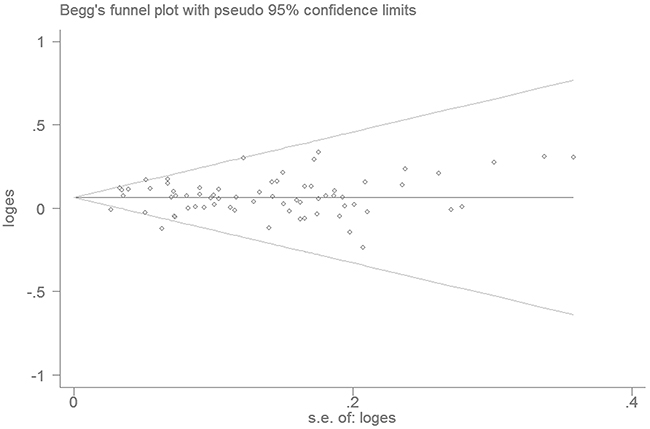 We calculated FPRP values for associations between the TERT rs2736100 T>G polymorphism and overall cancer risk using the five genetic models. FPRP values were all <0.20, suggesting that these associations were noteworthy (Table 3).

Telomeres are special structures at the ends of eukaryotic chromosomes, and are responsible for protecting chromosomes from degradation, end-to-end fusion, and rearrangement [10]. Telomerase maintains proper telomere length by adding repetitive telomeric sequences to the 3’ ends of telomeres. Abnormal telomerase activity is implicated in the initiation and development of cancer and other age-associated diseases [75]. The TERT subunit of telomerase consists of three highly conserved domains: the RNA-binding domain (TRBD), the reverse transcriptase domain, and a carboxy-putative extension (CTE) proposed to constitute the putative thumb domain [75]. TERT is overexpressed in many human cancers [76]. The TERT rs2736100 polymorphism, localized in the second intron of the TERT gene, has been wildly studied with respect to cancer risk [7, 8]. However, the functional significance of the TERT rs2736100 polymorphism was not clear. Preliminary studies in gastric cancer suggested that this SNP is associated with decreased telomere length [9].

The current meta-analysis had several limitations. First, there were substantial heterogeneities in the pooled study investigating the association between the TERT rs2736100 polymorphism and overall cancer risk. We reduced the degree of heterogeneity through stratified analyses by cancer type, patient ethnicity, sample size, and study quality score. Some cross-study heterogeneity might be attributed to differences among ethnic groups [78]. However, other sources of heterogeneity were not identified, such as control sources and genotyping methods. Second, the studies in this meta-analysis focused on Asian and Caucasian populations only, so we may not have had sufficient statistical power to evaluate associations based on ethnicity. Third, our results were based on unadjusted ORs due to the unavailability of confounding factor information for cases and controls (e.g., age, sex, smoking status, drinking status, and environmental exposure). Finally, lacking the original data from eligible studies limited our ability to explore gene-environment interactions.

A comprehensive literature search of the PubMed and EMBASE databases was performed up to November 1, 2016. To find all eligible case-control studies that assessed the association between the TERT rs2736100 polymorphism and cancer risk, we used the following keywords: “TERT or telomerase reverse transcriptase”, “polymorphism or variant”, and “cancer or tumor or neoplasm or carcinoma”. We also evaluated additional studies by manually screening the references of both primary articles and reviews.

Eligible studies included in our analysis met the following criteria: (i) the TERT rs2736100 polymorphism-cancer risk association was assessed; (ii) case-control studies or cohort studies; (iii) sufficient data to calculate an OR with 95% CI; (iv) studies in English. Exclusion criteria were as follows: (i) case only studies; (ii) overlapping publications; (iii) abstract, case report, editorial comment, and review. Studies that deviated from HWE in controls were excluded, unless further evidence showed that another polymorphism was in HWE.

Two investigators independently extracted available data from each eligible study. The following information was collected: first author’s surname, year of publication, country of origin, patient ethnicity, cancer type, numbers of cases and controls, genotype counts of cases and controls, results of the HWE test, and quality scores (low quality studies with score ≤9, high quality studies with score >9) [79]. Any disagreements were solved by discussion until a consensus was reached between the two investigators. If no consensus was reached, another investigator joined the discussion, and a final decision was made by a majority.

FPRP values were applied to assess the statistical power of our significant findings [80, 81]. An FPRP value of 0.20 was set as the criterion for noteworthiness. A prior probability of 0.1 was assigned to detect an OR of 0.67/1.50 (protective/risk effects) for an association with genotypes under investigation.

HWE in control subjects was assessed by chi-squared test. The strength of association between the TERT rs2736100 polymorphism and cancer risk was estimated by calculating crude ORs and their 95% CIs using all five genetic models: homozygous (GG vs. TT), heterozygous (TG vs. TT), dominant (GG vs. TG + TT), and recessive (TG + GG vs. TT), as well as the allele contrast model (G vs. T). Q-test was used to quantify heterogeneity among all eligible studies, and P>0.10 suggested a lack of heterogeneity among studies. Generally, the fixed effects model (Mantel–Haenszel method) or the random effects model (DerSimonian–Laird method) was employed in the absence (P≥0.10) or presence (P<0.10) of heterogeneity, respectively [82-84]. Heterogeneity was also estimated using the I2 test [85]. Subgroup analyses were conducted by patient ethnicity, cancer type, and study sample size. The Begg’s funnel plot and the Egger’s linear regression test were used to evaluate publication bias [86]. All statistical analyses were performed using STATA version 12.0 software (STATA Corporation, College Station, TX). All statistical analyses were two-sided. P<0.05 was considered statistically significant.