Alzheimer’s disease (AD) was a kind of diseases occurred in middle and old age [1], and was associated with some neurological symptoms and cognitive problems, including memory impairment, leading by neurodegeneration or synapse loss leading to and other cognitive problems [2]. Currently, there were a total of 6 million AD patients in China [3]. Clinically, late-onset AD (LOAD) is more common type of AD and the heritability for susceptibility to LOAD was predicted nearly 80% [4]. The etiology and pathogenesis for LOAD were still not clear, and study indicated that LOAD was influenced by interactions between genetic factors and environmental factors [5, 6]. So it is necessary to find and validate biomarkers for AD prevention, especially for LOAD.

Inflammation plays a main role in AD pathogenesis, and the inflammation irritants including damaged tissues and β-amyloid plaque [7]. Interleukin-16 (IL-16) is one type of gene, encoded pro- inflammatory cytokines [8]. Studies [9] indicated that IL-16 levels increased in AD patients, conﬁrming that IL-16 may play an important role in the progression of AD [9]. The human IL-16 gene could encode pleiotropic cytokine, which was a modulator of T cell activation [10]. However, to date, just two previous studies [11- 12] were conducted on the association between IL-16 gene single nucleotide polymorphisms (SNPs) and AD risk, but just one study focused on the correlation of rs4072111, rs1131445 polymorphisms and LOAD risk [11]. There was growing evidence demonstrating the association of adiponectin (ANP) gene SNPs with circulating adiponectin levels. rs266729and rs1501299 were two common SNPs. Some studies [13, 14] have reported the association between ANP gene polymorphisms and some metabolic diseases, such as insulin resistance and type 2 diabetes, but just one study [15] have focused on the association between ANP gene polymorphisms and LOAD.

In consideration of the limited number of study on association between ANP and IL- 16 gene and LOAD, in this study, we aimed to investigate the impact of ANP and IL- 16 gene SNPs, additional gene- gene interaction and haplotype combination on LOAD risk.

This is a case-control study. Participants are consecutively recruited between January 2009 and November 2014 from the Second Affiliated Hospital of Zhengzhou University. Clinical diagnosis of probable AD was made according to the revised criteria of National Institute of Neurological and Communicative Disorders and Stroke/ Alzheimer’s Disease and Related Disorders Association (NINCDS/ ADRDA) [16], participants with advanced, severe, progressive, or unstable infectious, metabolic, immunologic, endocrinological, hepatic, hematological, pulmonary, cardiovascular, gastrointestinal, and/or urological diseases are excluded (Figure 1). At last, a total of 430 LOAD patients are included in the study, controls are those who are free of AD and matched by sex, age and ethnic background, and control participants with family history of AD are excluded. The selection and exclusion details could be found in our previous study [17]. 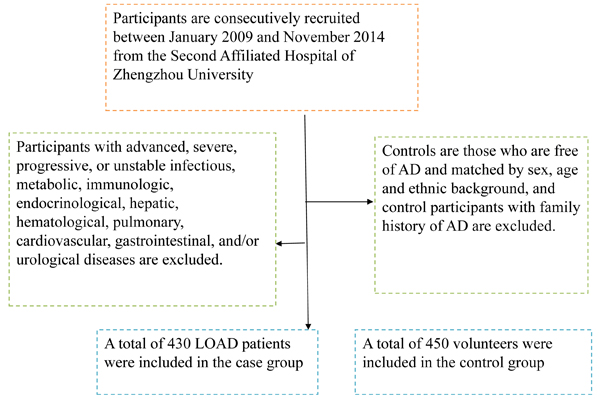 SNPs within the ANP and IL-16 gene are selected according to the following methods: 1) SNPs, which have been reported associations with AD and were not been well studied; 2) SNPs, the minor allele frequency (MAF) of which were more than 5%. At last, two SNPs of ANP gene and two SNPs of IL- 16 gene are selected for genotyping in the study: rs266729, rs4072111, rs1501299 and rs1131445. Genomic DNA is extracted from EDTA-treated whole blood, using the DNA Blood Mini Kit (Qiagen, Hilden, Germany) according to the manufacturer’s instructions. Genotyping of these SNPs were performed using polymerase chain reaction and restriction fragment length polymorphism (PCR-RFLP) analysis. PCR primer sequences for each polymorphism are shown in Table 1. The PCR reactions were carried out in a final volume of 25 μl containing: 10 × PCR buffer, 4.5 mMMgCl2 (Roche, Germany), 0.4 mM of each dNTP (Fermentas, Germany), 10 pmol of each primer, 30 ng template DNA, 1 U Taq DNA polymerase (Roche, Germany) and sterile distilled water up to 25 μl. Ampliﬁcation conditions started with an initial denaturation step of 5 min at 94 °C, followed by 35 cycles of 40 s denaturation (94 °C), 30 s annealing (56 °C) and 40 s extension (72 °C), ended by a ﬁnal extension for 5min (72 °C).

The means and standard deviations were calculated for normally distributed continuous variables, and percentages were calculated for categorical variables. The categorical data were analyzed using χ2 test, and continuous variables were analyzed using Student’s t test. Hardy-Weinberg equilibrium (HWE), haplotype analysis and pairwise linkage disequilibrium (LD) analysis were investigated by using SNPStats (available online at http://bioinfo.iconcologia.net/SNPstats). Logistic regression was performed to investigate association between SNP and LOAD by dominant and co- dominant models. All reported P-values were two-tailed, and those less than 0.05 were considered statistically signiﬁcant.

Generalized multifactor dimensionality reduction (GMDR) [18] was used to analysis the interaction among 4 SNPs, cross-validation consistency, the testing balanced accuracy, and the sign test, to assess each selected interaction were calculated. Permutation testing is also conducted to gain empirical P values of prediction accuracy as a benchmark based on 10,000 shuffles. The cross-validation consistency score is a measure of the degree of consistency with which the selected interaction is identiﬁed as the best model among all possibilities considered. Testing-balanced accuracy is a measure of the degree to which the interaction accurately predicts case-control status, and yields a score between 0.50 (indicating that the model predicts no better than chance) and 1.00 (indicating perfect prediction). Finally, the sign test, or permutation test (providing empirical P-values), for prediction accuracy can be used to measure the significance of an identiﬁed model.

A total of 880 participants (514 males, 366 females) were selected, including 430 LOAD patients and 450 control subjects. The mean age of all participants was 81.7 ± 15.9 years old. The cases have the higher alcohol- drinking rate than controls. The means of FPG and TG were significantly higher in cases and controls, but the mean of HDL was lower in cases and controls. The mean of ANP concentrations was higher in controls than that in cases (Table 2).

Table 3: Genotype and allele frequencies of 4 SNPs between case and control group 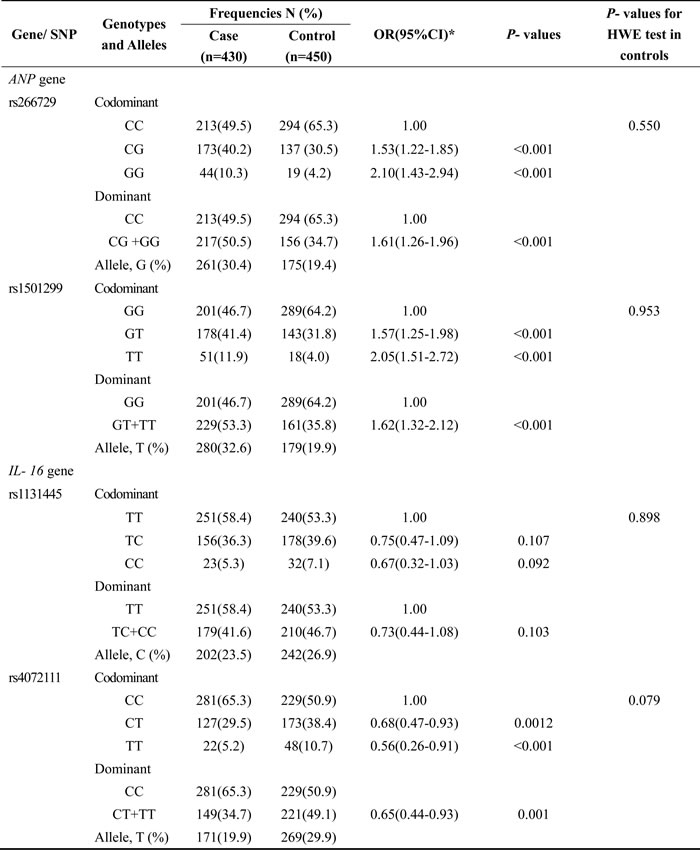 Those P- values less than 0.05 were considered statistically signiﬁcant.

Table 7: Haplotype analysis on association between IL- 16 and LOAD risk

In recent two studies [11, 12], IL- 16 gene was associated with LOAD risk. Khoshbakht et al [12] suggested that rs11556218 and rs4778889 polymorphisms within IL- 16 gene have a protective role in the development of sporadic AD in Iranian population. In the other study conducted by Anvar et al [11] suggested that the rs4072111 variation was associated with increased AD susceptibility in an Iranian population. Rosa et al [9] confirmed that IL-16 proteins may play an important role in progression of neurodegenerative disorders. Regarding to the relationship between rs4072111, rs1131445 and LOAD, the current study was the second study that concluded a positive association between the IL16- rs4072111 polymorphism and LOAD risk. However several studies [25- 27] have reported the association between IL- 16 gene polymorphism and risk of coronary heart disease (CHD) risk in different population. This relation many be another underlying mechanism for LOAD risk reduction by IL- 16 polymorphism, because CHD was also associated with AD risk factors, including obesity, metabolic syndrome, and insulin resistance.

In this study, LOAD risk is influenced by both ANP and IL- 16 gene, so it is interesting to investigate the impact of gene- gene interaction between the two genes on LOAD risk. In this study, GMDR model was used for interaction detection, because there were no dimensional constraints in this model. We found a significant gene- gene interaction between rs266729 and rs4072111. To our knowledge this is the first study for investigating impact of interaction between ANP and IL- 16 gene on LOAD risk in Chinese population. Previously, just two studies [17, 28] focused on the impact of gene- gene interaction on AD risk, which was conducted between APOE and PPAR -γ gene for Spain population and CYP2J2 and PPAR -γ gene for Chinese Han population. The results of this study suggest that ANP genetic variants may modify the influence of IL- 16 gene on AD risk. The underlying mechanisms for this interaction may due to that both SNP were associated with AD risk factors. We also conducted haplotype analysis in ANP gene and IL- 16 gene respectively. We found that haplotype containing the rs266729- G and rs1501299- T alleles in ANP gene were associated with a statistically increased LOAD risk, and haplotype containing the rs1131445- C and rs4072111- T alleles in IL- 16 gene were associated with a statistically decreased LOAD risk

The current study also has some limitations. Firstly, limited number of SNP in ANP and IL- 16 gene are included in current study, and in the future, more SNPs should be included in analysis. Secondly, gene- environment interaction should be investigated in the future studies, such as lifestyle, diet factors and so on. Thirdly, more detailed analysis should be conducted in other populations, for example, the gender and race difference of this relationship.

The writing of this paper is supported by the Second Affiliated Hospital of Zhengzhou University and PLA 148 Hospital. We thank all the partners and staffs who help us in the process of this study.