2University of the Chinese Academy of Sciences, Beijing, China

L-Arginine itself and its metabolite-nitric oxide play great roles in intestinal physiology. However, the molecular mechanism underlying nitric oxide pathway regulating L-Arginine transport and cell growth is not yet fully understood. We report that inhibition of nitric oxide synthase (NOS) significantly induced cell apoptosis (p < 0.05), and promoted the rate of Arginine uptake and the expressions of protein for CAT-2 and y+LAT-1 (p < 0.05), while reduced protein expression of CAT-1. And NOS inhibition markedly decreased the activation of mammalian target of rapamycin (mTOR) and PI3K-Akt pathways by Arginine in the IPEC-1 cells (p < 0.05). Taken together, these data suggest that inhibition of NO pathway by L-NAME induces a negative feedback increasing of Arginine uptake and CAT-2 and y+LAT-1 protein expression, but promotes cell apoptosis which involved inhibiting the activation of mTOR and PI3K-Akt pathways.

Arginine is also a substrate for endothelial nitric oxide synthase (eNOS) to produce the important vasoprotective molecule nitric oxide (NO) to regulate vital metabolic pathways [10]. NO plays great roles in regulation of arginine in growth and proliferation of intestinal porcine epithelial cell (IPEC). Arginine could stimulate cell migration via a mechanism requiring NO and phosphorylation of p70 S6 kinase [11]. Further study determined that the arginine-mediated activation of protein synthesis and mTOR pathway is independent on NO [12]. However, the effects of L-Arginine-NO pathway in the proliferation of cell, the expression of arginine transporters and the activation of mTOR signaling pathway have not been well characterized.

We hypothesized that NO pathway might play an important role in the regulation of Arginine utilization and cell growth in the intestinal porcine epithelial cells (IPEC-1). The present study was designed to test this hypothesis using L-NAME to inhibit L-Arginine-NO pathway. 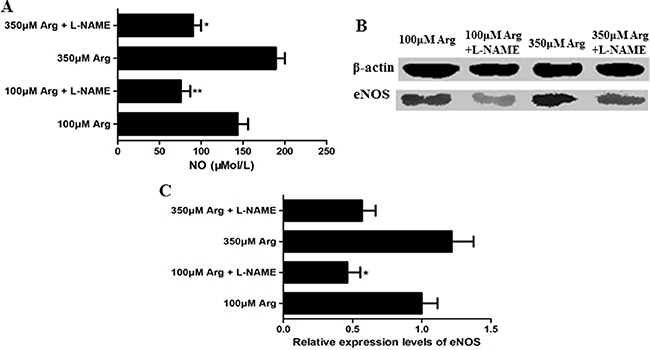 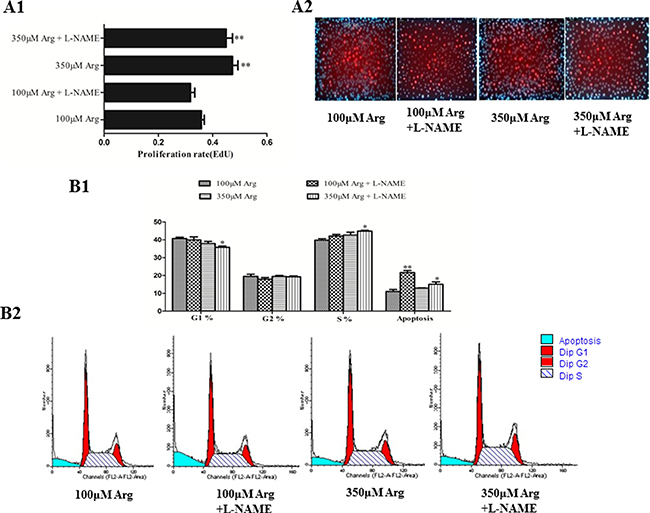 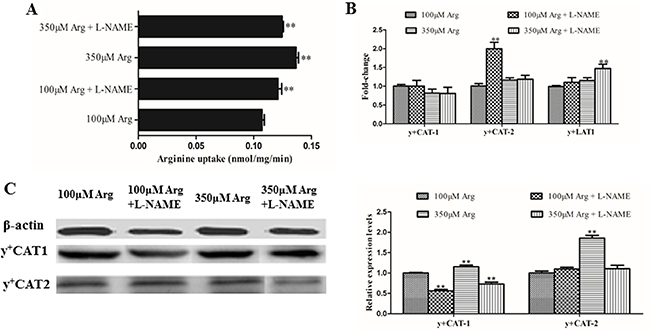 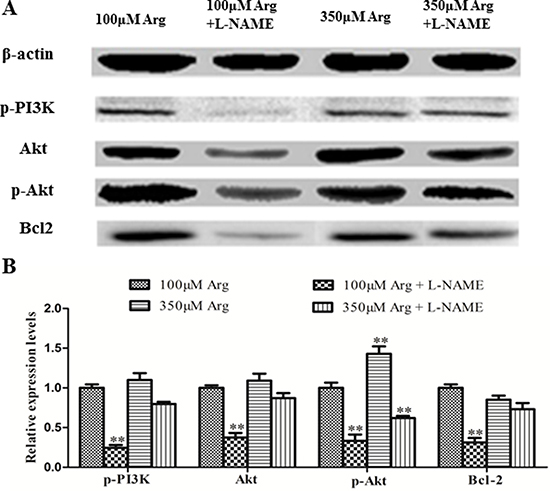 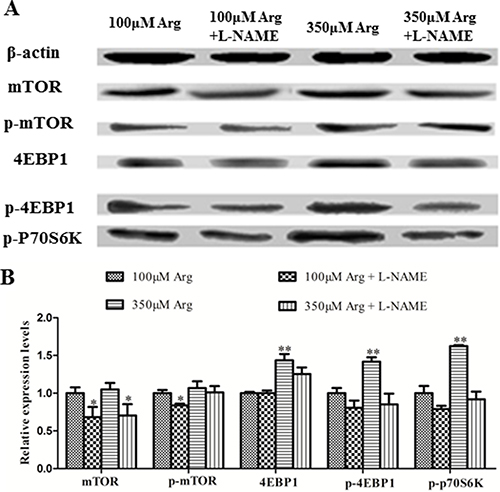 As an indispensable amino acid in almost all neonatal mammals, arginine has an important role in intestinal physiology and somatic growth [13]. Our previous study found that elevated arginine concentrations enhanced DNA synthesis, cell-cycle progression, and mitochondrial bioenergetics in LPS-treated intestinal epithelial cells through mechanisms involving activation of the PI3K-Akt pathway [14]. And Arginine supplementation could decrease expression of the proteins for NF-κB, MAPK, and PI3K-Akt signaling pathways but activated p38 and c-Jun N-terminal protein kinase in the jejunum and the ileum [15]. Lenaerts et al. reported that arginine regulated the expression of proteins of proliferation and apoptosis in Caco-2 cells [16]. Our results showed that Arginine could markedly promote the proliferative capacity of IPEC-1 cells, while addition of L-NAME has no effect on DNA synthesis and cell cycle. Moreover, phosphatidyl inositol 3-kinase (PI3K) and Akt are both well-known upstream regulators of the mTOR signaling pathway in mammalian cells [17], and the PI3K/Akt pathway provides essential signaling for cell survival and proliferation. The BCL-2 family of proteins are both pro- as well as anti-apoptotic molecules and BCL-2 is an anti-apoptotic molecule [18]. Previous study showed that long term overproduction of NO released from arginine could enhance apoptosis by activating the caspase family proteases, producing the release of mitochondrial cytochrome c [19]. According to our flow cytometry results, L-NAME may induce the cell apoptosis. Then relative protein expressions were suggested that L-NAME might induce the cell apoptosis via inhibiting the PI3K-Akt-Bcl2 pathway.

Although arginine synthesis in adult swine is through the intestinal-renal axis, the neonatal intestine contains all the enzymes necessary to synthesize and transport arginine [20]. Arginine transport involves the system y+ (a high-affinity, Na+-independent transporter, CAT-1, CAT-2, CAT-3, CAT-4) and Na-dependent transporters (e.g., b0,+, B0,+, and y+L) in a cell-specific manner [21]. For intestinal epithelial cells, 70% Arginine is transported through the system y+. In this study, we found that increasing arginine and addition of L-NAME could both promote Arginine uptake. In order to research the regulatory mechanism, relative arginine transporters were determined. It reported that arginine uptake could been increased by activation of the inducible NOS (iNOS), associated with upregulation of CAT-2 in rats. And aortic arginine uptake is attenuated by inhibiting eNOS in hypercholesterolemic rats [22]. According to this present study, addition of L-NAME was found to increase the expressions of CAT-2 and y+LAT-1, suggesting that L-NAME might increase arginine influx via increasing the the expressions of CAT-2 and y+LAT-1.

To verify whether arginine directly increase the activation of mTOR signaling pathways and the interaction of arginine uptake and mTOR pathway, the relative protein was determined. Ban et al. and Rhoads et al. found that arginine could activate mTOR signaling pathways in intestinal epithelial cells [8, 23]. Tan et al. reported that Arginine could increase the expressions of phosphorylation of mTOR, S6K1 and 4EBP1 in IPEC-1 cells [3]. The present study shows that Arginine promotes the expressions of mTOR signaling pathways proteins, which is consistent with the previous study, and addition of L-NAME reduces the relative protein expressions of mTOR pathway. The previous study found that Arginine showed the relative increase (42.2%) in intracellular pools by inhibiting mTOR [24]. Visigalli et al. found that rapamycin would stimulate arginine influx through CAT2 transporters and mTOR activity might be associated with the repression of CAT2 expression at mRNA and protein level [25]. In our study, L-NAME could inhibit mTOR pathway, suggesting that L-NAME might promote the expressions of y+CAT-2 by inhibiting mTOR pathway

In conclusion, these findings indicated that Arginine-NO pathway could regulate cell growth and proliferation by inhibiting mTOR pathway and promoting PI3K-Akt-Bcl2 pathway and increase arginine influx via increasing the expressions of CAT-2 and y+LAT-1. These effects depended on the concentration of aginine supplementation. These results provide effective theoretical basis of Arginine application in piglets nutrition and also provide reference for using Arginine to remedy human intestinal disease.

The cells were handled and fixed for flow cytometry essentially as described earlier [26]. Briefly, about 1 × 106 cells were pelleted at 16 000 × g for 5 min. The supernatant was removed and 1 ml of 70% cold ethanol was slowly added during vigorous mixing. Samples were stored at 4°C. Samples were washed with PBS and resuspended in PBS containing 150 μg/ml RNase A. DNA was stained with 50 μg/ml propidium iodide for 1 h at room temperature. DNA content was then analyzed by FACS analysis on a Becton Dickinson FACSCanto.

After a 4-day period of culture, the medium was removed and the cells were rinsed three times with “transport buffer” (37°C) comprised of 137 mmol/L choline Cl, 10 mmol/L HEPES/Tris buffer (pH 7.4), 4.7 mmol/L KCl, 1.2 mmol/L MgSO4, 1.2 mmol/L KH2PO4, 2.5 mmol/L CaCl2. Transport was initiated by simultaneously adding 1 ml of this buffer also containing L-[3H] arginineinine (2 μCi/ml, 5 μmol/L) into each transport well (24 wells/plate). Cell culture plates were continuously shaken by an orbital shaker (1 Hz) during the 5 minutes uptake period. Uptake was arrested by discarding the transport buffer and washing cells three times with ice-cold transport buffer lacking 3H-labeled substrate. The 3H radioactivity, extracted from the cells with 0.5 ml 1N NaOH and neutralized with 0.25 ml of acetic acid, was assayed by liquid scintillation spectrometry. Protein in the NaOH extract was measured using the BCA method. Arginine uptake rates are expressed as nmoles of Arginine per minute per milligram of cell protein.

The protocol of total RNA extraction, quantification, cDNA synthesis and real-time PCR was adapted from the method of Li et al. [27 and 29]. Briefly, total RNA was isolated from cell samples by using the Trizol method. Real time PCR was carried out by using forward and reverse primers (Table 1) to amplify the target genes. For quantification, amplification efficiencies curves were constructed from serial 1:2 dilutions, and the 2−ΔΔCT (ΔΔCT ={Ct(target)-Ct(relevant 18s or β-actin )}- ΔCt (average of control group)) method was used to calculate the mRNA expression of the target genes relative to housekeeping gene (β-actin or 18S).